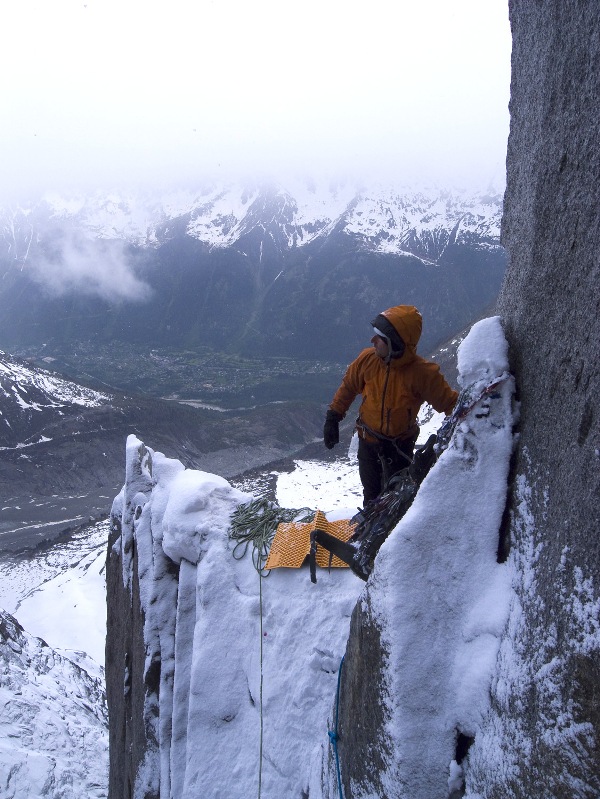 Writer, photographer and Patagonia ambassador, Jonny Copp — Jonny is also the founder of the Boulder Adventure Film Festival and Dirt Days — sent us this story about his recent travels through Europe with Micah Dash.

Had the Tibetans not rioted, Micah Dash and I would have been caught in the epicenter of an earthquake that killed over 10,000 people this May. I’ve been learning more and more that timing is everything. And when I start to disbelieve what I’ve learned, another incident occurs to drive home the lessons.

Micah and I had planned to attempt a new route this spring in a remote region of Tibet, heading after this soaring unclimbed line that inspired us. We were fired up. But by April the Chinese Government refused to grant Micah and I our permit to climb in the region due to discord on the Tibetan front. The Olympics, essentially, were getting in the way too because of the increased media exposure.

We had the time and the psyche, so we had to head out. We ended up in the Alps. And from day ONE in Europe we had amazing serendipitous meetings, close calls in the mountains, great food, wine and cheer in towns, and even though it was the worst May for weather in 7 years, we climbed almost everyday – sometimes while it was snowing on alpine routes or while it was raining on overhanging limestone (no worries!).

The low point (otherwise known as the high point) of our trip was part way up the West Face of the Petit Drus. A new route on the feared face was our main objective. It’s feared because 8 years ago half of the mountain fell off lifting a dust cloud that rose and floated from France to England. This major collapse of the wall’s infrastructure was seen by all in the Chamonix Valley, and the face has had few visitors since.

The wall wasn’t as scary as its reputation (as is usually the case). Nevertheless, it was a full alpine adventure with thin ice corners, steep, gloves-off rock climbing, crazy weather, and a tiiiiiiny leeetle bivouac site perched on the edge of a gendarme. It snowed that night as the storm moved in, and we didn’t sleep due to the cold and spindrift. That was our high point, or low point depending on perspective.

After reaching the base of Le Drus, we pulled the ropes from the final rappel anchor (two pitons pounded upward into a flake) and began to dump our gear into a heap in the warming snow. We unclipped and freed ourselves of ice axes, slings, screws, cams, stoppers, a pack full of bivouac gear including two light sleeping bags (a bit too light turns out), a micro-light tent, a stove and other items that kept us comfortable enough on our foray onto the West Face of Le Drus. That final rappel and pull is always a relief and this case was no different. It had taken us most of the day to descend in the storm, and most of the night before to decide that continuing upward was not an option, shivering in the blowing spindrift as our hand-cracks filled with snow.

The ropes slipped from the final anchor. Finally grounded, Micah and I grunted a few words of relief and anticipation.

“I’m so ****ing psyched to be down right now! Can’t wait for a beer and some stinky French cheese.” Micah said.

Just then, as if the mountain sensed our waning presence and wanted to keep us in the game just a bit longer, a “craaaack” issued from above. We turned our heads, craning our necks up the snow cone we’d just rappelled, and saw two bus sized blocks of ice rolling towards us. Half of the bergschrund had collapsed and we were suddenly in its direct path.

I turned and ran as fast as my crampon-clad feet could in the slushy snow, aiming myself across a depression and up another massive snow cone. As I gained elevation I glanced back for Micah and saw a massive hunk of the debris clip his feet as he flew through the air in a running, flying, flipping lurch. Then, within a second, all had come to rest. We were both on the surface.

“That was a bit too much like Indiana Jones and the Temple of Doom,” I said.

Both of our ropes were wrapped around and stretched to the breaking point between the many blocks of ice, like spaghetti around meatballs. At that point we decided to just get the hell out of there. So we did, pretty much running all the way back to the Montenvers cog train and Chamonix proper.

We did get our beer and stinky cheese, and then we “waited” for the horrible weather season to improve by heading out for some slightly safer objectives: limestone sport climbing, wine sampling, music festivals, granite bouldering, castle storming, lake swimming, mountain running and hanging out with cute girls!

“Uhm, dood, this is a bit different than base camp in Pakistan,” Micah said at one point. 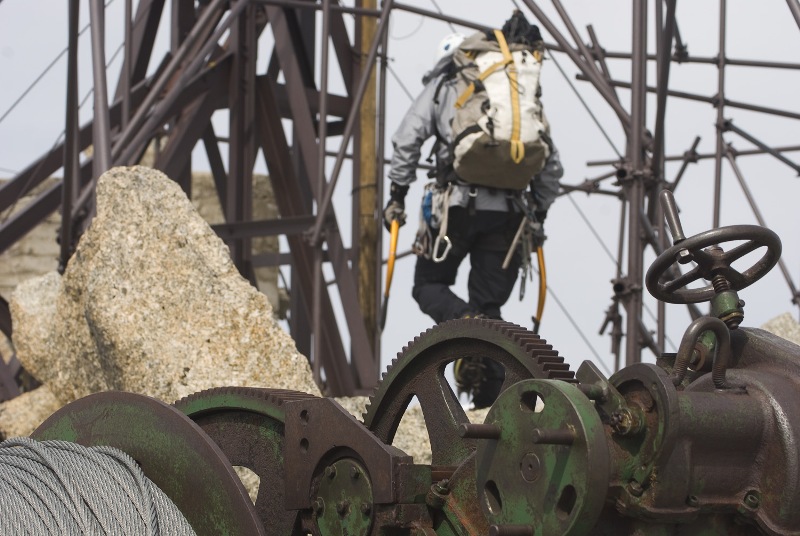 Instead of giving up after the the denial of their climbing permit for Tibet, Jonny and Micah set the gears in motion and headed for Chamonix.

Looking up at Petit Drus. 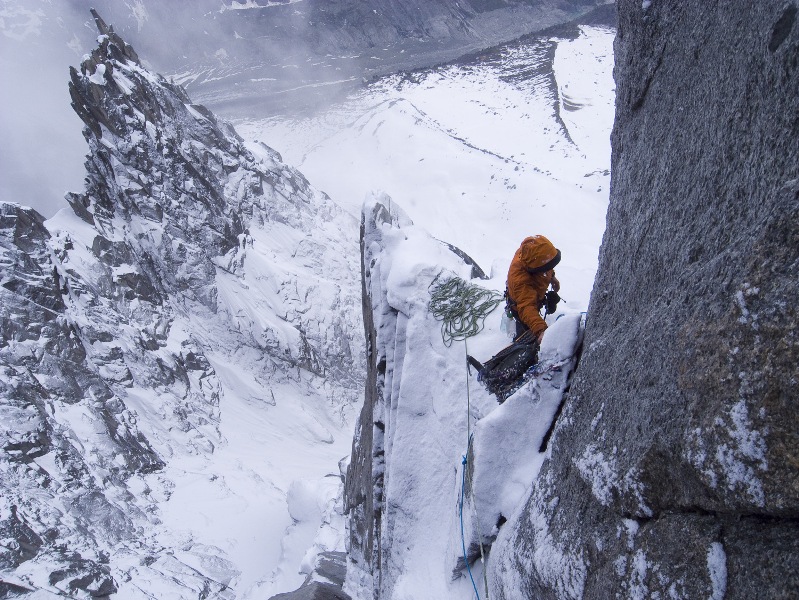 The “tiiiiiiny leeetle bivouac site” on the Drus. 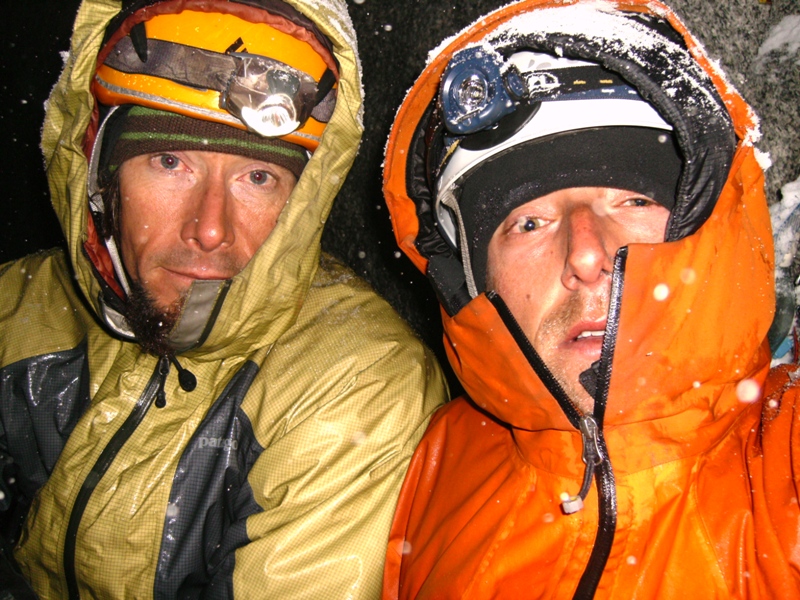 The high point of the trip: not sleeping on the Drus due to the cold and spindrift. 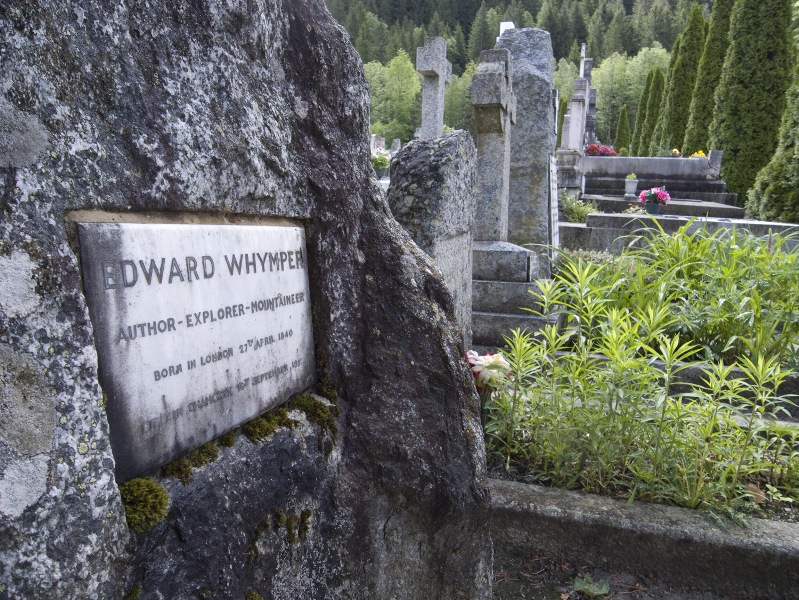 Visiting the grave of Edward Whymper who made the first ascent of the Matterhorn in 1865.

Jonny also put together a video of the trip. If you’re easily offended, please take a pass on this one. Otherwise, enjoy the sights and sounds of Europe:

For more on Jonny Copp, check out his previous TCL post about climbing Shafat Fortress in Kashmir, India. You can also visit his Web site – coppworks.com – to see a bunch of Jonny’s photos, read his published articles and check out his blog. Keep an eye on boulderadventurefilm.com for updates on this year’s Boulder Adventure Film Festival, November 6-8, 2008 in beautiful Boulder, Colorado.