I don’t really set concrete goals. In fact, I find it best to have no goals whatsoever; that way I won’t be disappointed if I don’t reach them.

Hopefully some hiking by mid-summer, and some easy climbs by fall.

Seriously, for me the goals are more of a process than an end point. Cliché, I know. But it’s weird how I can have certain ambitions or goals, and once I reach them I’ll allow a moment of satisfaction and enjoy a marg, but mostly I want to move on.

I want to run again. Even just a little.

The long grind of recovery. Mental, physical, emotional. Sometimes it’s like the mind games I play with myself in training, when I’m trying to push myself to become better. The little voice that’s always there, sometimes taunting, sometimes encouraging, that helps drive me.

I’m psyched, so grateful, I should be happy. I am happy. But content? Sometimes. . . . The other day that little voice hit me: OK, dude, time to try to run. Just five minutes.

I tied my shoes and walked to the trail. 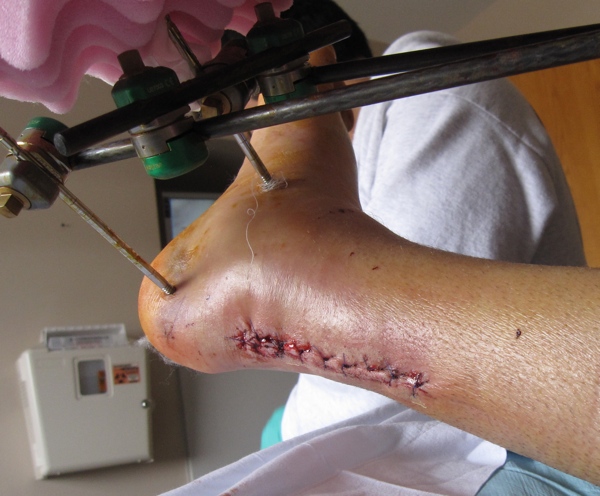 Since breaking my leg I hadn’t run more than 100 yards, and it was a pathetic, peg-leg gimpy hundred yards.

Only two more minutes, cool, this was a good start. Baby steps.

You have to know when it’s wise to stop, smart to retreat, better to quit than to continue. Injury, overtraining, harm and death tend to be quite disadvantageous to one’s goals.

Most often, though, I think – I know – most people quit way too early. I do it, too. We make excuses for ourselves, nurture our inner child or whatever, cuddle up with a half-gallon of fudge ice cream and tell ourselves it’s OK.

Ten, yes, I feel good – and before I know it it’s 11 minutes, so might as well do 15, yeah, c’mon, that’s only an extra five minutes, breathe, stay light, you’re OK, you waste five minutes in an hour on Facebook you lazy bastard.

People say fear is a bad thing; I think it’s a good thing. “It’s all good, brah,” works for me only when ambition doesn’t matter. I’m terrified of losing the ability to do what I love.

At 15 I’m too far from the trailhead, got a hitch in my stride at some moments. Of course I do, I have a broken leg but quit thinking it’s OK, OK, OK, keep moving, breathe, yes, other moments feel like magic…

Doing extra helps drive the body and mind, even though something like a short run, or just one more pitch at the end of the day, means nothing in itself. It still means something.

OK, here comes the trailhead, it’ll be like 17-something, sweet! But at 17:40: Another 2:20 and it’ll be the most badass thing I’ve done in awhile. Never run again, never run again.

Trailhead, 20:10. I cool-down with a walk around the block, gimping just a little, smiling the whole time.

That’s nothing, dude, and you know it.

Yes, I know. It was just a five-minute run. Next time I’ll try for ten.