Editor’s note: For Fathers’ Day 2010, we asked readers to Tell Us About Your Rad Dad. We received lots of great photos and short stories about dads who have done all kinds of cool things with their kids. George Gess’s story caught us by surprise. The third in our series of submissions (the first two posts are available here: 1 and 2), George’s story invited us to have another think on what makes a dad truly rad. We hope you enjoy it as much as we do. Here’s George: 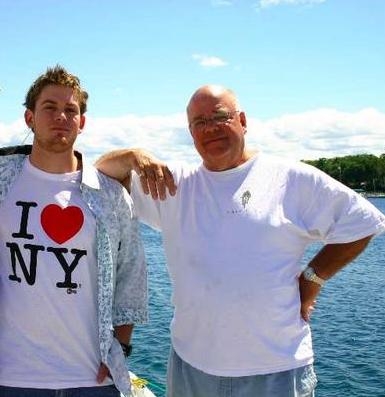 I have always thought of my dad as “rad.” Not really because of what he did, but just because he was my dad. The Man. The guy that made what I wanted to do while I was growing up possible. Be it little league baseball, soccer, basketball camp or backpacking trips, he was the one that made it happen. He was always there for me; always on the sidelines, always in the crowd, always a postcard away. I had a lot of great times growing up, and I have him to thank.

My dad was an attorney in northwest Ohio. His name is Tom Gess. A few years after making partner in the law firm that he was with, he began doing pro-bono legal work for a land trust called the Black Swamp Conservancy. The goal of the conservancy was to protect the land in the Black Swamp from deterioration and development, thus preserving the natural habitat for local wildlife. Shortly after providing legal counsel for the BSC, he became board-member and President of the entire outfit. When he was home at night, he was spending time with the family. When he wasn’t  at home, he was giving his time to the environment. Not for profit, but because he loved it. That’s pretty Rad.

My dad never really talked to me about what he did throughout the day. He was always more interested in what I was doing. Because he never spoke of his work, I never really knew a whole lot about it. I knew he was a lawyer, and I knew he went to meetings for The Black Swamp. Other than that, I couldn’t tell you a thing about his work. It wasn’t until I lost him to a sudden heart attack in 2007 that I truly knew who he was.

Don’t get me wrong, I knew him, he was my dad after all, but I had no clue what he was up to behind the scenes. It wasn’t until I spoke with his colleagues from the firm and the conservancy that I truly knew who he was and what he was up to. He was a leader, a president, a guy who led with a gentle voice and true love for his surroundings. His efforts (along with those of the rest of the conservancy members) helped to support and restore thousands of acres of wetlands and inspired those he worked with to do the same. I was completely blown away after meeting all of the people that were touched by his work. They all spoke such kind words, all about a man that in some respects I was just getting to know. How amazing to find out that my old man was even radder than I thought!

I was 25 when he passed. My life had taken a turn for the worse a few years earlier and I was on the cusp of starting over with a fresh, clean bill of health and state of mind. He pushed me to seek treatment and I did. It saved my life.

When he was still around, we had a dream of going to a sailing school in Maryland. Sailing was always something that he wanted to do, but just couldn’t find the time. We also spent time every summer in Northern Michigan, where he always wanted to have a home. I am happy to say that when he passed I was (and still am) living in that small town in Northern Michigan, and since his passing, have began crewing part-time on a 36′ sailboat. A few days ago, I played a role as a supporting guide on a kayak tour put on by the local conservancy.

I wouldn’t have dreamed of doing any of this stuff if it wasn’t for him. Nor would I have been able to. It’s almost as if his dreams have become mine. And what great dreams to have. I find it funny that in my rebellious younger years I didn’t think that I would be anything like my parents. Nowadays, I want nothing more than to be just like my dad. I just hope I’m Rad enough.