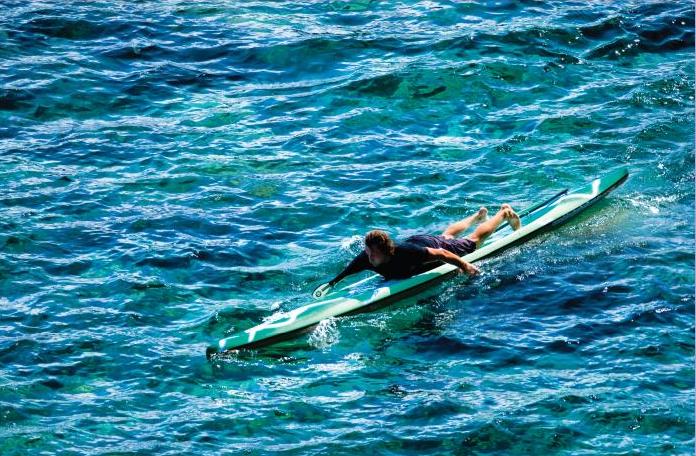 It's the cocoon of night that brings total escape. Escape from all that my eyes can be distracted by. Because after all, I do this for its simplicity: to surround myself with only the sea, a craft and my heartbeat. It's not that paddleboarding by day is so bad it just seems to reach a higher level of purity at night with my strongest sense muted.

I began paddleboarding in order to keep the edge. Having only one arm I am forced to stay as sharp as a tack in order to simply catch the waves I seek to ride. Growing up in Maine where the sun sets early in winter, our prime wave season, I was forced to embrace the night in my mission to stay fit, to ride waves. Through necessity I was awakened to another level of joy from the paddling experience.

My launching point back East led to a cold body of water that boasts the second highest tidal flow in the Western Hemisphere. It is a powerful tidal river that leads to the Atlantic Ocean and is a major shipping channel supporting communities that were established in the 1600s. This body of water also is home to a nuclear sub base. A hulking mass of steel and sinister shapes that lies menacingly on the shore that I frequently paddle by. Post-9/11 anxiety has led to entertaining encounters with the keepers of the “peace” who patrol the bases aquatic perimeter. Slipping in and out of the shadows and swirling black current I am always keeping an eye out for fast moving vessels that represent a certain level of threat given that I paddle without a light.

One evening a rapidly moving light on the river caught my eye and then seemed to lock in on me. Yes, it's now coming straight at me, and fast. I plot my escape: I’ll bail off my board in a timed manner and swim down to avoid the potential for further dismemberment. How will I paddle with no arms? Hmmmmm. The light slows as it nears suggesting that these boys know their stuff and must be assisted by technology not available to the average Joe. This can only be one boat. It's the Navy Special Forces on patrol. As they cruise up to my craft I sit up and say howdy. And with my sarcasm respectfully stowed away, ask them, “What's up? Is there any way I can help you?”

Yep, it's the squids and they look annoyed that someone would be slipping around mid February in the dead of night on “their” river. They train a veritable laser beam of light on me and ask me what I'm doing. I say, “I'm paddleboarding, it’s kind of like going for a jog only I use my arms.”

I think it was at this point that they realized I was sporting some kind of funny flipper on one arm. A potential weapon perhaps? One of them begins to mumble something about base security and my safety and the other just stares at me with his mouth open. “Goodnight,” I say as he continues to mumble and I stroke out of the boats piercing light and back into the freedom of darkness.

The following summer while enjoying a leisurely paddle on the same river by day, I passed under one of the bridges that link the island the sub base sits on to the mainland. I noticed a large very gruff looking man in a uniform standing on the bridge staring down at me from above. He was looking right into my eyes as I passed under, so once I reached the other side I sat up and looked back. He was half smiling and said in a booming voice, “So I finally meet the one-armed aqua man who paddles in the dead of night, the man who keeps my security detail on edge with his frequent expeditions around our base.”

I smiled back and said, “Just trying to stay sharp sir,” sarcasm stowed once again. He looked at me even harder, square in the eyes, hesitated for a moment and then thanked me for keeping his men on their game and to keep up the good work. I smiled and without a word moved on thinking to myself that I need to cut down on the amount of time I spend in the water by day.

I now live in Santa Cruz, California. The necessity to paddle at night is not as present here, however I do make a point to maintain the tradition. Only in these dark waters it's not fast moving boats with hardened men aboard that lay in the back of my mind as I slip into darkness. This seascape offers its own highly evolved aquatic security force, one of a toothy nature and not prone to smiling in its discourse with humans. But it's okay. After all, I'm really alone aren't I? It's just me, a craft, darkness and a heartbeat.

When Jeff is not in the ocean chasing waves he can be found at the helm of a water tender truck helping to fight wildfires throughout the state of California. Check out his business 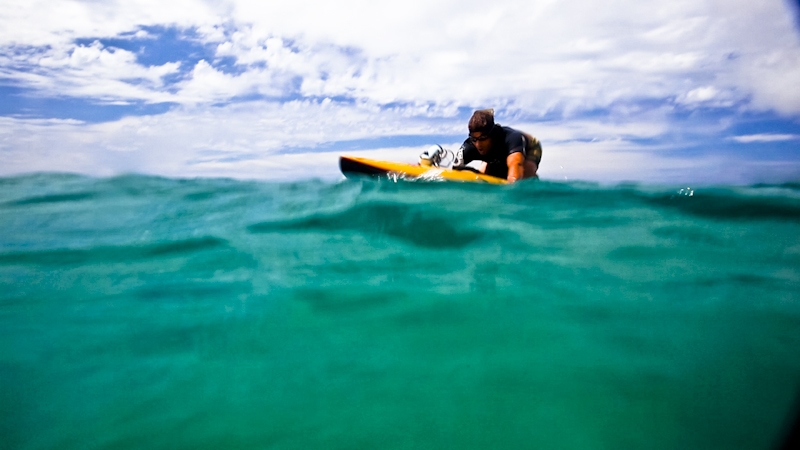 [Jeff digs in for the long haul. Photo: Tim Davis]