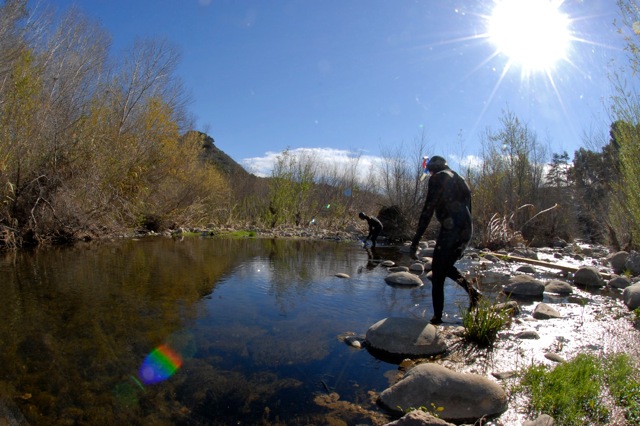 Taking the plunge (albeit it a shallow one) into the Ventura River in the spirit of Our Common Waters, Patagonia’s new environmental campaign, Patagonia editor Jim Little and a couple of friends spent the afternoon snorkeling for endangered southern steelhead trout. Along the way they sneak up on a few fish and discuss why the once plentiful animal is having such a rough go of it. Above: Into the river in search of steelhead. Photo: Matt Stoecker.

The plan was to take a couple hours out of the workday to grab lunch at a taqueria and go snorkel the Ventura River looking for southern steelhead trout. It was late January, with 80-degree temps, light offshore winds and knowledgeable comrades: fish biologist Matt Stoecker and Ventura watershed watchdog Paul Jenkin.

Burritos (and fish tacos) in bellies, snorkel and camera gear in hand, we hit three pools looking hard for a now-scarce fish that once flashed the river in the thousands. When the steelhead ran back in the 1920s, Ventura’s public schools closed so kids could go fishing. But 90 years later, as we dragged ourselves through mossy waters trying not to swallow a single drop for fear of some gut-bending bug, I learned why the endangered southern steelhead are now so few. 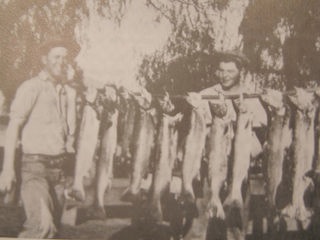 Back in the Good Old Days, the Peirano Brothers and others pulled lots of steelhead out of the Ventura River, 1920s. Photo: Patagonia Archives

Southern steelhead are migratory fish born in freshwater. As juveniles, they swim for the ocean. If they survive the predators awaiting them downstream, they either get big and fat, or eaten by something bigger and fatter once they’re in the Pacific. The ones that survive return to their native pools after a couple of years to spawn. Doing all of that requires a river without walls and a decent flow of fresh water, a commodity in great demand and short supply these days in the Ventura River watershed. The reasons are many, and they’re not exclusive to the Ventura River. 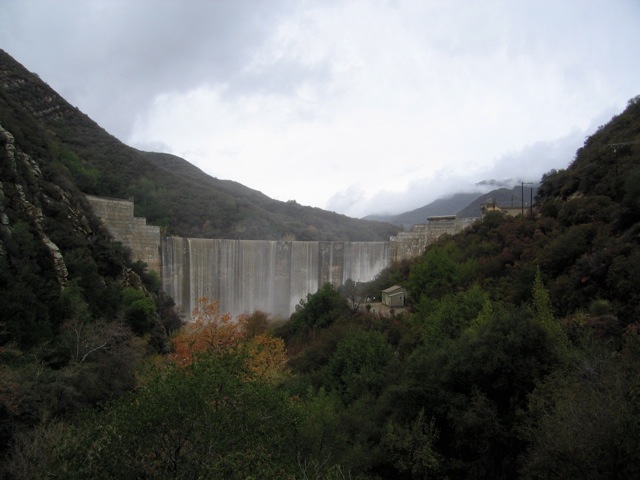 A major obstacle to spawning steelhead, Matilija Dam is filled with sediment and serves no useful purpose. Photo: Jim Little

Starting 16 miles inland, the obsolete 168-foot high Matilija Dam blocks the now-endangered steelhead from a broad swath of its historic spawning grounds and robs Ventura beaches of sand. The aging wall of concrete is slated for removal some day, if there’s still money and ever agreement as to how to do it.

Nearby, excavation at the Ojai Rock Quarry clogs the North Fork of Matilija Creek with rocks and soil that further chokes upstream migration. The county buys rock from the quarry, and has been known to look the other way when it blocks the creek.

Next comes the start of many thirsty citrus and avocado orchards that suck up groundwater, which draws down river water. When the wellhead pumps go on during the summer, swimming holes have gone dry over night.

The Robles Diversion Dam is next, redirecting water from the Ventura River into Casitas reservoir, upon which many depend. Casitas Municipal Water District, which owns the diversion, sued the federal government in 2005 for taking “its” water to help steelhead survive. The landmark case is yet to be resolved, but it could seriously endanger the Endangered Species Act. So much for the steelhead. 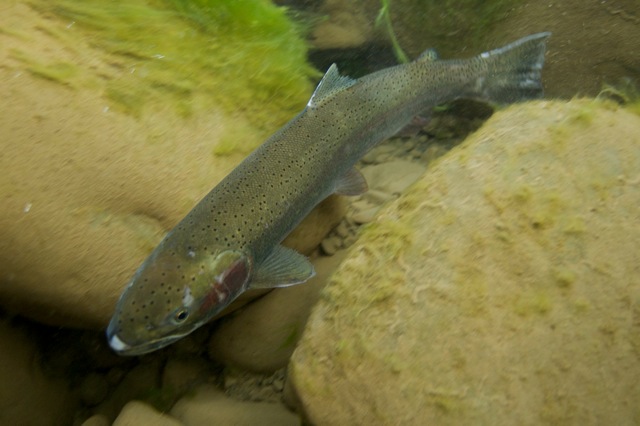 An adult steelhead – one of only two seen during the group’s dive of the watershed. Photo: Matt Stoecker

Then at Foster Park there are several more wells, these owned by the City of Ventura, which is now talking about permitting a canyon full of executive McMansions that would presumably gulp more water from the river.

Approaching the ocean at last, we come to the ever-expanding Taylor Ranch, which siphons off more and more water as it brings more acreage under cultivation. It just acquired another tract of land down in the floodplain, one that was coveted for its conservation values.

If not for the Ojai Sanitary District Wastewater Treatment Plant, a facility that pumps treated effluent back into the lower river, the trickle that was once the vital Ventura River might well run dry in years of drought. But the impacts of this treated water on the river, lagoon and wildlife are unclear.

Despite all odds, a few hardy southern steelhead somehow hold on. We actually saw a few. 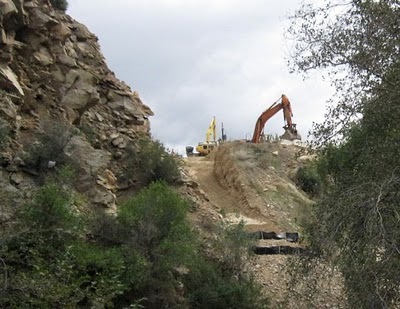 Rock slides from the Ojai quarry in the North Fork of Matilija Creek are another impediment to spawning fish. Photo: Paul Jenkin 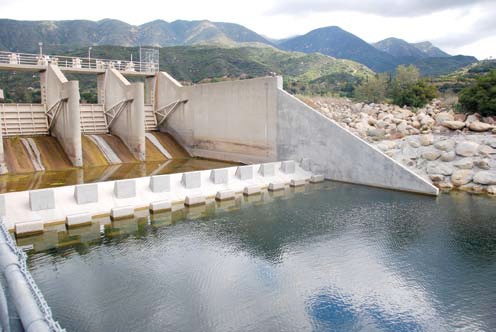 The Robles Diversion Dam channels water from the Ventura River into Casitas reservoir. Its operators were made to build a fish ladder so steelhead could get around it, but then sued the federal government when required to release sufficient water for the steelhead to pass. Photo: NOAA 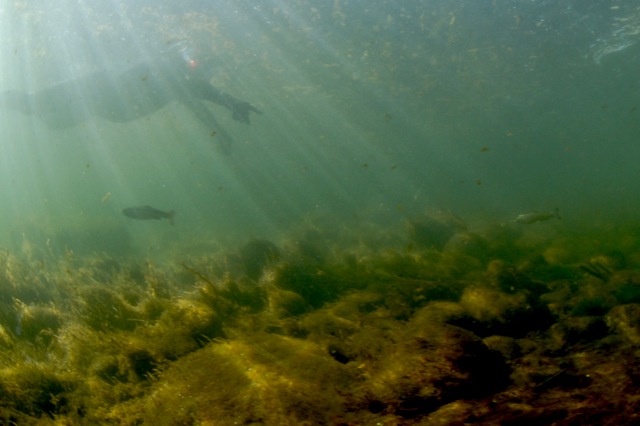 A couple of juveniles swim by. Photo: Matt Stoecker 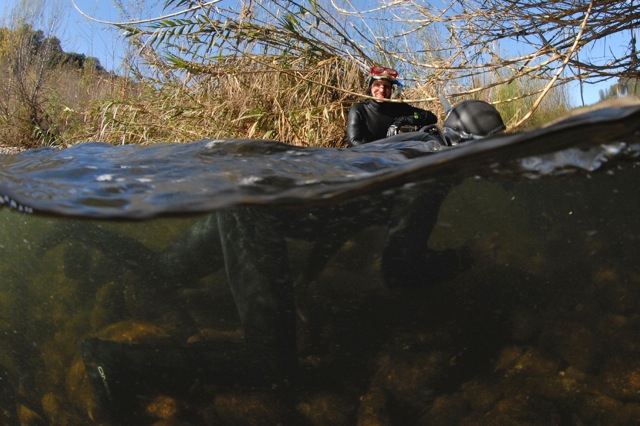 The river is full of non-native species, these snorkelers included. Giant reed (pictured here) grows everywhere and takes its share of water. There are also crawfish, carp, bullfrogs and other critters that prey on young steelhead. Photo: Matt Stoecker 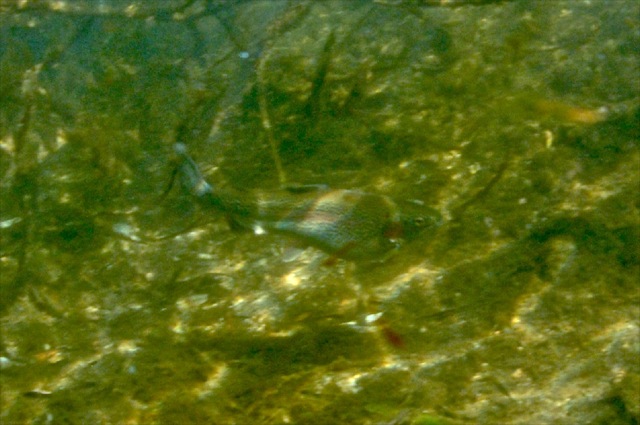 We spotted two adult steelhead on our outing. This one had a distended throat/belly – which is not typical. Photo: Matt Stoecker