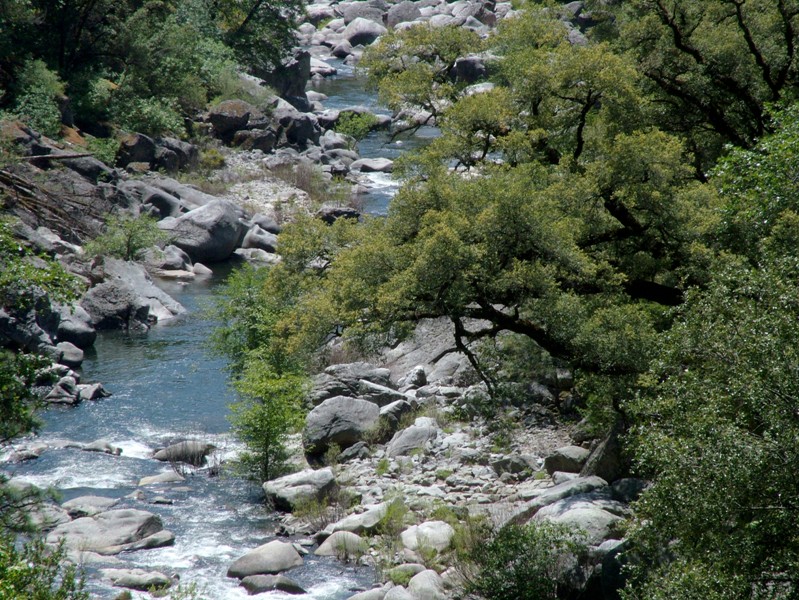 For years, my brother and I had to sneak into one of our favorite sections of our home river, the mighty Mokelumne. The land surrounding both sides of this section of the river is owned by the East Bay Municipal Utility District. They had big “No Trespassing” signs up along their barbed wire fences.

We, however, strongly considered the river to belong to everyone. So every once in a while we would float down through the rapids on inner tubes and stop in the beautiful and secluded pools to swim or try catch-and-release fly fishing. Along the way we’d check out the old miners’ trails and wild flowers, or stop at the ruins of the historic mining town of Middle Bar, or imagine we were Mewuk people catching Salmon in the river and admiring the giant blue oaks that produce so many acorns.

Because the land had been protected and this small river canyon was relatively secluded and seldom visited, it had also become a refuge for local wildlife. We could always count on seeing an eagle sitting above the river in one of the big cottonwood trees or the old Bull Pines. There were always ducks sitting on the pools that would fly around to the next bend as we would round the corner. Snakes, lizards, wild turkey, quail, deer, jackrabbits, raccoons and otters were all common sights along the rivers edge.

And, of course, there’s nothing better than some cold white water on a hot summer day. The tubing run ends at the old Middle Bar Bridge and the high water mark of Pardee Reservoir. Back then we used to have to sneak around a bit and throw our tubes over the barbed wire fence. These days there’s a parking lot and a take out that’s been built for kayakers and rafters.

But recently, the fate of this spot was hanging in the balance of California’s water politics.

The Mokelumne River flows from the high alpine peaks south of Lake Tahoe down through the foothills and to the San Joaquin Delta in the Central Valley. The river is the dividing line between Amador and Calaveras counties.

There are currently five dams and power houses along the Moke including Pardee Reservoir that supplies drinking water to the East Bay. In 2009, East Bay Municipal Utility District (MUD) announced its 2040 water plan that included a proposal to expand the Pardee Dam. The dam expansion would result in four more miles of flooding on the Moke including the entire Middle Bar run all the way up above State Highway 49. The last best riverside riparian habitat in this elevation of the Mokelumne would be lost forever along with the recreational opportunities it provides for the local community and habitat for fish and wildlife. And with it a piece of my heart that holds dear all the good memories of my childhood created along that stretch of river. 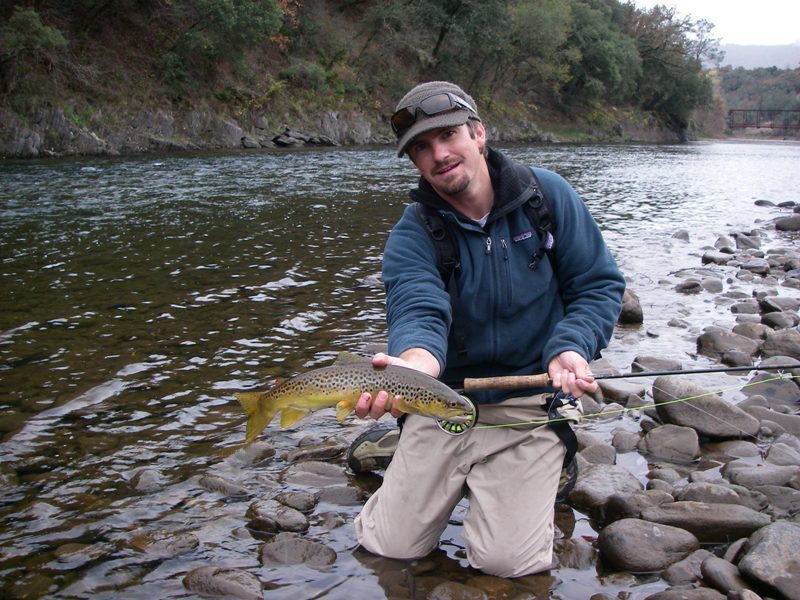 [The author kneels on the shore of his beloved Mokelumne.]

So as you can imagine the issue hit hard with me. I learned of some meetings being held by East Bay MUD to discuss the plan with the local community and that there would be a time for public comment. I have to admit I was a bit surprised to see how many people showed up to these meetings. They more than filled the entire room and were flooding out the doors and peaking in through the windows. I was among many people who stood up and shared memories of this place and asked that East Bay MUD please reconsider their decision to expand the dam, especially given that other, less destructive alternatives were proposed.

It was at these meetings that I met many other Amador and Calaveras County locals that were just as excited about the river as I was and also had a deep desire to protect this spot. Among them was the crew from O.A.R.S. rafting company including George Wendt. Also the crew from Friends of the River was there. And the very dedicated group from Amador County called the Foothill Conservancy. Together we hatched a plan to raise awareness about the issue and help rally the local community – as well as educate East Bay MUD customers down in the Bay Area who would otherwise be clueless about where their water is coming from and what was happening in our community in order for them to have it.

So the plan for this movie project was born.

Our strategy for saving this section of river included two parts. First and foremost, try and stop the immediate threat of the dam expansion. Second, secure lasting protection for all of the remaining free-flowing stretches of the Mokelumne River through a National Wild and Scenic designation.

I spent the next month filming throughout the entire watershed of the Moke, from the headwaters in the Mokelunme Wilderness all the way down to the delta. Along the way I came up with the concept of letting the true locals, the wildlife, have a say in the video as well since they were going to be even more directly affected than us. Meanwhile, the Foothill Conservancy was hard at work attending all meetings, rallying the community, filing lawsuits and collecting signatures for the Wild and Scenic petition.

Fast forward two years, and a lot has happened.

My short film screened in January at the Wild and Scenic Film Festival in Nevada City. Most of the films at this festival had an environmental twist. Almost all raised awareness about certain issues affecting our environment or society. Some offered solutions and others just pointed out the problems. As with most environmental problems these days, most of the movies didn’t have a happy ending. I was proud to get up on stage and say that our movie did.

It was recently announced that East Bay MUD has decided to drop the expansion of Pardee Dam from their 2040 water plan and seek other options for water storage including underwater aquifers. This action is a direct result of the efforts of the Foothill Conservancy and affiliates taking a stand for what they hold dear. The announcement was made following yet another costly lawsuit filed by the Foothill Conservancy against East Bay MUD concerning the environmental impact reports for the dam expansion. It was also a direct result of the public outcry to save this stretch of river, all the people who went to the meetings, signed petitions and wrote letters to East Bay MUD.

This is indeed a huge victory for the people of Amador and Calaveras counties. But the fight to save the Moke is not over. You can still help. Please take a moment to visit the Foothill Conservancy and sign our Wild and Scenic petition to insure long-term protection. Also, if you can, make a donation to this hard working organization that has been instrumental in helping protect the river as well as opening up more public access and recreational opportunities on the Moke and beyond. And please take a moment to attend a meeting or write a letter to East Bay MUD to let them know you respect and support their decision to drop the dam expansion from their 30-year water plan. Together we can save the places that make California so great.