The Footprint Chronicles were developed to document the changes we’re making as a company to lighten our environmental impact and do less harm. These chronicles are as much an inspiration to Patagonia employees as they are an outgrowth of our personal values. The “My Footprint” series shares the stories of Patagonia employees who have been inspired by the Chronicles, and whose inspiring lives help fuel the vision of what we can do as a company. 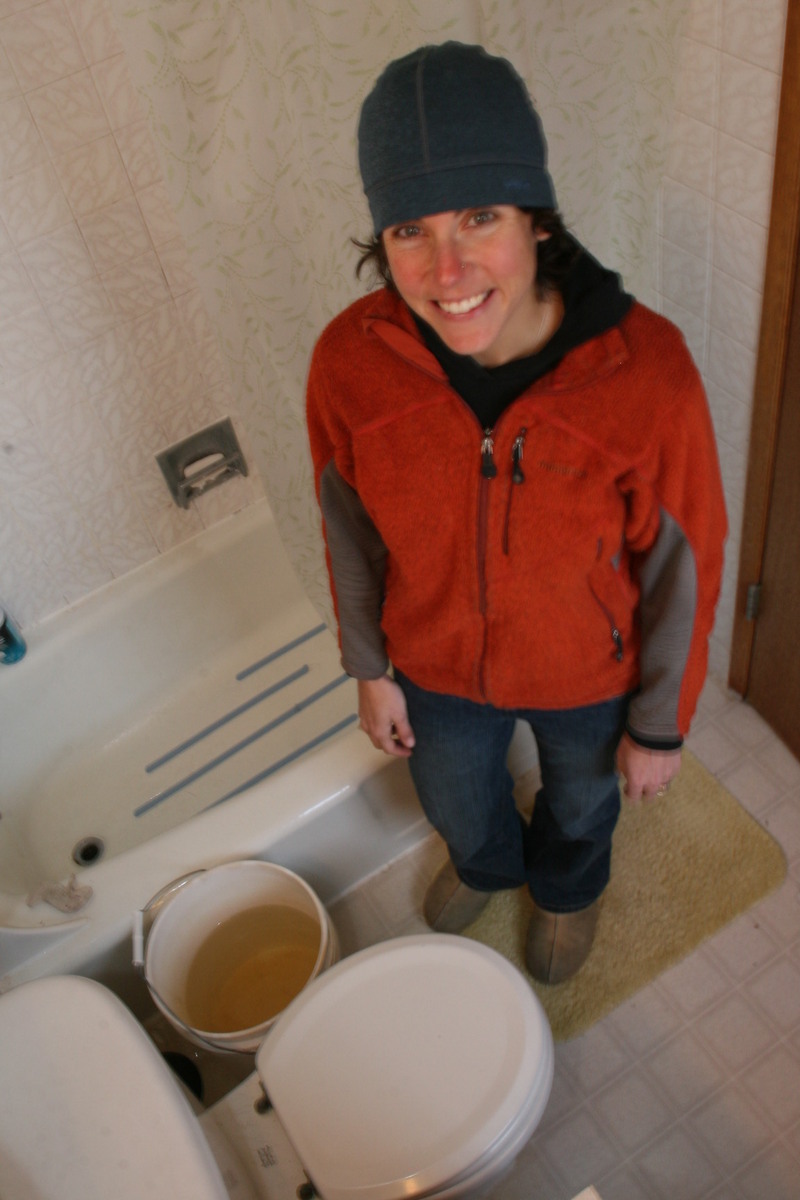 Ed note: The following contribution to the “My Footprint” series comes from regular Cleanest Line contributor, Fitz Cahall, of Dirtbag Diaries fame. While not a Patagonia employee, Fitz was too excited not to share. Enjoy reading his footprint, and remember to click the “About” section if interested in submitting your own.

Our hot water heater takes a while to get going. The first time we took a shower in our current home, we watched cold water pour out of the tap. We watched some more, testing the stream with outstretched fingers. Still cold. It took at least two or three minutes to reach lukewarm.

My wife, Becca, came up with the strategy, and then, because I am a well-trained husband, I religiously followed suit.

Becca found a five-gallon bucket and placed it beneath the faucet. If we lived in California or the Southwest where minimal garden doesn’t lack for rain water. We decided to simply use the collected water to flush the toilet.  It became habit – an easy, simple act of conservation, like composting or recycling. All that was required was ten extra seconds and a little effort. It became routine throughout the Winter and Spring.

Then Becca left for a summer of counting tiny songbirds in a distant forest. I was a bachelor reborn, capable of consuming canned beer in a single swill and leaving the toilet locked in the upright position. Still, the water recycling remained a part of the routine. 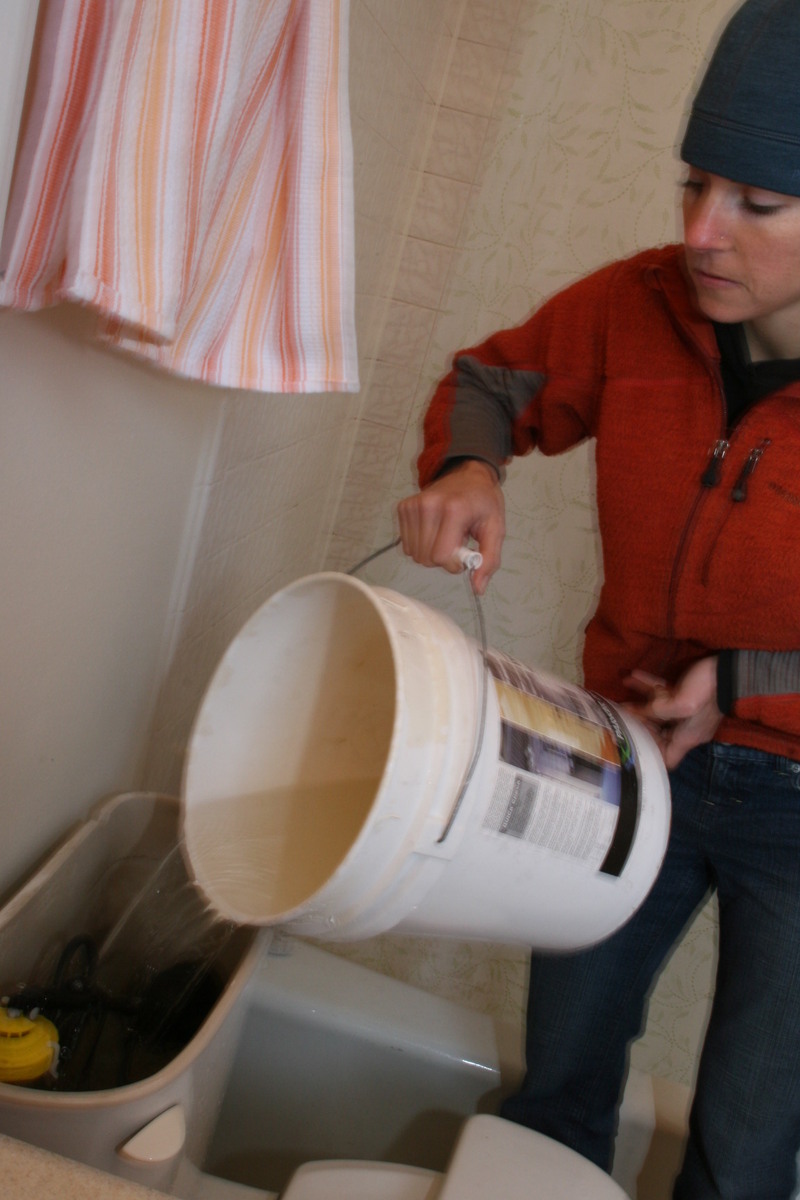 I’m generally happy, abuzz with ideas and the energy to see them into fruition, but I have always been haunted by a soft sadness, something akin to a cloud passing in front of the sun. I become slightly anxious, then lethargic and finally paralyzed by the simplest decisions. Usually, the feeling is gone in the morning. Sometimes it lingers for a day or two. This summer, the cloud set up shop.

I combated the cloud hovering over me with a jam-packed schedule. As the summer progressed, the self-created rigors – climbing, social life, volunteering, programming classes – I used to keep upright and efficient, began to fall away like poorly constructed scaffolding. I had to force myself to call friends, to get out of bed in the morning, to accomplish the day’s task rather than sit in the backyard and puzzle over Suduko until an acceptable beer-drinking hour. As a self-employed writer, I typically make myself shave every morning before work like I used to when I worked at a newspaper. This stopped. My hair grew, wiry and out of control. The barbershop was simply too far away. 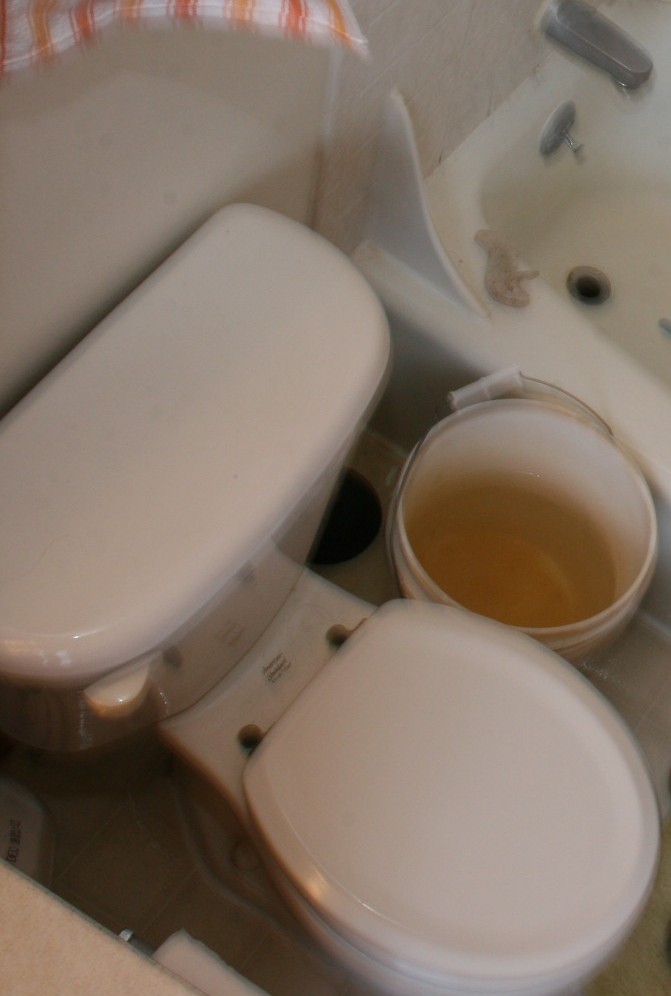 And then, I stopped flushing the toilet with the shower water. The ten seconds required to lift the lid from the toilet reservoir, to poor the bucket’s contents in and then replace the toilet’s lid was simply too much effort. The bucket waited full and patiently on the floor. It remained there.

I locked eyes with the toilet. It glared back with cool, unwavering porcelain demeanor.

“If you can’t do this, what makes you think you will accomplish anything?” the toilet asked, the lip of the seat curling in a snide manner. “How do you expect to have a positive impact, if you can’t take ten seconds to lift up my lid and dump some stale bathwater to refill the reservoir?”

“Fxxk you toilet,” I sneered back. “I’m not afraid to flush you and walk away.”

“How are you going find the energy to start a climbing program for at risk youth? Or drag your sorry ass up El Cap? Recast outdoor media as greener? If you can’t muster the will for this, how will you do it for anything else?”

The toilet was right.

“If you can’t do this,” I muttered into my home’s stillness. “What makes you think you can do anything?”

I opened the reservoir, set the ceramic top on the toilet seat, lifted the 30 pound bucket, flushed and then poured the water in as the reservoir refilled. Ten seconds and 2 gallons later, I was on my way.

Of the 300 or so days a year that Becca and I are home, we likely save 5 gallons a day. Calculated out, we save around 1,500 gallons of water a year. Utilities are included in our rent, so there is no monetary value to our efforts. Here in Western Washington, where summer rains water the backyard garden and massive snowpacks replenish reservoirs in the spring, this daily act is a symbolic one, a small daily prayer to efficiency. Conservation simply for conservation’s sake.

I’m not perfect. I will never be perfect. But every morning, as I draw water to shower and shave, I am forced to ask myself a question.

“Do you have the energy?”

It is as much a question about my ecological footprint as it is a survey of my well-being.

Later in the day I will mutter those words again. Do I have the energy to ride my bike instead of drive? To remember the canvas grocery bags? (I suck at this.)  To pull down the tools and swear, fume and bungle my way through some repair project instead of just buying a replacement? To resist eating beef even though I have a deep, long standing-love for hamburgers?

On the good days the answer is always “Yes.”

Top to bottom, Becca Cahall does the little things to save the environment and train her husband. Photos: Fitz Cahall