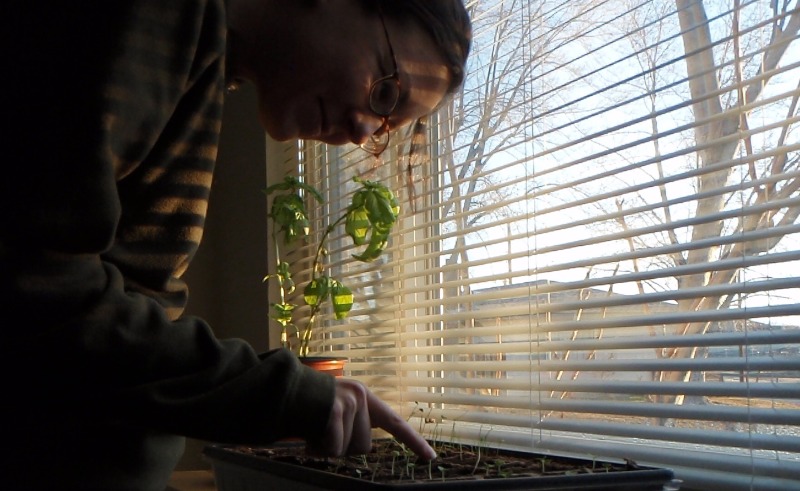 [Ed note: Everyone concerned with the state of the environment has their coming-of -consciousness story. Psychologist Elizabeth Mosco has worked for years on motivating people to make positive changes in their lives. Here, she turns the lens on herself. Her account of living with a "green" significant other, Patagonia Web Editor Mike Colpo, graciously offers some insights about her own transformation from eco-nightmare to composting queen. Enjoy reading about Dr. Mosco's footprint, and remember to click the "About" section if interested in submitting your own.]

When I first met the environmentalist in my life, I wasan eco-conscious individual’s nightmare. I remember him glancing in my trashcan as he threw something away and I cringed at the number of plastic bottlesand aluminum cans staring him in the face. He used to leave our empty winebottles on the counter of my kitchen, likely hoping a recycle bin wouldmaterialize for them, but I would just throw the bottles out when he left. Hewould use my fluoride-laden toothpaste in my bleach-scrubbed bathroom withpetroleum candles burning. He saw me make multiple car rides to the supermarket—wellwithin walking distance—for one or two items. He watched me exterminate allexcess veggie matter in the garbage disposal. Here was my new boyfriend,freshly back from four weeks in the wilderness and ready to go back to hisenviro-friendly job at Patagonia. And here wasme, wantonly creating waste without a thought in the world to do anything butchuck it in the trash can. Looking back, I am struck by one very simple thingMike did, something that has changed the way I look at waste,environmentally-friendly products, and life…he said nothing.

[Liz tending the season's first seedlings, which will soon receive a fresh helping of homemade compost.]

When Mike asked me to move in with him I was all for it,but I had worries that my environ-mess would end up leading to conflict. Myfirst concern was the clear plastic bag that immediately appeared on thekitchen counter for compost. I was not thrilled about this. Mike graciouslychanged the location of compost, putting it into extra large yogurt containersunder the sink so I would neither have to see nor smell it. I was a little moregung-ho about recycling, but I would get annoyed at the times I did not recyclesome very hard-to-clean, but recyclable, food container, only to find it laterperched on the counter waiting to be rinsed for the recycle bin. There werealso the clothes air-drying all over the house, his regular omission of buyingpaper towels from the grocery store, and that darn fennel-flavored toothpaste.It was not that I was against the environment; I just was not ready for thehassle (or the fennel). Still, Mike said nothing. He quietly engaged in hisgarbage-diving excursions for the recyclables I had thrown out and he wouldturn off the bathroom light I was forever leaving on, but he never complainedand never tried to “convert” me.

Something slowly started occurring over the first year Ilived with Mike and it is hard for me to pinpoint one event/moment/day that itoccurred. First, in my never-ending acne battle, I decided that perhaps usingmore natural products (free of parabens, petroleum, etc.) would be worth a try.This led me to reading all sorts of green beauty literature, which inevitablybled over to using more natural cleaning products as well. I still was notcrazy about compost, but I felt that my body deserved better and Mike and I(and our little cat) deserved to not inhale my ammonia-and-bleach bomb everytime I cleaned (which I must admit is often). I also realized one day that mychronic belly aches had subsided, and the only possible explanation was eatingMike’s delicious meals, which included lots of local produce, grass-fed andorganic meats, and basically nothing that had an ingredient that I could notpronounce.

Before I knew it, I had purged my medicine cabinet of any and allchemical-laden beauty products, bought multiple house plants known to naturallyreduce the level of toxic chemicals in the air, started air-drying a lot of myclothes (love those power bill reductions), recycled without complaint, used non-toxiccleaning products, started growing my favorite greens and herbs, walked to thegrocery store, and even, though this is still one of my biggest eco hang-ups,contributed to the compost. This was not a little transformation. This was not atemporary change in behavior to please my boyfriend. I love gardening. I lovecleaning with things that I know will not hurt me. I love lying in bed at nightthinking about how my corn plant is helping me breathe a little easier. I lovethat my face is clearer than ever. In fact, my next project is going to be totry to make my own beauty concoctions. I am hooked.

The thing that I find most amazing about these changes isMike never said a word. Not even subtle suggestions. He answered my endlessquestions and was obviously thrilled with my curiosity. But he never“should-ed” me. He never made me feel bad for being a less-than-stellar memberof my planet. He inspired me by his quiet example of doing what felt good andright to him, but also ultimately was good and right for me to live a morehealthy and balanced existence as well. He was patient. He was quiet.

Now that I have far more knowledge under my belt, I feeltemped to roll in like superwoman and save those ladies applying questionablelotions to their precious bodies. I want to lecture everyone I see eatingpreservative-laden, manufactured food that they would feel much better if theywent local and fresh. I want to sing the praises of growing your own food tooffice workers who could use a little time outside working with their hands.

I have never reacted well to people telling me what todo. I don’t know anyone who likes to be told what to do. As a psychologist, Iknow that simply telling someone what to do does not work. If it did, I wouldnot have a job.

Therefore, I will spread the word by not spreading theword, but by being the example that Mike was (and is) for me. Don’t get mewrong, if I have an interested audience I will talk. But I won’t force myopinions and I won’t expect people to know what I know and be as moved as Ihave been. We are all in different stages of knowing our place in this universeand everyone’s path is different. Fortunately, I will feel much stronger,healthier, and prouder on my expedition having an incredible eco man to cheerme on along the way. I only hope that I too can do the same in my own – quiet -way.