"Patagonia." It’s a very commonplace word in my life these days, but I get particular satisfaction hearing and speaking of it in the context of our company’s namesake, and with so many great stories drifting our way from that wind-battered microcosm of the alpine climbing world this winter, I can’t help but feel how inspirational a place it truly is.

Many of our ambassadors make the journey south every winter, to El Chalten and Bariloche, then into Fitz Roy, the Torres del Paine and many other hidden gems in the Patagonia region. This season, Colin Haley managed an impressive solo ascent, Kate Rutherford and Mikey Schaefer discovered a new route, and, today, we're stoked to share the news that Nicolas Favresse and Seán Villanueva, along with Salt Lake local Ben Ditto, pulled off a first free ascent of the East Face of the Central Tower of the Torres del Paine via the South African Route. To quote the proclamation of the team, “Free South Africa!” Here's Nico with a recap of the climb:

We (Nicolas Favresse, Seán Villanueva and Ben Ditto) just came back from Torres Del Paine National Park where on the 2nd of February we summitted the central tower via the South African Route. Our ascent is possibly the third ascent of the route and the first free ascent of the east face of the central tower (1200m). We spent 13 days on the wall accompanied by our trusty mandolin, tin whistle and harmonica. 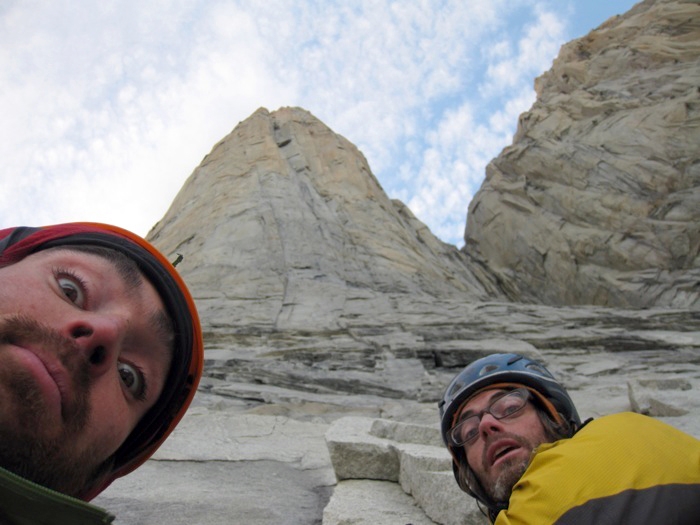 The South African route is a striking line, which follows a huge dihedral that literally cuts trough the middle of the east face. It's such a beautiful and obvious feature that we had to come back to Torres del Paine for it.

We had heard of grades from A3 up to A4 and knifeblade seams so we were really not sure it would go entirely free. So we decided to leave our assumptions on the ground and follow our instincts.

[Seán and Ben tap into their instincts at the base of the South African Route. Photo: Ben Ditto] 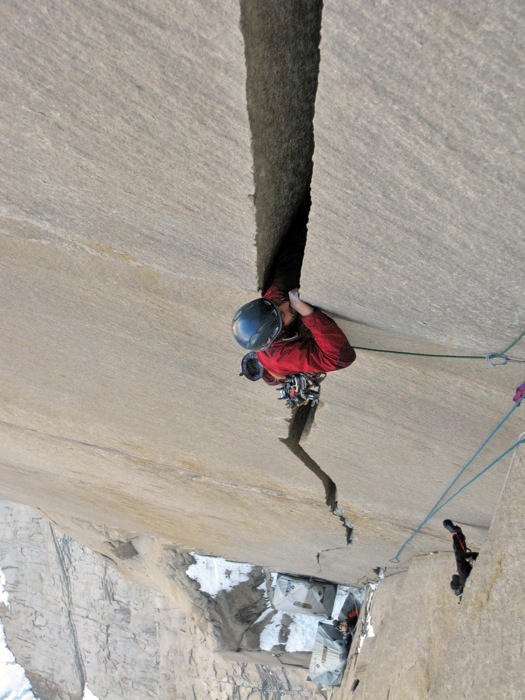 We encountered some amazing free climbing pitches with very sustained climbing mostly in the 5.11 range almost never below 5.10+. We estimate the 2 hardest pitches around 7b+/5-12c. One of them is a very pumpy fingertip enduro corner while the other is a face climbing boulder problem with a spectacular sequence using a crystalline pocket. We added one bolt to protect this free variation (away from the aid line). Another main free crux of the route is a mega sustained steep 5.11+ offwidth which was very run out with the only number 6# Camelot we had. Three of the pitches were redpointed after the summit due to icy conditions.

[Nico gets sucked into the offwidth. Photo: Ben Ditto]

Even though we never had very good weather we were disappointed that it wasn't worse as we were looking forward to do some portaledge surfing and long jamming sessions.  We were only trapped in our portaledges for two days, other days we were able to get at least one pitch in. After one day of fixing ropes we left the ground on 24 Jan with 15 days worth of food. We moved on the wall in capsule style making two portaledge camps: one on top of the shattered pillar (pitch 10) where we stayed 7 days and the second was at Boeing ledge (Pitch 17) where we stayed another 6 days. 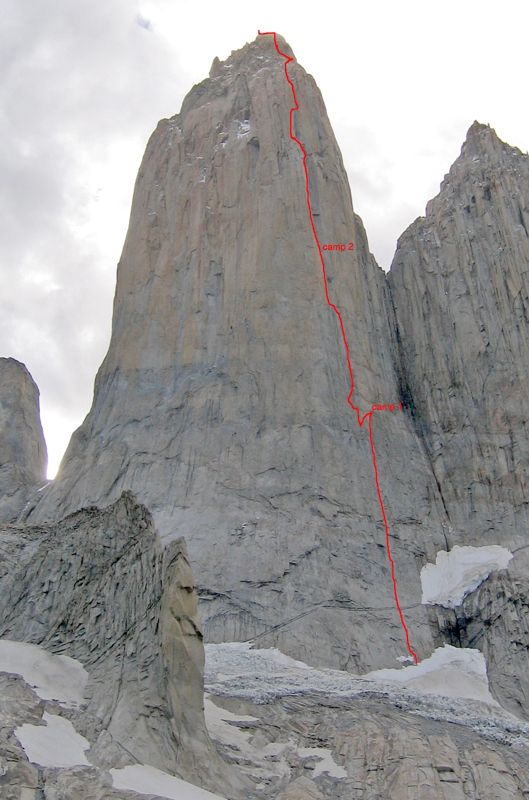 The route was first climbed in 1973/74 by a South African team and it was the first route on the East face of the Central Tower. As far as we know it had only seen one repeat in 2004 by other South African climbers. While climbing the route our respect for the first ascensionists grew. We found it very impressive how clean the line was left with so few bolts and fixed pitons. There are only two bolted anchors.

However we did find a lot of old fixed ropes left behind by previous expeditions on the east face (not just on the South African route) and we brought down as much as we could (a few hundred meters of ropes) . It's a pity climbers trashed the wall like this. Most of the ropes we found were hanging on the lower slabs which shares the start with other routes so we are not sure who left them behind.

I guess if you use a lot of fix ropes that's your own strategy choice and there is nothing wrong with that as long as you do everything in your power to bring them back down from the wall. Here it looked like the climbers didn't even try to remove them. Considering the small number of ascents on the east face of the towers and the amount of trashed ropes still hanging on the wall it seems surprisingly common practice for climbers to leave their ropes behind. And from what we could see, there are still loads of ropes hanging on Golazo and The Linea de Locura. 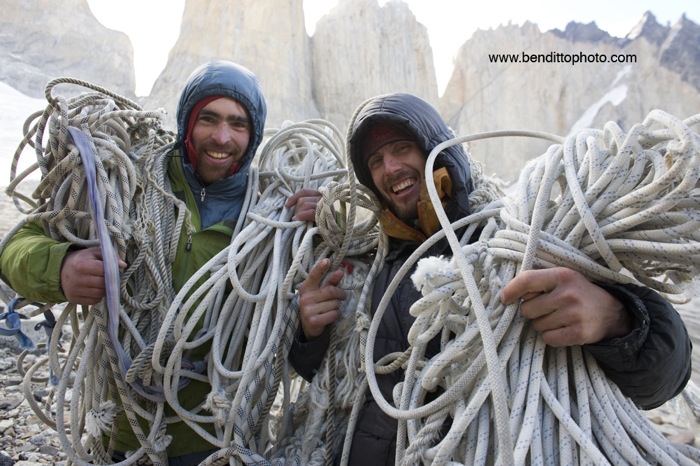 It was really annoying having to climb around these ropes. The ropes get beaten and trashed by the hard weather conditions but they don't disappear! We're more than grateful to be able to enjoy this incredible environment, and find it extremely important to leave as little trace as possible behind. Bringing down those trashed ropes felt like a small extra effort in comparison to the satisfaction it gave us to see the wall cleaner as we were going down.

[Seán and Nico with all of the fixed-rope trash they cleaned off the wall. Photo: Ben Ditto]

It also must be said that the Belgians are a whirlwind of positive energy, bringing music and laughter to climbers’ camps throughout the western hemisphere in a contagious manner. Keep an eye out for the new Tin Shed coming soon for a full update of new content including a video Sean made documenting he and Nico’s climbing travels and musical escapades this last summer, including their new free line on the right side of El Capitan, The Secret Passage.