I am loath to admit it, but Colin Haley was right. He’s been singing the praises of the Pacific Northwest in summertime, proclaiming it better than my beloved ‘Rado. At last, I humbly concede (although they pay for it the rest of the year, with continual grayness and rain). I’m wrapping up a trip to Squamish, and it’s been a touch of paradise. I feel it’s changed me and my cynical, critical, judgmental nature. Here, a few notes: 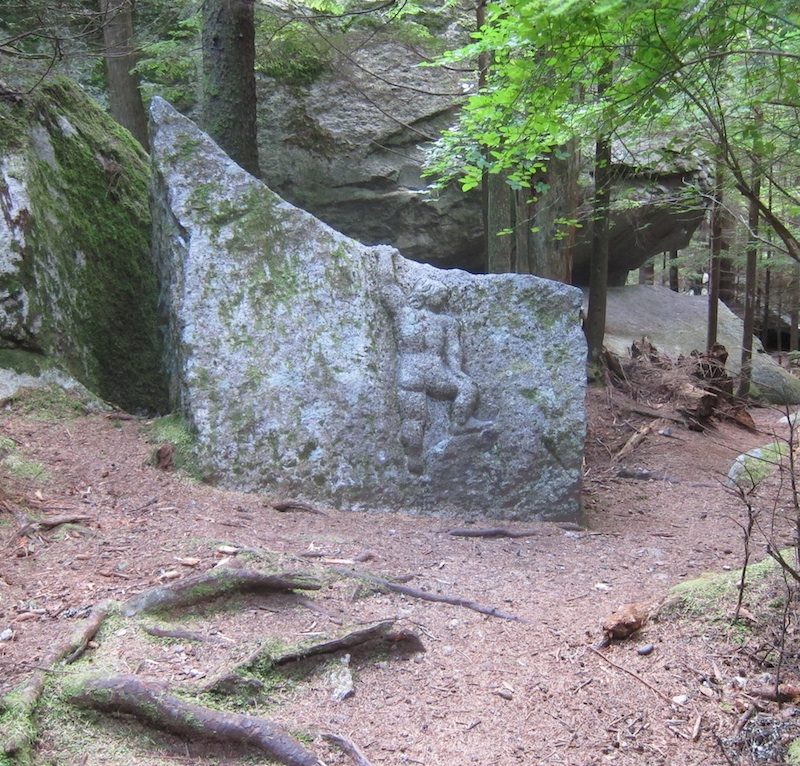 • Day one, my SLF (special lady friend) and I go cragging in the afternoon, and I lead a thin slab in the full sun. It’s still like a million degrees cooler than back home, even in mid-summer. Sonnie Trotter happens to be trail running past, and as he looks up he probably thinks, who’s the idiot climbing that route in the sun? Silly tourist… followed by, wait! I know that mullet! Next thing we know, Sonnie comes up to say hello and chat. Says he wasn’t thinking that at all. T’was a pattern of friendliness that’s repeated itself in myriad forms during our stay. People here are so nice.

• Turns out Sonnie’s wife, Lydia Zamorano, who is even sweeter than he is, co-owns the terrific Squamish Yoga Studio, which I’ve been frequenting for my rickety body. Lydia has this way about her that the other instructors embody as well. They suggest things. Say things openly, kindly. Case in point: I’m in something-or-other pose, badly, and hear Lydia softly say: “And feel free to explore putting your arms out in front if you wish, perhaps you might find that interesting.” I look up and see that I’m the only jackweed with his arms out front. Does Lydia ever feel like blurting out, “No! Hey you, you’re doin’ it wrong!”?

• Climbing: Squamish rules. Big cliffs of impeccable granite, though not as big or as sweeping as Yosemite. Yet I’ve always been more attracted to the overall picture than any single aspect of a climbing area. The climbing is just as good as the Valley, the people are friendlier, the trails are clean, there’s a notable absence of ranger-cops (climber self-regulation seems to work remarkably well here), and no RV traffic jams. The small downtown area seems quaint, and I haven’t seen a single trinket shop. So weird, it’s like…like…it’s like Yosemite without all the bullshit. 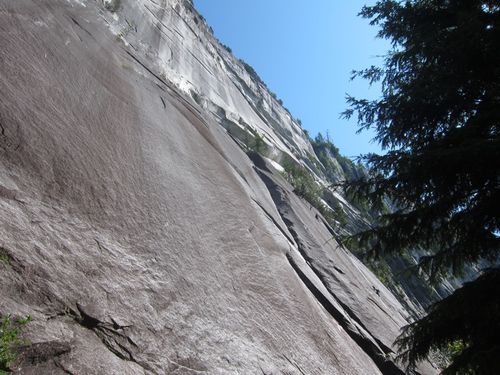 The base of the Grand Wall, on The Chief. Photo: Kelly Cordes

• Granted, no place is perfect. Squamish has hippies (see photo). And while climbing in Squamish you hear road and town noise (and bongo drums from the hippies). But I’ll take these sounds over our National Parks’ anthem: the sounds of televisions (since every RV has one) in the campgrounds, harmonizing with the constant blare of car alarms. 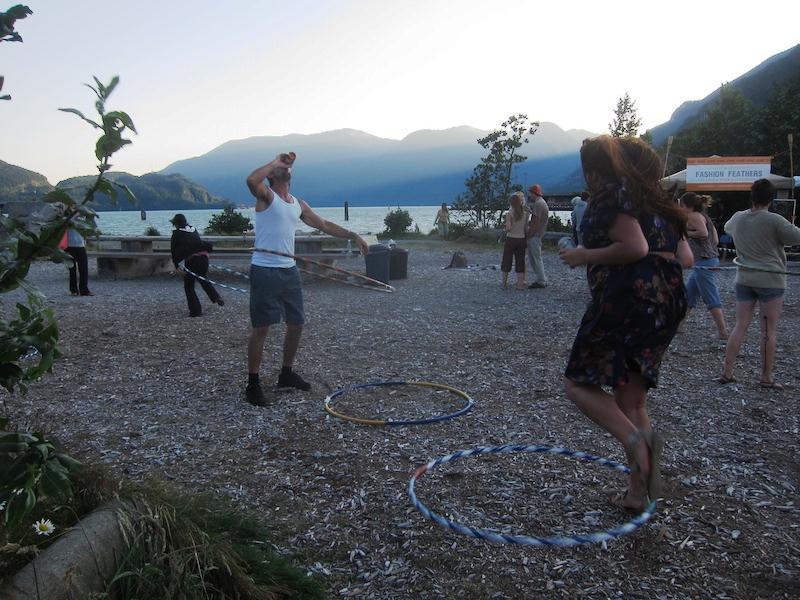 Travel opens us to new ideas. Thus, I’d like to suggest that next time you’re getting an ice cream cone at the mini-golf in Estes Park, or stopping at the friendly neighborhood trinket shop in Yosemite City Village, perhaps you might explore the idea of disabling that obnoxious car alarm.

• I haven’t seen a single American Death Triangle anchor, nor the unsightly rat’s nest of slings so common back home (to which every passing party seems to add another sling – usually all running to some rusty old piton). Here they install bomber equalized, bolted rappel anchors. I heard there’s even a “best practices” code for those who establish new routes, and people seem to follow it. Coming from ‘Merica, all of this leaves me scratching my head. Something for the common good, without a fight? How nice. Ahhh, see, I knew it – even through my computer I heard the election-year screams: “Socialist!!!” 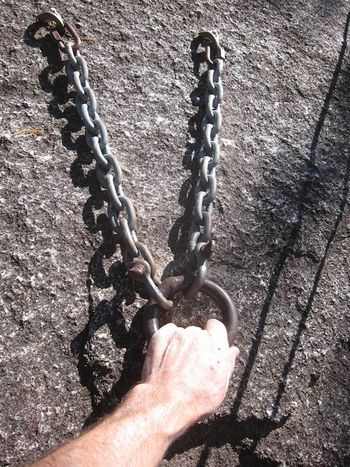 • Alongside my lavish praise of Squamish and Canada lies the truth that we humans aren’t so different. While cragging the other day, a Canadian youth was top-roping as his dad barked nonstop instructions (to the dismay of everyone in earshot). The boy reached the top, thrust his arms skyward and shouted, “Yes!!! I am better than everyone!” The SLF suggested I take him under my wing, and before she had a chance to tell me she was joking, I reflexively blurted: “You’re right, we are better than everyone else! Want to learn how to make margaritas?”

• Speaking of which, tequila is unbelievably expensive in Canada. Damned taxes. I’m thinking of staging a one-man protest outside the liquor store. With this infringement upon my rights, it has been, sadly, a low-marg trip.

• I love the green here. Trees grow out of trees, smaller trees and ferns sprouting from larger trunks, and their branches form enormous canopies that help create soft blankets of earth underfoot, and moss so green it practically glows (but not in a creepy, radiation sort of way). Sun slats through breaks in the canopies, and walking to and from the climbs feels like walking in an enchanted forest. Simply magical.

It’s almost time to go but I leave with a smile and a sense of inner calm, softly whispering a mantra: Colorado and California, you’re doin’ it wrong. 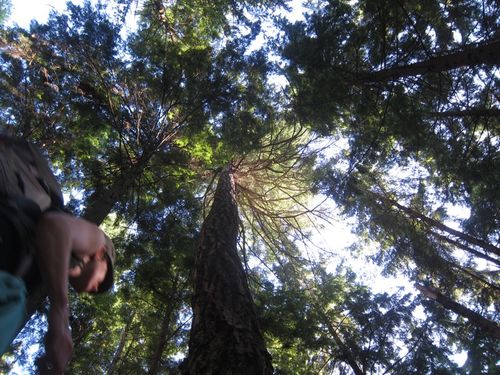 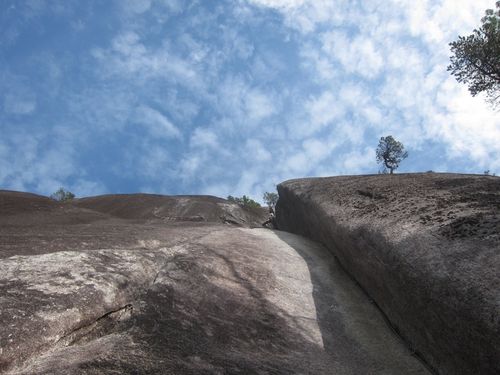 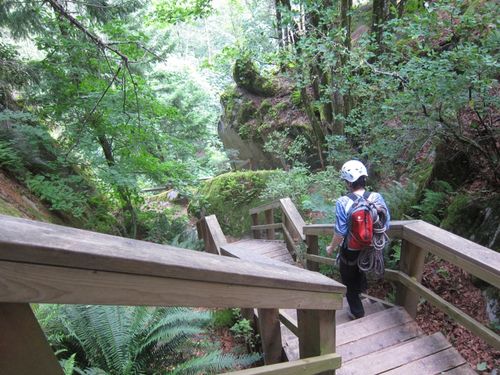