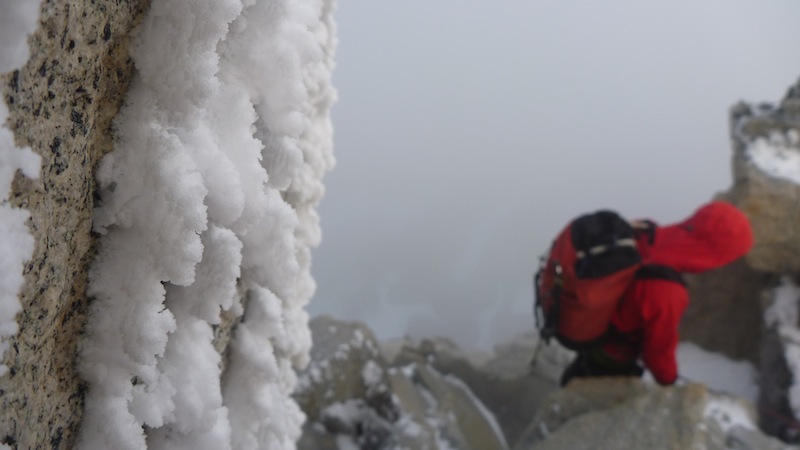 If you are chained to a wall in a dark dungeon famished rats will slowly nibble at your flesh. You can kick, scream and quiver all you want but the rats will sluggishly keep nipping away until they reach your heart and your body goes lifeless. Then they keep going until there is nothing left.

While that might seem like a torture scenario from the Middle Ages, I’ve seen it happen many times. When the bad weather comes, and stays, day after day, and you’re stuck in a tent, a cave or a portaledge, every day you wake up with renewed hope that is quickly crushed by the same old bad weather. Much like the rat slowly eating the corpse, the Patagonian weather has a way of slowly nipping at your motivation. It can transform the most eager and enthusiastic climber into an empty, burnt out, uninspired bum. And when the good weather finally comes, there is nothing left.

Last season in Patagonia, my climbing partner Stéphane Hanssens and I juggled between two of the major climbing destinations. First we went to El Chaltén, Argentina, where we climbed the mythical Cerro Torre via the Ragni route. From there we moved to Torres Del Paine, Chile, where we were joined by our young friend and big wall virgin Merlin Didier. We free climbed two major (as in quality) big wall routes, one on Cerro Catedral and one on Cota 2000. Finally, we went back to El Chaltén and climbed a new route on Fitz Roy. Usually I would only expect to do one of those ascents in a season, so it was magical that we got so much done. The ambiance, experience and strategies we used were very different in both places.

The first time I went to El  Chaltén, the prevailing strategy was to stay at basecamp, and when the bad weather happened, the waiting game began. We took shelter in tents and old huts and the rat would slowly start nibbling. It really sucked the energy out of you. Since then, times and strategies have changed.

Now, basecamps in the Chaltén area are deserted during bad weather. With the weather forecast being so accurate, and with Internet access in the village, climbers stay down in the comfort of El Chaltén and only head up into the mountains when a good weather window is predicted. It makes it a lot easier. The bouldering, sport climbing and plentiful fresh food, helps keep the power and motivation high. 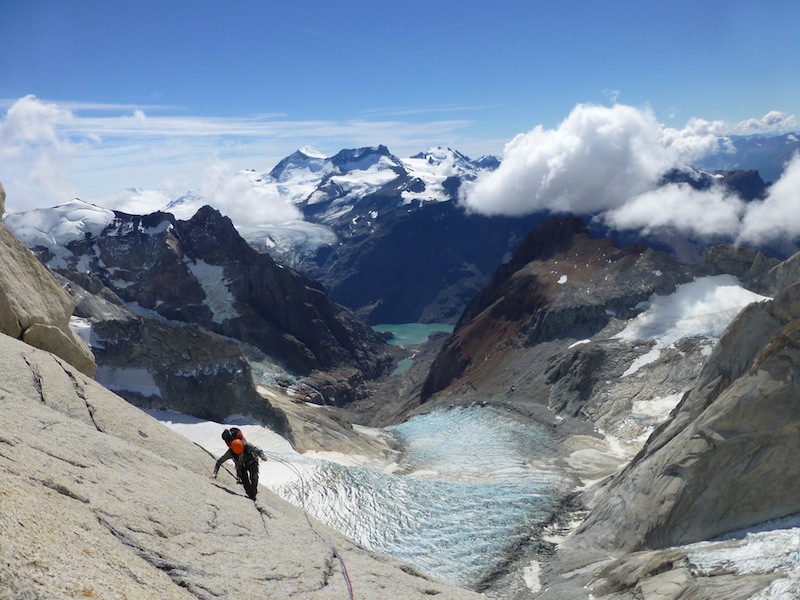 A little poke at Fitz Roy during a well-predicted good weather window in the El Chaltén (Argentina) region. Sean going fast and light during the first ascent of “Persiguiendo el avion” on the northwest face.

Torres Del Paine (Chile) is a different story because the closest village, Puerto Natales, is further away from the mountains and includes a three-hour bus ride. Most still stay in the park and wait out the bad weather. Staying in the mountains, isolated from the rest of the world, has more of an expedition feel to it.

We stayed in Torres Del Paine for one month. Our basecamp was an amazing cave in the spectacular French Valley. We had no radio, no satellite phone or any contact with the outside world. We didn’t see anybody except for one day when we went down to the ranger station to ask for a weather forecast. I’m not claiming that we were in a super remote place – our cave was only 30 minutes away from one of the most popular trekking trails in Patagonia, the famous “W” – but because we had no contact with anybody it definitely had more of an isolated feel to it.

It’s an interesting challenge not to have any weather forecast and try to read the sky. It’s so much tougher.

We wanted to attempt the east face of Cota 2000 in a light and fast alpine style. Every morning we woke up early to contemplate the weather. After four days of not leaving the cave because of snow and vicious winds we woke up one morning to a star-sprinkled sky. So we did the three-hour approach and started climbing. At about 2pm, when we were about halfway up the climb, the weather took a turn for worse. It started snowing and the wind picked up brutally. Suddenly, we were in a very vulnerable position. Cold to the bone, we bailed, fighting the harsh circumstances. 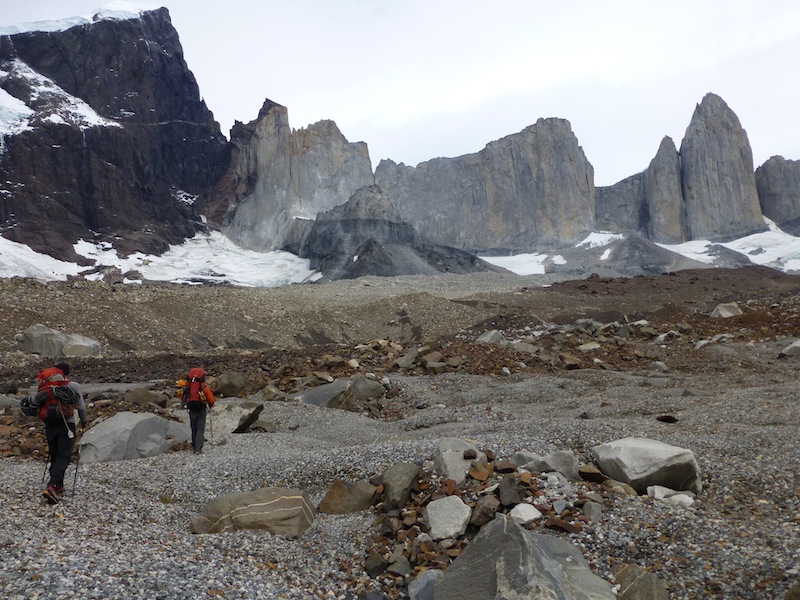 The team walking towards the objectives in Torres Del Paine national park. The big spire to the right is Cerro Catedral and the big El Cap looking wall to the left is Cota 2000. Both walls are 1000m high. 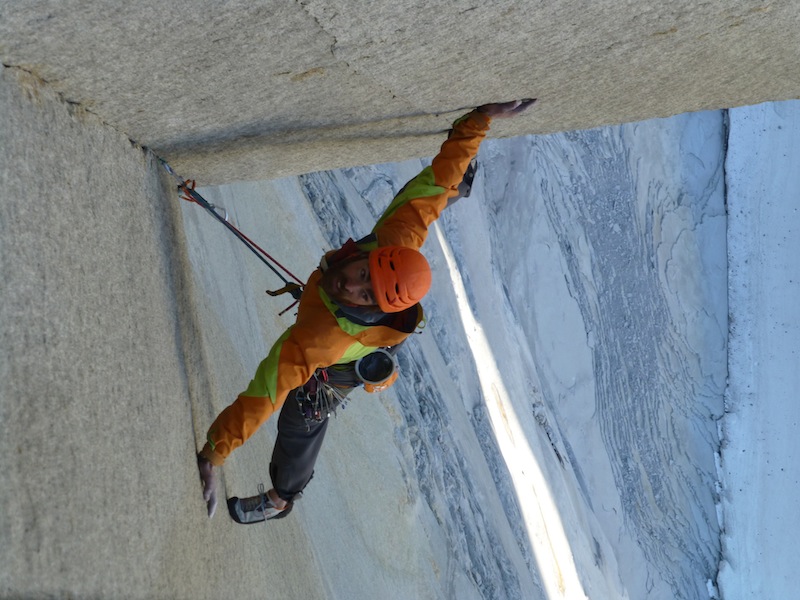 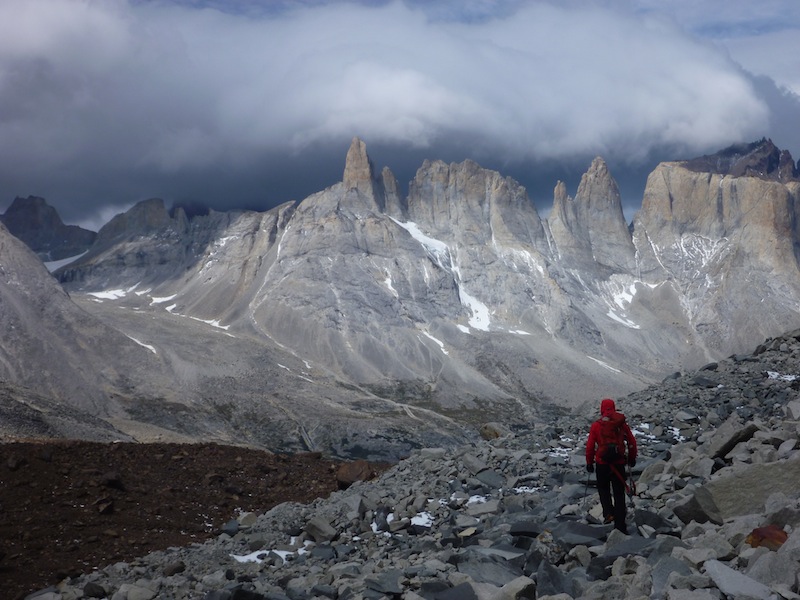 Walking back to base camp in the beautiful French Valley, after being shut down by bad weather on Cota 2000.

Getting shut down by weather halfway through the day takes a lot of vitality out of you. Then, when you try to recover and the weather turns out to be beautiful the next day, some might have the urge to curse. These kinds of incidents happen quite often when you don’t have a forecast.

Everything changes when you have contact with the outside world. People in favor of bringing a satellite phone on remote expeditions will always say, “Well, if you do have an accident, you’ll be happy to have it along.” I can’t argue with that.

That reminds me of a presentation I attended by my good friend and big wall expert from Cataluña, Silvia Vidal, who is no stranger to spending up to 30 days alone on some remote wall, putting up a new aid line with absolutely no contact. When asked by a man in the crowd, why she didn’t bring a satellite phone along with her, she answered, “Well, things can only go wrong if you plan for things to go wrong.” The crowd burst out in laughter. But here’s what I think she meant with that answer. It doesn’t mean that things can’t go “bad,” it just means that if you don’t plan for them, then they aren’t wrong, they just “are.” That might sound arrogant, but I don’t think it’s meant to be.

So both places had a very different experience to them. El Chaltén was hanging out with friends, eating lots of fresh food, bouldering, sport climbing and the occasional quick poke at the mountain when a decent weather forecast presented itself.
Torres Del Paine was being out there in the mountains by ourselves, rationing food, looking at the sky, trying to predict the weather – lots of uncertainties, but it’s certainly more of a spiritual journey. 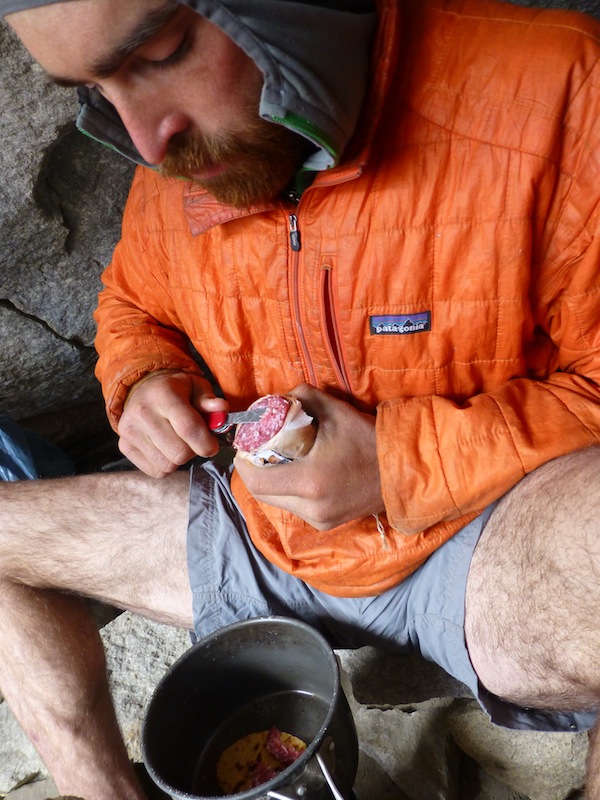 Rationing food can be a major mental battle when sheltering in the base camp cave on a bad weather day. Sean is living it up by making pizzas.

Now I’m not saying that one is better than the other, both have their attraction, and I enjoyed both a lot. Eliminating much of the suffering is nice, but still, there is something genuine about being completely cut off, totally committed, just relying on yourself and your friends, and not knowing what the weather is going to do. That’s when the rat can be the most destructive.

The trick is not to be waiting. If you are waiting you are dying. You have to be in the cave, living. I see these periods as an opportunity to do things that I otherwise would never spend time on: reading, meditating, doing push ups and pull ups, writing, playing music, stretching… alive… being. What a privilege it is to be there!

For more, check out some of our previous posts featuring Sean: Jungle Jamming, Greenland Vertical Sailing and Baffin Island.

Sean Villanueva O’Driscoll believes he didn’t choose to climb—climbing chose him. He considers his first expedition to Patagonia as a turning point in his life because he felt utterly connected with the forces of nature and the adventure of just being alive. Climbing teaches Sean to live life to the fullest and that he can do whatever he wants if he puts his mind to it.