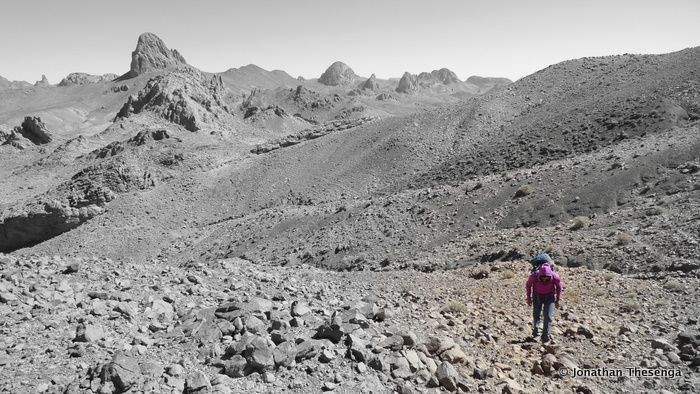 Day Nine here in Algeria and the adventure sweetness keeps rolling along. Today is a rest day and we spent it hiking off into some distant wadis to investigate some attractive-looking summits we saw from afar (which turned out to be choss). We followed old goat trails through the unending black rock, stumbling upon a herd of wild donkeys and spinning our heads at the wild, impossibly vacant landscape upon which we were questing. This is truly a wild place. We are currently camped below Aoukenet, a 700-foot wine-bottle shaped tower we plan on climbing tomorrow. Over the past two days we have been fortunate enough to grab two fantastic first ascents.

[Brittany questing across the wildness of the Atakor. All photos: Jonathan Thesenga and Brittany Griffith]

Editor's note: Even hotter off the sat-modem is Part Four of Operation Algeria from Jonathan Thesenga. For those who are curious about Brittany's take on the trip, here's an excerpt from her email: "Wahoooooo! What an awesome trip we are having. Super, super psyched on the trip so far!" Nice. Enjoy Part Four.

From our campsite below the Tizouyags we scoped out a plum line of cracks that for some odd reason had not been climbed on the 500-foot west face of Clocher des Tizouyag (Aziz told us that the Tuareg name for the tower translated to "The Wives of Crows"). Clocher de Tizouyag is a classic-looking aiguille riddled with clean cracks and a singular, tiny summit. 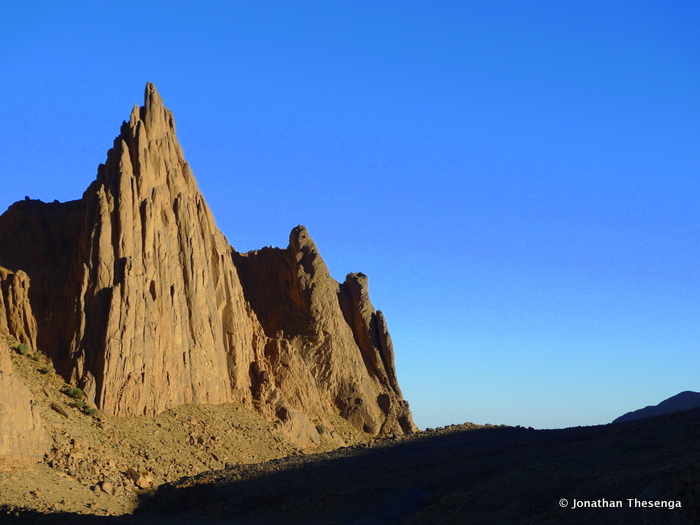 Our line, which we ended up calling Astro-Tuareg, is a six-pitcher that shares the first and last pitches with established routes (which happened to have the worst rock… go figure). The prime cut of Astro-Tuareg was the third-pitch 5.11+ crux (which Brittany led), entailing improbable stemming in a tight slot with just enough gear to keep things reasonable. From the tiny summit we hooted back and forth with Zaoui, Mustapha and Aziz, who were back at camp drinking tea (what else!), and soaked up the stunning views of the Atakor from high above once more. 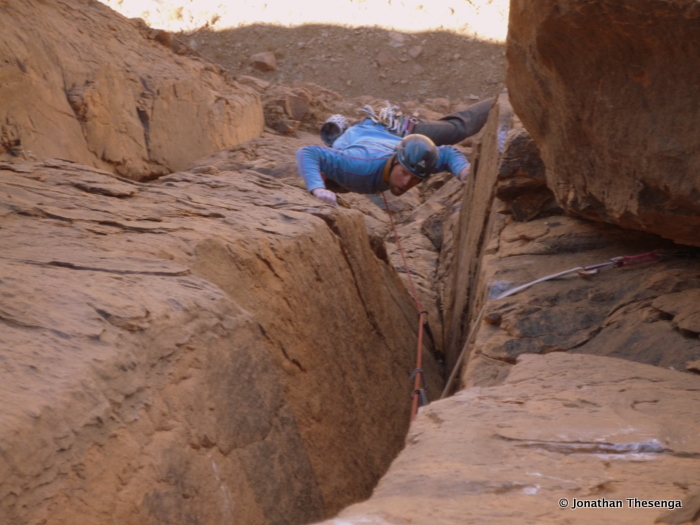 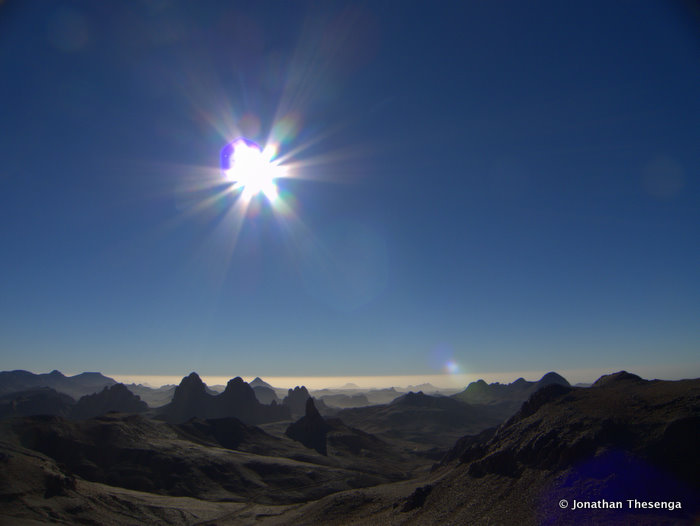 [The expanse of the Hoggar Mountains as viewed from Assekrem.]

The next morning we packed up our gear and headed for Aoukenet… or so we thought. Mustapha had never been to Aoukenet but was confident after reviewing our maps that he knew how to find it. Well, after two hours of bouncing and punishing the Land Cruisers down a wadi he realized maybe, uh, he didn’t have the right one. No problem, though, because off in the distance we could see an absolutely jaw-dropper of a tower that looked like a little slice of Wyoming’s Devil’s Tower—laser-cut basalt splitters for 350 feet. We decided to make camp right then and there, and packed up our climbing gear and began the trek to check out the potential. 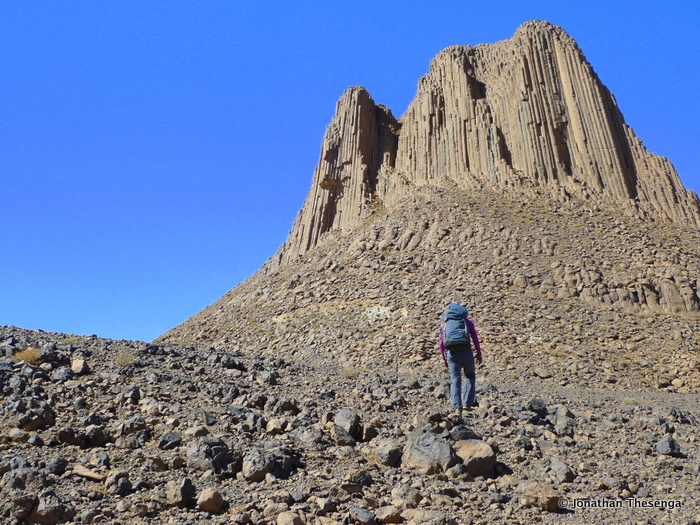 [Brittany hiking up to the base of the unknown tower, soon to be dubbed Aouke-not.] 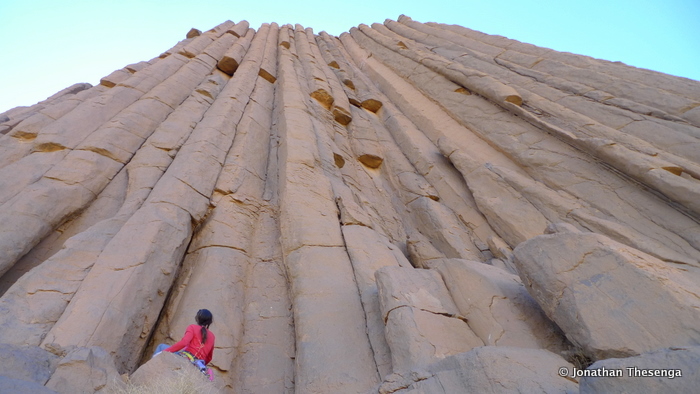 [Brittany at the base, scoping lines. Which sweet one to choose? Decisions, decisions.]

At the base we realized we had definitely scored—the rock was near-perfect, the cracks were thin but climbable and the setting was surreal. Four pitches of perfect jamming later we were on top. Two pitches of 5.11, one pitch of 5.10 and a techy and testy 90-foot 5.12a tips crack, which Brittany managed to gun out. So awesome! Due to the Devil’s Tower-esque climbing, we named our route Close Encounters of the Tuareg Kind. 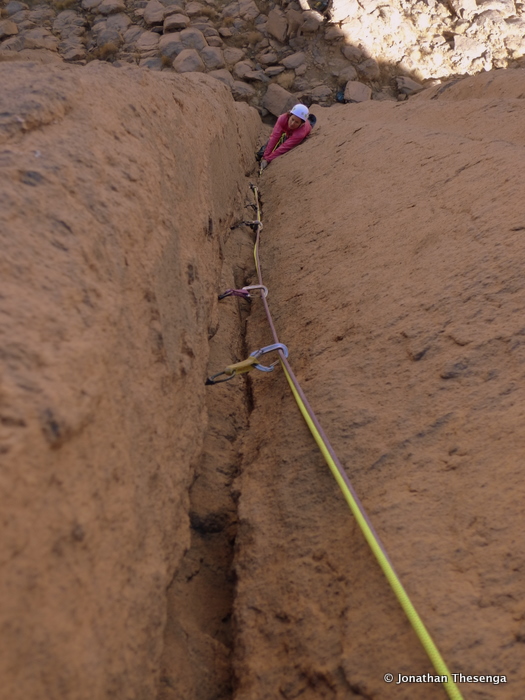 [Brittany following the second pitch of Close Encounters of the Tuareg Kind.] 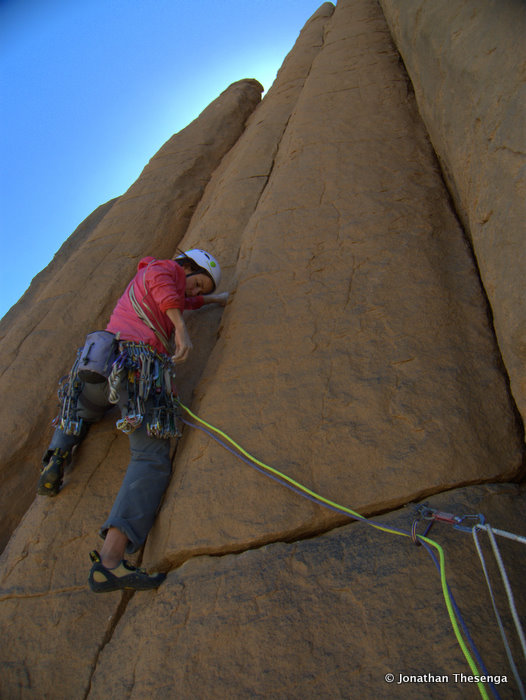 [Brittany leading the crux pitch of Close Encounters of the Tuareg Kind.]

The summit was covered in smooth-topped basalt mushrooms and we eagerly took off our shoes and relaxed in the mild temps and comfortable breeze. No cairns or signs of anyone having ever climbed the tower. All around us were domes and spires poking out of the desolate, rolling, rocking terrain. A mile or so away to the west in a different wadi we could see Aoukenet. Ha! Such a great bit of luck that we went down the wrong wadi and discovered this unclimbed gem. Back at camp Aziz told us the nomads surely had a name for the tower, but that since were the first climbers to summit it we should give it a name, so we appropriately dubbed it Aouke-not. 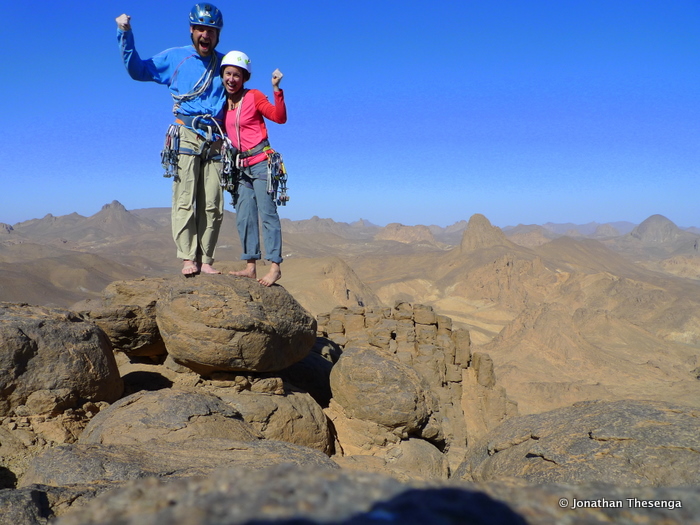 [Brittany and Jonathan on the summit of Aouke-not.] 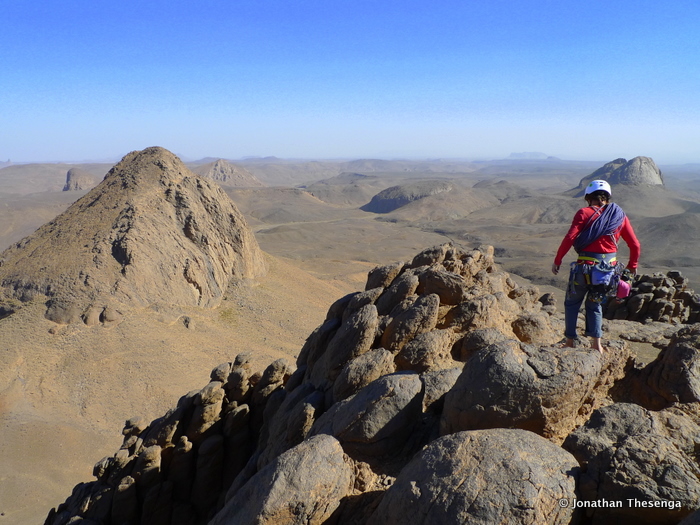 [Brittany searching for the descent on Aouke-not.]

Now we are about to settle in for what we do every night with Mustapha, Aziz and Zaoui: put on all of our clothes, sit by the micro fire and share stories and laughter, as those three drink countless cups of tea, which Aziz dedicatedly prepares non-stop like a short-order cook (they have already used up nine kilos of tea in nine days!). It’s truly been great having these three guys with us as they have added a unique and special cultural ingredient to our trip. 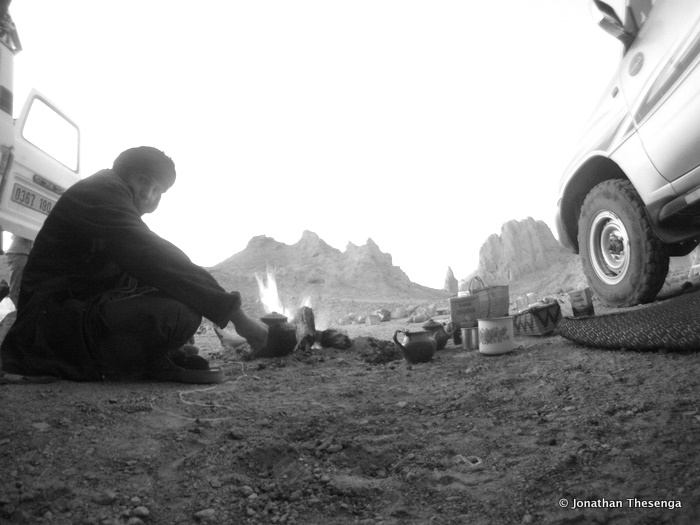 We’ve got a couple of possible new routes scoped out on Aoukenet’s southeast face, so we’ll see how it goes! Definitely looking forward to another spectacular view from the summit!

This post comes right on the heels of Part Three due to some sat-modem issues and the holiday yesterday. Catch up on the entire series here: Operation Algeria.