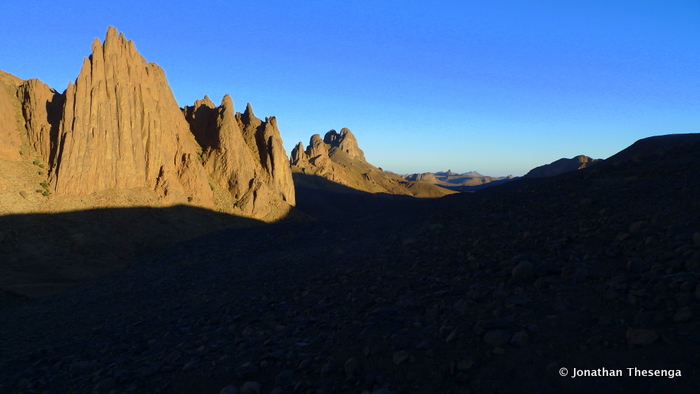 It’s the end of Day Six of our trip to Algeria and we are freezing. Seriously. All of our clothes on—including long underwear and down jackets! How is that possible? Aren’t we in the Sahara? Well, delete those pictures of sand dunes and palm-tree-fringed oasis from your mind—we are bivied up in the Atakor region of the Hoggar Mountain at 2800 meters and tonight is clear and cold, and yesterday was windy as hell. This zone is so gnarly—just an endless sun-cooked sea of rock-covered plains, except for the sweet basalt towers we are camped below.

But let’s go back a couple days—the first ascent on Adaouda… it went south. Brittany sent the techy 12a first pitch and I scratched out the 5.11 second pitch, but then the rock got worse and worse and worse. Brittany ended up having to A0 around a giant detached flake of doom and then sketch past this guano-filled corner and massive, prehistoric-looking bird nest. The next pitch was just as bad and I battled to get gear in behind mud-stacked blocks in a chimney/slot. Once I engaged a hollow flake the size of a door that threatened to slam into Brittany at her sun-baked belay, we knew it was time to bail. Less than a rope-length from the summit of Adaouda we rapped off, leaving our first ascent incomplete and thankful to get outta there with nothing more than frazzled nerves. 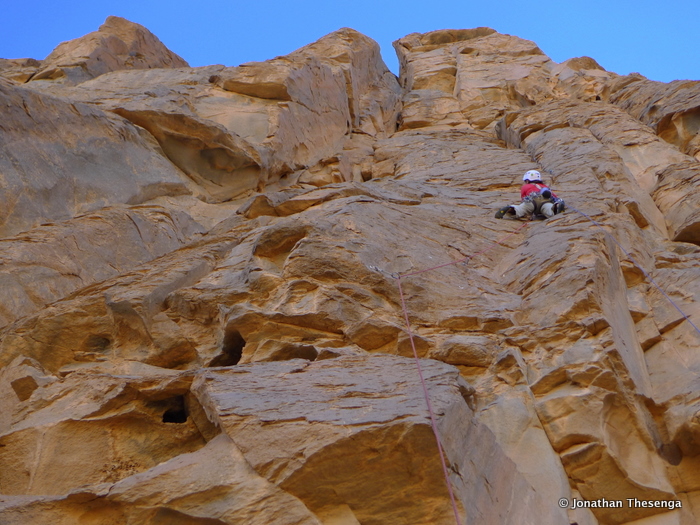 [Brittany leading the 5.12a first pitch of our incomplete first ascent on Adaouda.] 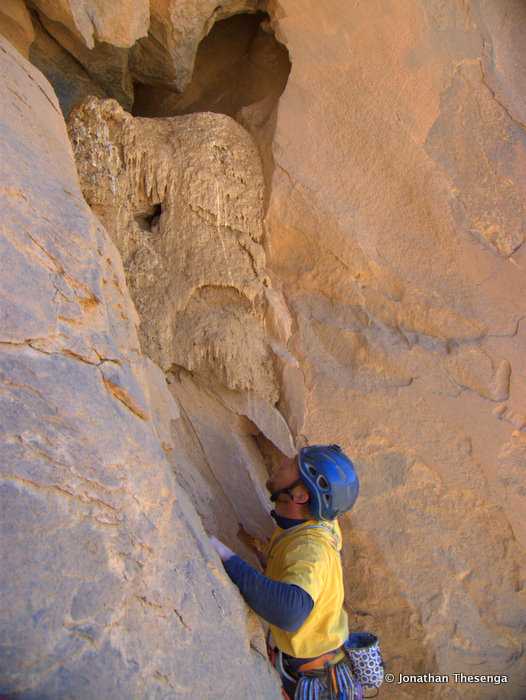 [Jonathan questing past the guano-filled bird’s nest on crap rock.] 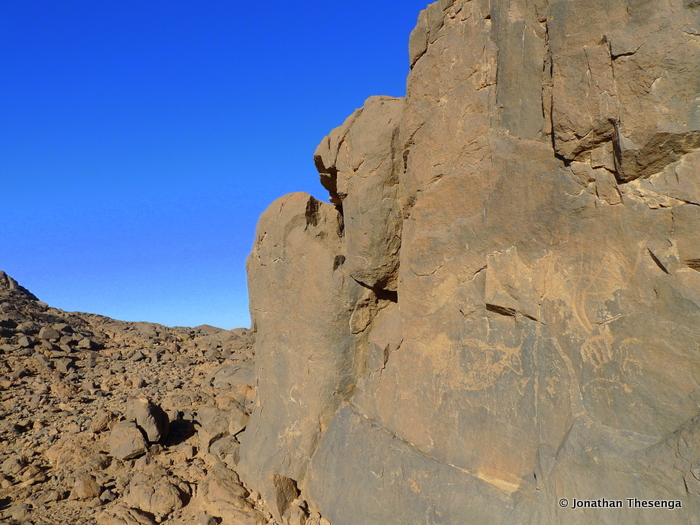 [Pictographs from long ago near our Adaouda wadi camp.]

The next day we piled into Mustapha’s Land Cruiser (with Zaoui and Aziz close behind in their rig, as well) and headed toward the Atakor—home to the Tizouyags, southern Algeria’s most famous summits and reputedly the best rock in the Hoggar. The three-hour drive was a showcase of the areas burly terrain. Blistering hot and rocky for as far as the eye could see, Akar Akar Plateau’s bleakness was actually a thing of beauty and kept us captivated throughout the drive. 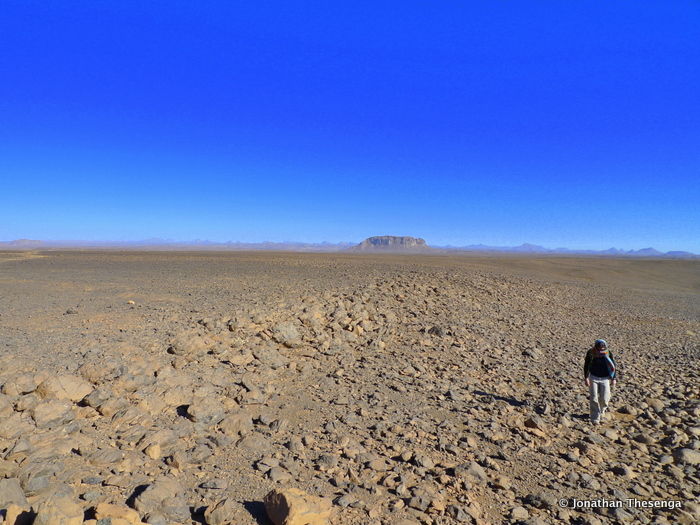 [Brittany venturing amongst the nothingness of the Akar Akar Plateau.] 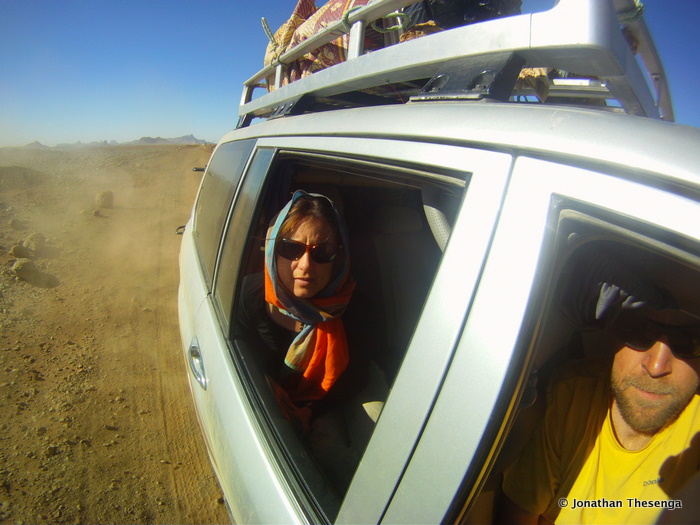 [Brittany and Jonathan on the hot, dusty and desolate road to the Atakor.] 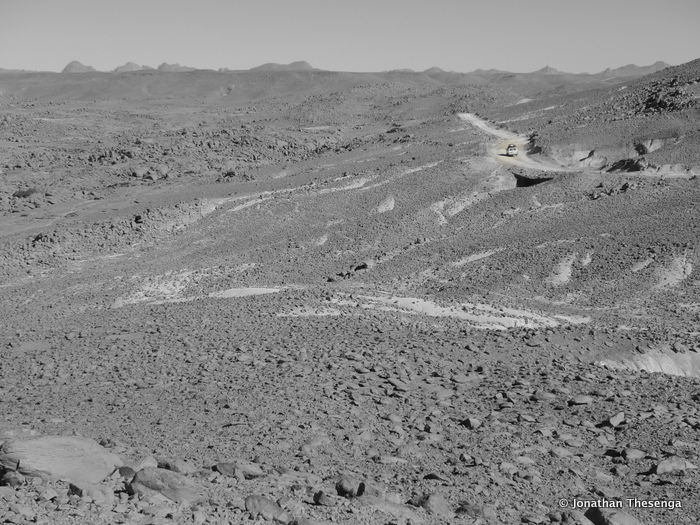 [Zaoui and Aziz bouncing along on the road to the Atakor.]

Midway through the drive, we were amazed when Mustapha pulled over and directed us down into a hidden guelta where we found blissful pools of cold, clean water to soak our weary bones in. So sweet! 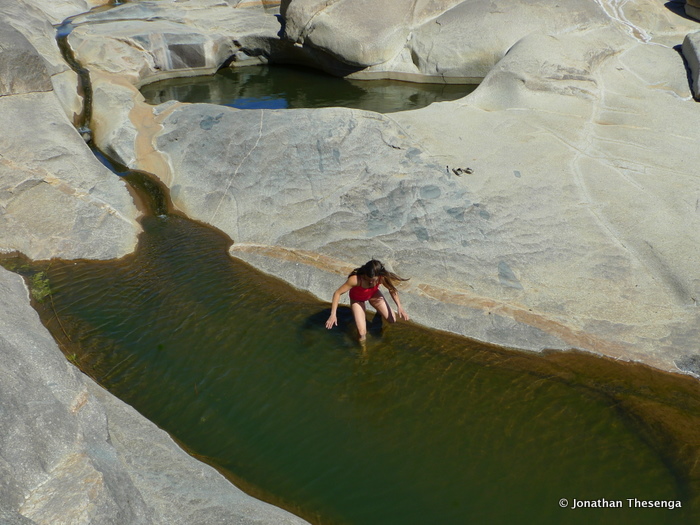 [Brittany going in to rinse off the dirt at the Afilal Guelta.]

After that (and a quick lunch prepared by Zaoui in a random shipping container where the caretaker of the guelta lived!) we finished the bouncing and battering drive to the Tizouyags. 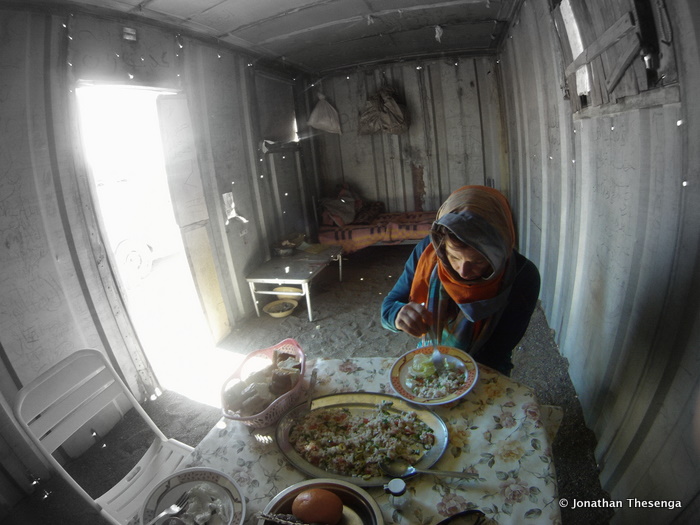 [Brittany enjoying lunch inside a shipping container near the Afilal Guelta.]

Today the winds died down to less-than gale force levels and we ventured up a classic 5.11 route on the iconic Tizouyag Sud that was established by Arnaud Petit, who is a climbing hero to both Brittany and me. We’ve repeated his routes in Mali and Morocco, and this 11-pitch, 900-footer was another testament to his eye for the perfect line. On the windy summit, Brittany immediately called it one of the Top 5 multi-pitch routes she had ever done. The summit views were incredible, offering a 360-degree view of the stark, otherworldly landscape. Amazing! 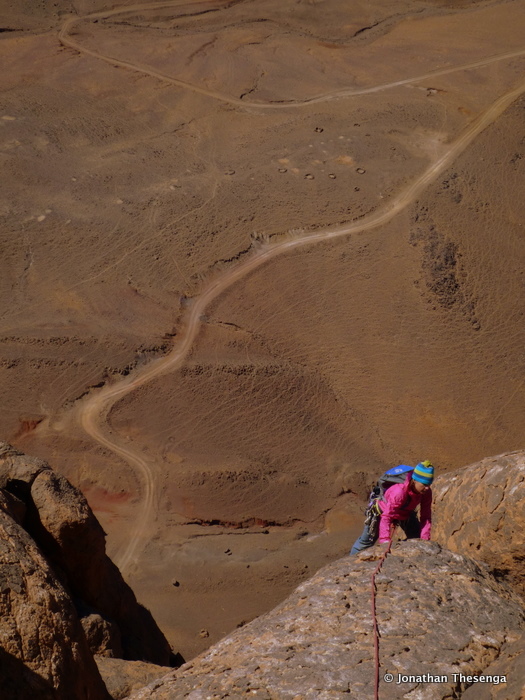 Mustafa, Zaoui and Aziz just chill all day at camp, alternating between hooting up at us, dozing in the sheltered sun and drinking tea (Aziz is the designated tea maker, even waking up in the middle of the night to brew up for Zaoui’s insatiable need for tea). These three guys have been awesome and are perfect companions for us—although they are troubled by how little we eat and that we don’t drink Coca-Cola! As the only unmarried one in the crew, Zaoui has confessed that this is the year, that he has to get married, and of course Brittany immediately committed us to return for his wedding, whenever that might be. 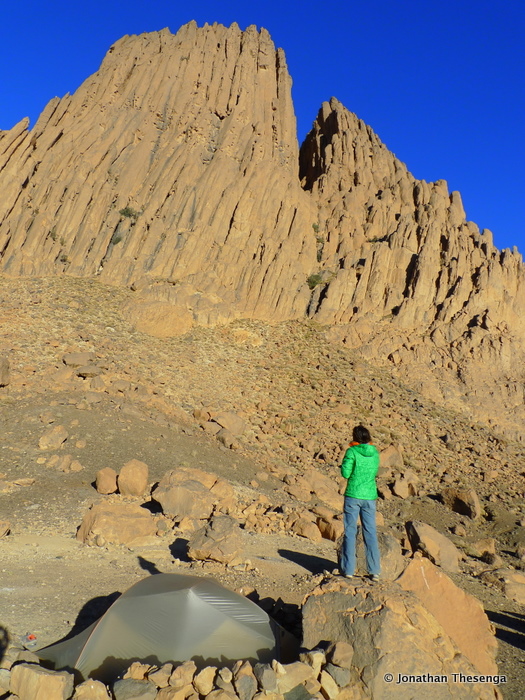 We will stay here for a couple more days, again in pursuit of a first ascent, as well as the other two main summits of the Tizouyag area. Although our camp is shockingly cold in the morning and at night (and freakishly hot in the midday sun), we have grown to love this spot in the Atakor and look forward to more days of adventure on the rock and entertaining moments with our friends Mustapha, Zaoui and Aziz.

If you're new to the series, catch up on all the posts from Operation Algeria. Part four is coming very soon.