Great news from Patagonia Europe climbing ambassadors Nicolas Favresse and Sean Villanueva, the pair established a new free route up El Capitan in Yosemite Valley. In their ground-up effort, the team blended elements of current routes Eagles Way and Bad to the Bone on their way to the base of a hitherto-featureless wall. It was only after direct encounter with the face that The Secret Passage was revealed. Read the note Nico sent us upon completion of the climb:

Sean Villanueva and I just freed a new route on El Capitan! We just came down Friday, October 10th, after 5 days on the wall. It’s for sure one of my best accomplishments and strongest climbing experiences. All my years of climbing seem to have blended together to brew this new major piece of climbing. The route tested my physical and mental abilities to their limit with the challenge of many hard pitches to send each day on the wall plus the fatigue of hauling. In order to leave the aid routes their original way, we were pushed to climb sometimes on very poor gear and at other times spaced apart. But beside the physical and mental challenge, the experience exploring the wall for a way to free it felt to me the most powerful.

Bottom: The Secret Passage as seen from the Valley. Click on pic to expand the image.

So many sections looked at first impossible but with optimism, faith and creativity all of them gave away a solution with an amazing amount of holds, which–if one of them did not exist–the route wouldn’t go free. It felt like each solution was a sign of communication with the rock.

The idea of trying to free this line came up in December 2006 when I aid-climbed Zodiac. I just couldn’t keep my eyes from looking right at the line just like if I felt something instinctual. The line stayed in my mind and this year as I arrived in Yosemite with Sean Villanueva in mid September, it was something I really wanted to check out. With him, I knew we could try our best to climb it in a fun style: no fixing, no jugging, no rappelling, just finding the way up from the ground and bringing the mandolin and flutes for some El Cap freestyle jamming.

On our first exploration up the line we went big-wall style and the goal was just to see if it would go free. As my instinct felt always strong with the line, my rational mind on the other hand had a harder time with rumors of impossible blank sections, that part of the wall having been unsuccessfully checked for free climbing on rappel by notorious El Cap free climbers. The first time up the line, we spent 4 days mostly following the aid route Eagles Way. When a section of the aid line would not be possible to free we would look at every option of the free climbing labyrinth and that required sometimes doing long pendulums.

Up to two pitches from the summit everything seemed possible to free with a few very hard pitches. But there, so close to the summit all the hopes of freeing the entire line dropped with four meters of blank rock. We topped out the wall then moved our rope to the side to make sure we didn’t miss a free alternate. But no, the four meters of blank rock seemed to be the easiest way up the wall.

When we came down at first I wasn’t sure if I wanted to go back on the line. Why expend all this effort for something that wouldn’t go entirely free? Then after a day of rest, I woke up with a strong feeling of needing to go back on the line. I thought if I can’t free the whole line it could still be so fun to be up there hanging out on El Cap, free climbing pitches at my limits and playing our musical instruments.

Before setting off for another multiple-day push on the line, Sean and I decided to work on the lower hard cruxes of the route on two day-trips. We never fixed any line. Then we went again last week with the potential to stay five days on the wall so that it would give us enough of a margin to explore and try to redpoint the upper part of the wall. 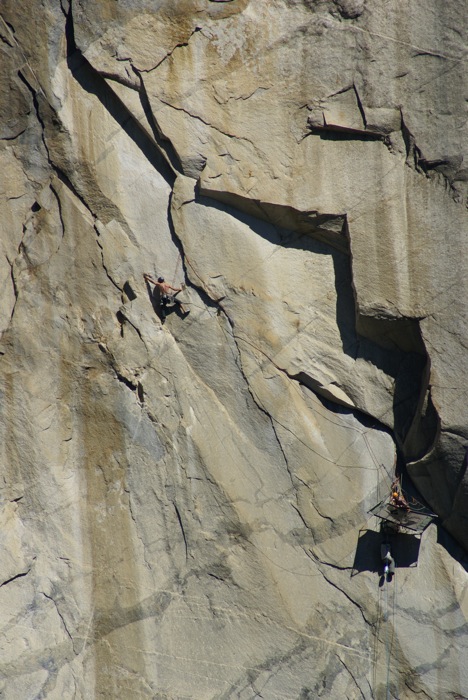 After five days on the route, we reached the four-meter blank section. Up to there, I had been able to redpoint every single pitch of the climb with many of them on the edge of my limits. And as I got ready to aid the rivet ladder I looked down and to the side and saw a tiny bit of dirt sticking out of the super blank polished granite. I lowered down and discovered a very thin laser-cut looking seam, impossible to see unless you are at level with it. I cleaned the moss and “the secret passage” appeared making one of the raddest pitches of the climb. We called our new free route “The Secret Passage” after this unique pitch which allowed the climb to go 100% free.

The route follows a mix of two already established aid lines (Eagles Way for its first ten pitches and Bad to the Bone for the eight upper pitches of the climb) and a bit of new terrain as well. The route is extremely steep and so the climb is very sustained with a total of 15 pitches (rated, respectively: 5.10+ R, 5.11, 5.9, 5.10+, 5.12a R, 5.13c R, 5.13a, 5.12+, 5.12c, 5.13c, 5.12c R, 5.13a, 5.13a, 5.11R, 5.10+). We added a bolt on an unprotectable face-climb variation to the established aid line and place a bolt next to a rivet to make an anchor safe. We were able to free climb the rest without adding any holes in the rock. The nature of the climb is quite run-out and dangerous at sections. One pitch protects with hooks and fixed copperheads, a few others have hard cruxes way past the last piece of pro and there are a few scary sections with lose rock features we couldn’t avoid.

Ed Note: My apologies, I pushed Play before including this tasty little snippet from Frère Favresse. Enjoy some big wall jamming:

For a taste of Nico’s North American climbing rampage, check out his blog, Big Wall Fiesta, or his website Nicolasfavresse.com. Sean Villanueva’s profile can be found at www.fiveten.com.