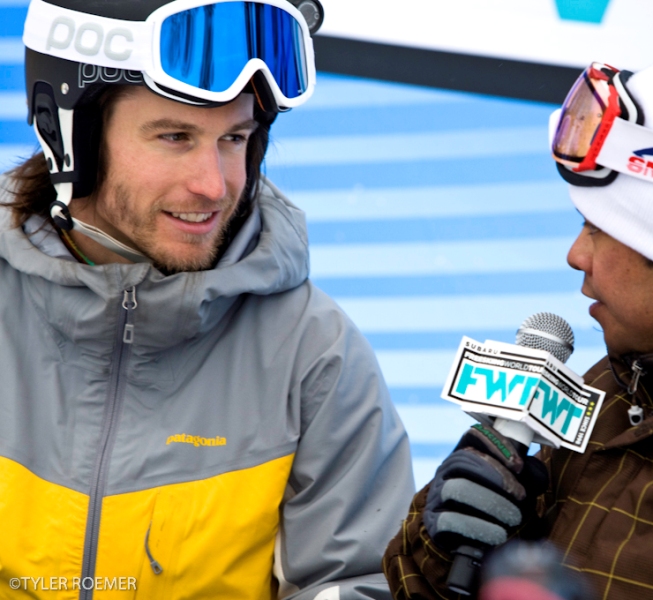 We're indeed reveling in the stoke produced by this week's news from Canada: Patagonia Skiing Ambassador Arne Backstrom did his home resort proud with a strong one-two win at the Freeskiing World Tour, in Revelstoke, British Columbia on Sunday, January 10, taking both the men's overall title for event, and the Backcountry.com Sickbird Award. News and videos have trickled in, and we're happy to share some of the words and footage, courtesy of folks at www.freeskiingworldtour.com, www.biglines.com, and www.unofficialsquaw.com:

Revelstoke, British Colombia—January 12, 2010. Following the qualifier round on Thursday, World Tour round 1 on Friday, and a weather day on Saturday, athletes on stop #2 of the Subaru Freeskiing World Tour were amped to show their prowess on Revelstoke Mountain Resort’s famed Mac Face. The finals venue for the Canadian Freeskiing Championships was a 1,200-vertical-foot alpine face comprised of huge Alaska-style ramps, technical European-style routes, and massive cliff drops slapped to a 35- to 50-degree slope.

Morning clouds and fog kept visibility low, and pushed the competition back more than an hour, as race managers waited for the opportunity to strike. Eventually, the talented Selkirk Tangiers Heli Skiing pilot found enough windows to fly each of the 27 finalists to the start of the venue, which many described as a “gnarly knife-edge ridge.”

[Arne Backstrom shares a few comments with an interviewer shortly after the run that clinched his win of the 2010 Subaru Freeskiing World Tour at Revelstoke. Photo: Tyler Roemer]


Two videos available online highlight Arne's winning run. The first, offered by the folks at www.biglines.com, follows Arne's drop from the top of Revelstoke's Mac Face, all the way to the finish line. The second follows the same line, but is a POV video shot with Arne's helmet cam.

More from the FWT folks:

For the women, Jackson Hole’s Jess McMillan, came in first place with Jacqui Edgerly securing second, and Angel Collinson third. McMillan was thrilled by the competition and course.  “I can’t tell you how happy I am,” said McMillan following her winning run. “You can’t even see the start from the ridge, which is a little unnerving, but the snow was sick,” she added. “I’ve been a competitor for a long time, and a smart one, but the younger girls are starting to huck a lot of cliffs, and I need to as well—so I made some riskier choices today to really challenge myself.”

The clouds lifted a bit by the time Arne Backstrom shot down Mac Face, for the run that scored him first place in the Subaru FWT. Backstom flew at mach speeds over at least four features on the line he had chosen after scoping the venue earlier. “I was looking for that first feature to get me on the right line… once I was in that thing it was happening, and it was all there. Then there’s no other way to go but down.”

Backstrom also won the Backcountry.com Sickbird Award for his fast, technical skiing, but judges had a tough time making the decision as there were so many impressive lines thrown down that earned Sickbird nominations.

As elucidated by the fine folks at UnofficialSquaw.com, "The Sick Bird is awarded to one competitor at each event that not necessarily has the winning run, but wows the judges with overall impression.  So Arne had the winning run and the 'SICKEST' overall skiing of the event." Indeed. Congratulations, Arne!

Freeride World Tour skiers will compete next in Crested Butte before heading to the spicy "Cirque-wood" steeps of California's Kirkwood Ski Resort. The 2010 World Championships will wrap up at Snowbird, on its infamous North Baldy.