In March I went up to the Canadian Rockies, one of my favorite mountain ranges, and spent a few weeks doing some winter climbing. What was most exciting about this season was that there was so much climbing activity. Lots of locals doing lots of cool new routes and new variations. But what was missing from the season was a big ascent of one of the big alpine prizes.

Vince Anderson and I managed to pull off one such prize by making the first ascent of the North Face of Mount Alberta in full winter conditions. (We were outside of calendar winter by less than 10 days.) And we did it by a new route, following features that made sense from the perspective of a winter climb, such as daggers of ice and crack systems that are too small to climb as finger-cracks in summer, but work perfectly as dry-tooling cracks. The route went entirely free and had lots of difficult climbing in the M7 range and one run-out and difficult pitch in the M8 range.

Here are some photos of that adventure. As it warms up, remember the cold and icy parts of the world! 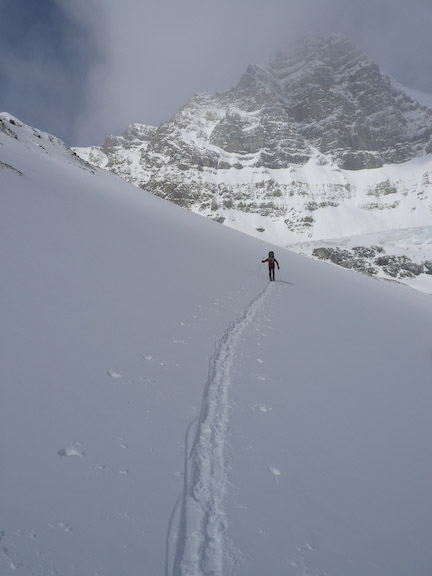 Vince skiing in to Mt. Alberta from the Banff-Jasper Highway. On the first day we had to cache our packs in a snow hole, return to the highway, and sleep at my truck due to difficult trail-breaking. The second day we made it from the highway to the hut in six hours. Photo: Steve House 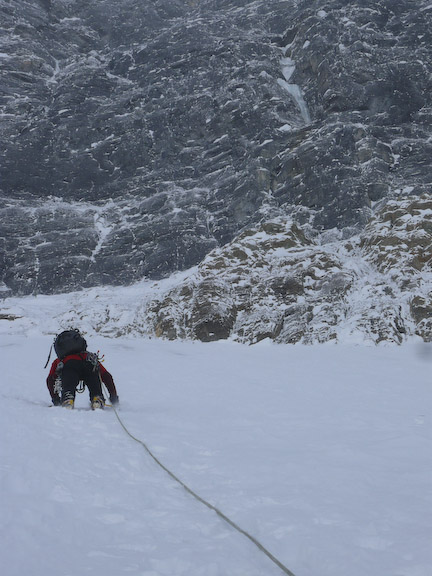 Vince approaching the upper headwall of Mt. Alberta. To get to this point we had belayed three pitches of new climbing through the initial rock band. Where it was easier up here, we unroped and soloed to the next difficult climbing: the notoriously rotten Yellow Band. 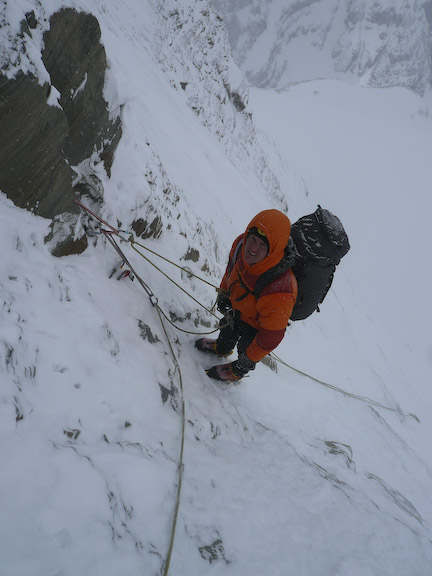 Vince at the first belay in the Yellow Band. 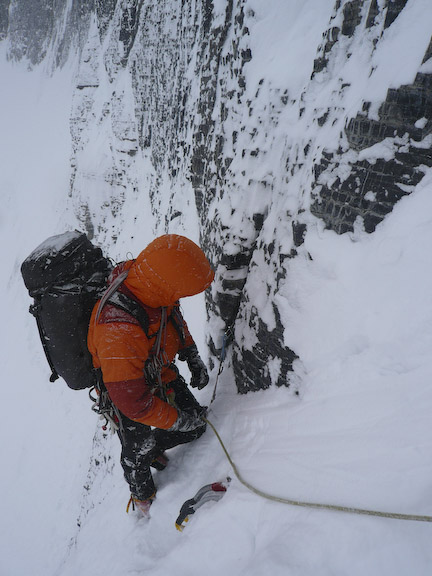 Vince at the base of the upper headwall, the end of the sixth belayed pitch. This is where the real climbing begins and the wall gets very steep. The rock is very solid and compact. 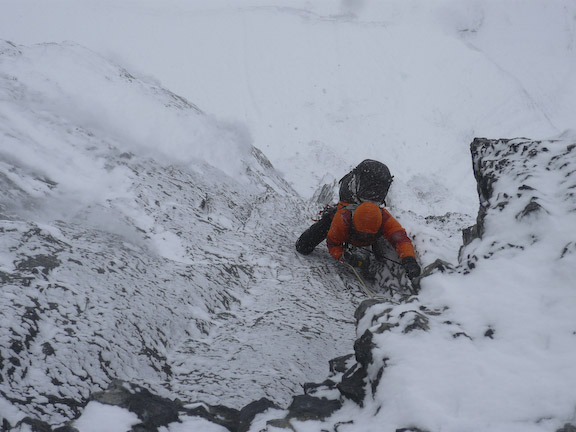 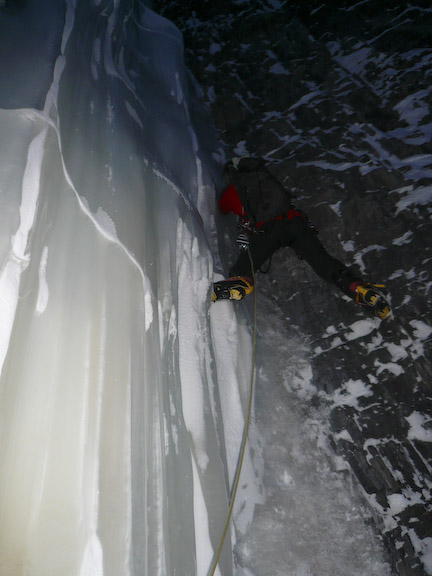 Vince leading the icicle after dark on the first day. This pitch was the third pitch of the headwall and followed the crux pitch of the route. Unfortunately, I have no pictures of the crux pitch as I was leading and couldn’t let go to take out the camera! 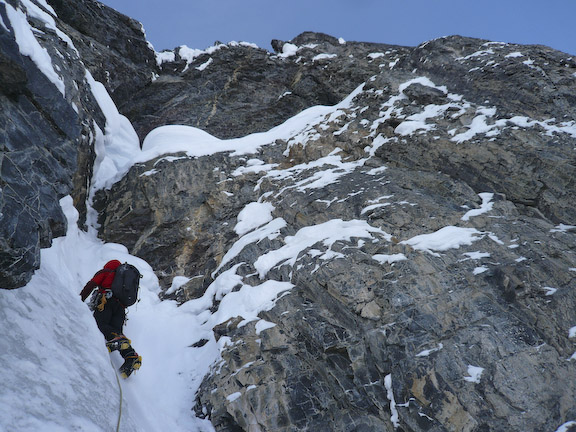 Vince starting a pitch on the second day. He went up about 15 more feet and then followed the obvious snowy ledge out to the prow of rock on the left. From there we continued straight up. 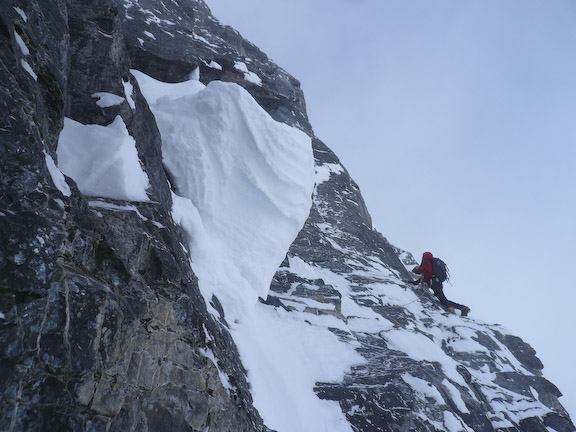 Vince leading the third pitch of the second day. This exploration to the far right turned out to be a dead end and he had to come back to right and continue directly up the upper headwall. 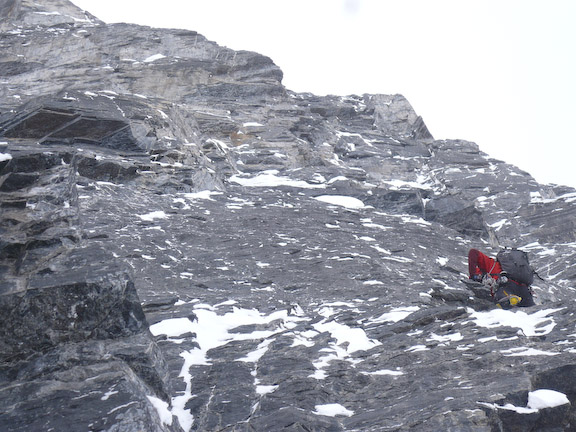 Vince leading the fourth, and hardest, pitch of the second day, which took us straight up the upper headwall. 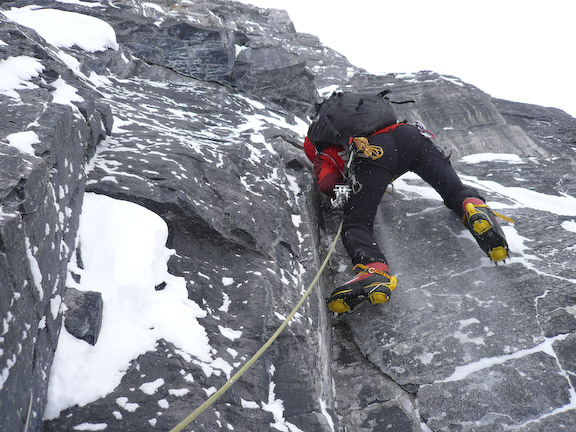 Vince starting the fifth pitch of the second day. What is a climbing slide show without a good butt shot? 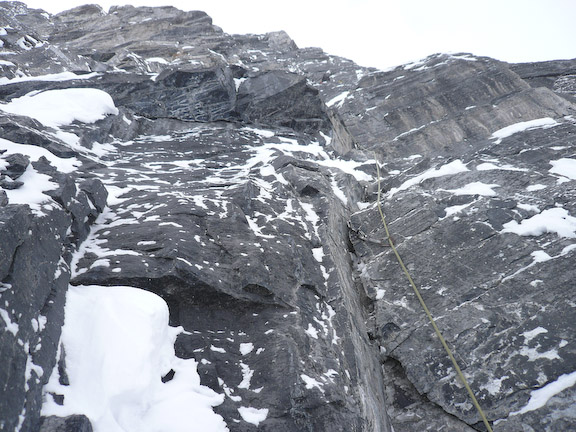 Vince, up and almost out of site on the fifth pitch of the second day. The rock quality was quite good here. Fun climbing but it was starting to snow again. 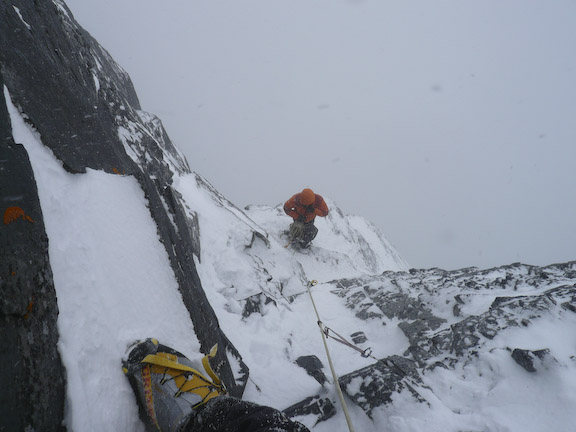 I took over for the last couple pitches up through the upper-most part of the face. This lower angle mixed ground lead us to the summit ridge. Here Vince is trying to stay warm while I try to snap a shot and then lead quickly. It was pretty cold as you can see he is now belaying and climbing in his DAS Parka. 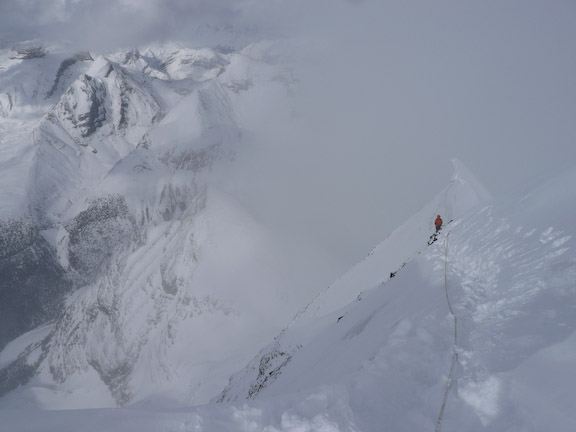 Vince on the upper northeast ridge of Mt. Alberta. Once we got to this ridge we followed it for two pitches to the summit. The sky cleared just a bit and we got a few nice views down the valley and had better visibility for negotiating the cornices. 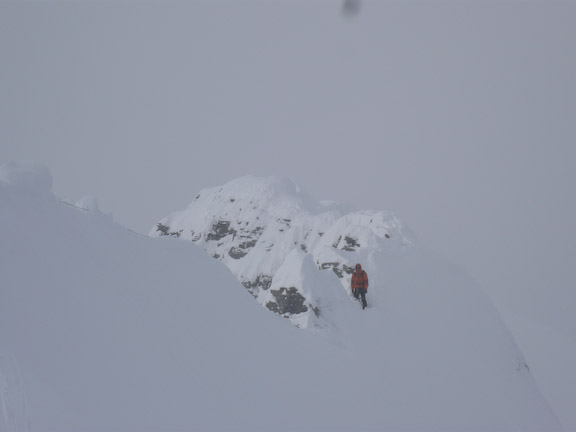 Vince just a few hundred feet along the descent down the very snowy Japanese Route. The Japanese Route is Mt. Alberta’s easiest route to the summit and the line of its first ascent. 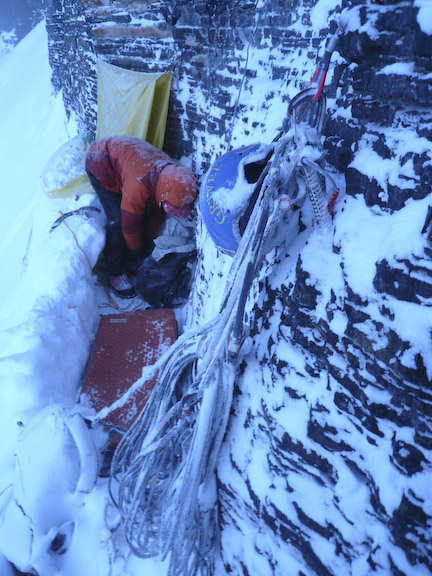 Vince at the second bivy, most of the way off the mountain. We started down the Japanese Route and got off-route in the dark and were forced to make a very cold bivy here until sunrise. The morning found everything looking pretty frosty, but we were able to figure our position from the photos and get off in five more rappels. 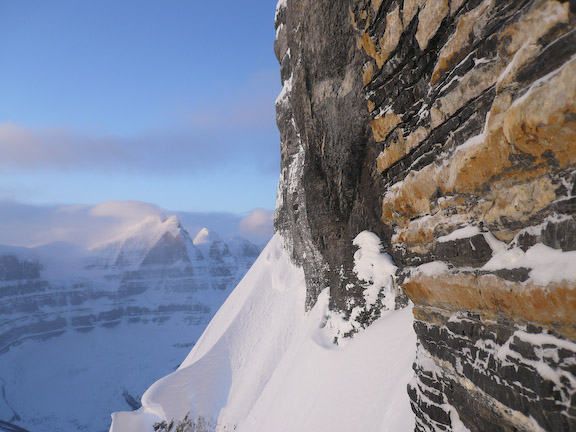 A rare band of quartz accentuates the warm colors of dawn rising over the very cold North Twin with the Columbia Icecap hidden in its usual cloud cap beyond. 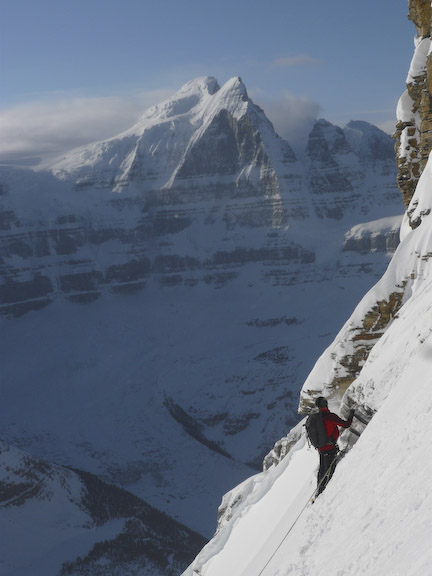 Vince rigging the second rappel on the third day of our little Alberta adventure. This is the one rappel where we were forced to rap off a single Metolius cam (and one of the new single-stem units too)! The left side of the biggest wall (the North Face of North Twin) is where Marko Prezelj and I climbed to make the third ascent of the face via a variation of the Lowe-Jones route. Some of you may remember the story of how I dropped a boot-shell from high on that face. I wonder where that boot is now? For the full story of that adventure, search out a copy of Alpinist #8. 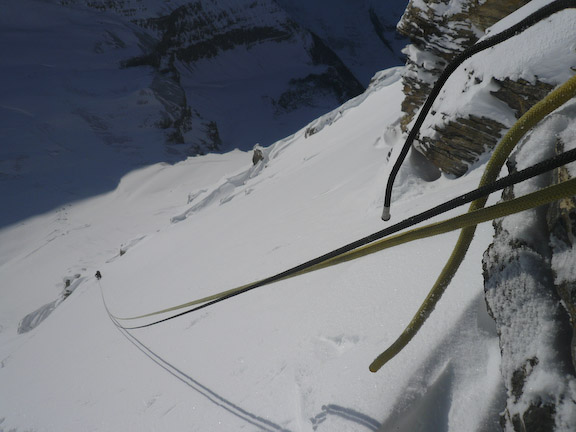 Rapping down, almost to the glacier, where we can walk back to the hut! 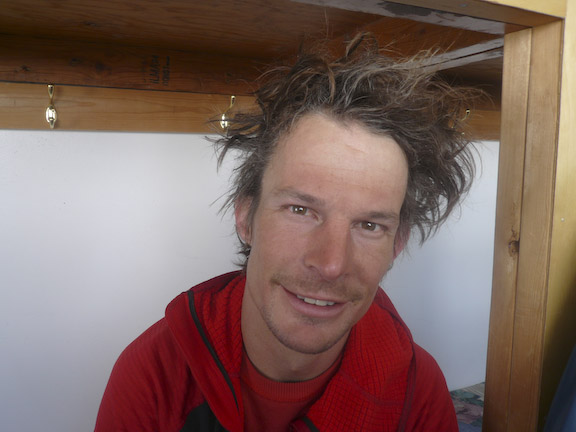 After two hours of wading through snow, and occasionally crawling across unsupportive (snow) crust I am back at the hut, waiting for a grilled quesadilla! Hungry and tired. 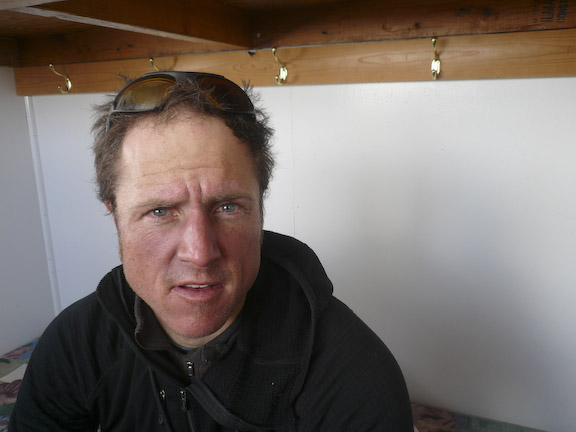 Vince: Tired but feeling fulfilled after a really good adventure. The eyes say it all.