Another in our occasional series of posts for the more visually oriented. This one goes out to all those lucky enough to charge off the couch and into the unknown without looking back or thinking twice . . . or doing much thinking at all, for that matter. – Ed 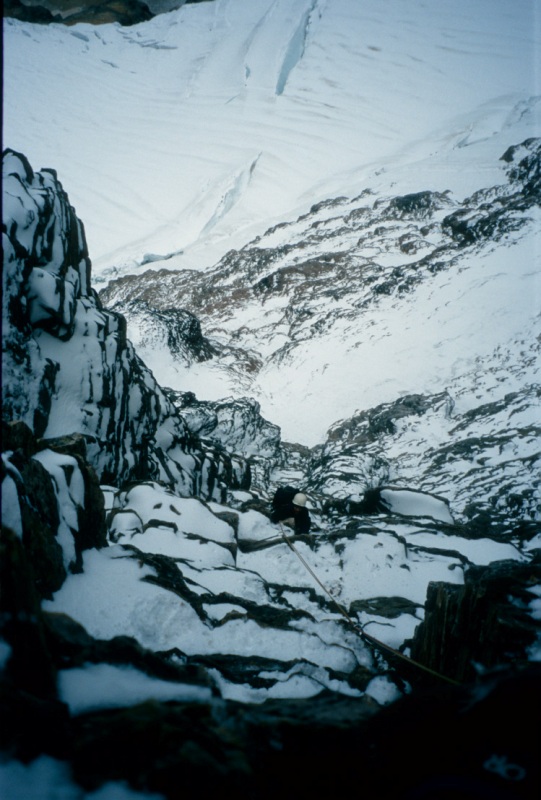 This photo is from one of my earliest technical alpine climbs, the north face of Mt. Edith Cavell some 15 years ago, when The Chief and I zipped from Missoula to the Canadian Rockies in his dented, pea-green Honda Civic hatchback, “The high-speed pod.” (coincidentally, I currently drive a Civic hatchback of about the same year – different color, though). We bumbled into the trailhead parking lot near midnight in a low-cloud drizzle, opened the doors and rolled-out with a bunch of empty beer cans (this was a long time ago, and we were a lot stupid), slept for a few hours, overslept, got lost immediately upon leaving the parking lot, realized at sunrise that we’d mistakenly approached beneath huge seracs, made a hasty traverse and eventually found the general vicinity of the route. In the dark the night before, while packing, I’d insisted we needed only one ice axe each. “Looks easy up there, dude,” I said. “It’s only 5.7.” It might have been reasonable to check the weather and conditions before leaving. Conditions – including our own.

[The Chief just before a blizzard rolled in, midway into a minor epic on the 4,000-foot, 5.7 north face of Mt. Edith Cavell, first climbed in 1961 by Fred Beckey, Yvon Chouinard and Dan Doody. Photo: Kelly Cordes]