Another in our informal series of posts for the more visually oriented. Today's is from Kelly C, who's still on the mend after last week's shoulder surgery. Earlier picture stories can be found here (1, 2). – Ed 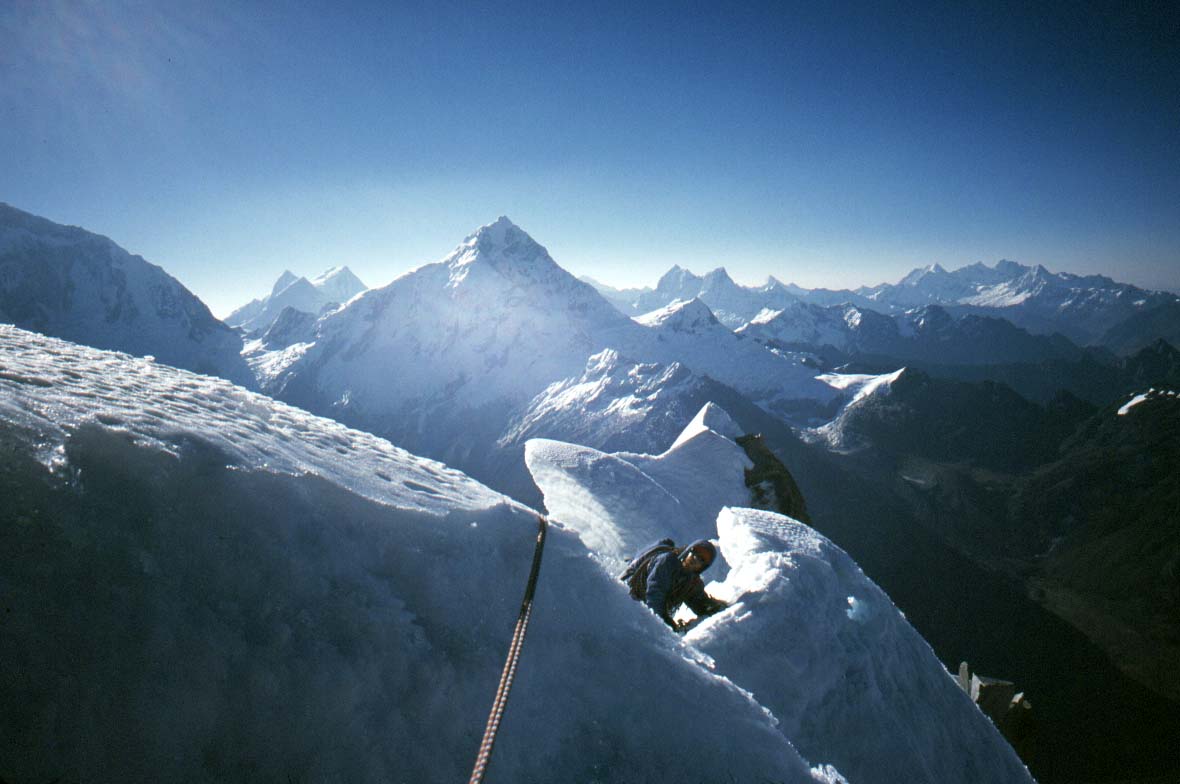 Jim Earl crests the north ridge en route to the summit of Nevado Ulta, on the first ascent of Personal Jesus, in 2003. We’d pushed hard, through difficult climbing on the north face, taking 20 hours on the face and we summitted about two hours later. True to form and stupid, we blew-off acclimatizing beforehand and around the time of this photo my memory grows hazy. The sun soon set, and in the dark I followed Jim’s lead up a mixed pitch in which little Peruvian men began speaking to me. They were short (about three feet tall each), fit, cheery little guys in tight T-shirts, like ambassadors for “Climb Peru” who appeared in a cartoon-style bubble whenever I’d use the ice, rather than rock, on the mixed pitch. Peru, in case you don’t know, has a justified reputation for horrendous snow-ice that often offers desperate climbing, especially along its peaks’ ever-present double-corniced ridges. Anyway, I’d swing into the ice and they’d appear: “Hola amigo! You see, we have good ice here in Peru! Very good ice! You should tell your friends about our fine ice!” I remember nodding in acquiescence, not wanting to piss them off – I’m not sure why, I mean, they were only three-feet tall – but I’d silently (I hope) reply in my best diplomatic tone, “Uh-yea-yes! Yes, you have very good ice here, I agree that it’s gotten a bad rap,” they’d look at each other with smug grins and nod, and I’d reaffirm as I’d scrape through crappy sugar snow: “I’ll be sure to go home and spread the word.”

All true, and it makes for a funny story now, but it’s also an experience we were lucky to survive. We endured a harrowing descent – something like 22 rappels down an adjacent face – in which Jim took a big fall onto the first anchor off the summit, a massive avalanche washed our path (where we’d be in a half hour) midway down, and, stumbling around in the talus at the base afterward, we somehow got separated from one another and rejoined many hours later back at our bivy. Jim’s lungs gurgled with HAPE, and I don’t remember large chunks of the ordeal. It was far too close, and we got lucky. Maybe the little Peruvian men helped guide us down, but since then I’ve tried to pay more attention to proper acclimatization.﻿﻿