Professional photographer and Cleanest Line reader, Scott Dickerson, contacted us recently about a unique aerial shoot he did with the US Coast Guard, University of Alaska, US Geological Survey and the World Wildlife Fund. It involved documenting a report of nine polar bears seen swimming amongst melting Arctic ice. He wrote about the shoot on his blog and gave us permission to reprint the story and photos below. Scott lives in Homer, Alaska and is a proud member of 1% For the Planet. He can be contacted through his Web site. 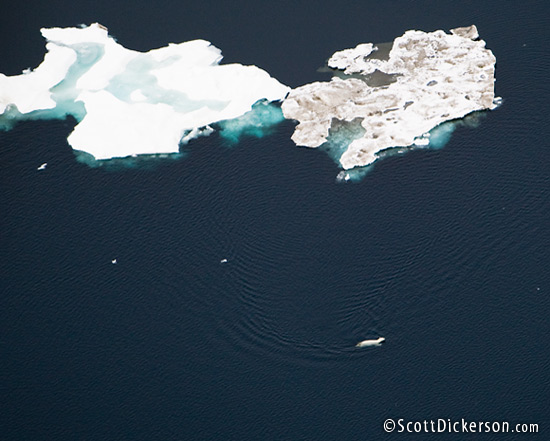 The adventure started with a phone call last week from the World Wildlife Fund – “Scott, can you be on Kodiak Island tonight for a flight to the Chukchi Sea?” Before I could think I answered, “Sure, what time?”

Slowly I learned the details of the assignment as I packed my bags. Nine polar bears had been sighted swimming in the Chukchi Sea many miles off Alaska’s Arctic coast. It was a rare opportunity to fly with the Coast Guard and polar bear biologists on a survey to see firsthand the polar bears’ plight as the sea ice they depend on melts away beneath them. This was an impressive example of agency cooperation amongst the US Coast Guard, University of Alaska, US geological survey and the World Wildlife Fund. Steve Rychetnik, videographer with Sprocketheads, and myself were brought along to document the effort.

Our team met in Kodiak, home of the Alaska Coast Guard Air Station.The next morning we were at the base meeting the flight crew and discussing the plan as we boarded a monstrous four-engine C-130 rescue airplane that would take us over 1,000 miles north, stopping in Fairbanks for fuel, then onward to Barrow to pickup additional Coast Guard personnel. We left Barrow and flew out over the Chukchi Sea and spent five and a half hours looking amongst ice floes for signs of life. We would fly for12 hours total before landing in Fairbanks later the same evening.

Finding a white bear amongst an ocean of white ice floes while flying at 200mph turned out to be a challenge. Thankfully the flight crew letSteve and I shoot out an open side door in the back of the plane.Unfortunately, from that position we had no communication with the rest of the crew who where helping each other find the bears by talking through their headsets. In the roughly five hours of searching, five bears where spotted. Through a stroke of good fortune I managed to snap a few shots of one swimming bear. Not exactly the closeup photo I was dreaming of, but considering the challenge of spotting and photographing the bear in the 2-3 seconds that it was visible out the door, I’m grateful for what I did get. The take-home lesson was that next time I’ll make sure I can at least hear what the pilot and rest of the crew are saying.

The greater story behind this mission is the fact that the sea ice these bears depend on for food and habitat is melting. The distance between the year round ice pack and land is growing rapidly and the amount of suitable broken up ice floes between is also diminishing as the water temps rise.

You can hear a great NPR interview here with Margaret Williams, Director of WWF’s Alaska office. Also from WWF, here is a news release about the initial bear spotting that was the big motivator for making this trip happen. 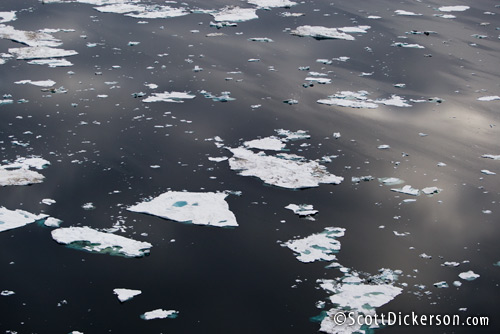 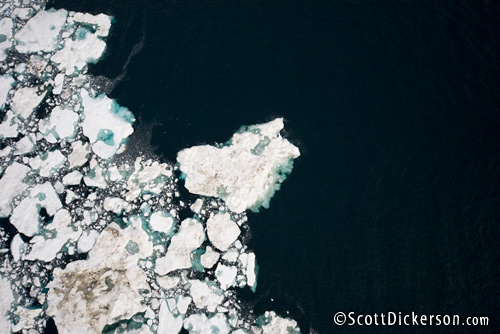 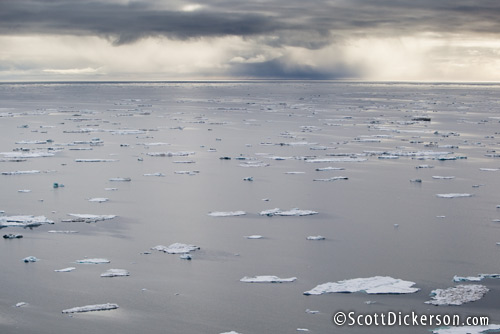 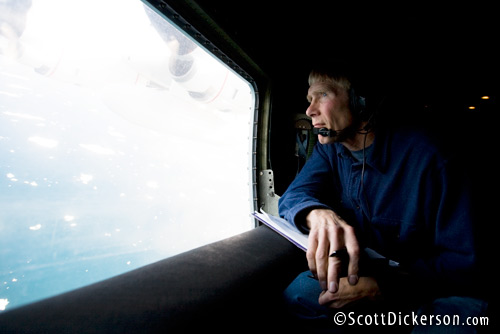 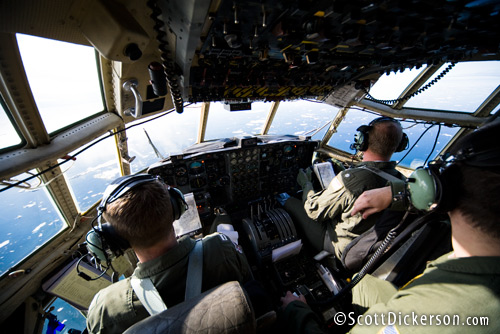 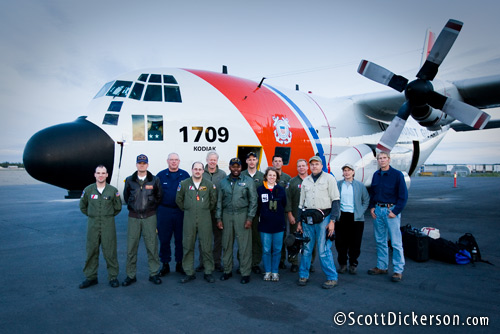 Once again, you can see more photos in my stock archive here.

For my fellow photo enthusiasts: Remember that when shooting aerials it’s very important to have communication with the pilot, especially when trying to photograph hard to find objects! I learned the C-130 is not an ideal air to land photo platform, despite the pilots doing everything they could to help. I wouldn’t hesitate to fly in one again, but my dream shot list might be a closer reflection of what’s realistically possible. The photographs were taken with both a Canon 1D mark III and Canon 5D, lenses ranged from a Canon 70-200mm f/2.8 IS on the long end, to a Sigma 12-24mm for some wide interior shots. The back of the C-130 where I spent most my time is very dark and I appreciated the great high ISO performance of the relatively new 1DmIII camera for shooting portraits there. Any questions, don’t hesitate to ask in the comment box below.

Our thanks go out to Scott for sharing this story with us. Be sure and check out his portfolio, especially cool (!) are his shots of surfing in Alaska.

Scott Dickerson is a licensed USCG captain for Ocean Swell Ventures and proprietor of Surf Alaska, boat based surf adventures are one of his primary production platforms. Scotts passion in life is visual storytelling and he strives to craft a life that is a story worth telling. Scott lives in Homer, Alaska with his wife Stephanie and their son Riley.