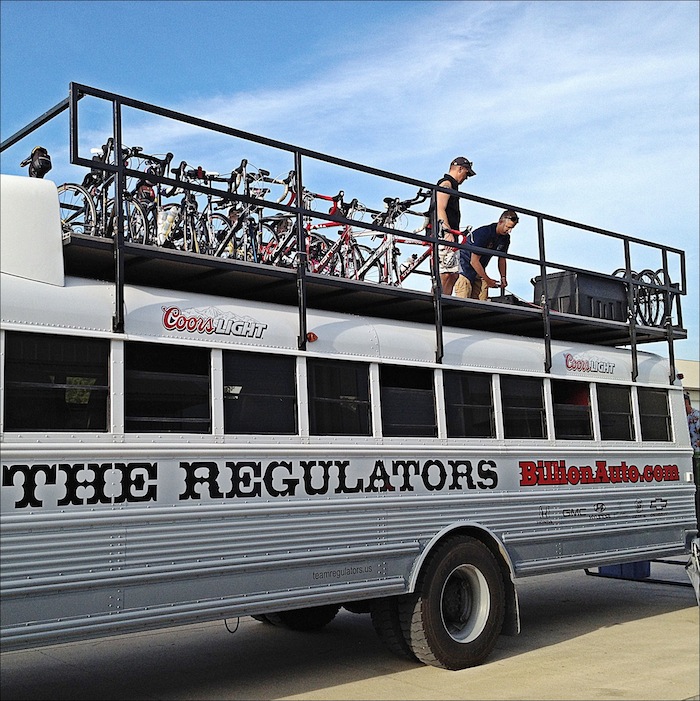 I was actually pretty anxious about going on RAGBRAI. I didn’t really know what to expect. I travel extensively to the far corners of the world, but always as a climber, with the security of other climbers and knowing, to some extent, what the climbing experience will be like.

Editor’s note: If you missed it, check out Brittany’s pre-race training post before reading on.

As I sat delayed in the Minneapolis airport awaiting my flight to Cedar Rapids staring blankly at the flight information screen, I started to fret. I only knew my uncle. Would the remaining 18 people that made up the Regulators (who were mostly cops) like me? Think I was an idiot (I still hadn’t sat on a road bike)? Go to bed at 8pm and wake up before dawn? Know that I have unpaid speeding tickets in three states? Would they make me wear a purple wig?

Some of my fears were dispelled upon seeing the team’s bus. It was bigger than the Gypsy Van, had a full-sized storage freezer turned giant cooler, and stripper poles. 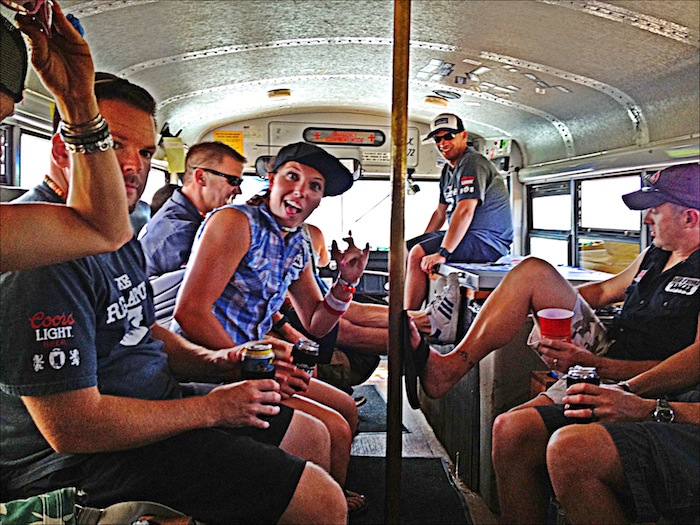 The first morning I woke up an hour before everyone else and waited inside my tent, fully dressed and ready to go. 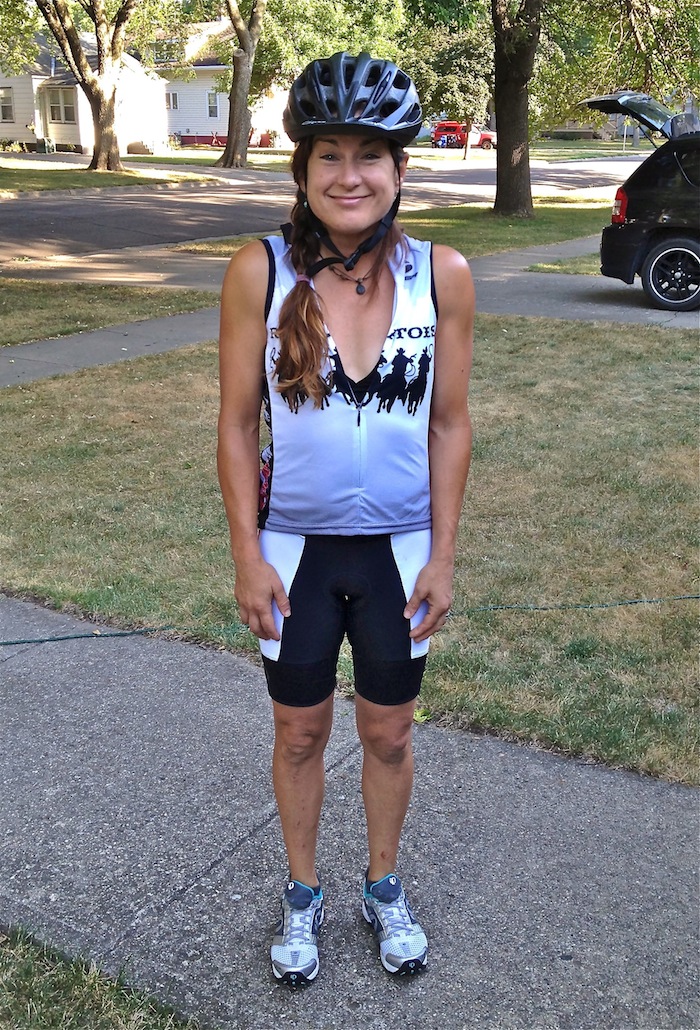 After the first day, I realized that the bike riding part was easier than I expected, the drinking more difficult (I now attribute my iron liver to my Midwestern roots), but what I didn’t at all anticipate, was that many of the things I love about climbing and our community, existed in this community. I immediately sensed that this “team” was not like any other team I’d ever been on. Not like a track, basketball or softball team, but more like the teams we have as climbers. In climbing, there isn’t an end all goal which is winning the game, it’s more about making the entire experience as safe, efficient and gratifying as possible for all. 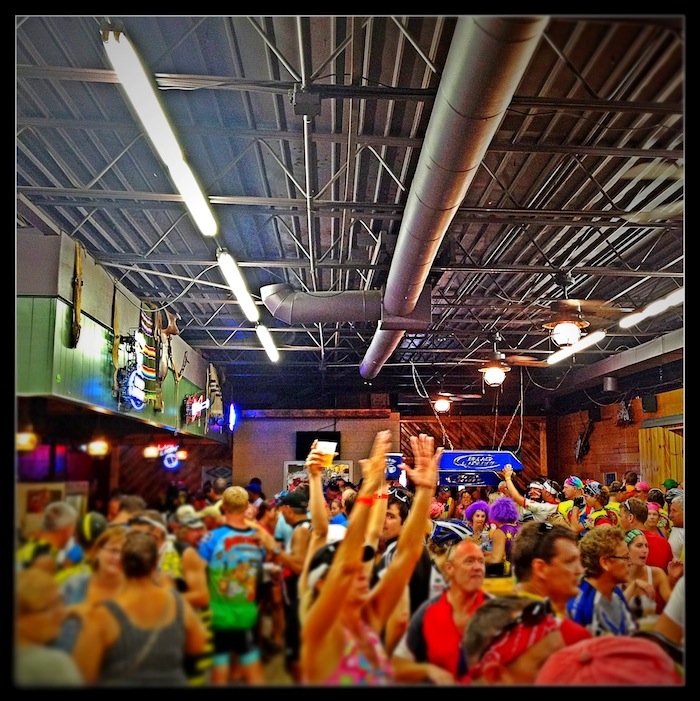 Beer Garden Overflow. My first day of RAGBRAI, after 14 miles, it was 9:30 in the morning. Notice that there are actually people wearing purple wigs. Photo: BAG iPhone

My teammates, despite having only known me for a few hours, looked out for me from the very beginning.

“Utah (my new nickname)! Unclip from your pedals!” Amber warned as we rolled into the first town, crowded with spectators and cyclists.

“Utah! Stay in the middle and downwind side of the line!” Matt shouted as I struggled to keep up in a fierce cross wind.

“Let’s go, it’s our turn to pull” Kelly said. And even though it was downhill and we had the wind at our backs, it felt really good to do my part at “leading.”

Just like trusting the person holding the other end of the rope when climbing, there is a level of trust required when riding a couple inches off someone’s wheel in the draft line (and after six beer gardens, it’s brought to a whole new level). 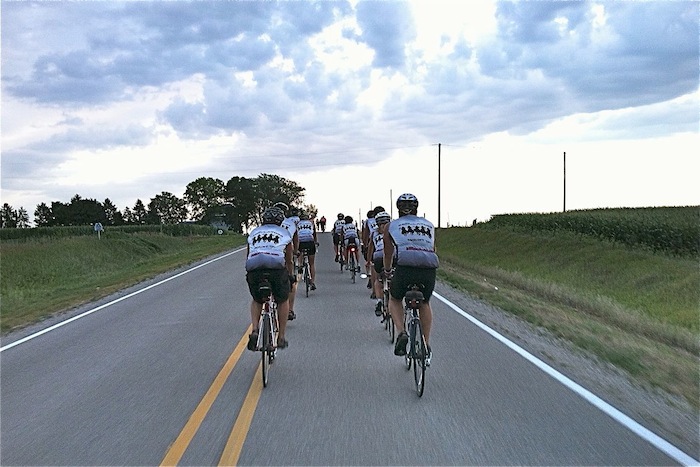 Weather and imminent darkness still scared me, even on RAGBRAI. Just like in climbing, I’m the first one to turn on my light. Photo: Tony Robinson 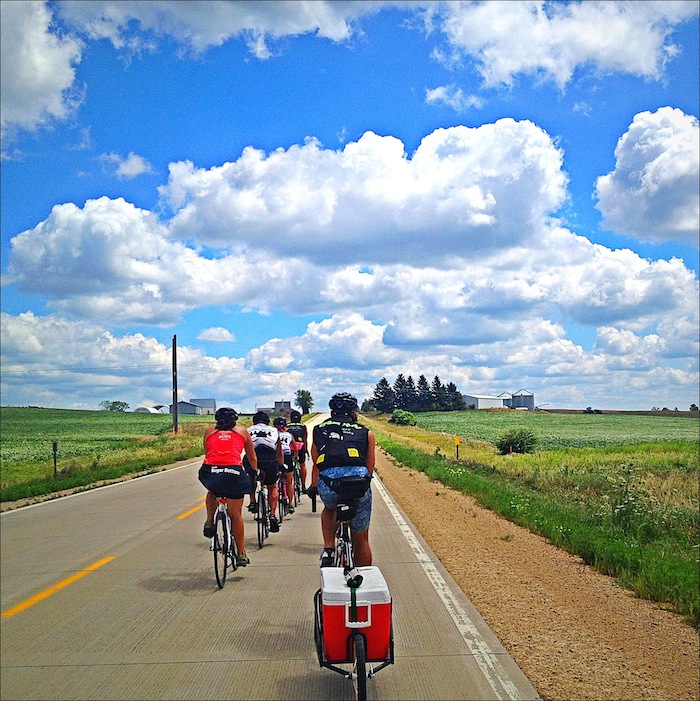 Light and fast was not a concern. Photo: BAG iPhone

Lots of people enjoy RAGBRAI for the opportunity to ride and meet other people along the way. Me, I just really really liked being with my team. I wanted to ride with them all day and was super content to just sit in a lawn chair at camp (which was usually a friend of a friend of an acquaintance’s or second cousin thrice removed’s front yard) at the end of the day’s ride.

Much like climbing, the activity of pedaling a bicycle wasn’t the main attraction for me. I’ve always maintained that the act of climbing is only exercise, no different than jogging on a treadmill or swimming laps in a pool. But what makes climbing so special, and so addicting, are the bonds that are formed with the people while participating. I hadn’t felt this way about anything other than climbing until now.

When I leave my climbing partners at the airport after an expedition, or drive away in different directions in the van after a long climbing trip, there’s a panic in feeling like I don’t know what I’ll ever do without them. They’ve become everything to my everyday existence; we’ve climbed, eaten, drank, slept, struggled, suffered and laughed together and deep down I know that I might not see them for another year, or longer, or ever. I felt this way getting off the bus for the last time.

I’ve been a climber for nearly 20 years; it’s everything I know – my passion, my community, and my job. But for one week, it was nice to be a part of something new, something different, yet the same.

Thank you Regulators for taking such good care of me and letting me be part of the team. 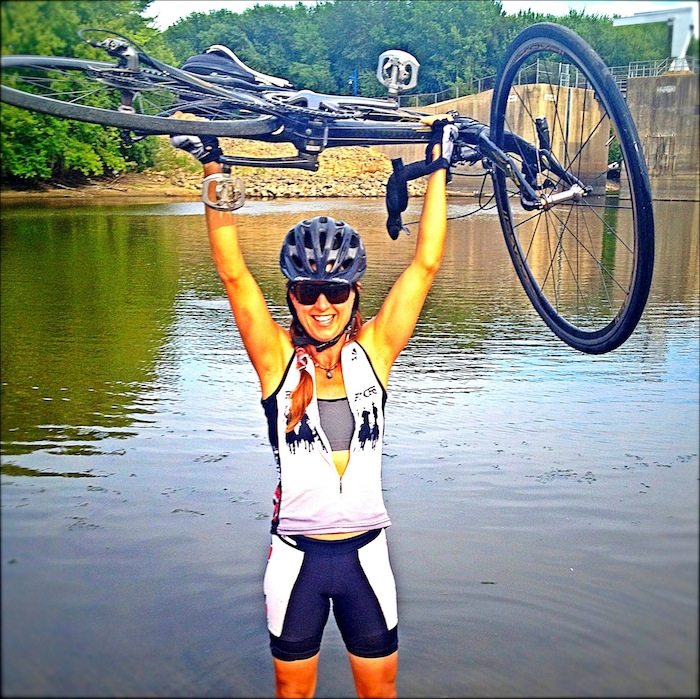 Mississippi summit, one of my proudest. Photo: Kelly Baughman

Here’s a nice recap video that was published by The Des Moines Register: