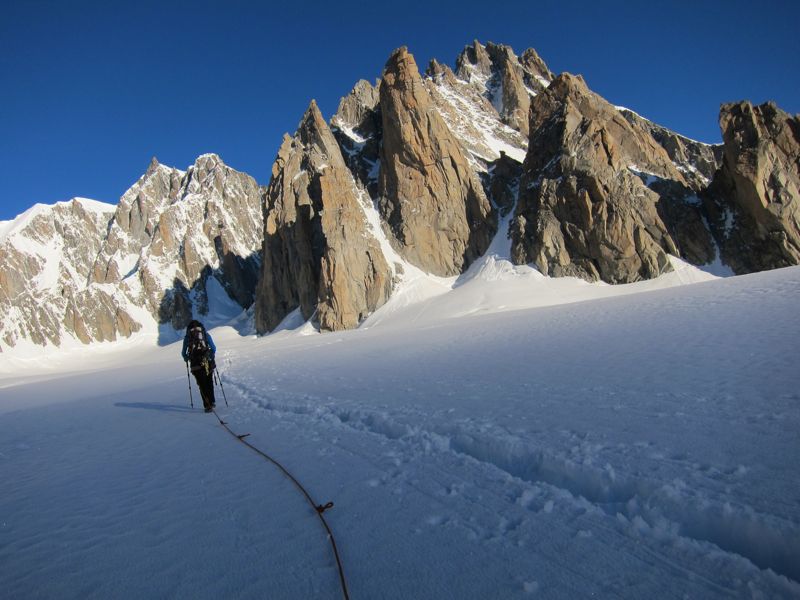 Ahhh, sleep. Sweet sleep. I drifted off to the soothing sounds of a jackhammer. They’re doing construction at the Torino Hut. 24-7 construction. I’ve long thought of loading my music player with tracks of peaceful sounds like waves gently crashing, the pitter-patter of rain, or birds chirping on a beautiful spring morning. Or maybe a jackhammer.

At 5 a.m. I dragged my groggy ass out of the bunk, stumbled down the stairs to the barely passable breakfast (but with a huge cup of coffee, thank Baby Jesus), and Janet Bergman and I walked the leisurely hour-or-so across the glacier to the base of the Grand Capucin, a spectacular spire on the Mont Blanc massif. Janet was in Cham for the same reason as me – we’re on Polartec’s Athlete Advisory Board, and this year’s meeting was in Chamonix. Devastating, I know. She was en-route to India, where she’s meeting some friends and her husband, also a friend of mine, Freddie Wilkinson, for an expedition. Me, I’d just slaved away for a couple of months with work, including shipping the American Alpine Journal, hopped a plane and asked them to book my return for two weeks after the meeting’s end. Perfect timing, too, as I’d just gotten cleared to return to the mountains following my last round of surgeries. Sweeeeet.

The jackhammer kept jacking. Sleep doesn’t normally trouble a guy as lazy as me. It probably helps that I’ve tried hard to keep my life relatively simple and low budget, trading some things for others. Shack life, a compact beater car, no children and mostly part-time employment might not work for everyone, but it does for me. As the saying goes, “At either end of the social spectrum there lies a leisure class.” Tack on the joyful exhaustion of days in the mountains, and drifting into peaceful sleep comes naturally. Used to, anyway.

But life happens, of course, and it sometimes made my head a mess. A two-year flow of people I love dying, and suffering tragic illnesses, got compounded by my own debilitating injuries (and those damned evil-but-necessary-during-recovery narcotic painkillers). Compounded? But they’re unrelated…. Sure, except that I use climbing to deal with everything else. Well, sheeeeit.

To be sure, I know that I’m a lucky guy and I’m grateful for everything. Every loss reminds me even more. I just miss good sleep. For better and for worse, for me everything’s better when climbing. I swear to god the world literally looks brighter to me when I’m climbing. A couple of months ago, on my first day climbing outside after the last three surgeries (of six), though I pulled on a draw on my first route and fell on the second – both 5.9 sport routes and both on top-rope (thus bringing the decidedly un-bright thoughts of “I suck. I am most definitely the worst climber on the planet.”) – the skyline literally looked sharper, more vibrant, than it had in seven months. As if I’d been wearing smudgy sunglasses and just adapting to the view. For days afterward I glowed. It’s the blessing and the curse of something you so love: when you have it, everything is sharper, brighter, better, your mind quieter and your thoughts clearer. But you can lose it all so fast. And then what? I know, I know, there’s more to life than climbing, and I worked on those things. I truly did. But damn, none of them are as good. Not to me.

Anyway, enough of that. So Janet and I climbed the Grand Cappucino (I never can pronounce it right…), and indeed my afore-mentioned babbles proved true: everything looked stunning, spectacular, and felt real and alive. Then we returned to our bunks and the jackhammer started to sound like those soothing waves (OK, so sometimes I exaggerate). The next day, more climbing – an easy classic, the Dent du Geant – ahhh, yes, it slowly returned, that familiarity for the mountains that I’d so missed. That comfort. I remember a grin crossing my face as I thought, Maybe I do still know how to do this. 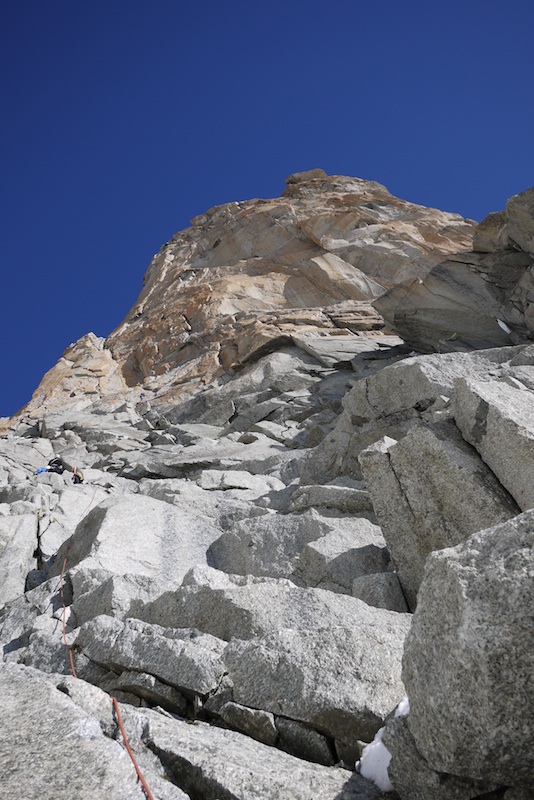 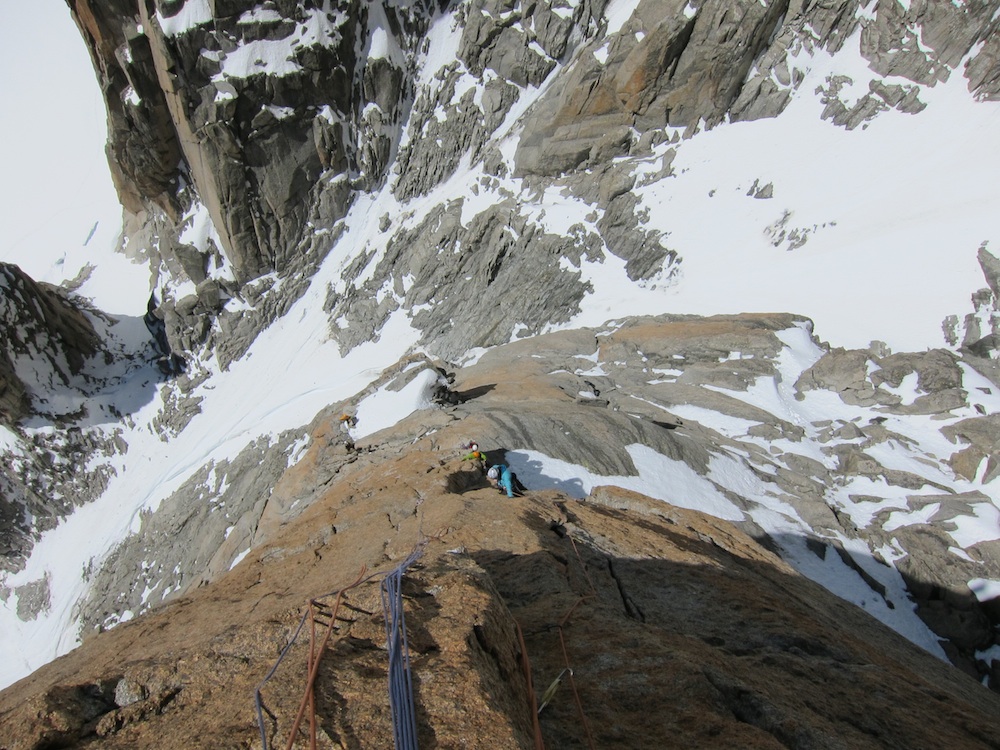 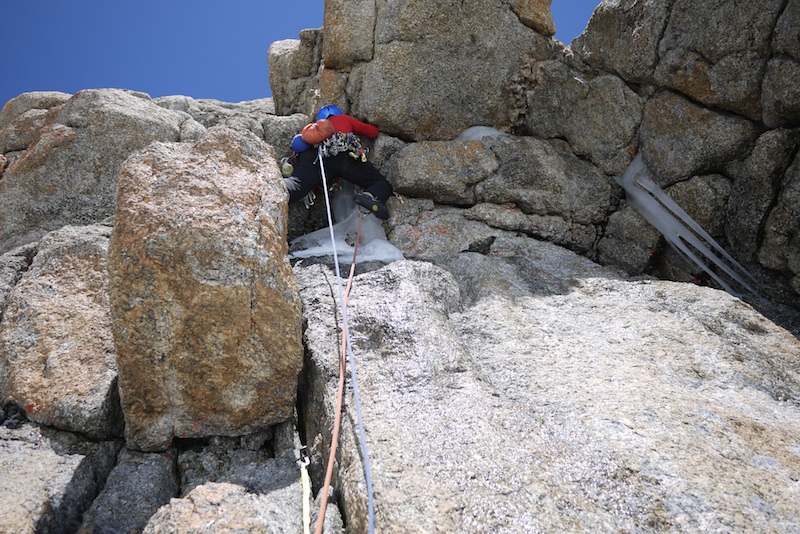 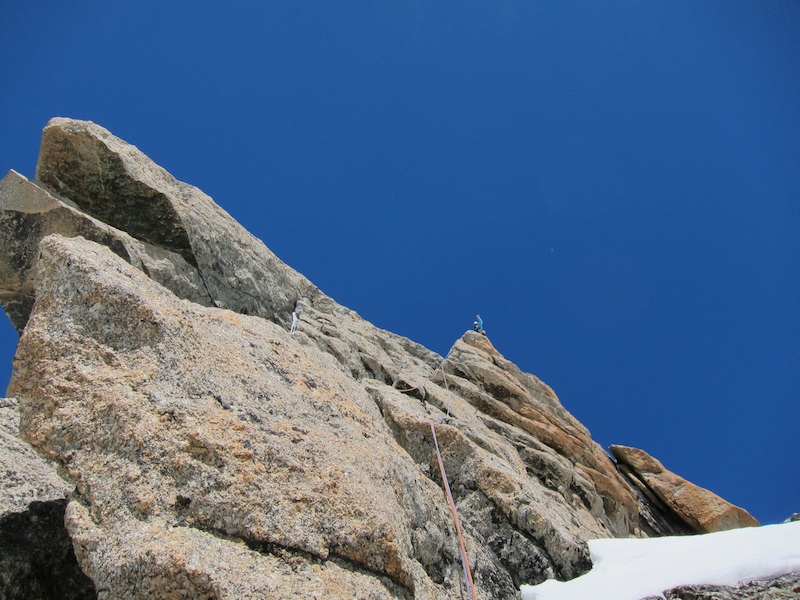 Janet Bergman cruising toward the summit of the Grand Capucin. Photo: Kelly Cordes

We hopped on the bubble lift across the massif, then down the Midi to Cham, had a burger and a beer, a rest day, and then, suddenly: Only one climbing day left. I hadn’t swung my ice tools – both tools, real ice and mixed climbing – since Feb 1, 2010, the day I destroyed my leg. Just walking out the narrow snow ridge on the Midi sketched me out last time. Best go rock climbing, dude.

So for our last day? Ice climbing. Just a day climb, something easy. Triangle du Tacul. Maybe the classic Chèré Couloir. We walk out of the top of the Midi, along the foot-wide snow ridge – OK, not so bad this time, I remember this – and toward the face. Left of the classic line, a series of thin ice and mixed runnels. Maybe worth checking out? Don’t get cocky, dude – just the other day you were tripping on your crampons. Might as well try; figure I’ve been doing this for 17 years, it’s a part of me – pathetic as that may be and all – which has gotta count for something. Yeah, like a broken leg. Shuttup. No, you shuttup!

Fifty feet up the first pitch, on a beautiful wisp of thin ice, that damned voice again breaks my silence: Ahhh, I know you. 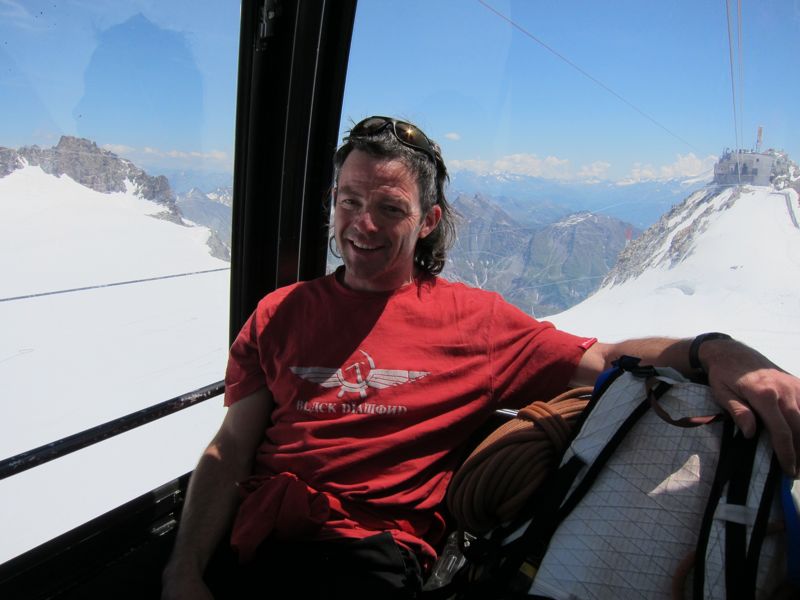 Is it mullet boy, or a member of the Spanish soccer team cruising across the massif on the bubble lifts? Photo: Cordes collection 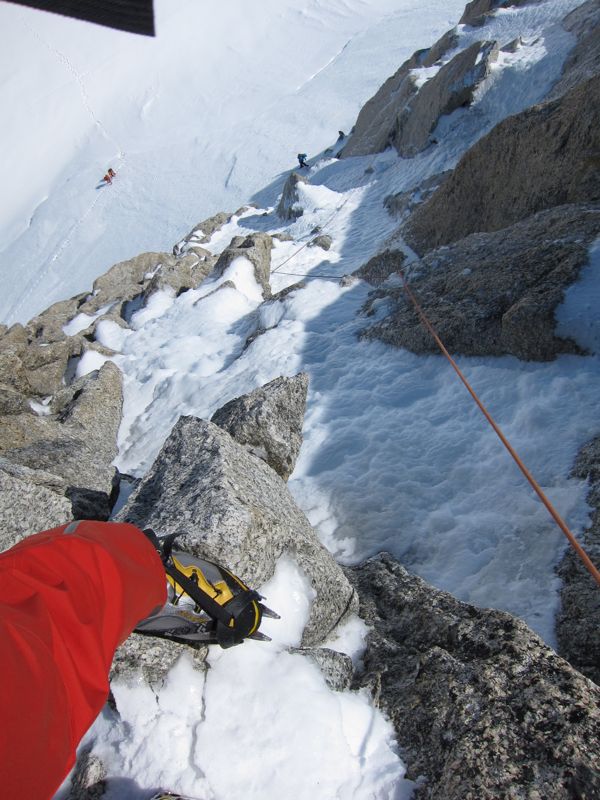 Looking down from my first ice lead since the day I broke my leg. Photo: Kelly Cordes 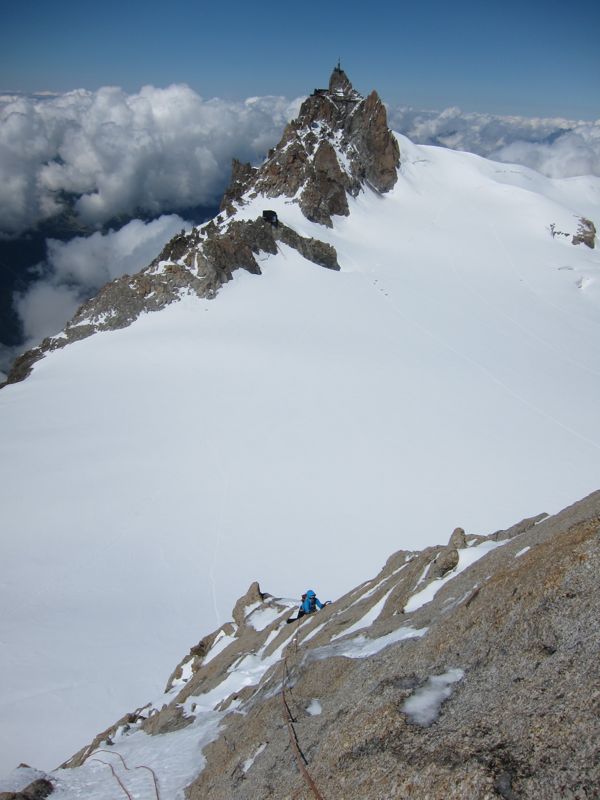 Five pitches flow by perfectly, just like they used to. Maybe I’m a little slower than I was before but I don’t care; the air has that taste just like I remember and the cloud layer above Chamonix sits below us like we’re climbing out of the ocean and everything looks so crystal clear I don’t know how to describe it.

That night, back at the apartment in Chamonix, I lie down and fall into a long, peaceful, dreamless sleep. Just like the kind I used to have.