We test our gear on a variety of levels. Our 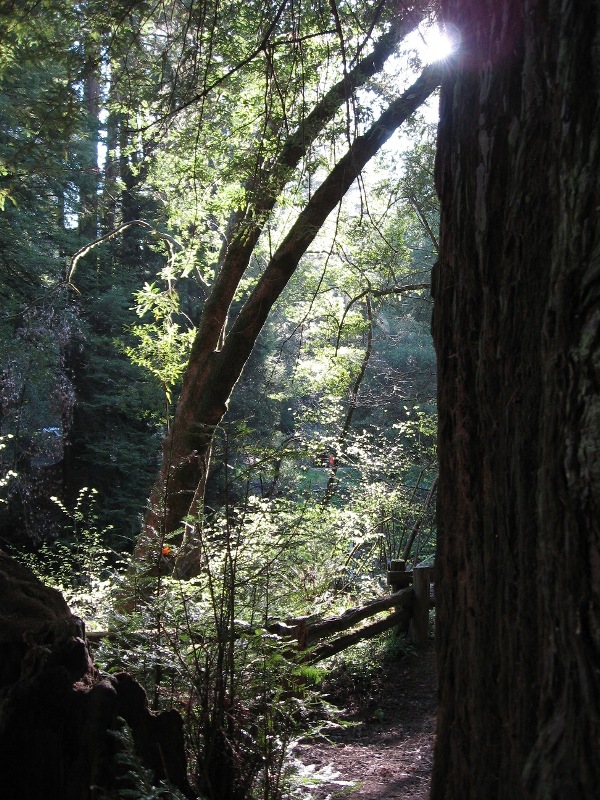 As I’ve gotten older my lack of sanity manifests itselfin different ways. Fifteen years ago my friends referred to me as the wild onesince I was always up for partying, loud music and any adventure life wouldthrow at me. Long gone are the days for too much partying, but nevertheless Iwill never let go of the adventure. This time, I decided to take my very newlypotty-trained 3.5 year old son on a camping trip and to go catch the gray-whalemigration out at Point Reyes in MarinCounty, California,all on my own. My husband was going to stay home and peacefully recover fromoral surgery.

I know the area well, as I grew up in Mill Valley, California.Samuel P. Taylor Park, outside of SanRafael, is a beautiful campground with lots ofamenities set in a gorgeous Redwood Grove with Lagunitas Creek running rightthrough it. The forecast was exceptionally good. Even at Point Reyes Stationthey called for 77 degrees and clear skies. I was so excited to enjoy some warmspring weather, the scent of the ocean, to bond with my son, and give himlessons about the wonders of nature and how we need to protect it. 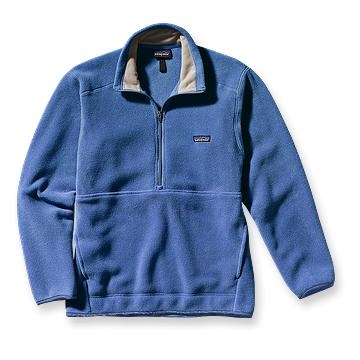 We arrived at the campsite, and my son was thrilled thathe had logs to climb on, “caves” inside of the trees to explore, and was on thelookout for skunks. I broke out a Fat Tire from the cooler, realizing thatrecently my bottle opener had disappeared from my keychain. No problem! I hadmy “O” Web Belton. I love this belt, but actually using the bottle opener is a bit of achallenge. I laughed a couple of times as there were people witnessing meunleashing my belt (with a small child around no less) in order to open a beer.Nevertheless, it does work. That evening I was joined by some old friends withtheir kids and I ended up taking a pretty good spill on top of a pile of logsnext to the campfire and, much to my surprise, my Synchilla Marsupial got a littledirty but it didn’t rip. I would’ve expected it to. But the true field testingwas to come the next day, out at the point. 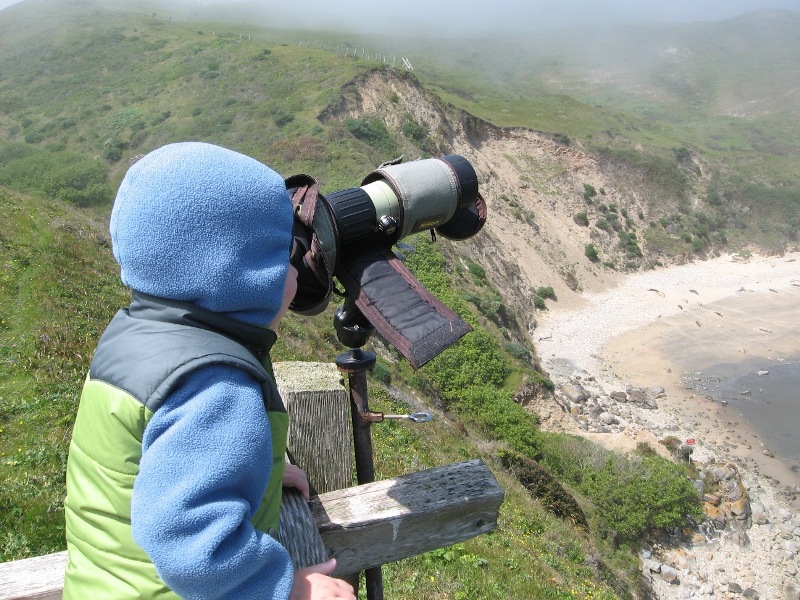 We packed up our lunch the next morning after breakfastand Zachary put on his Kids’ Trucker Hat, with the LiveSimply whale design on it. “I want to see whales!” he proclaimed. The air wasstill and we hopped into the car. As we drove over the hill through Inverness, I spotted an old nemesis. “Damn!” I whisperedsoftly to myself. I could see the fog bank sitting out on the horizon. Buthaving grown up in Marin, I also realized that it could be burning off, but Iwas wary. Fog and I go way back, and the relationship is a turbulent one as Iam a sun worshipper. 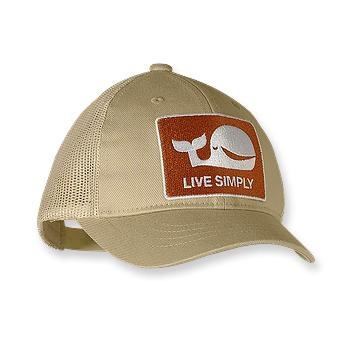 The drive was beautiful and we saw plenty of deer, cows,chickens and the views were spectacular. I could see that the fog was burningoff as we plowed further out onto the peninsula. Our first destination was thePt. Reyes Lighthouse. Zachary had downed some juice by that point, and my firstpriority was getting him to the bathroom. The only toilets at the lighthousetrailhead are pit toilets, and he told me several times he did not need to go.Being the naïve first-time mother that I am, I believed him. We started ourlittle .25 mile hike up the trail. We enjoyed the songs of the white-crownedsparrow, and admired dew on the leaves of the ice plant that the fog had justleft behind. The sun was warm, but there were blasts of cold as the bank wasstill burning off and sitting right on the water. My car gauge had read 59degrees. I had Zachary in his Kids’ Sky Serpent T-shirt and his Baby Puffer Vest, andI had on my Sender Capris(Ed note: Our closest currently available equivalent is the Inter-Continental Capri) and my trusty but dirty Synchilla Marsupial. We were bothcomfortable when Zachary announced he needed the potty as the stream poured outthe bottom of his pants. We were 50 yards from the toilets (with running water)at the top of the trail. We did at least walk to the end where the lighthousesteps begin (300 of them) down the cliff of the point. We could see the oceanbut the fog had not burned off enough to see any distance so I turned himaround and we decided to head to Chimney Rock. 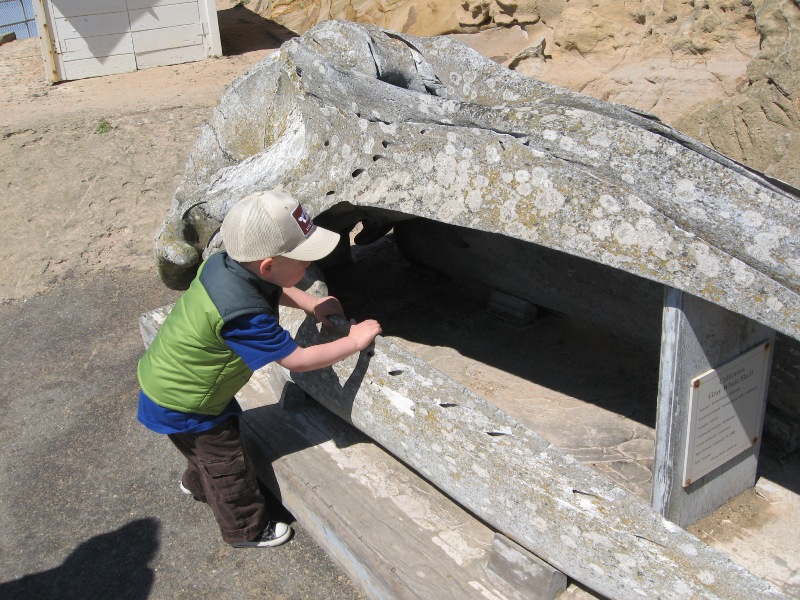 As we reached the end of the trail, I noticed that thevisibility had grown worse, and the temperature had dropped considerably. Thefog was re-generating itself with the warmth of the sun hitting the water. Thegauge read 52 degrees at this point.

I got Zachary changed into dry clothes and put his BabySynchilla Cardiganon under the Puffer Vest. I will say the Baby Synch Cardigan is the mostversatile garment you can own for your kid. I have used this jacket for justabout everything, including snow-play and I will never go anywhere without it!And he loves it. The hood is essential, and became extremely important. Thewind was growing intense and that old nemesis, those icy-cold fingers of fogthat used to plague me as a kid were causing me to flashback to the '80s. Iwould ride my Honda Elite scooter overlooking Muir Beachon Panoramic Highway with OMD playing on my Walkman while freezing my hands off. Nevertheless,Zachary still wanted to see whales and was up for 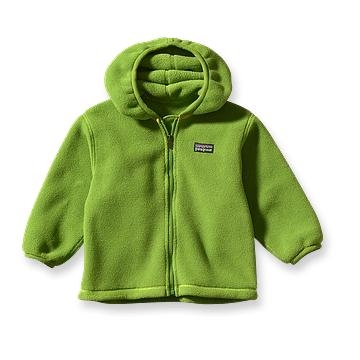 more walking. I threw myHoudini on over my Marsupial, and the battle ensued. The temperature readingnow was 48. When we got to the Chimney Rock trailhead it was obvious at thatpoint that the view would be no better than the lighthouse. I decided to veerleft, where we could walk into the cove to Elephant Seal Overlook. The wind wasbrutal. Zachary’s face was red and chapped as we pressed on to the outlook. Notfar into the trail we could hear the barks of the elephant seals.

“Listen, Zachary, those are the seals burping!” Iannounced. That was all I needed to do to jar his interest, and immediately hestarted giggling. “They’re burping!” he squealed. We got to the outlook, wherethe fog was dangling over the cove, but we were able to see the seals playingwith each other in the water and sunning themselves on the beach. The belchingbecame louder and every time a seal made a “burping” noise, Zachary squealedwith delight and demanded that everyone around us join in on his fun. Hislaughter was contagious in the face of the bitter damp wind and the growth ofthe fog bank that was closing in on us. “That is totally awesome!” anothersightseer told me in response to Zachary’s laughing fit. 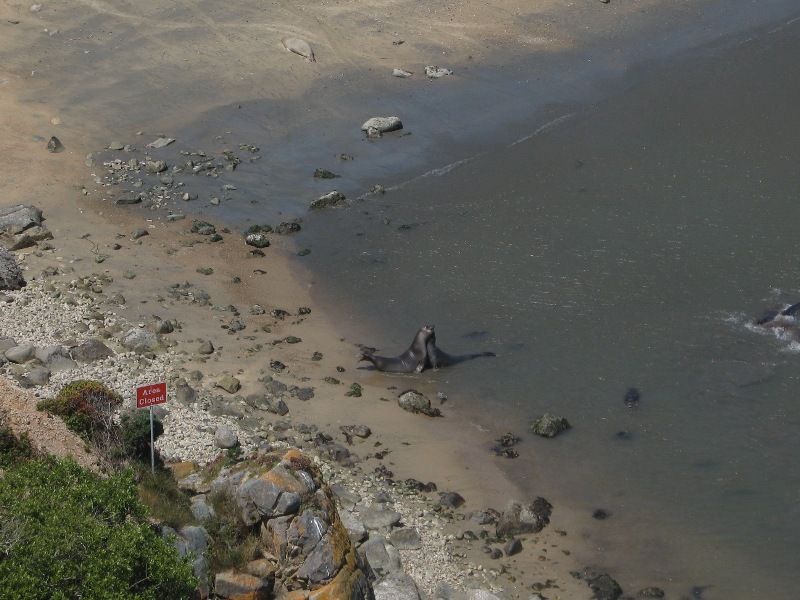 We stayed awhile but then scurried back to the car asfast as we could, with me cursing the old nemesis under my breath. As I buckled Zacharyin though, I could see the wonder in his eyes and the smile was still present.Having been battered by harrowing winds and walking around with soaking wetpants had not seemed to faze him. My lesson was to take in his wild spirit andremember my own, and relish in the adventure rather than what made usuncomfortable for a mere few hours.