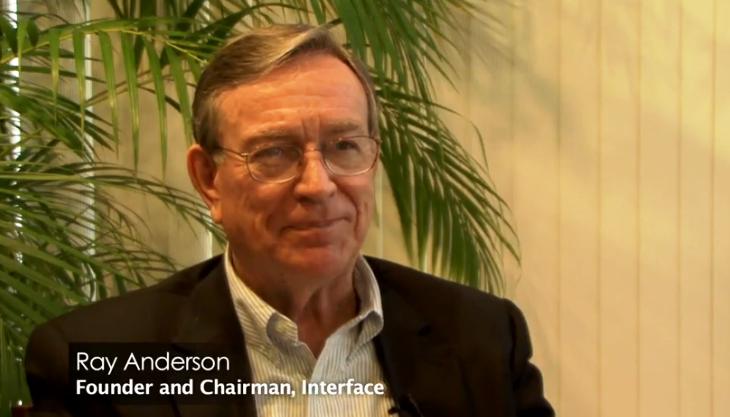 Patagonia’s friend Ray Anderson, the visionary founder and chairman of Interface, died last week at the age of 77. Ray was an intelligent, soft-spoken entrepreneur, engineer, and businessman who, on reading Paul Hawken's Ecology of Commerce in 1994 called it a “spear into my heart,” embraced environmentally conscious business practices, and became a tireless spokesman for better behavior on the part of business. We interviewed both Ray and Paul in our video “What Is Quality for Our Time?” (pictured) which you can find in our Footprint Chronicles and Video Gallery. Paul has graciously granted us permission to post his moving tribute to Ray.

We, who were so fortunate to know Ray Anderson, were in awe. He was many people: a father, executive, colleague, brother, speaker, writer, leader, pioneer. But I am not sure any of us quite figured him out. On the outside, Ray was deceptively traditional, very quiet sometimes, an everyman, all-American, down-home. He was so normal that he could say just about anything and get away with it because people didn’t quite believe what they heard. He could walk into an audience and leave listeners transfixed by a tenderness and introspection they never expected or met. Business audiences in particular had no defenses because they had no framework for Ray.

Was he really a businessman? Yes. Was he a conservative southern gentleman with that very refined Georgiadrawl. Yes. Was he successful? For sure.

Well, then where did these radical statements come from? Ironically, because people could not connect the dots, he was extraordinarily credible. He was also courageous. He stood up again and again in front of big audiences and told them that pretty much everything they knew, learned, and were doing was destroying the earth. He meant every word he spoke and those words landed deeply in the hearts and minds of the hundreds of thousands of people he addressed. There was no one remotely like him, nor will there ever be.

People called Ray a dreamer. To be sure, he was, but he was also an engineer. He had definitely seen the mountain, but he also dreamed in balance sheets, thermodynamics, and resource flow theory. He dreamed a world yet to come because dreams of a livable future are not coming from our politicians, bankers, and the media. For Ray, reimagining the world was a responsibility, something owed to our children’s children, a gift to a future that is begging for selflessness and vision.

Proverbs reminds us that though all good people die, goodness does not perish. The metaphorical spear in his chest was not an injury but an awakening that led Ray to give talks all over the world and in so doing he became a great teacher. He used business as a means to educate and transform, but his life was not about money or carpets. Ray’s life was about the sacred. His covenant was with God; the marketplace is where he labored. He gently laid down that spear this Monday morning but his teachings are a lineage that will live for centuries to come.

To we who remain, Ray’s passing is startling, a summons, maybe even a provocation. Before we die, may we know that to be alive is astounding, inconceivably precious, a privilege beyond reckoning. When we know and cherish this existence, the rest of our life is a shimmering field of light because we have come to recognize one unalterable truth—that we are one with all living entities and beings, and that we are never alone. The consciousness of interdependence and connectedness, and its attendant responsibility to do no harm, was Ray’s epiphany.

Seventeen years ago he had a realization. At that time, Ray came home. He rediscovered a sacred earth with all its complexity, beauty and mystery, free from the constraints of this or that ideology, free from narrow-minded thinking, and he was freed to reimagine the relationship between humanity and nature with Interface as the model. No longer were there human systems and ecosystems. They were one system and he understood that the laws of physics and biology prevailed. He believed in Emerson’s words, that there is an innate morality in the laws of nature: I have confidence in laws of morals as of botany. I have planted maize in my field every June for seventeen years and I never knew it to come up strychnine. My parsley, beet, turnip … acorn, are as sure. I believe that justice produces justice, and injustice. Ultimately, Ray’s work was not about making a sustainable business, it was about justice, ethics, and honoring creation. Zero waste was the path to 100% respect for living beings.

Like Ray, when we become literate in the sweet treasures of creation, there arises a sense of awe, wonder, and gratitude for one’s very existence and the swirl of living beings around us. Do you remember the videos of the Chilean miners coming out of the elevator shaft one-by-one from theSan Josemine inCopiapo,Chilelast October? The miners arose from a half a mile below the earth after being trapped for 69 days, and when they emerged they danced, they sang, they kissed the earth, they kissed their wives, kissed their mistresses—sometimes both—and they were ecstatic. They knew what they had nearly lost: the sun and the moon and the stars, cool air made sweet by plants and trees, the succulent foods that come from the soil, the sound of a child’s voice; they were rapturous and joyful and deeply grateful. Although it was a real event, theSan Joseminers are metaphors for being reborn in this life to what we overlook and take for granted. Ray woke up and saw what we will lose unless we change.

We don’t know exactly what happened to Ray in 1994. Yes, he read a book. But something remarkable was already there within his being that came to life. What we do know is that from that point seventeen years ago, Ray could see. He saw benevolence and beauty, the tightly knit longleaf pine forests, the undulant riverine corridors of theChattahoochee, the tantalizing pure light of life reflected on bracts and fronds, the drifting silvery spider silk that takes tiny passengers to new forests. Once your eyes open to the magnificence of creation, you cannot unsee.

Ray never looked back. He did not ponder long. He went to work. He was not satisfied by being able to see, he was destined to do one thing only, and that is serve life itself, for what else is there to do once you see how phenomenally we are stitched together by the living world?

He did not see nature as an abstraction to be worshiped but as the matrix of reformation, the source of goodness, the architecture of our spirit, the template of a future delineated by people who know that business has no purpose lest it serve and honor all of life, that our lives rely upon the kindness of strangers and the damp forest floor and spirited grasses and on you, his family, friends and fiercest admirers who loved this man. He loved us all.

His life is a testament to that love. He passed on Monday morning but it is up to us as to whether he will die. Actually, that is not even a question. He will live. His physical presence has vanished into a mystery we will all follow but never fully understand. His dream, his yearning for commerce that regenerates life and does no harm, his intention to re-conceive what it means to be a manufacturer, to bring industry and biology together into one entity, burned in him, a flame that never seared or ceased, and it will live on in his company and thousands more.

Ray has now traveled to a new forest. We who gather know that the greatest man of industrial ecology, the businessman who defined and showed us how commerce will be for centuries to come if we are to continue our life here on earth, was our friend, patron, and teacher, and we are the most blessed people in the world for having known him.

Paul Hawken is the author of Ecology of Commerce: A Declaration of Sustainability. Ray Anderson authored two books himself, Mid-Course Correction: Toward a Sustainable Enterprise: The Interface Model and Business Lessons from a Radical Industrialist. For more on Ray, visit Inspired by Ray Anderson, and Interface Inc. blog dedicated to remembering their chairman and founder.