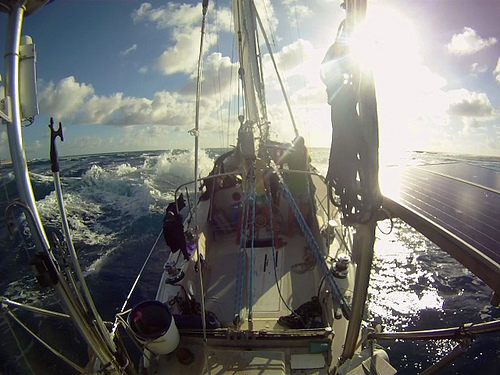 With a brief window of calm winds, Crystal and I readied Swell to move east among the atolls. With the news of Barry’s passing, I wanted to check out what was rumored to be a new boatyard on an obscure strip of coral a few atolls east, plus with a swell on the way, we might arrive just in time to catch a few juicier waves before Crystal flew home.

Editor’s note: Before leaving for Chile, Crystal Thornburg-Homcy visited the South Pacific and fellow Patagonia ambassador Liz Clark who’s sailing around the world in her boat, Swell. Here are a few stories from their time together.

Swell caught the flow of the outgoing tidal current as we steered around the coral embankment and into the open draw of the pass. The sun pierced the cloudless morning air, illuminating the deep blue river that carried us out to sea.

Through the binoculars, I could see the sea churning up ahead. “Oh, no…” I bellowed. I knew what we were in for: standing waves and sea-rapids where the flow of the tidal river met the ocean. It was too late to turn around, the outward flow was too strong to fight…I made a firm mental note to get some better tide information!

Swell’s stern began to slide right and left as we entered the 300-yard stretch of turbulent water. The waves grew taller and closer together and mixed with swell undulations. I spun the wheel maniacally, but Swell lifted and crashed and spun about helplessly. Despite the bucking, dipping, and twisting, I managed to keep her bow mostly pointed into the seas. Crystal remained completely calm, and her certainty was assuring, although my palms were sweating like faucets and I must have had eyes as round as a fish’s. Swell did one final skid-out to starboard, and I revved the engine and cut right into stable water as the atoll finally spit us out. Just then a dolphin leapt off the port bow.

“Yay! Goodbyyeeeeeeeeeeeee!!” I called to him, a tone of fear still lingering in my voice.

With a few deep breaths, I realized we’d run the rapid. All was well and we pointed the bow east, running along the atoll’s northern rim.

We set the sails for a lovely close reach in the 8 or so knots of wind, let out the fishing lines, and breathed in the joy and excitement of our next adventure.

Little did we know, more excitement was quickly on the way… 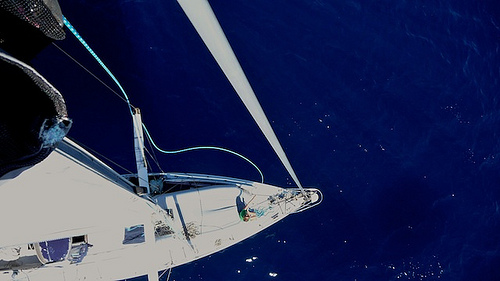 We’d both hardly taken a breath upon setting the sails, when…POP!!!!

The headsail let go at the mast head and tumbled down into the sea?!!

I scrambled to the bow, followed by Crystal, and we heaved the wet mess aboard. Swell proceeded to drift quietly in the light wind, while Crystal and I stood there holding the sail, rather dazed…

Upon inspection, it was clear that the threads of the strapping that held up the top of the sail had simply given out, probably thanks to a year and a half in the tropical sun…The sail itself was on its last leg anyway—the non-Dacron material delaminating in all the high-wear areas. I had a few smaller sails we could put up, but the problem was that when the sail fell, it left the halyard swivel for the roller furler at the top of the mast. This meant one thing: someone had to go up and get it.

Being so close to the pass, and thus the calm interior of the lagoon, I didn’t think twice. “We have to turn back,” I told Crystal sadly. “I have to go up the mast and we’re better off to go back and get resituated and then restart again tomorrow…but we’ll have to wait until the tide changes to get back in.”

I turned Swell around and we drifted slowly back in the direction of the pass. I sat down on the deck to think…”This weather won’t last long. If we wait another day, we might not be able to go at all. I know Crystal is looking forward to seeing another island, and the swell that is on the way will touch there, but not here…”

As the minutes passed, I realized how relatively calm it was with the main up and shadowed from swell in our proximity to the atoll. Confidence spouted up from my intuition.

“Do what?” Crystal replied.

“Go up the mast.” I affirmed. “I’ve never done it at sea, but these are about the calmest conditions I can imagine. That way we can put up another sail, and continue on our way…”

After some re-assuring, Crystal liked the plan, so we dug the bosun’s chair out of the lazerette and set it up for my trip to higher elevations.

“Crick, criiiiiiiiick, criiiiiiick…” We worked together, Crystal pulling on the falls line and me easing the weight with my arms and legs as I monkeyed up the mast. Suddenly I looked around at my bird’s eye view, the sea was a sheet of royal satin and the palm-lined coral stretched both east and west as far as I could see. Lovely, but I didn’t spend much time pontificating as my hands trembled and body clung to the mast. The roll of the swell that was felt down on deck had to be quadrupled up there. I worked quickly and with adrenaline-enhanced precision as nausea crept up my core. One last glance at what my feathered friends see, and I was on my way down with the halyard swivel…

Crystal steadied me the last few feet and soon I was back on deck—sea-sick, sweaty, but thrilled that it was successfully over. I dug out the sail that my brother had brought down a year earlier, and we pointed Swell into the wind, and hauled it up the furler track.

Two solid hours later, we were spent, thirsty, and sun-burned, but the simple joy of forward motion towards our destination was enough to keep us smiling. 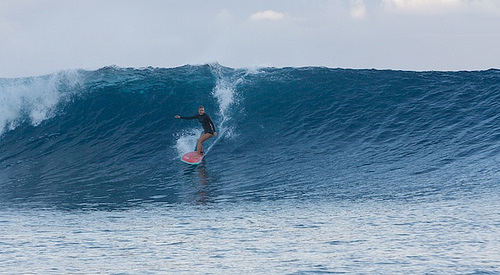 After rising to our great challenge, the sea rewarded us with smooth sailing through the afternoon until the wind dropped off entirely and we motored on into the calmest, starriest night I could ever remember in this wind-worn belt of the Pacific.

Rotating on 3-hour watches, I relieved Crystal just after 3 am. Swell plowed on into the moonless galaxy of twinkling starlight and bubbling phosphorescence. I felt Barry there with me…He surely wouldn’t have missed out on a night so spectacular…Oh the shooting stars!

At 5:02 am, Venus, the morning star, rose out of the sea. Light followed her. I woke Crystal, but couldn’t resist watching the sunrise before I laid down to rest. We turned off the motor and let Swell drift in the succulent silence. We curled up against the wad of broken sail, tucked under our blankets, and dissolved into the Peace…the ubiquitous, all-encompassing Peace…that was floating on that miraculously calm, open sea…

As we entered the deep, easy entrance to the next atoll destination a few hours later, our timing appeared flawless. The sea surface began to wrinkle as the trades gusted from the east, and the swell was most certainly filling in! We watched it move north along the atoll’s coral rim where it peeled off along the shallows of a long, flat lay of reef…thus, Crystal’s last 36 hours became a salty blur. We wondered where and when we’d meet again as she stepped up into the tiny prop plane, leaving me there with more waves than I knew what to do with! 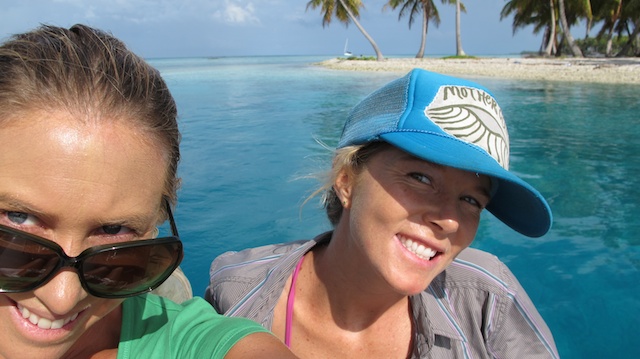