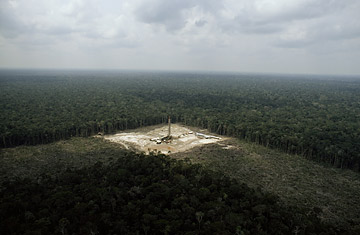 Patagonia employee Sherry Chow joined Global Exchange last year for an eye-opening trip to Ecuador. Her trip report follows and begs this question: if the president of a struggling South American country has the courage to seek out alternatives to the lucrative promises of the oil industry, what's stopping stronger nations from assisting or following suit. It's a powerful reminder that one doesn't have to be a world power to set a powerful example.

Both are within a zona de amortiguamiento (ZA), or buffer zone, which form a boundary between protected areas and the surrounding environment.

Background: Scientists including Jane Goodall and E.O. Wilson have called the Yasuni Reserve, "one of the most biodiverse places in the world." In 1989 UNESCO named the park a World Biosphere Reserve, to ensure preservation of the area.  A total of 644 trees have been found in one hectare of the park, almost the total number of species found in all of North America (~680). Though comprising only a small percentage of all forest lands within the Amazon Basin, Yasuni holds the greatest diversity of orchids and birds, and includes 40% of all mammals found in the Amazon. Yasuni also consists of one of the larger contiguous tracts of rainforest left in the Amazon; unlike the eastern Amazon, the western Amazon is still mainly free of roads, and thus, its ecosystem has largely remained intact. 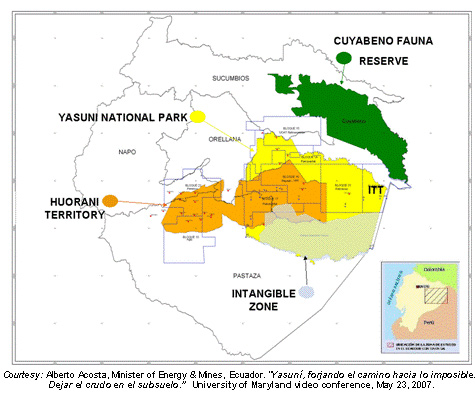 ITT Proposal: In April 2007, as a solution to protect the reserve and the indigenous territories, President Rafael Correa made a bold proposal by calling upon the international community to monetarily support keeping untapped the ITT (Ishpingo-Tiputini-Tambococha) block, the largest oil reserve underneath Yasuni National Park. The goal is an international response of $350 million per year — an amount roughly equal to 50% of the annual revenue that would have come from oil within the ITT area — for ten years. This is a bold and risky proposal indeed, as oil is Ecuador's main export and source of revenue. So far Norway and Germany have responded favorably, Norway proposing to give 250 million crowns (~$10 million). Response from the United States is not known, while it is probably the main consumer of Ecuador's oil.

Lacking sufficient international response to this proposal by the end of 2008, President Correa was brought one step closer to opening up the ITT block and negotiating how best to regulate oil extraction with minimal damage to the delicate ecosystems Yasuni protects. As the deadline approached, the reserve received a fortunate stay via a deadline extension through June of 2009. While there is still time to speak out on behalf of Yasuni, that time is quickly running out.

There has been talk about no-roads oil exploration using helicopters, as the building of roads is a main destructive force, but having seen first-hand the damage Texaco caused in another part of Ecuador, it seems any activity involving oil extraction would irreparably change and damage the entire area; for Yasuni, this would destroy not only the natural ecosystems, but also displace indigenous groups from their ancestral lands.

What you can do: Visit the following websites to make a donation, or learn about more ways to help:   www.sosyasuni.org/en/ and www.saveamericasforests.org/Yasuni/

The following articles also provide great background information:
Time Magazine (Aug 18, 2008), and this piece from August 13, 2008, a thorough review of the region, to which Time refers in its article.

[Above: A large clearing filled with a standing pool of crude oil and a waterway covered with a sickening oily slime were not difficult to come by during a recent trip to Ecuador. Photos: Sherry Chow]