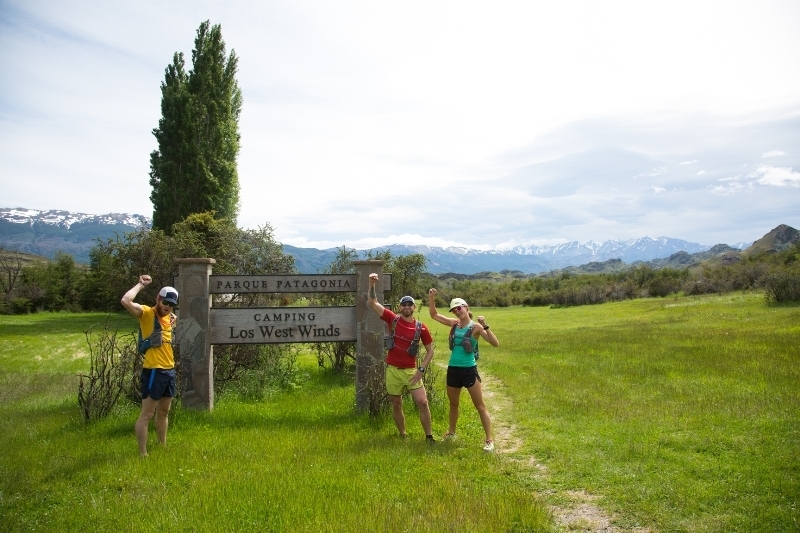 The wind gusts, blowing spray from the water lapping on the banks of Lago General Carrera. Here I stand, eyes closed, feeling the cool mist on my sunburnt cheeks. When I open my eyes it’s still there, it feels like a dream, but it’s not—Patagonia spreads out all around me. I’ve long dreamt of seeing this place and now it’s blowing my mind. After imagining over and over what it would be like, how it would smell, how it would feel, it is far more than I had imagined it would be. The previous 39 hours have been a blur of driving, airports, flying, airports, loading gear, and more driving. But now it’s quiet, except the sound of the wind blowing across the lake.

A little over four years ago, I finished a very challenging run through the heart of the Frank Church Wilderness area along the Middle Fork of the Salmon River. Ty Draney and I teamed up with Save Our Salmon to use a ridiculously long run to draw attention to that organization’s work to restore historic salmon runs. Despite our over-confidence and under-planning the run was a success—many people learned of the work being done through the story of our 154-mile journey.

Not long after, I met Montana Johnson. She was representing Rios Libres at the Outdoor Retailer Trade show. We had a brief discussion about the group and what they were doing to stop a major, multi-dam project on the Rio Baker in Patagonia and I shared a little about the run with Save Our Salmon. We immediately began brainstorming about how we could do a similar project together and use running as a way to share the Rio Baker story with more people. James Q Martin, co-founder of Rios Libres, quickly jumped on board and we set to work planning and developing an idea of what we could do together.

Like a long run, projects like this encounter a lot of twists and turns and you have to adapt to the changing terrain. We determined a route and a plan of what we would run—170 miles along the Rio Baker from source to ocean— but simultaneously the dam project started to lose momentum. The Chilean public successfully rallied against the dams, ultimately leading to the government canceling the permits in the summer of 2014. So, at least for now, the Rio Baker is safe and the original idea is on hold, but the seed was planted. 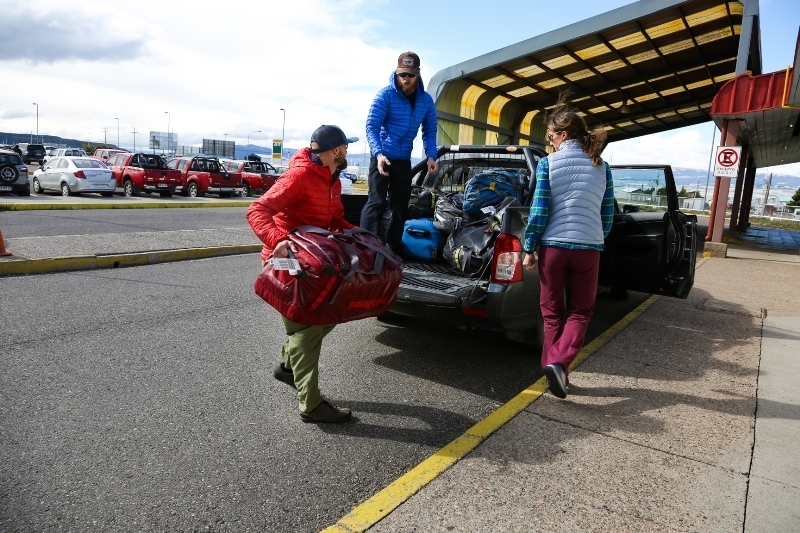 Jeff, Luke and Krissy loading bags into the truck at the airport in Balmaceda. Photo: James Q Martin 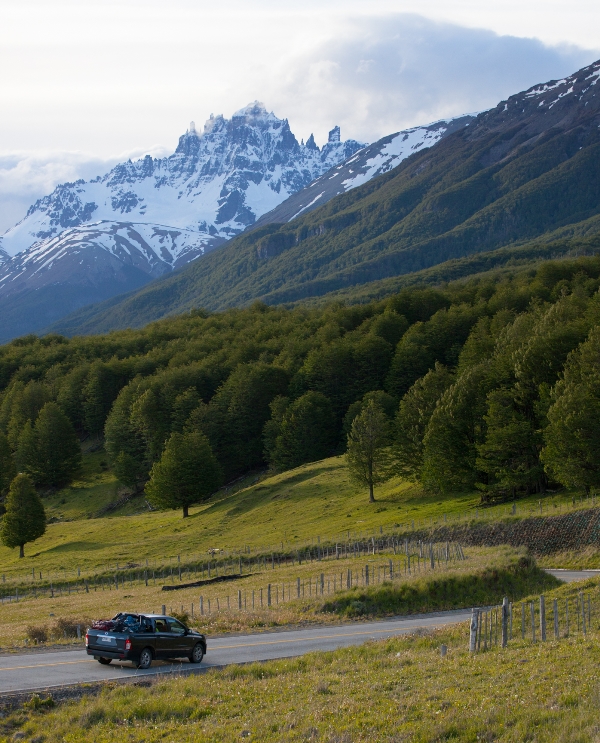 En route to Valle Chacabuco with the jagged peaks of Cerro Castillo in the background. Photo: James Q Martin 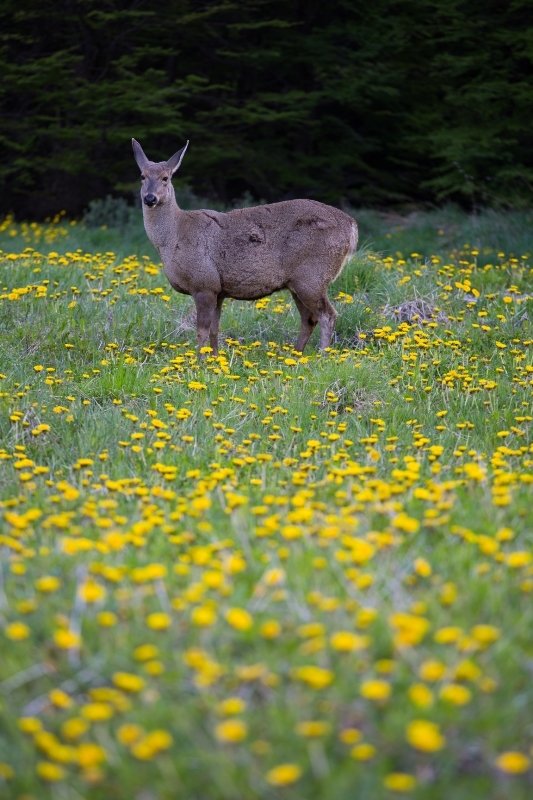 It is hard to come by the endangered huemul deer, but we were lucky enough to see one on our first day out. Photo: James Q Martin

The area around the Rio Baker is ecologically significant in terms of habitat and wildlife, and is faced with many challenges. In 2004, a large ranch, Estancia Valle Chacabuco, came up for sale on the edge of the Rio Baker. Doug and Kris Tompkins recognized the need to protect the property and in 2004 Kris’ foundation, Conservacion Patagonica, was able to purchase 174,000 acres for permanent protection as Patagonia Park. However, there was a lot of restoration work to be done because the land had been severely degraded by 80 years of overgrazing, largely by sheep. When I learned that Patagonia the company allowed employees to have paid leave to get boots on-the-ground to help restoration efforts, I immediately fell in love with the idea of re-wilding such a beautiful place.

The Patagonia Park property sits directly between two large nature reserves—the Jeinemeni and Tamango. It forms a bridge between the two reserves, and upon donation all three will join together to create the future Patagonia National Park, a 640,000-acre protected area that’s critical habitat for the endangered huemul deer. We determined a long expedition run could bring important attention and support to this project. Traveling on foot will allow us to connect to the land and help us understand the commitment that is required to protect an area this vast. 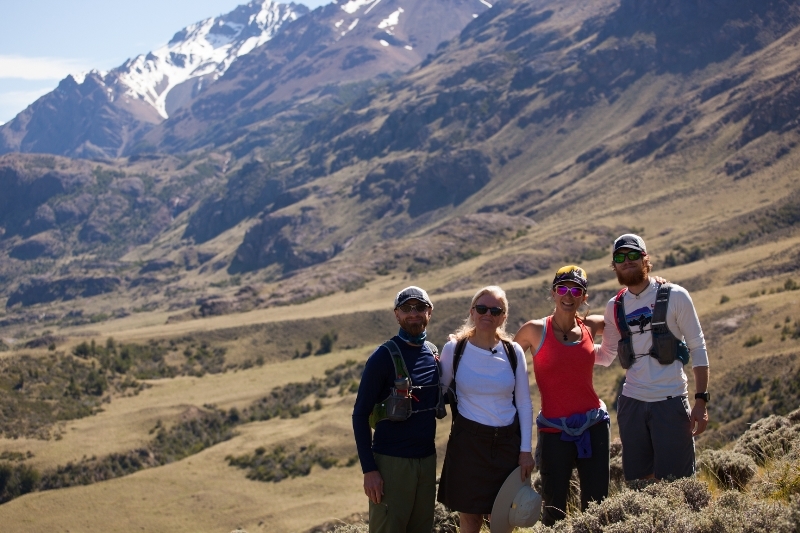 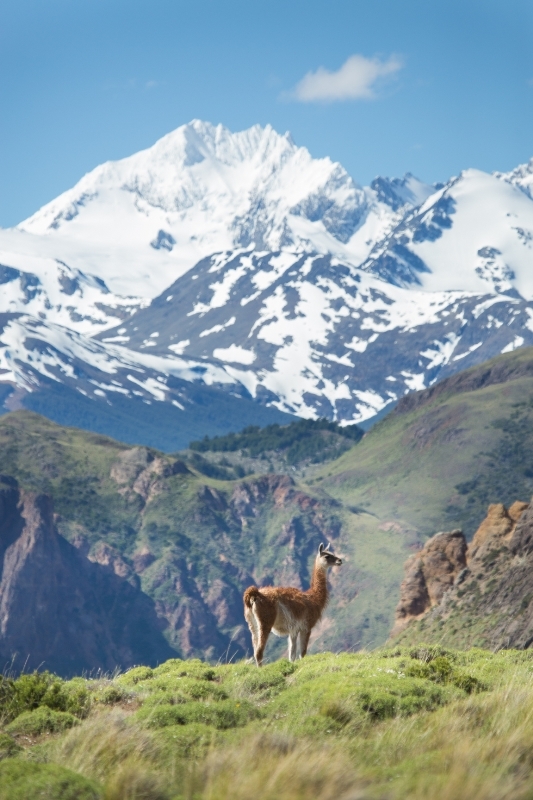 Guanaco populations have increased since the removal of the sheep. Now they are everywhere in the valley. Photo: James Q Martin 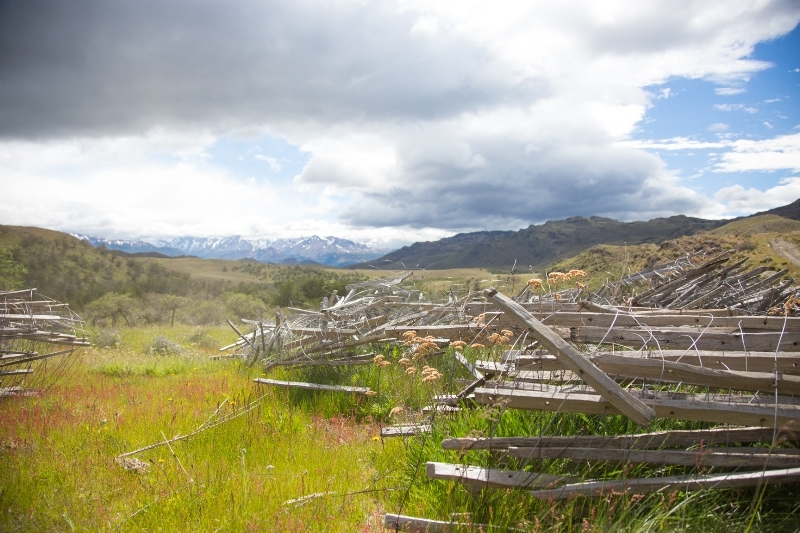 A major part of the work that Conservacion Patagonica has done is removing old fences on the land to facilitate animal migration. These piles will be recylced and reused as needed. Photo: James Q Martin

Our plan, at this point, is a little audacious. Jeff Browning, Krissy Moehl and I are going to start running from Chile Chico, a small town that sits on the far northern side of the Jeinemeni National Reserve. From Chile Chico we will run the dirt road into Jeinemeni National Reserve, cross it via the Valle Hermoso and then head into Patagonia Park along the Valle Avilés. We’ll continue to run through the middle of the park and eventually past the park headquarters. We will then ascend up and over Cerro Tamanguito into Tamango National Reserve. The shores of Lago Cochrane will guide our final steps before finishing in the town of Cochrane. Our traverse will tie the three distinct ecosystems of Jeinemeni, Patagonia Park and Tamango together just like Kris and Doug envisioned when they bought Estancia Valle Chacabuco ten year ago. The route will total roughly 100 miles and will take us through the heart of this wild place. We’re uncertain of whether the route can be done in the fashion we have planned. In the future, a large portion of what we will run will be one of the crown-jewel backpacking trails of the park.

We have been in the park for a few days now working on logistics, scouting parts of the route, and learning as much as we can about this amazing place. We are deep in the final preparations for the run—hearing the sounds of food being dropped into packs, zippers opening and closing, and clothes and equipment getting packed and repacked means we’re close to determining the essentials. 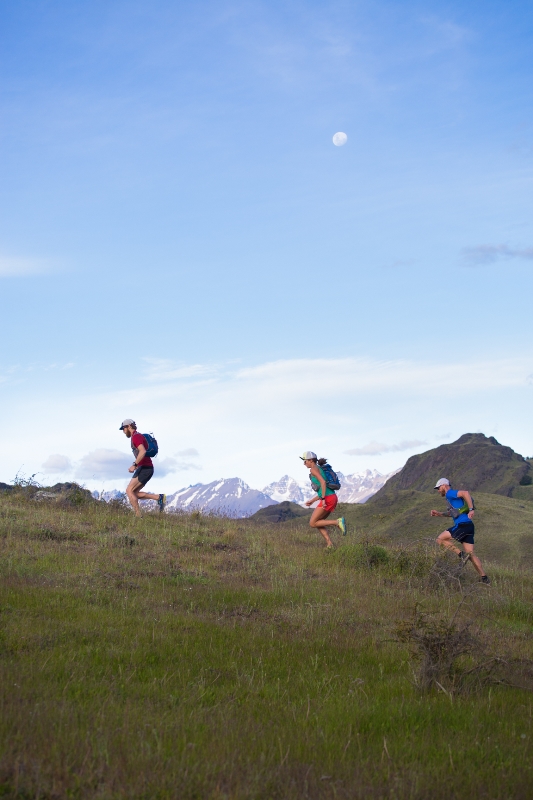 Luke, Krissy and Jeff get some training in for the 100-mile run. Photos: James Q Martin 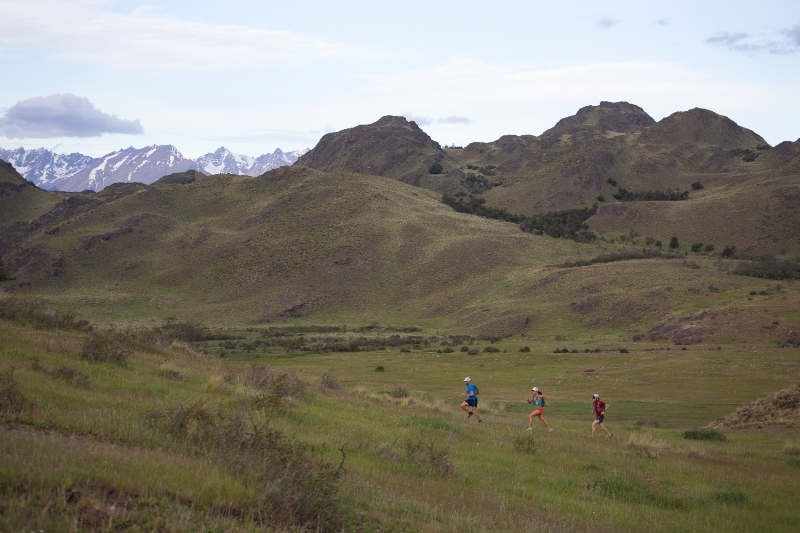 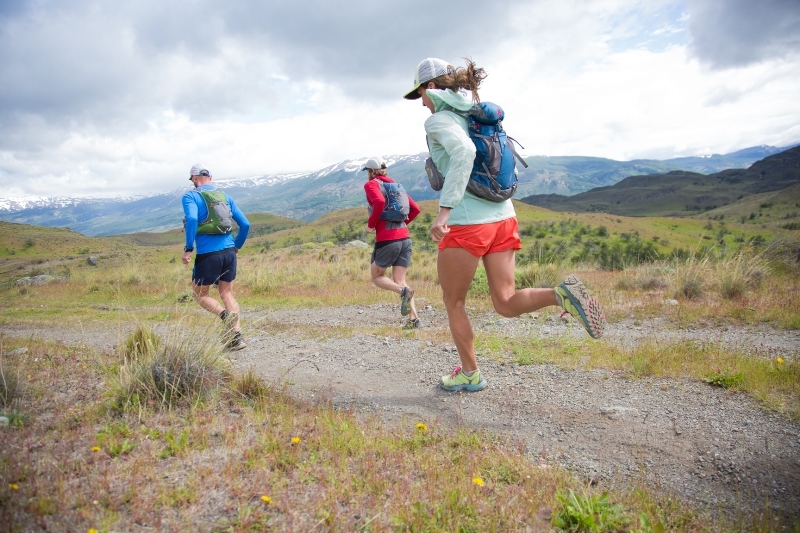 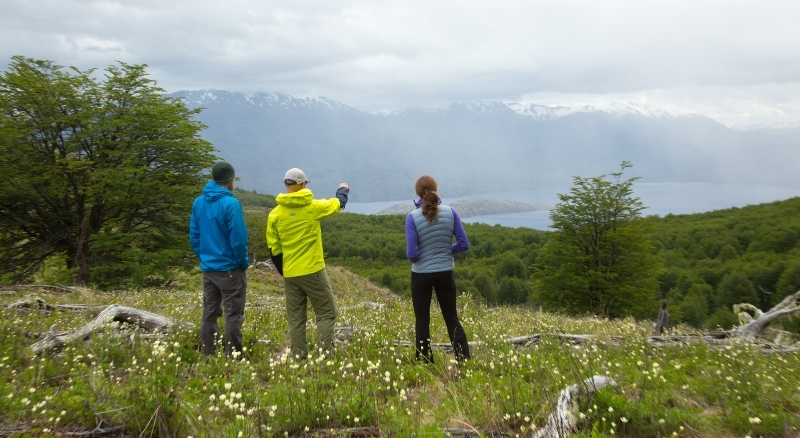 The wind brings me back to the moment. Our challenge lies ahead, but at times seems minor in comparison to the conservation project as a whole. The confluence of amazing people has been very enlightening, which has led to lots of thought and meditation. What does it mean to protect a place like this? How important is it that we take action? Can this undertaking be accomplished? I am certain the answers will be found during our pilgrimage through the park. 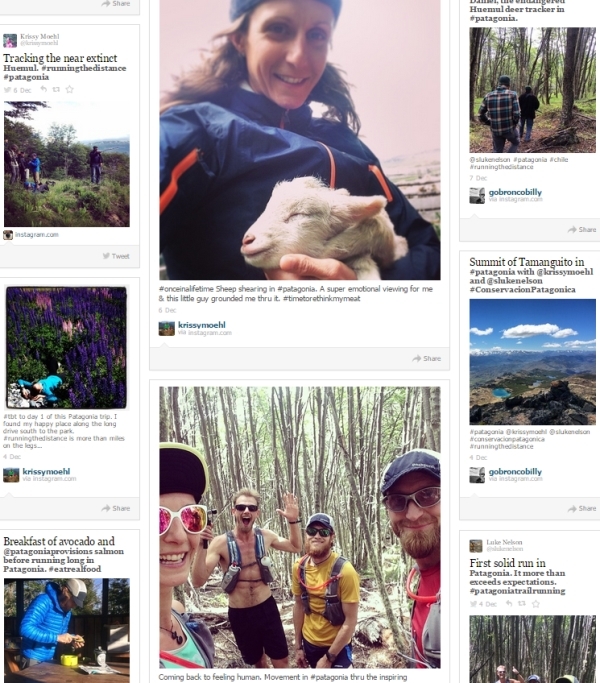 Keep up with Luke, Jeff and Krissy on their journey by visiting the Mile for Mile trip page on Patagonia.com or by following #RunningTheDistance on Instagram.

If you’re interested in helping with the ongoing creation of Patagonia Park, physically or financially, learn how at Conservacion Patagonica and Parque Patagonia.

Ready to come see it for yourself? Start planning your visit to Patagonia Park here.

Luke spent his childhood wandering the mountains. These days his time in the wild is spent running. Not wanting to be confined by the rules of racing, he prefers meandering lesser-known routes and rowdy mountain linkups as a way to stay connected to nature. Being connected with the outdoors on a daily basis has inspired him to be an activist and to speak up for the planet. He strives to maximize each hour by balancing his time as an activist, physician assistant, race director, husband and father.