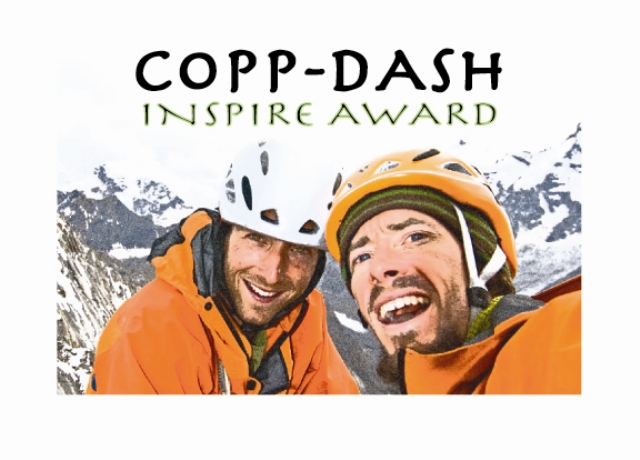 The Copp-Dash Inspire Award, sponsored by Black Diamond Equipment, La Sportiva, Mountain Hardwear and Patagonia, announced the latest winners of the new climbing grant established in memory of American climbers Jonny Copp and Micah Dash, who were killed in an avalanche in China in May 2009 along with filmmaker Wade Johnson. In addition to providing financial support to perspective expedition teams, the goal of the Copp-Dash Inspire Award is to provide mentoring before and after the expedition to help the climbers bring back inspiring multimedia stories of their adventures.

“It was great to see so many Inspire Award applicants this year,” says La Sportiva’s Marketing Manager, Laura Fryer. “The Copp-Dash Inspire Award will help support small teams document their ascents of the great mountains of the world. Jonny, Micah and Wade knew that the stories and experiences we take away from a climb are just as important as the climb itself, and that’s what the Inspire Award is all about.”

This November, the winners of the 2010 Inspire Award will be highlighted at the annual Adventure Film Festival in Boulder, Colo. The event serves as an international forum for the best and most inspiring independent outdoor and adventure films and will showcase the creative work that comes out of the Inspire Award expeditions.

The 2011 Copp-Dash Inspire Award winners and their objectives are:

• Dave Burdick with Dylan Johnson and John Freih. A new, completely independent rock and mixed line on the 1100m South Face of Mt. Burkett, Stikine Icecap, Southeast Alaska.
• Jesse Spaulding with Kyle Kneely, Scott Parker and Conrad Piper-Ruth. New routes, up to 6000m, in the Nangma Valley, Northern Pakistan.
• Kyle Dempster with Jewell Lund and Kelly Cordes. First ascents in the Karavshin Valley in southwestern Krgyzstan. Intermission bike ride from Bishkek, Kyrgyzstan to Skardu, Pakistan (approximately 1400 miles). First ascents of the Southwest Pillar of K7 West, to its unclimbed summit and the east face of K7 Main, in the Charakusa Valley, Pakistan, Karakoram Mountains.
• Matt McCormick with Pat Goodman and Will Meinen. First ascents of the Southwest Pillar of K7 West and an alpine-style first ascent of a major sub-summit of K7 West, Nepal.
• Mike Libecki. Solo attempt for the first ascent of The Ibex Horn, central Afghanistan.
For more information on how to apply for the Copp-Dash Inspire Award for 2012, visit the American Alpine Club's website.