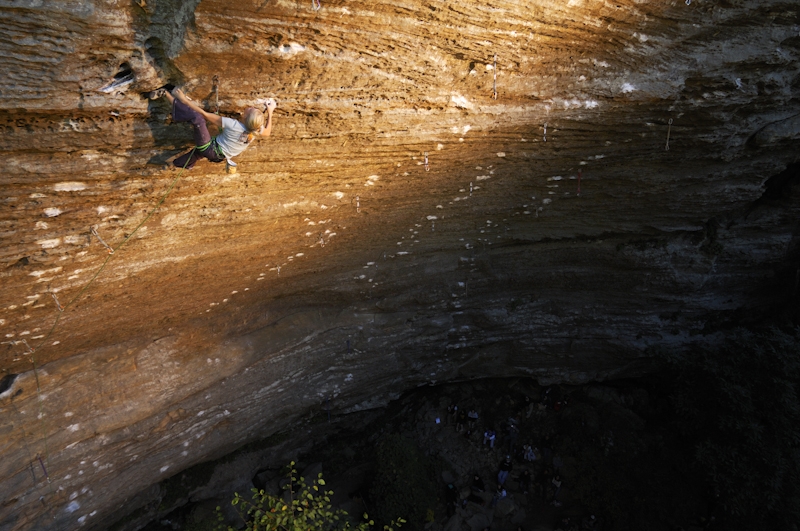 I hung limp on the end of the rope with my forehead resting on the taut line. I felt my throat tighten. I hadn’t been this frustrated in a very long time.

I realized a long time ago that grades were relative, but it seemed everyone here, 30-40 people, including a seven year old homeschooled girl, could climb the severely steep 5.12s that I was just about ready to shamefully accrue yet another DNS (did not summit) on.

I pulled back on, twisted up to a small, sharp pocket, stuffed in two fingers, and then lurched up to a heavily chalked flat edge, which was not nearly as large as my belayer (who was currently engrossed in an all-important dialog with another belayer about learning to play the guitar) previously made it look. I held it (and my breath) with a death grip. Gravity eventually won and I fell until the loop of slack hit the GriGri and my belayer was jarred out of her stimulating conversation.

I was flummoxed. I wasn’t so pumped as much as unable to figure out what position to deform my carcass into to stay on the wall. My usual go to, footwork, was useless. I had no choice but to let go. I fell until the loop of slack hit the Gri Gri and my belayer was jarred out of her stimulating conversation.

“Lower me” I said with tight lips, trying to control my temper. I looked up and mentally recited a Chinese adage, “Control your emotion or it will control you.” But what I was more realistically thinking was, “suck up sucking.”

As I stood panting and struggling to untie my knot thirty feet out from the wall (damn, it was so steep!) a sweet and sensitive twenty something college kid offered, “There are some really great trad climbs here!”

Oh god, this was bad.

My frustration didn’t last long, however. I was in the Red River Gorge! Best sport climbing in America! Home of Miguel’s! Hell yeah!

Miguel’s is the Camp Four of the South. Personally, I believe that one of the main reasons why the Red River Gorge has become so prolific is because of Miguel’s. He and his family have supported climbers since the very git-go. They provide a true dirt bag bivy environment. It is cheap, there are no maximum limits on stays and no hassle from the fuzz; a little sovereign state of dirtbags. They also feed their citizens with affordable, high quality food. Miguel’s, plus miles of stunning sandstone cliff bands, equals world class climbing. And what’s to complain about that? 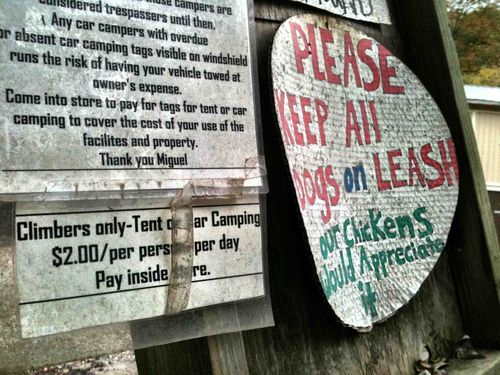 Reverse discrimination and I like it. All photos: B.A.G. 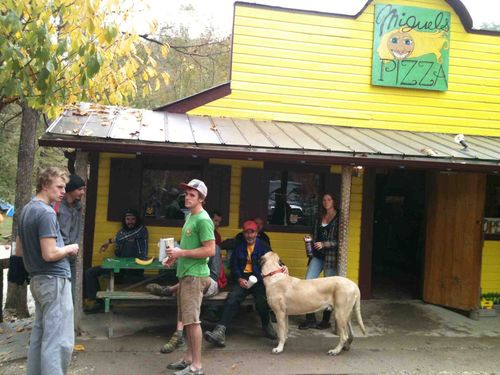 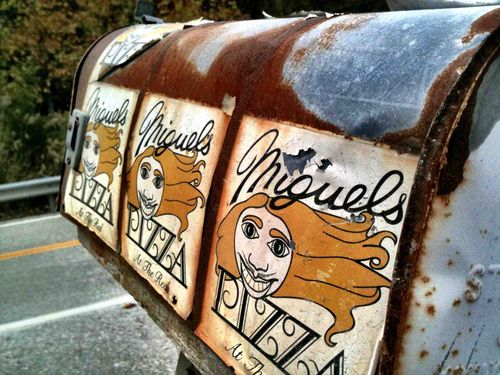 My climbing crew for the day was: Kris Doc (one of the many SLC Super Moms that can crush your project and your soul while exchanging potty training tips with other on-scene moms) , Brad (aka. Be Rad, temporarily unleashed from his desk at Black Diamond and inflicted with a severe case of the Over Stokers), and Whitney (aka. The Barnacle, who seemed to have been born from the womb of the Motherlode itself and nursed on Motherlode Mother’s Milk. As her nickname implies, she can hang on forever).

Back at the crag, I decided to turn the 5.12 dial down a couple notches from 12d to 12b and tied in at the base of the “kiddie pool” section of the wall. A guy with double daisy chains threaded between his legs suggested I stick clip the first bolt. I looked at him like he had kicked a puppy. I don’t stick clip. Luckily, my pride was already compromised and I heeded his warning. Which was fortunate, since I melted off the pinches just below the first bolt and swooshed onto the rope, ten feet above a back- breaking boulder. The clicking of Whitney’s camera was laughable. I felt like I was a sophomore on spring break attempting their first 5.12. I scraped my way to the top of the pitch, but only because I found three hand jams (triumphantly squealing, “HAND JAM!” each time)

It was now 6pm, I was beyond cooked and I was hoping we could leave and go get some of that famous Miguel’s pizza. But much to my dismay, my friends were still keen on sending more 5.12s. What was wrong with these people?! I had lost count of the number of pitches they had dispatched.

I surreptitiously eyed the emergency red, white, and blue can of 3.2 water I had stashed in my pack in preparation for just this occasion. I reached for it, overcame the urge, and instead grabbed 12 quick draws and my climbing shoes, dragged a reluctant Kris away from the 5.12 playground and headed out to find some long-lost forgotten land of 5.11s. 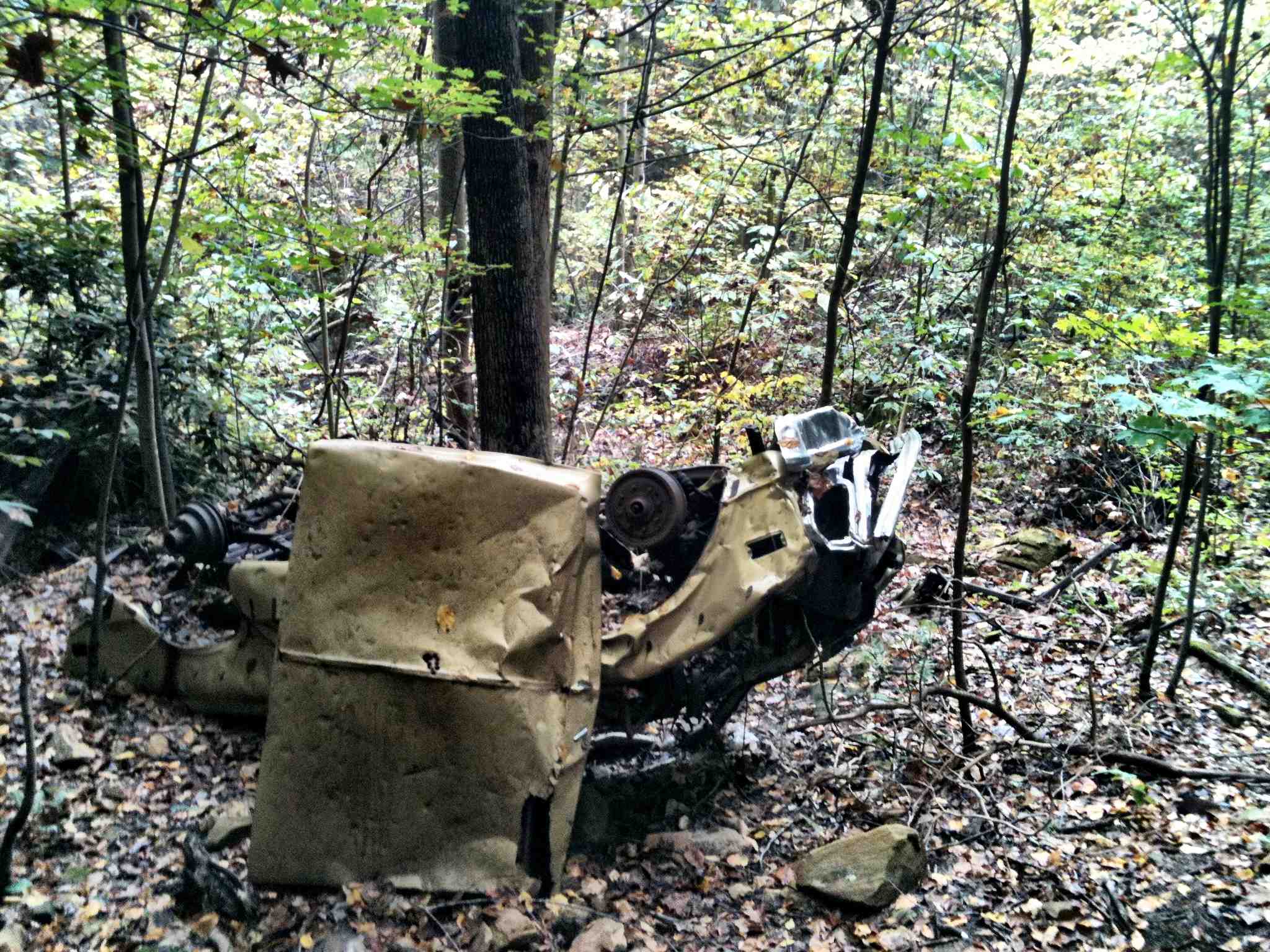 After about five minutes of hiking in flip-flops, and past a cool car, we came upon a 60-foot tall wall with two side-by-side routes. Quick draws hung from most of the bolts. I couldn’t find them in the guide book so I took a picture and texted it to Whitney, “What are these?”

They didn’t look that bad, and certainly weren’t as steep as the Motherlode beasts, so I told Kris I was going to try one.

“But we don’t know what they are!” She shrieked, incredulous that I would even think of doing something not in the guidebook.

“You are the bravest climber I know!” She cheered as I successfully lowered from the anchors of the climb. Aw shucks, I almost believed her.

I half expected her not to want to do it, but asked anyway. She enthusiastically replied, “You inspired me! I’ve got to try now!” and she tied in and started climbing. Before clipping the first bolt, she reached for a dubious-looking flake.

“Don’t touch that.” I sagely warned.

“This is the scariest thing I’ve ever done!!!” She wailed.

Hmm? Fixed quick draws spaced six feet apart on rock that hardly qualified as choss (the foot holds crackled, but didn’t break) in a First World country where were a 911-call away from a clean hospital?

Half way up the climb, she yelled down, “Oh my god I can’t believe I’m having an adventure in the Red River Gorge!” Kris was giddy with the experience.

One person’s adventure is another person’s redemption.