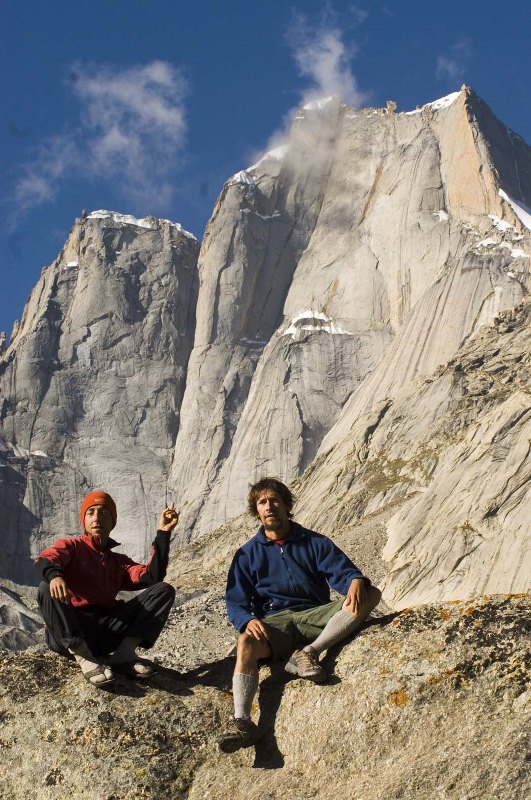 Full details of the trip have been scarce since their return, but Jonathan — a Patagonia field report author, featured photographer and all-around climbing badass – recently sent us a brief recap of the team's time in India. Huge thanks to Jonathan for sharing these nuggets with The Cleanest Line.

[Micah Dash and Jonathan Copp at the base of Shafat Fortress, Kashmir, India. Photo courtesy of Jonathan Copp]

Micah Dash and I just returned from Kashmir where we made the first ascent of a walled mountain called the Shaffat Fortress. The journey, climb and surprises along the way (like finding ancient ceramic pots, snow leopard prints in fresh mud and visiting with monks in a remote Buddhist monastery) combined to make this trip quite memorable.

I just want to send you a few bullet points (pun intended – we were a stone's throw from the Line of Control, on the Indian side of the Pakistan-Indo disputed territory) from this adventure…

Bullets (are a man's best friend, if you are a Punjabi officer stationed in Srinigar, Kashmir ):

Delhi - violence is unheard of, but theft and corruption is just business. One bag is stolen, leaving us with only two ropes. Five weeks later the bag would miraculously appear after I mention the Delhi police investigation (which was never organized).

Leh - our second stop. We are invited in to be part of the family of Akbar, one of the town's most respected Muslim fathers. Here Hindus, Muslims and Buddhists worked together and even married.

Kargil - only a day's drive from Leh, but into the dark ages. Heavy military presence. 90% Shiia Muslim. No women seen.

River Swim - the long, rugged dirt road takes us into the heart of the Zanskar Mountains, and we see our mountain. But the surging Suru River needs to be crossed. I swim it with a rope around my waist, the glacial cold slowing my stroke by the end. The river sweeps me almost 200 feet down-stream before I hit the other side. Then Micah and I build a tyrolean-traverse further downstream in giant boulders.

Italians - they show up eight days after us like an army in uniform: seven team members in matching jackets, sponsor flags flying, hundreds of pounds of equipment and thousands of feet of ropes for fixing. They tell their guide to tell us we will go to jail if we climb this mountain without a permit. We pack our bags and start up the crumbling, glacial moraine four hours later.

The Climb, day 1 - The bergschrund is easy. Then good rock corners and cracks. Then scary ice and mixed halfway up the mountain to take us to the heinous bivi just after dark.

Heinous Bivi - like sitting on a camel's back made of ice all night. We traded off the one sleeping bag throughout the hours 'til morn. The next day storms/snows, and we make two pitches to a better ledge.

The Shaft - On day 3 it is Micah's block and he starts us up the Shaft, a feature of concern. He is 150 feet above me when he lets out a scream of true terror. His hands and feet were frozen by melt-water and he was 25 feet run-out in a rotten offwidth crack. The rope-length takes three hours. (Q: Can you grade pitches like that?)

The Colorado Route – Long story short: a bit of hypothermia; lots more climbing including a few tough mixed ice sections (like the half rock-shoe, half tools-and-crampons pitch); and a 'splitter' summit day, August 11th, when we could see peaks in China, India and Pakistan from the top — 21 pitches (VI, 5.11, M6, A1), around 1,100 meters of climbing topping out between 19,000 and 20,000 feet.

The Italians wouldn't look at us when we came down. But while on the wall Micah and I had vowed to make friends with them, eat some of their imported cheese and wear their expedition shirts home. So we did. And we partied, drinking bad rum we'd found in Rangdom.

The Snow Leopard, Ibex, ancient pots, hitchhiking with the Indian Army, bouldering, hanging out with Gompa monks, et cetera was all collateral fun. But we are happy to be back in one piece.

I hope to see you soon.

Jonathan Copp is also the founder of the annual Boulder Adventure Film Festival and Dirt Days. Those in the Boulder area know the festival well and look forward to it every year (Patagonia ambassador Timmy O'Neill hosted the auction this year). If you don't live in the area, consider bringing the BAFF to your home town through their Festival World Tour. Details are available on the Festival World Tour page; contact Mark if you're interested.