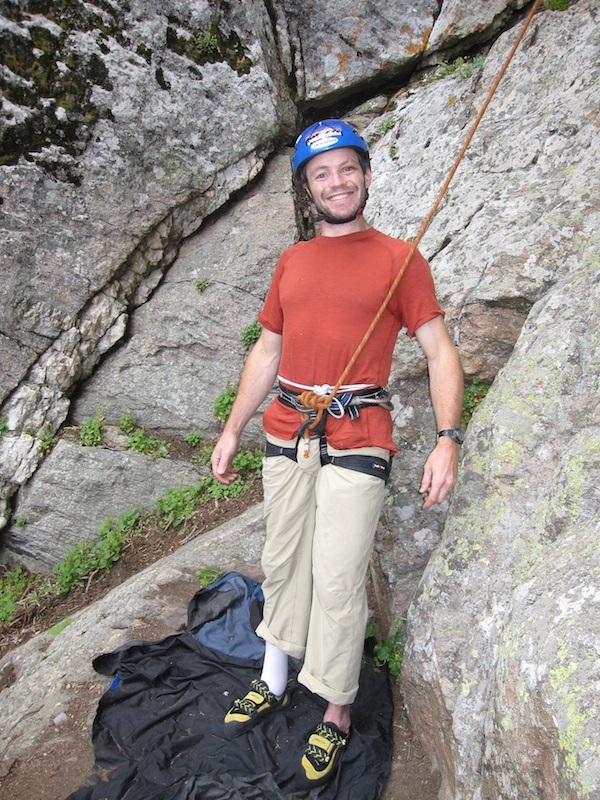 [Ed Note: Kelly lets us write the title, so of course we're going to take a chance to tease him. And it goes without saying, but we'll say it anyways for all those bone-heads out there who are too-cool for school: there's nothing yella-bellied about protecting your skull. Wearing a helmet is more than a fine idea, it should be regular practice.Yes, people wearing climbing helmets can still get their pictures into catalogs and magazines. So don't be too cool for your own good, or you might end up looking like this guy.]

Who says you can’t reinvent yourself? Just because I used to be known as “Sketchy Kelly,” and just because I recently made the safest form of climbing as dangerous as possible, when I flipped upside down on an overhanging sport climb and used my head and face as a battering ram, that doesn’t mean I can’t become “Safety Kelly.” Never mind the black eye with a scar above, the five-inch scab on my scalp, sliced finger, surgical scar in my spine plus four more in my leg, and the tequila-induced banter about Disaster Style. Appearances can be misleading.

After my faceplant, Tommy had left me a funny phone message, reminding me that I’m definitely bad at falling, and we need to have some “falling classes.” Sounded good to me. Obviously I need it. So soon after, Tommy, my friend Craig and I returned to the crag. On the approach I tried to explain to how it happened, and Tommy did the same as a couple of other friends who sport climb a bunch: He got this confused look, said he didn’t really understand, shook his head, and said there’s no way that could ever happen again. Still, scaredy Safety Kelly now wears his helmet every time, even sport climbing, even on top rope. (At least for now.) A little overboard, sure, but maybe it’ll help balance things out. Hell, the way I’ve been going, maybe I should wear it walking to the mailbox, to the grocery store, to the liquor store (not a bad idea)…. Safety Kelly, baby.

We unpacked our packs and warmed-up. I led a moderate slab first, then we pulled the rope and Craig re-led. Tommy waited patiently, declining a lap. Fair enough, much in the way I probably wouldn’t bother warming-up on 5.4. He’d probably warm-up on the .12a in the wickedly overhung alcove area.

Now this is just ridiculous in my world. Who the hell warms-up on .13a? (Lots of people, I guess, from pre-teens these days to the kid serving your coffee down in Boulder, to Tommy and his ilk – but some of us live in different universes.)

It’s so cool how different people do amazing things while maintaining humility and perspective. Tommy has the greatest attitude and approach of anybody I’ve ever known. For all anybody can tell, the new climber doing her first 5.6 outdoors feels the same awesome feeling that Tommy does when he frees a new line on El Capitan, or that every one of us gets at our own level. It’s probably the single coolest thing about climbing, at least in my book. Ultimately, I suppose that’s the thing – it’s supposed to be fun. Of course 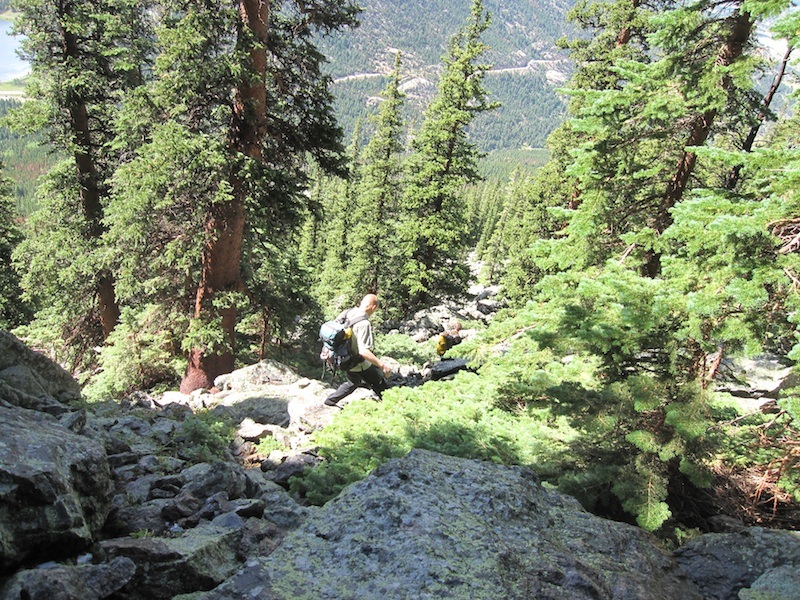 I lowered, we packed-up for the boulder-hopping hike out, and the boys looked at me funny: I still had my helmet on. That rain-soaked lichen can be mighty sketchy. Safety Kelly.

“Yeah, you probably should,” Craig and Tommy said in unison. Right then the Colorado sunshine broke through the clouds and we meandered our way back to the trailhead. I kept my helmet on the whole way, and tried hard not to slip on the sketchy lichen.

[Above, left – Tommy Caldwell, fighting hard for the send, midway through a raging thunderstorm. Right – Craig Scariot and Tommy Caldwell looking out for that sketchy lichen after the rain. Photos: Kelly Cordes]