Hopefully you've all seen the surf movie Sliding Liberia by now. We covered it a while back with the help of featured surfers Dan Malloy and Crystal Thornburg. The film's director, Britton Caillouette, wrote us with an update on the situation in Liberia since the film was released.

Nicholai returned to Liberia last year to head up a project on community-driven reconstruction. Thanks to generous donations from Patagonia, Fletcher Chouinard Designs and Stamps Surfboards, he was able to bring bags and bags of clothes, as well as four surfboards, to the kids in Robertsport. Nicholai arranged free screenings of Sliding Liberia for local audiences and foreign aid workers. One of the screenings in Monrovia, the capital city, was in a video club recently opened by Maurice Davis, one of the people featured in the film.

Much has changed in Liberia in the past year. A luxury tented camp opened on the beach in Robertsport, providing accommodation to foreign visitors and jobs to 25 local residents. Small groups of surfers have started to trickle in, and they haven't been disappointed. Alfred Lomax, Liberia's first surfer is starting to rip. A regular foot, his back-side bottom turns and off-the-lips are becoming more fluid. And he's starting to get tubed. A few more years and he'll be ready for the pro tour.

Locals are optimistic that the situation is improving, but times are still tough. Very few jobs exist in Robertsport, aside from serving drinks at the tented camp. And many families are being evicted as former refugees return back to Liberia and reclaim their homes. Alfred's family was evicted in September and is struggling to make ends meet. Everyone seems to agree that the best hope for Robertsport is to bring in more tourists – more surfers – in the hope of creating more jobs. Although the future remains uncertain, socially-conscious surf travel can make a positive, lasting change.

If you haven't seen the film, here's a great opportunity to add a true gemto your DVD collection and give something back in the process. Purchase Sliding Liberia through theironline store and $1.00 will be donated to health, education andenvironmental programs in Liberia. 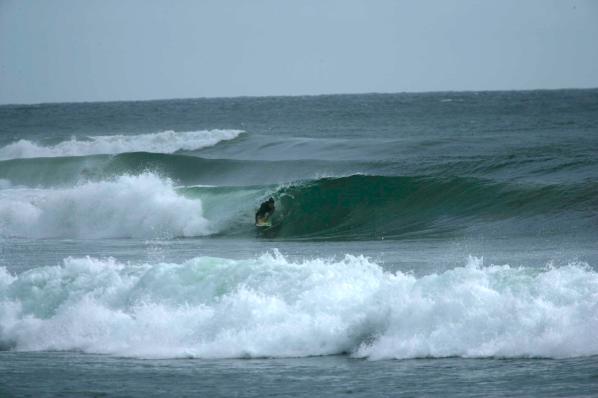 [Did I mention the waves? They're that good. Photo: Britton Caillouette]