The 2014 midterm elections are fast approaching in the United States. Patagonia supports candidates who will push hard for clean, renewable energy, restore clean water and air and turn away from risky, carbon-intensive fuels. We support leaders who will act on behalf of the future and the planet.

In this installment of her Solutions Series, Annie Leonard, founder of The Story of Stuff Project, writes about what voting and citizenship mean to her. Stay tuned for a follow-up post, with actions you can take, later this week.

Recently, trying to fix a discrepancy between my passport and driver’s license, I had to go to the Department of Motor Vehicles. I arrived at dawn to stand in a line down the block. It started raining; soaked and frustrated, I left. Before the next visit I made an appointment on the DMV website, but when I got there the queue still looked like Soviet-era shoppers outside a Moscow grocery store. Finally someone suggested I go the day before a holiday, and so it was that I spent the morning of Christmas Eve rectifying a bureaucratic error.

Artwork (above): Flower Power by Amy Diebolt. A portion of the proceeds benefit the artist and HeadCount.

The dysfunction of local bureaucracies like the DMV—government at its most up-close and personal—can lead us to think of government as more a source of frustration than solutions. And this frustration reaches to the highest levels.

Disgusted by partisan sniping and bureaucratic inefficiency, Americans hold a historically low opinion of our government: 80% or more of us don’t like the job our elected officials in Washington are doing. Of all the words that come to mind when thinking of our government these days, “solutions” doesn’t top the list. In fact, the other day my teenager joked that if the opposite of pro is con, the opposite of progress is Congress.

It makes me sad. Because the thing is, I want to believe my government is working for our—and the planet’s—well-being. I want to love my government. I want to feel the same enthusiasm as the people I met in Haiti after they voted in the country’s first democratically elected leader, ecstatically waving signs proudly proclaiming that Jean-Bertrand Aristide was “My President.” I actually carry around a pocket copy of the U.S. Constitution to remind me of the high ideals on which our government was founded. (It’s also something to read when stuck in line at the DMV.) But since there’s such a gap between our government’s potential and day-to-day reality, I often feel like John Lennon when he sang, “It’s so hard loving you.”

Artwork: The Eagle Has Landed by Kat Bush.

How can those of us who want our government to promote solutions for a clean environment, a fair economy and equal rights for all resist giving in to disillusionment when it so glaringly fails to live up to its promise?

Let’s start by reminding ourselves what government is, or is supposed to be. It’s a vehicle the nation’s founders created to take us to a better future. The problem is that the vehicle has gone off track.

Think how you’d feel if your car was stolen. Irresponsible hoodlums take it for an out-of-control joyride, start driving it in the wrong direction, terrorize innocent pedestrians and cut donuts on the lawn in front of City Hall. If you have a chance to get it back, do you shrug and say, “Nevermind, they can keep it. That car sucks so bad I’m not going to drive anymore?”

I didn’t think so. But that’s the same attitude as people who—dismayed by the hijacking of democracy by corporate polluters, Wall Street fat cats and corrupt politicians-for-sale—shrug and write off government. Today, too many Americans can’t be bothered to vote, much less lend their energy to a campaign to strengthen the Clean Air Act, protect wilderness or raise the minimum wage.

Instead of only focusing on the ways our government annoys or disappoints us, I like to remember the good stuff government does for us every day: putting out fires. Providing clean drinking water (in most places) from our very own taps. Keeping airplanes from crashing into each other. For inspiration about government’s potential on bigger issues, I like to remember the times government stepped up—often after lengthy citizen campaigns—to do the right thing like ending child labor, banning lead in gasoline and enforcing desegregation. And, above all, I like to remember that it’s a government “by the people” and “for the people.” That we have a hand in what direction we want the government to go, and influence over how it gets there. We’ll talk about how to do that next time. 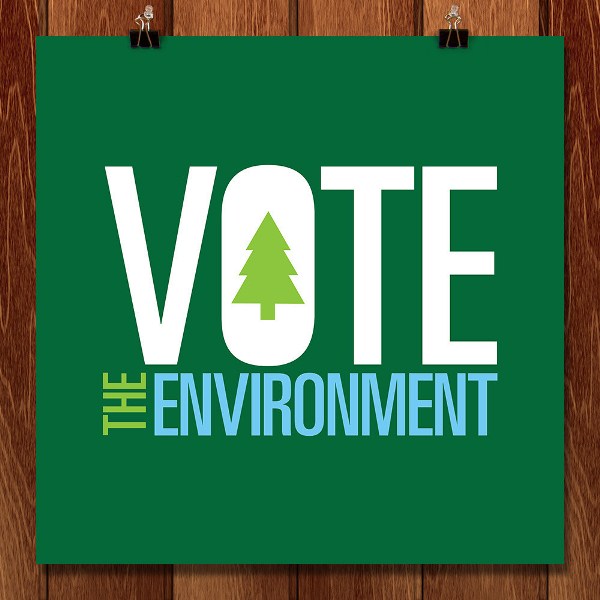 Join us. Get informed. Take the planet into the voting booth on Tuesday, November 4, 2014. Artwork: One Vote Can Change Everything by Andrew Lynne.