Some places seem special, and I can’t always articulate why. I think it’s the smell of the air, the look of the place, the memories it holds. In a sense, Hyalite Canyon, near Bozeman, Montana, one of countless canyons in the American West of similar scale, isn’t extraordinary. Until you begin to unlock its secrets, which include over 200 ice and mixed pitches, and an incredible history of human experiences. 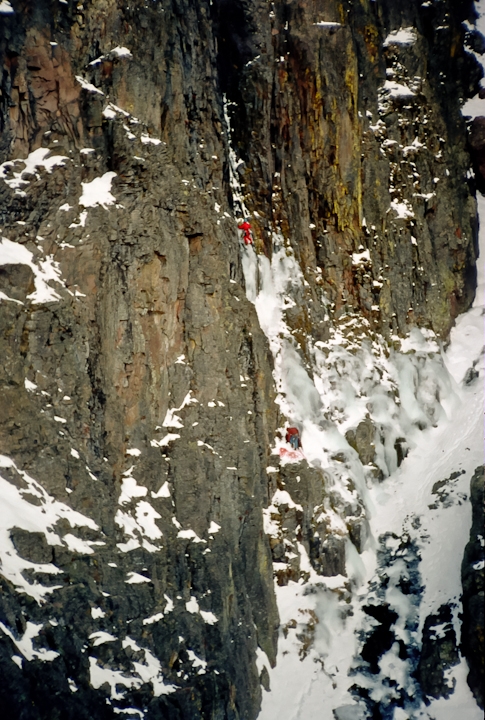 This weekend is the 15th annual Bozeman Ice Climbing Festival, and so I got to thinking of writing about their festival, but the festival exists because the place exists, the memories exist, the legacy of Hyalite that has influenced so many of us. Me included, and in so many ways. One of the first places I learned to climb ice, some 18 years ago, was Hyalite. And Hyalite was the last place that I climbed waterfall ice – on February 1, 2010, the day I shattered my leg. 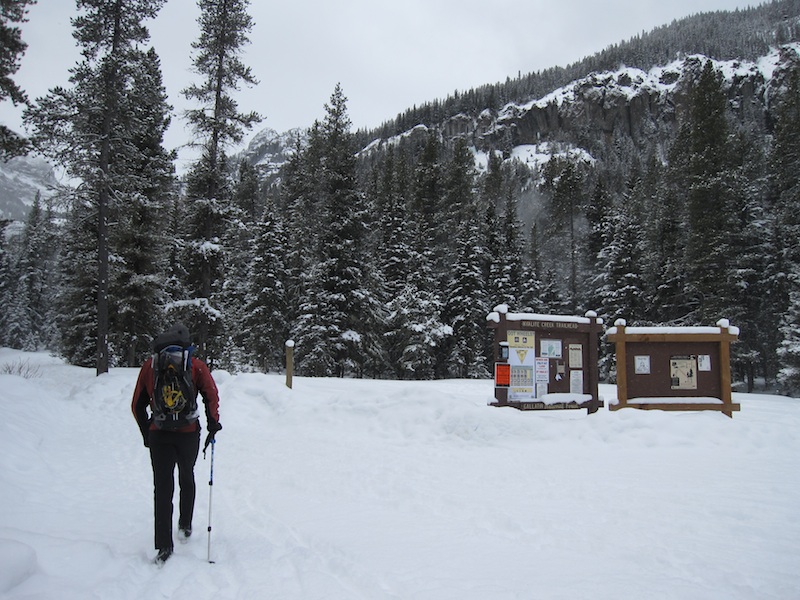 Hiking from the Hyalite Canyon Trailhead, on my last visit.

I remembered a reply that I’d sent to Joe Josephson, a prolific climber and writer, and organizer of the fest, when he was writing his awesome, thorough profile on Hyalite in Alpinist 36 (Q&A with Josephson here). I scribbled it fast, email style, a massive run-on about my memories of Hyalite:

Thanks for thinking of me, JoJo, and reading your email brought back great memories. Hyalite has been an incredibly influential place to me, from being one of my first climbing areas, a place where I was hugely influenced watching Pete Tapley’s skill and calm while belaying him on Shores of Pluto, and learning more about the place and wanting so bad to be like two of my heroes — Alex and Jack — and even a time in the parking lot when I was bivied in my rustbucket Subaru and heard Alex in the parking lot and “casually” woke up and hurried out to pretend I was just getting up — all I ever wanted in life at that moment was to meet Alex Lowe, and he made me feel like I was somebody worthwhile, just like Jack Tackle did the first time I met him — to evolving to where I could climb what’s still the best ice climb I’ve ever done (Winter Dance), and then, ultimately, an accident that has changed my life and my abilities to climb like I used to, and, when it happened, the memories I had sitting in the snow below The Thrill Is Gone, my leg flopping off to the side, knowing that my life had just taken a big shift, but still looking across the canyon to the Genesis area, one of the places I learned to climb, seeing people there that very day, and then over toward the Sceptre area where I knew Tapley and his buddies were — I’d run into him in the parking lot that morning, hadn’t seen him in years, big hug and obligatory bullshit session — and I remember sitting broken in the snow and seeing all of that, and Winter Dance, and the snow blanketing the canyon, light flickering down, ice flows rolling and hanging and spattered throughout, and memories past and forming and all changing, and even with all the pain of my destroyed leg I looked across Hyalite and smiled, and felt grateful for every last bit of it.

When I let my mind drift to what seems like a lifetime ago, those early years scratching around Montana with the greatest of partners, cutting my teeth in the Missoula area and road-tripping to the better ice in Hyalite, well, damn, I get nostalgic. I think mostly of things like our endless bumbles while trying to climb routes on which we’d sometimes succeed, but usually fail, like in this short story by my good friend Dan Gambino (“The Danimal”). I enjoyed it; I hope you do, too.

Fall of ’97 I was an out-of-work NOLS instructor and needed a place to crash. Pete Tapley had offered me his gear room, where I slept on a crash pad. I quickly became a piece of Pete’s gear. At o’dark-30 the door would open and Pete would grab his pack, rack, rope and partner (me), and load-up the car for the frightening drive up the canyon. Often times the drive was ice and avy terrain from door to door. Eighteen miles of icy two-track in my ’86 2wd Subaru, followed by approach gullies with pillows of unstable snow and then, of course, the climb: simply put, grade 4 in Hyalite is grade 5 in my current state of hacked-out Colorado, and all the while I remember knowing that after the climbing we’d have to rap off of threads and shitty rock anchors, usually in the dark. Hyalite always had a huge sense remoteness and commitment for a “local crag.”

Zack Attack is such an obvious line it’s surprising that it hadn’t been done before. Matter of fact my first time in Hyalite I saw the discontinuous ice, high above the parking lot, and asked Pete what it was. He didn’t know, so it seemed worth a recon. The cool thing about the route is that it has a great alpine feel due to its length and position. Straight from the lot you solo the Genesis climbs and then continue up a long section of snow and low-angle ice until you’re finally at the base.

We named it Zack Attack after Pete’s son, Zack, who was two or so at the time. I am sure Pete would like to have named it Tattered Bloody Soul Ribbon or something from a Skinny Puppy song, but Kelly Cordes, Frank Tazzara and I outvoted him. On the drive-up the day of the first attempt, with Metallica’s “Battery” blasting from the cassette player, thinking of Zack and their dog, Jasper, the four of us sang our own version of the song. We called it Zachary.

The first day, Kelly and Pete did the first two pitches while Frank and I found a cool gendarme in the sun and snapped photos. Pete and I returned a few days later and finished it, repeating the first two pitches and adding two more. The last pitch ended up being my lead – a heinous, steep, sun-f*cked and dinner-plating pillar. I gave it an aggressive attempt but freaked, backed off, and Pete finished it. We rapped in the dark (of course) with only one headlamp (of course). Pete, being heavier and being a dad, would go first and then I’d pull any backups and aim for the tiny yellow light blinking in the dark below.

It wasn’t until later that we learned the best part: We beat Alex Lowe and Jack Tackle to the first ascent. They’d come up to do it the very next morning. They probably cruised it (and hopefully enjoyed it), probably didn’t rap in the dark and probably weren’t listening to “Battery.” But that doesn’t matter and, come to think of it, that really wasn’t the best part anyway. 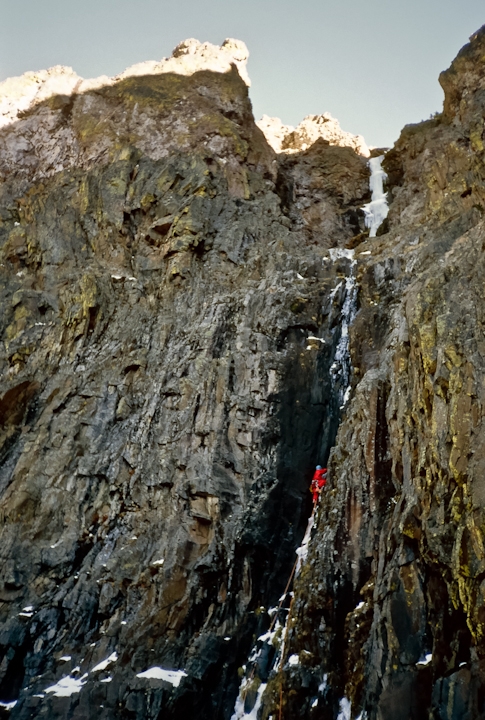 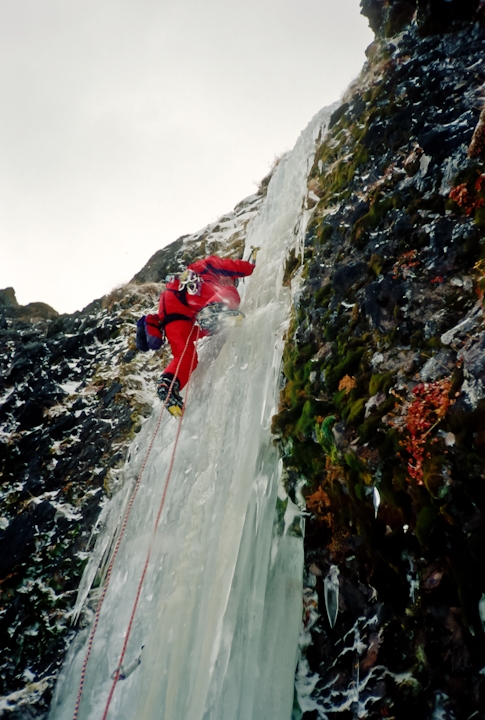 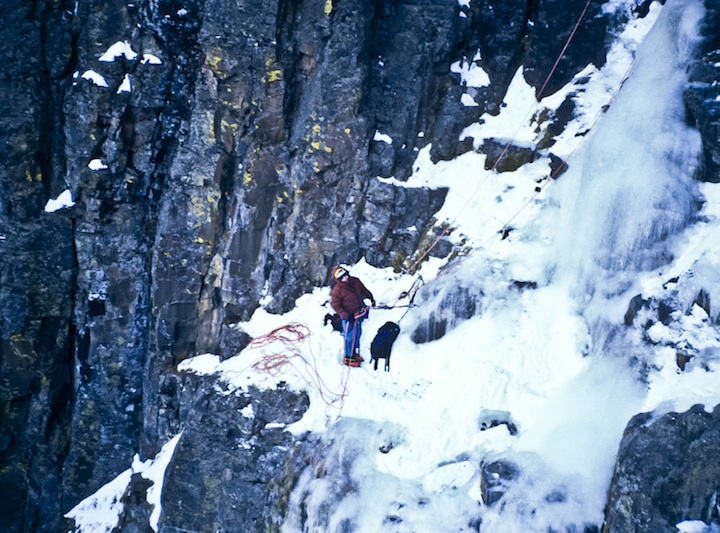 Kelly Cordes, freezing his butt off at a belay on an early attempt at what would become Zack Attack. Photo: Dan Gambino 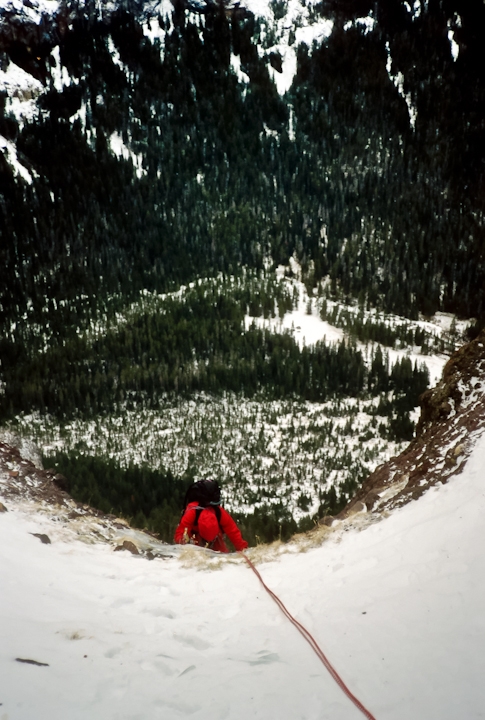 Editor’s note: Tomorrow night at the Bozeman Ice Climbing Festival, there will be a special event:

Here’s a clip from Yvon’s section (via Cold Splinters); Part 2 will screen on Saturday night.