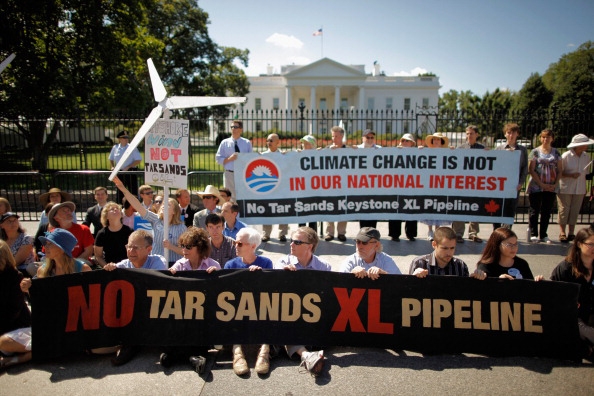 [Demonstrators in front of the White House protesting a proposed pipeline that would bring tar sands oil through the U.S. from Canada. Photo: Chip Somodevilla, Getty Images]

From mid-August to early September this year, concerned citizens gathered at the White House to protest the Keystone XL Tar Sands Pipeline. Over 1200 people were arrested during this peaceful protest, and their act of civil disobedience, along with similar events and petitions nationwide, sent President Obama a simple message:  Stop the Keystone XL Pipeline.

The Keystone XL Tar Sands Pipeline would originate in Alberta, Canada and pass through the West and Midwest of the United States ending up in Houston where most of the oil will be shipped overseas. Six companies have contracted for three-quarters of the oil. Five are foreign.The New York Times in an editorial opposes the pipeline.

Nebraska Cornhusker football fans booed when a Keystone ad showed up on the Jumbotron at a recent game. The next day the university ended their sponsorship deal with Trans-Canada Pipeline.

Tribal leaders from both sides of the border and private land owners from South Dakota and Nebraska signed a ‘Mother Earth Accord’ opposing Keystone XL. The Dalai Lama and Archbishop Tutu along with seven other Nobel Peace Prize winners oppose the pipeline.

Ranchers and farmers are fighting the pipeline. Ben Gotschall grew up in Nebraska's Sand Hills. His family has been ranching there for four generations. He opposes the pipeline even though the Tar Sands XL is being sold as oil from a “friendly” neighbor.

"Where I'm sitting, having an oil pipeline in my backyard, in my drinking water, that's not a very friendly neighbor," Gotschall told NPR. "That's not what neighbors do, at least where I was raised."

Corruption and accusations of a too-cozy relationship with the State Department plague the pipeline.

On Sunday November 6th, the movement returns to Washington. Exactly one year before the next presidential election, thousands of protesters will encircle the White House, to remind the president, our government and the nation that the Keystone XL Pipeline has no place in a national vision of clean energy.

We know it’s hard to get to Washington, but if you can, this is the moment.

1) If you live in the USA, go to TarSandsAction.org for ideas on getting involved. The action begins at 2 pm in Lafayette Park.

3) Sign the petition at 350.org demanding President Obama to reject the pipeline.

3) You can stand in solidarity with everyone taking action in DC by sending a message and photo to the protesters in DC.

5) Be a “ human microphone” for Tim DeChristopher, a protester who is serving time in prison for his peaceful protest against oil and gas leasing on federal lands. Tim can’t be at the protest on November 6 but you can be his microphone.