Wolf, bear, human – in August 2010 Cameron Lawson and Brett DeWoody took a wild, 350-mile bicycle and packraft journey from Yukutat to Cordova, along Alaska’s “Lost Coast,” following bear and wolf tracks, navigating heinous brush and swollen river deltas, engaging in true wilderness under their own power. Lawson, a photographer and a pilot, had flown a small Cessna over the Lost Coast the year before, but covering the same terrain by bike and packraft proved a wholly different experience – of course – and Lawson’s images and words give us a fantastic insight into a real-deal adventure. Check out his slideshow in the Patagonia video gallery – here’s the direct link (sorry, techy stuff won’t let me embed it). 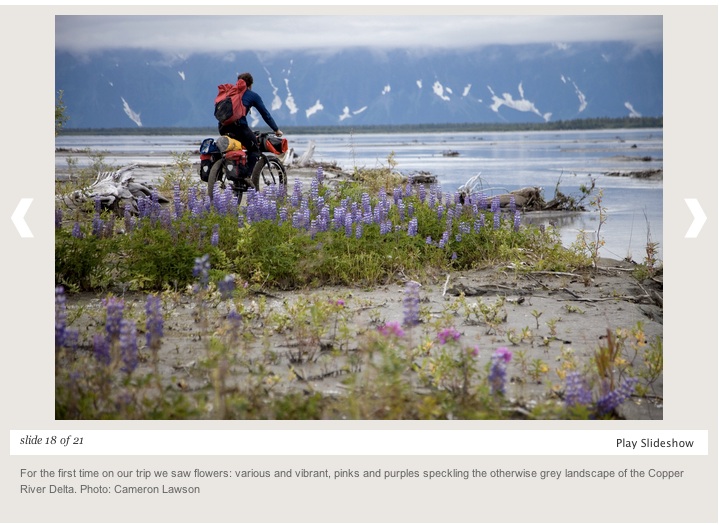 It’s a video world, and Lawson’s is a still-photos-with-written-captions story, but that doesn’t matter to me: I love good storytelling. I don’t care so much about the medium, though the differences intrigue me.

Combine great imagery with great story, and you create incredible art. Here’s a short piece that’s has received a ton of accolades, and is one of my favorites – mind-blowing imagery with sparse, beautiful narration from Irish surf photographer Mickey Smith.

DARK SIDE OF THE LENS from Astray Films on Vimeo.

I’m a huge fan of podcasts, too – audio storytelling as well as entertaining b.s. on topics of interest to me – while driving or out on a walk (What, you go for walks? I know, I’ve gotten soft, big news flash…), I probably listen to audio stories at least as often as I listen to music, which I also love. Speaking of which, how cool to get an icon like Yvon to do a short audio story – maybe we could get him to do a weekly show, call it the…the…Yvoniconcast? Er, on second though, maybe not. We already posted Yvon’s piece on Monday, but here’s the direct link if you missed it (it lives in our podcast library).

Anyway, enjoy Cameron’s show, the Dark Side of the Lens, the Master’s Apprentice and whatever else inspires you – and thanks to the artists who produce such work. Long live good storytelling.