When the Deepwater Horizon drilling rig sank in the Gulf of Mexico on April 22, 2010, it led to what is today the worst environmental disaster America has ever faced. The international oil company, BP, is held largely responsible, and by the company’s own worst-case estimates, as many as 4.2 million gallons of oil a day flowed from that deepwater hole some 52 miles off the Louisiana coast.

Many of us at Patagonia were devastated and disheartened by the Gulf spill. So much so, that our employees (including our ordinarily tight-fisted CFO) joined together to develop a program to dive in and help out. In mid-July, we started sending up to 10 employees per week to Louisiana to work with a long-time environmental partner, the Louisiana Bucket Brigade in areas affected by the spill (All expenses and salaries were paid by Patagonia). The Brigade is creating an Oil Spill Crisis Map, and our employees helped to gather information, stories and photographs in communities where oil has reached the shoreline and impacted wildlife. All of this information is being uploaded into the map – a living document that speaks to the environmental and health effects of the spill. It will serve as an open source of information that shows NGOs, governmental agencies, state and local wildlife agencies and the general public where help is needed most.

Patagonia folks bunked down in trailers and local churches in Lafitte, Grand Isle and Plaquemines Parish and walked door to door to door to interview residents about their immediate needs, adverse health effects, environmental harm and cultural loss. We thought you might like to read a few stories from them, of birds falling dead from the sky, forsaken shrimp boats, of living on church lotteries and finding oil in the bathtub. Join us each day this week for a fresh report straight from our recent work in the Gulf. 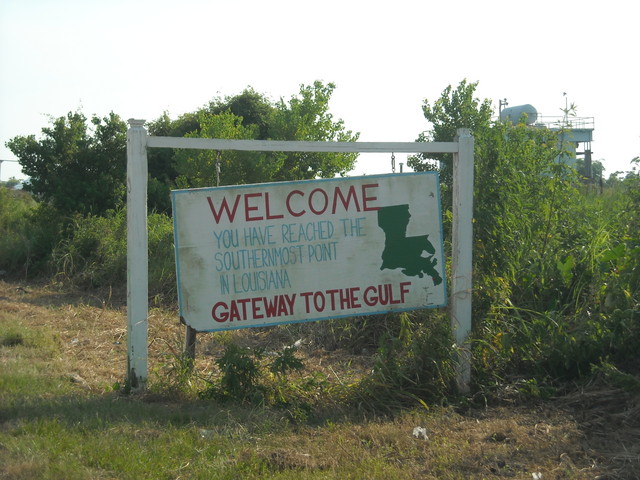 We did then, what we knew best to do

Patagonia teamed up with the Louisiana Bucket Brigade (LABB) and sent 7 groups of 10 employees to volunteer in the coastal Louisiana communities affected by the oil spill in late summer. I was fortunate to be one of the 70 randomly chosen from the 250 employees that asked to participate. The Bucket Brigade is a non-profit environmental health and justice organization working with communities that are near the state’s oil refineries and chemical plants. The Brigade has been a beneficiary of the Patagonia Environmental Grants program for many years. During my tenure on the Grants Council we awarded them two separate grants. 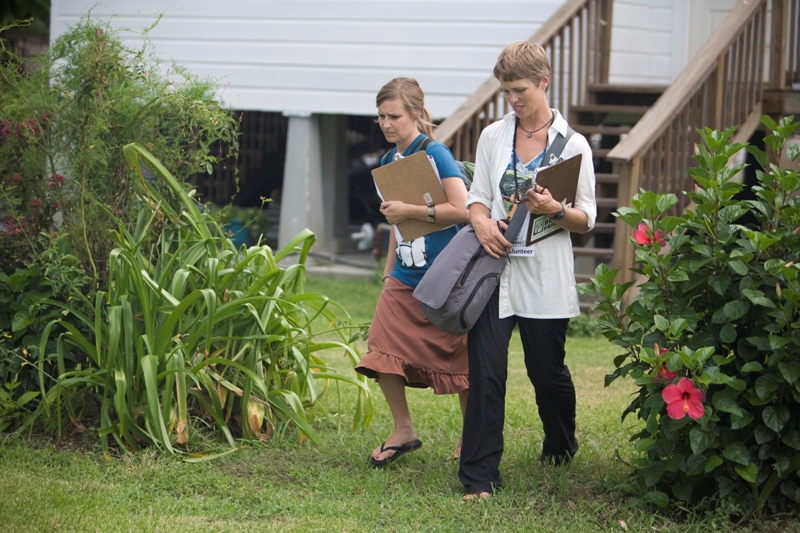 I spent the week talking to many members of the lower Plaquemines Parish (a parish is  like a county) about any health and livelihood affects they have experienced since the oil spill. The information we gathered (over 150 surveys that week alone) will be used for the oil spill crisis map that the LABB has created on their website. The oil spill crisis map visualizes reports of the effects of the oil spill submitted via data from LABB volunteers, text message, email, Twitter, and the web. The information is used to provide data about the impacts of the oil spill in real time as well document the story of those who witness it. The hope is to document and make public the effects of the BP oil spill. By making all information public, there will be more transparency, accountability, and effectiveness in the oil spill response and cleanup. 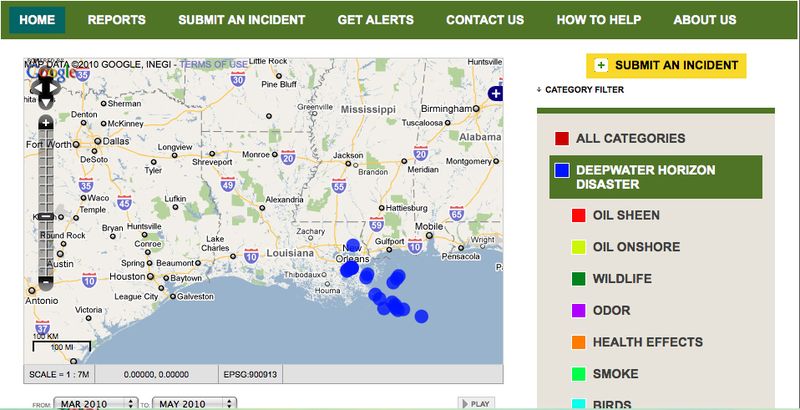 We stayed in the small town of Empire that is about 2 hours south of New Orleans. Empire is about 20 minutes away from Venice Marina where many of the CNN, ABC, and NBC news crews have been reporting from. This parish was not only wiped out by hurricane Katrina five years ago, but now it has been devastated from the affects of the oil spill. This area of the state relies on commercial fishing as their main source of income, providing 1/3 of the seafood for our nation. Since the oil spill, fishing, shrimping, crabbing, and harvesting oysters are no longer an option. The sea life that has survived the spill is not safe to consume. I was told that the few local fishermen who were hired by BP to assist with the cleanup were paid a small fraction of what they would be making if fishing. Despite the low compensation, many that I spoke with were happy to have some kind of job. Sadly, the jobs did not last very long. According to a number of community members that I spoke with, starting in July, BP cut most of the cleanup jobs and those they kept were paid 1/4 (or approx. $1,000 per month) of what was originally promised. 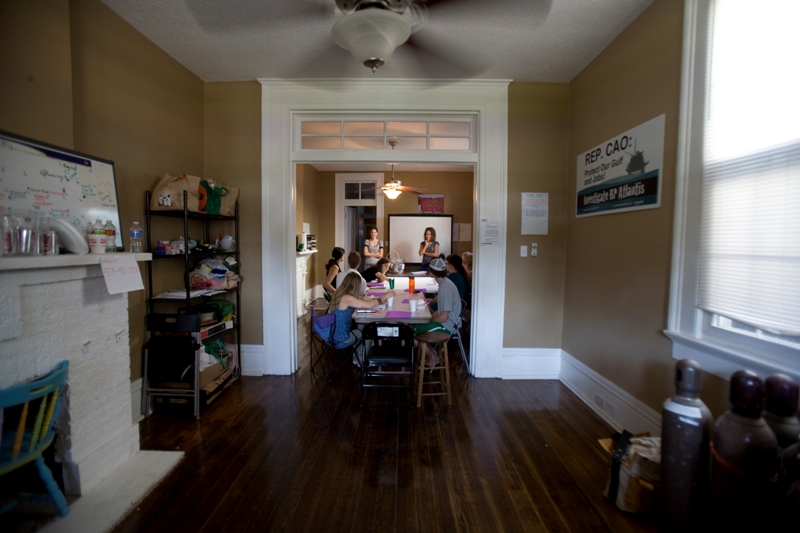 We spent some days going door to door, and some days posted in front of the grocery mart or local pharmacy. I met Penny on our first day in Empire. She opened her door, saw us standing on the porch dripping sweat in the 110 degree temperature, and asked us in before we could even finish telling her what we are working on. Penny has two children under the age of 5 and her husband is a shrimper. He earns the majority of his income working very long days for the three months in the summer that is the shrimping season.

According to Penny, it’s plenty of money to support the family until the next shrimping season comes. This year is a different story. Because of the oil spill, there is no shrimping season. Her husband was one of the few to get hired by BP for the clean-up effort. He received two months of pay (which equaled less than a third of what he usually makes shrimping) and he was still waiting to be paid for July. Penny explained that he didn’t want to go work for BP knowing that they are the reason he is out of a job, but he had to do whatever he could to support the family. 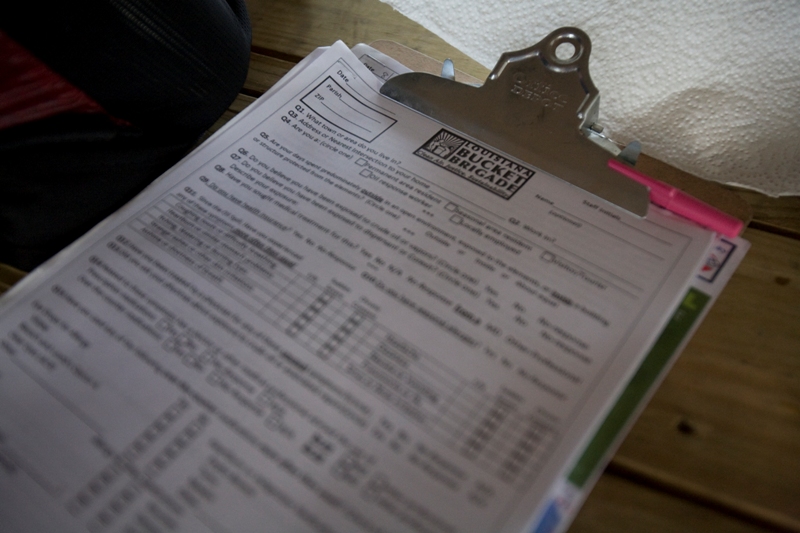 In addition to the financial stress her family is going through, her two children have been more sick than usual for the last few months. She’s afraid to let them play outside because when they do, they complain of itching and burning eyes and they have coughing bouts. Sadly, the situation that Penny shared with me was not unusual. Some families are doing okay right now, but have no idea what next month will bring. Others are trying to figure out how they will pay their electric bill and buy groceries. And most are experiencing some kind of health side effect from the BP oil spill. I don’t want to bring readers down by sharing what I saw and learned over the last week, I just want them to be aware of the real effects of the BP oil spill.

I am amazed at the drastic contradiction of what I saw and read about the spill before I went to Louisiana and what is actually going on in the communities hardest hit. Before my week of volunteering, I viewed the oil spill as mostly an environmental disaster. The articles I read and the news I watched spoke very little about the affects of the oil spill on the people of the Gulf Coast communities. After spending a week in Plaquemines Parish speaking with various community members and attending the town hall meeting, my understanding of the effects of the BP oil spill are much clearer. Not only is it the worst environmental disaster of my lifetime, it’s crippling the livelihood of entire communities.

This is why I am sharing my experience with you. I hope that you, too, are outraged by the reality and are inspired to do whatever you can to assist. Don’t worry, there are always baby-step options. Just educating ourselves on the BP oil spill can help us to make smarter choices for ourselves and our families. Another option is choosing to help reduce our country’s dependence on crude oil by making educated decisions about our way of life. By simply being aware of the items that we choose to purchase or consume we can reduce the demand for petroleum-based products. We can cut back on our driving by taking public transportation, biking, or walking once in a while. We can voice our concern about the cleanup and demand accountability for the BP oil spill to our state and federal representatives. Yes, one voice matters.

This experience has made me think of one of my favorite quotes by Maya Angelou. “We did then what we knew best to do. Now that we know better, we can do better.”

[Top, right – Adrienne Primosch and Lisa Myers knocking on doors in Cocodrie, LA. Photo: Christina Speed. Top, left – The LABB’s Oil Spill Crisis Map. Citizens can learn more and contribute to the map at www.oilspill.labucketbrigade.org. Above, right – Patagonia employee volunteers in training at the LABB office in New Orleans before heading out into the community. Above, left – The LABB survey covers the health and economic impacts of the BP oil spill on the residents of southern Louisiana. Photos: Christina Speed.]