I’ve long thought that the most wasted resource on earth is talent. Talent abounds, yet optimizing its potential requires devoted effort. Of course we also have to consider opportunity, and the whole talent-and-effort issue makes regular news. There’s the “10,000-Hour Rule” of practice, popularized by Malcolm Gladwell in his celebrated and best-selling book Outliers – underscoring the importance of effort.  Recently I read an article about intellectual giftedness – underscoring the importance of talent.

As far as natural ability goes, exceptional athletes are everywhere. Those who fully maximize that talent through hard work and effort, however, seem rare; I suspect they have to love it, truly love it, deep-down love it. Not just love success, or even the idea of success. Not just talk about it, and not find excuses when things get grim. 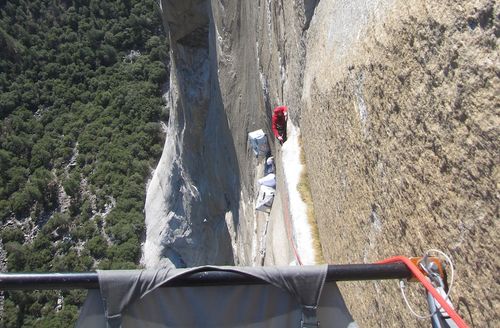 Being immersed in the climbing world makes me especially appreciate the talented and the driven. Too often, it seems to me, those with exceptional talent let it fade; perhaps – my theory here, borne from my years in sports – the naturally gifted get accustomed to success with little effort. Things come easy (to a point). Maybe they get used to effortless achievement and don’t know what it’s like, or don’t have the love, to dig, fight, bleed, persist and persist some more. And at the highest levels, you need both. You need the talent and you need the drive. It’s an amazing thing to see them come together.

It’s also rare. Reminds me of an old joke – Q: How many climbers does it take to screw in a light bulb? A: Ten. One to actually do it, and nine to stand around and say, “I could totally do that.”

Never in my life, through my competitive college sports (boxing) years, my subsequent endurance sports days, and my decades of climbing, have I met anyone who tries harder than Tommy Caldwell. (To say that he’s also talented, gifted, is obvious.) If you haven’t read his exceptional post wrapping-up his thoughts on trying the hardest bigwall rock route in the world, it’s right here.

I’ve also long maintained that the best climbs are the ones where serious climbers, giving their best, either barely succeed or barely fail. When giving your best, of course, “failure” is not a truly accurate term. To be sure, there’s a difference between internal success, like the much-talked-about “personal experience,” and clipping the chains or crossing the finish line; for objective reporting of results, we shouldn’t confuse the two. Yet either way, barely succeeding feels a lot better than barely failing. From which do we learn more? And where do we go from there? 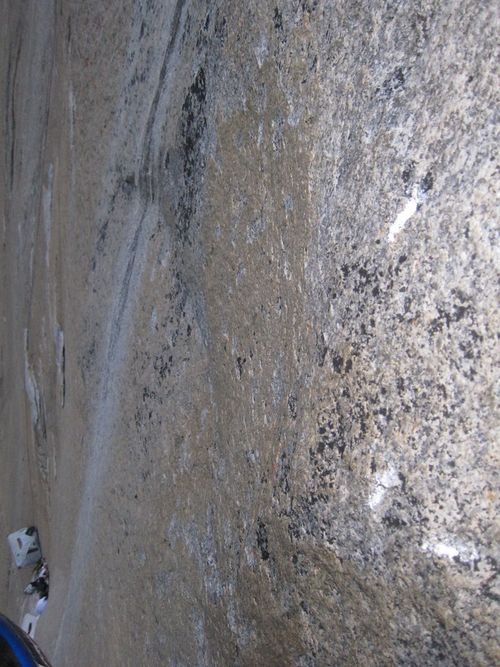 While in Yosemite recently, I spent a short time up on the wall with Tommy, relieving Becca, his wonderful wife, by doing belay duty until Tommy’s dad came up to take a turn. More than a thousand feet off the ground, with dizzying exposure, Tommy dispatched one 5.13 pitch with such ease I thought he must have been pulling on jugs, until I jugged past and saw the holds myself. And then, on the crux 5.14+ “Thumbercling” pitch, he made little tick marks with chalk to point him to what, ostensibly, were holds. Except I couldn’t see anything there. Left me dumbfounded. I couldn’t begin to comprehend the features he was climbing on. Watching him try so hard, and the non-existent holds he was climbing on and falling off, left me in awe. The sort of inspiring effort that overrides any simple designation of “success” or “fail.”

Soon after, as his performance declined from 16 consecutive days on the wall and his skin had withered down to nothing, he called it. The day after he came down, I remember hanging with him and Becca. He said it was great to be on the ground, but he wasn’t sure if he’d gotten the Dawn Wall out of his system just yet.

A day or two later, while driving out of the Valley – snowstorms were rolling-in that night, it was time to go, season finished – I saw the Caldwell van parked in the meadow. We stopped. Looked in the windows. Nobody inside. I walked to the clearing in the trees where I could see the pitch that had shut Tommy down, and peered through binoculars. The camera crew that’d camped up on the wall, filming his every move, was gone. After all, Tommy had officially pulled the plug, winter was coming. And though documentation of his efforts has been nearly continual, in the end it’s a by-product, not a motivation. 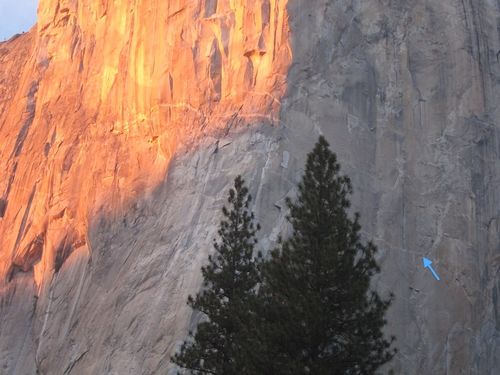 Up on the wall that late afternoon, in fading light I could see two figures. I’d tuned-in just in time, his only spectator aside from his devoted partner and wife, Becca, belaying. I watched as Tommy downclimbed off the portaledge and into the traverse – he looked strong, rested, and I cheered in a whisper, watching him climb smoothly into the crux, firing one move after another, until, suddenly, he fell, dangling from the end of the rope thousands of feet above the pines as late-fall sun bathed the opposite side of El Cap in brilliant orange. Tommy pulled back up to feel the holds one last time. No send. No excuses, either – he was still trying. Either because he wasn’t ready to let go yet or because he was still in love. Maybe both.

Speaking of talent, I have one: making margaritas. And drinking them (OK, that’s two). While road tripping to Yosemite, boxed red wine and PBR proved far easier, but on occasion we’d bust-out the margs. 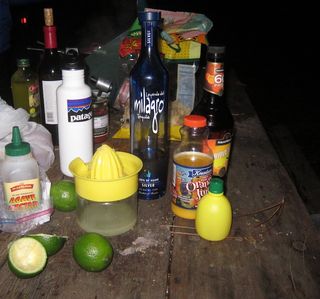 Milagro Silver: A solid tequila, especially for the price (and we found it on sale, an added bonus). It’s 100% agave, of course – never forget, no matter how cheap you go, 100% agave is the baseline.

Triple Sec: Go cheap, you’re on a road trip. Use about one-third triple sec for each part of tequila.

Limes: Get ‘em fresh. Invest the $4.99 in a manual juice squeezer, and if you start by rolling the limes to soften ‘em, and maybe even microwaving for about 15 seconds per lime (which wasn’t possible in the campground), the juices come plentiful. Work hard and you should be able to get about 2 oz. of juice per lime. Though I brought my lime squeezer to Yosemite, here’s a dirtbag tip: after softening the limes, if you don’t have a squeezer, cut ‘em in half and then use a fork to mush and mash the juice out. Works well.

Lemon & orange: Squeeze some of each. Or, if you’re lazy, just get ‘em from the store. Lately I’ve been enjoying a strong bit of orange – like half a fresh orange for every full lime. Try it, it’s good.

Agave nectar: Sweetener made from the same plant tequila comes from – perfect. Just a couple of squirts per squeezed lime tends to do it. Adjust to taste.

Marg: About half alcohol (i.e. mostly tequila), and half the other stuff. The other stuff is mostly lime juice, with some orange and a splash of lemon, plus a squirt or two of agave nectar. Adjust to taste, and remember that taste testing is fun. You have to love the process, not just the result.

Put it in a shaker (water bottle) with some ice, and shake the sweet bejesus out of it. Pour it into a salted glass if you have it; just swig from the bottle by the campfire if you don’t. Don’t drink too much or it’ll be hard to climb the next day.