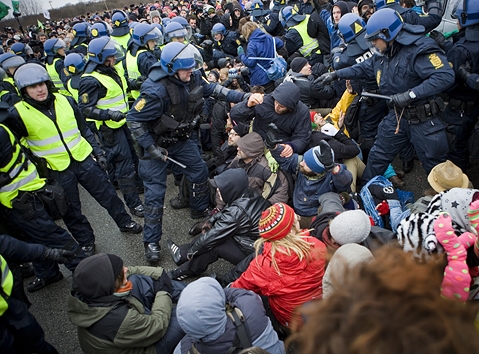 You met them first on the Obama Express. Now, Santa Barbara Independent reporter Ethan Stewart and freelance photographer Kodiak Greenwood are in Copenhagen to cover the United Nations Framework Conference on Climate Change. This morning the boys — who’ve dubbed themselves “Operation Copenhagen” — awoke to violence in the street and tear gas in the air.

Before we even had a chance to find our morning cups of coffee, Kodiak and I were breathing tear gas for breakfast at the COP15. An organized march called the “Push for Climate Change” took a radical turn this morning outside the Bella Center as protesters and police clashed. More than 250 people have already been arrested in the several hours long stand-off while other, smaller, confrontations have broken out in the city’s center. For a complete report on the unfortunate and violent developments at the United Nation’s Climate Change Conference check back soon at www.independent.com/climate.

[Above: Images like this were par for the course before lunch today in Copenhagen. Photo: Kodiak Greenwood] 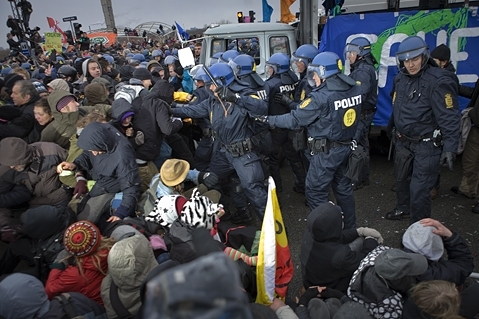 [The march outside the Bella Center turned ugly today as climate change
activists clashed with Danish police. More than 260 people have been
arrested and the day isn’t over yet. Already other confrontations have
broken out in other parts of the city. Photo: Kodiak Greenwood] 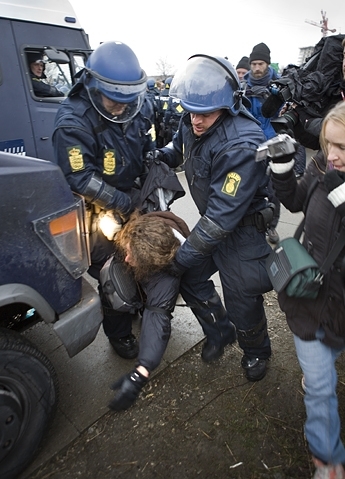 [One of hundreds of arrests already in Copenhagen today. Tear gas, baton
beat downs and civil unrest were not uncommon outside of the Bella
Center this morning. Photo: Kodiak Greenwood] 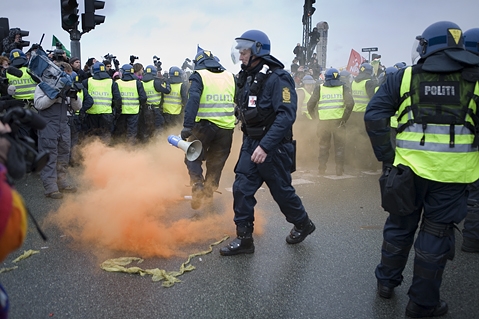 [More of the mid-morning mayhem in Copenhagen. Photo: Kodiak Greenwood]

Our thanks go out to Ethan and Kodiak for being in the mix and allowing us to share their work. Read on for some links and excerpts from their time at COP15 so far.

December 2, 2009
The Case for Copenhagen
“Heralded by many as the biggest environmental moment of our lives, the two-week conference is the ideal time to come together as one world, reflect on just how royally screwed we all are, and, above all else, begin to move forward.”

December 10, 2009
Operation Copenhagen Commences
“From advertisements touting the perils of a climate change ravaged world lining the terminal hallways to green clothed Conference volunteers lurking at nearly every corner along the way to provide information to Conference specific instructions flashing at the airport’s metro stop, the city’s commitment to this international and potentially historic two-week gathering is impressive.” 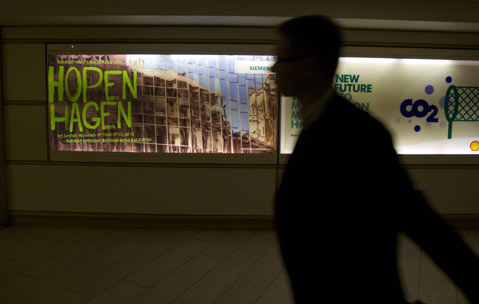 December 11, 2009
Of Credentials, Crowds, and Climate
“Make no mistake folks, once you enter the undulating, groovy green vortex of the Bella Center where the conference is located, you better have a game plan or else you may never be heard from again (though you probably would be recycled somehow).” 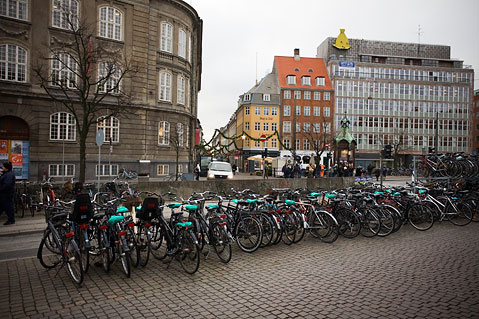 [Bikes are everywhere in Copenhagen and most of them aren’t even locked. Photo: Kodiak Greenwood]

December 12, 2009
Taking It To The Streets
“While things were relatively quiet at the COP15, it was anything but in the streets of Copenhagen. Tens of thousands of protesters from around the world gathered in front of Denmark’s Parliament building throughout the morning with designs on making the nearly 5 mile hike to the climate change conference’s headquarters at the Bella Center and letting conference delegates know just how disappointed they are in the current track the negotiations are taking.” 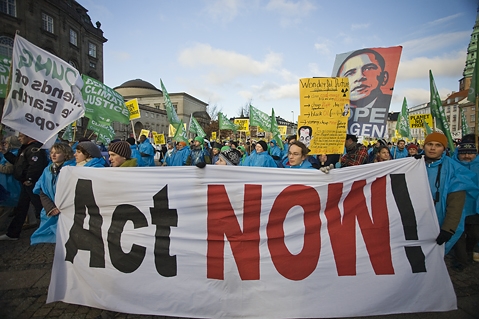 [Protesters took it to a new level today in Copenhagen. A reported
100,000 people marched from Denmark’s Parliament building to the COP15
with more than 900 of them getting arrested along the way. Photo: Kodiak Greenwood]

December 13, 2009
A Lens-Eye Look at COP15
“Sit back and enjoy some of Kodiak Greenwood’s images from the past few days in the trenches. A health food eating machine that can fall asleep on command, this Big Sur native is an artist of the highest degree.” 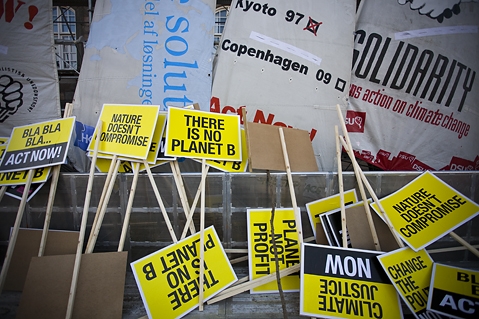 December 14, 2009
Lockouts and Walkouts
“In a dramatic turn of events, at a time when every minute of sub-group horse trading on big ticket items is crucial as the negotiation process ramps up for the arrival of top level heads of state later this week, delegates from several developing countries- including several African nations, Brazil, India and China- walked out in disgust in the middle of the talks.” 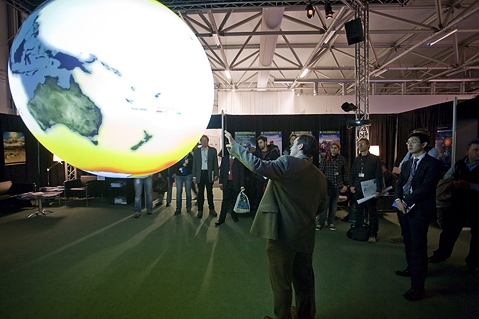 [Monday was the official “Ocean’s Day” at the COP15. Here, a
representative from the U.S.’s National Oceanic and Atmospheric
Administration (NOAA), presents the bad news about ocean acidification
with a little help from a really cool, glowing globe. Photo: Kodiak Greenwood]

December 16, 2009
The Final Phase Begins
“The final phase of the COP15 officially got under way this evening at the Bella Center and, in our honest opinion here at Operation Copenhagen, if you are holding your breath waiting for a definitive climate change fighting agreement, you better plan to pass out.”