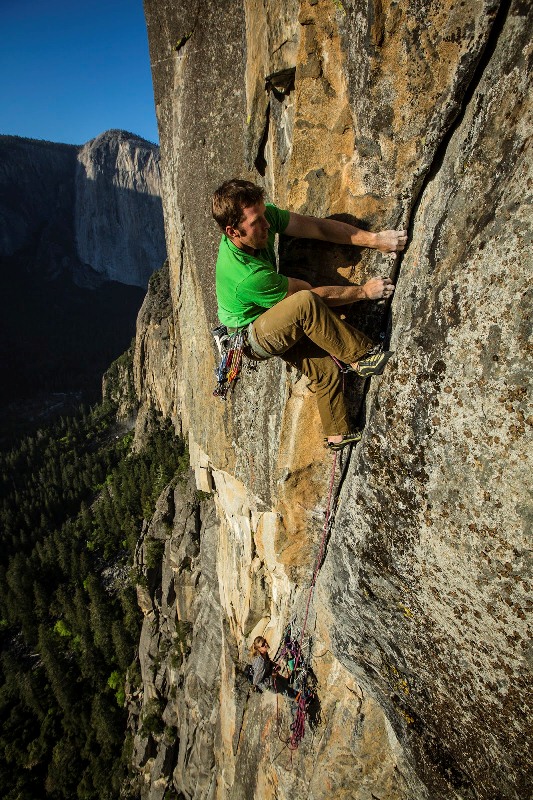 I screamed at the granite wall. The sound bounced off Yosemite’s Fifi Buttress and drowned into the roar of Bridalveil Falls. I lowered to the belay, where Katie stood at a small stance. I was six inches from a free ascent. It felt like six miles. I’d cleaned the route. Pulled out old gear. Placed bolts. Climbed on the pitches a ton. I’d trained hard. I stopped sleeping. Would the work ever pan out?

Dan McDevitt established The Final Frontier, a Grade V 5.7 A3 route in 1999 with Sue McDevitt, Brittany Griffith and Sue’s sister Penny Black. He climbed the route again with Jim Karn, the first American to win a World Cup in climbing and America’s best sport climber in the ’80s. While they were climbing, Jim Karn told Dan, “It’ll go free.” 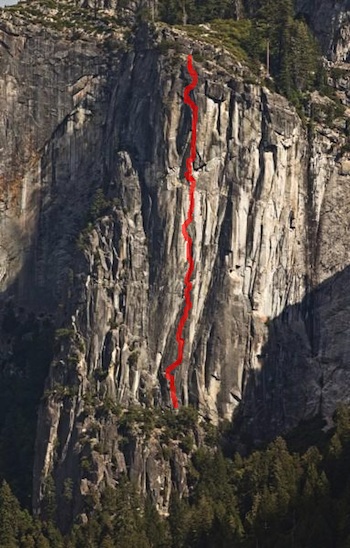 The Final Frontier on Fifi Buttress. Photos by James Lucas (unless otherwise noted)

Last spring, Lucho Rivera freed Dan McDevitt’s Romulan Warbird. I climbed a few times with him while he was working on the first free ascent of the 5.12 route. Gabe Mange, an El Portal climber, had ropes on the Final Frontier. Mange wanted to repeat The Final Frontier and worked his way up the route 200 feet left of Romulan Warbird, fixing lines as he went. One day, instead of climbing with Lucho, I jumared 600 feet up The Final Frontier. Dan mentioned Jim’s comment to me. The route looked like it would go but it would be a lot of work. 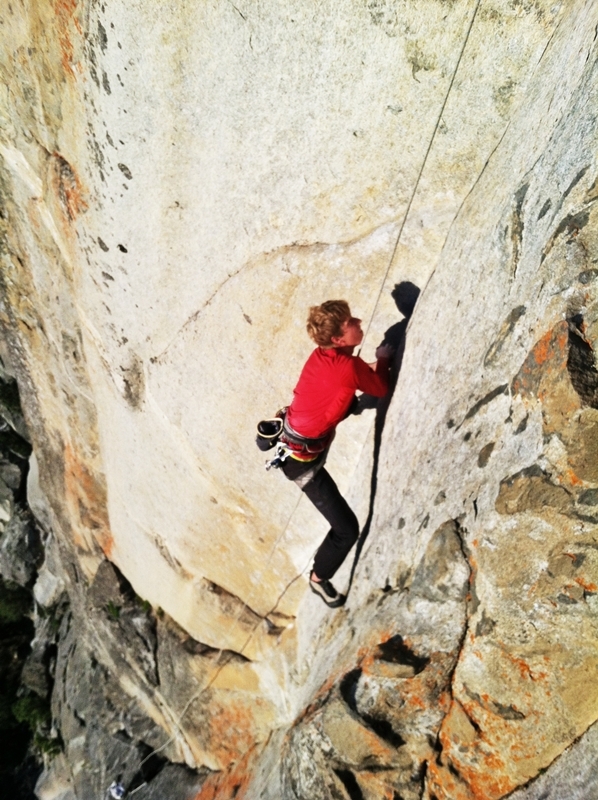 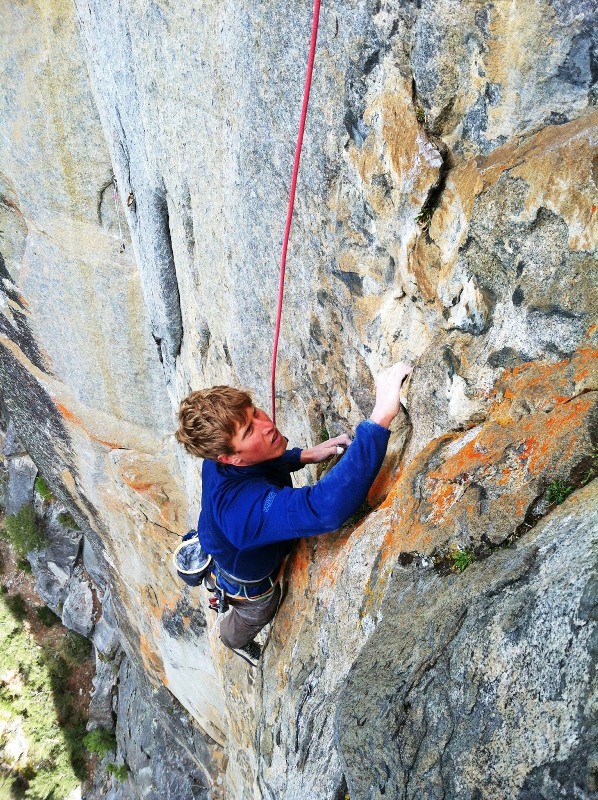 Nik finishes up the 5.13 traverse.

“This route was a savior and a gift for me,” Nik Berry said. In April, Nik and I started up the Dihedral Wall on El Capitan to scope a free ascent. After two pitches, I scanned my phone and realized the wall was closed for peregrines. We bailed. Remembering The Final Frontier, Nik and I hiked to Fifi Buttress. Gabe’s lines still hung off the 900-foot wall. We jumared the route and examined the free line. Nik had an immense amount of psyche from listening to Katy Perry all morning and a limited amount of time in Yosemite. “The next day, we started to put all our energy into this route with many hours of cleaning moss, weeds and sticks out of cracks and edges,” Nik wrote in his account of the ascent. 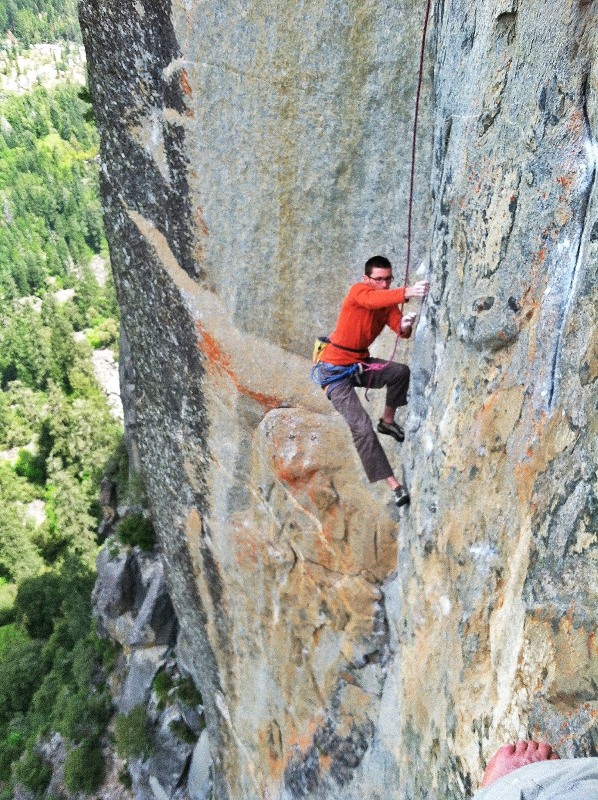 Eric Bissel executes the cross move on the 5.13 traverse pitch.

One of the first difficulties was connecting two thin crack systems. McDevitt had aided up a thin seam and then pendulumed across the face. Through the creative inspiration of Katy Perry’s “California Girls” bouncing across the granite walls, we found a series of technical smears and spanned the gap between the crack features. 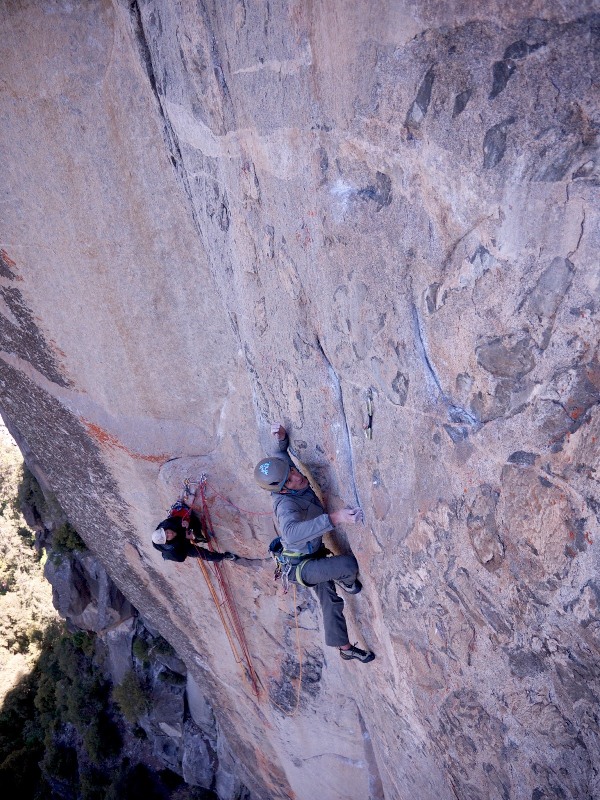 Mason Earle linking the crack systems on the 5.13 traverse.

“Within a few days, James and I had figured out where the free climbing should go, how to do the moves, and where the bolts should go. A week of bad weather came in and we were forced to boulder and climb at Jailhouse, which is always a nice change from Yosemite. This worked out well anyway since we needed to wait for our bolts to be delivered,” Nik wrote. 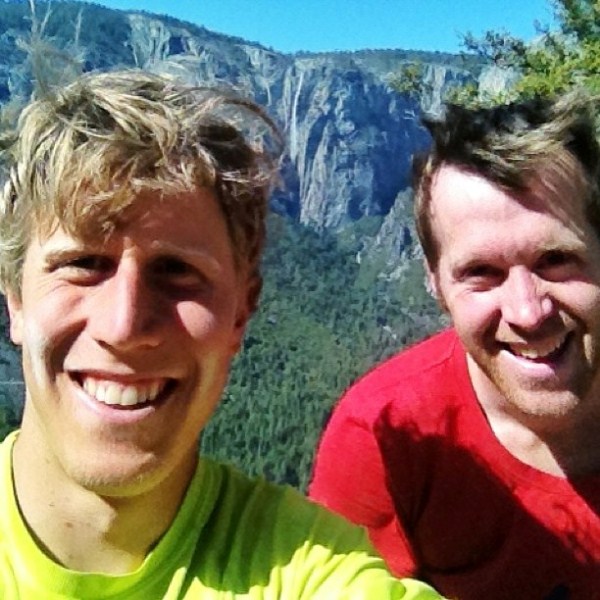 Nik and I on the summit. You can see Ribbon Falls behind us. Every day, we watched a rainbow form at the base of nearby Bridalveil Falls.

After getting all the bolts in, Nik went for the redpoint, leading all the pitches. While he rested at the belays, I tightened the bolts he had placed the day before. Nik freed the first corner and sent the traverse pitch. On the upper corner, he climbed the thin crack but fell at the boulder problem near the top. He tried again but fell. The boulder problem involves tenuous smearing on polished granite. He rested and I top-roped up to the boulder problem. I grabbed a loose hold that broke off and put a serious gash in my arm. We headed down to tend to my wound and Nik’s wounded ego. A few days later, Nik managed to redpoint all the pitches and I top-roped behind him. Being on the summit was fun – Nik sent! The route went free! A nagging feeling persisted as we descended. 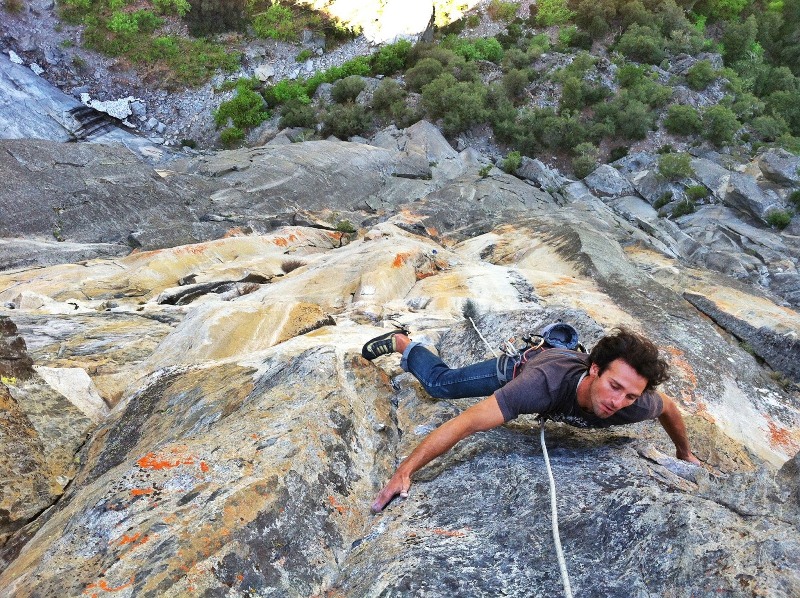 Bronson on the last 5.12 pitch. I removed a few heads, a pecker and pitons from this pitch and others on the route, replacing the fixed mank with bolts where necessary.

It was rad watching Nik send the route. He’s an exceptional climber and hard to keep up with. “After sending the final pitch, all the work and energy put into this route gave me an incredible feeling of accomplishment,” Nik said in his OR Blog. I knew what he meant but felt as though I was unfinished.

A topo of the route.

I returned to the route. I took down all of Gabe’s fixed lines and placed my own. I pulled all the heads and bad pins out. I added bolts where there had been bad fixed gear. I managed to send all the moves, then to send all the pitches. I climbed the route one day with Walker Emerson but I fell on the upper corner pitch. 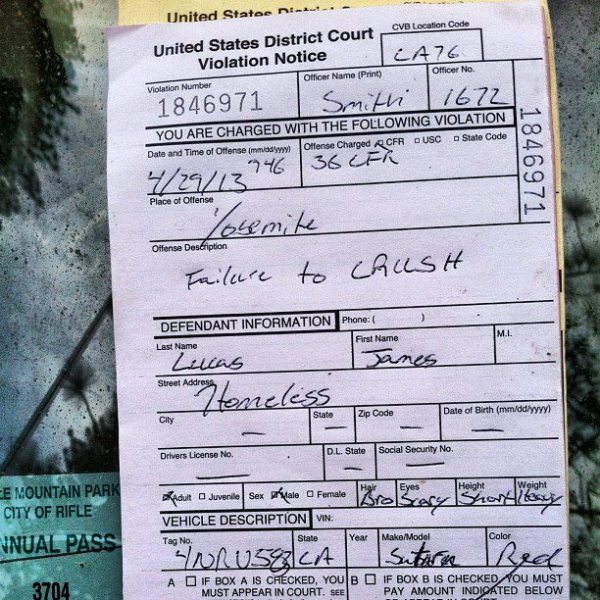 When I got to my car, I found this ticket on my dash courtesy of Officer Smith.

I worked the upper corner pitch again with my ranger friend, Aaron Smith. I drove to Tuolumne to sleep at 9,000 feet, hoping that the increased altitude would boost my red blood cell count and make the climbing easier. 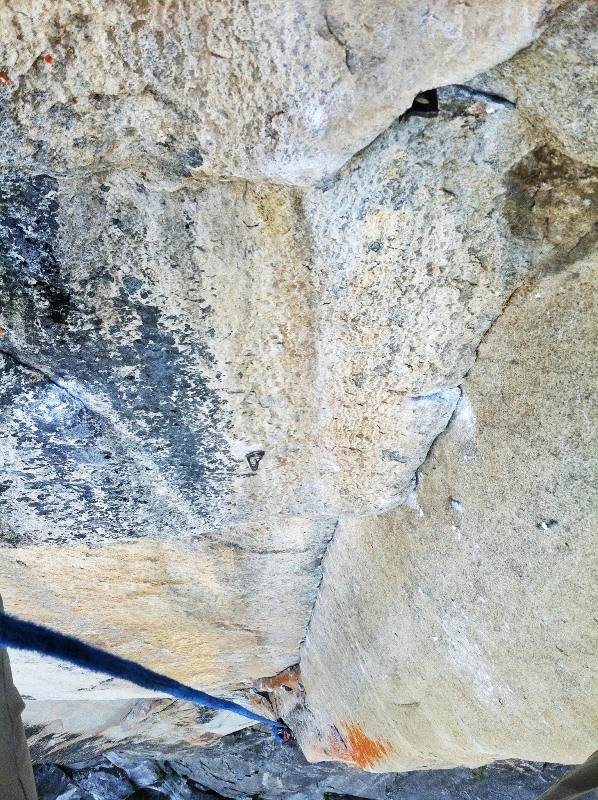 Delicate smears and a difficult boulder problem cap the pumpy corner. This proved to be the crux of the route.

“You just have to let yourself do it,” Katie said as I rested at the belay below the corner. After a long bit of pouting, wondering if The Final Frontier would be another mega project left undone, I started climbing back up the finger tips corner. I reached the boulder problem and casually grabbed the crimp and threw to the jug hold. 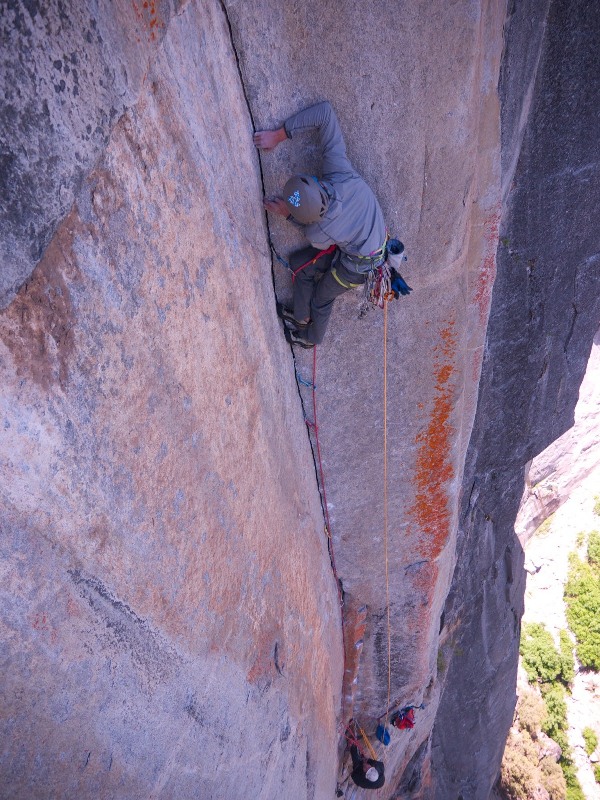 Mason flashing the crux pitch. Mason made the 3rd ascent of the route. Tobias Wolf made the 4th. Katie Lambert and Ben Ditto returned to try the route and Will Stanhope and Brad Gobright climbed on it as well.

The next pitch, which I had rehearsed well, went smoothly. On the second to last arch pitch, I floundered a bit trying to get off the belay. The moves felt hard. I felt tired. After a fall, I returned to the belay and then climbed to the top of the pitch. Katie followed solidly, climbing the entire route with no falls.

At the summit, I was psyched. I beamed as Katie climbed the top. I sent every pitch, leading the entire route in a day. It was the hardest climb I’d ever done. I’d had an amazing experience establishing the route with Nik and then climbing on it with other friends. It was really fun. I felt very proud of myself for investing so much into the route and I felt great about the successful ascent.

That night, the summit filled my dreams. I slept well. 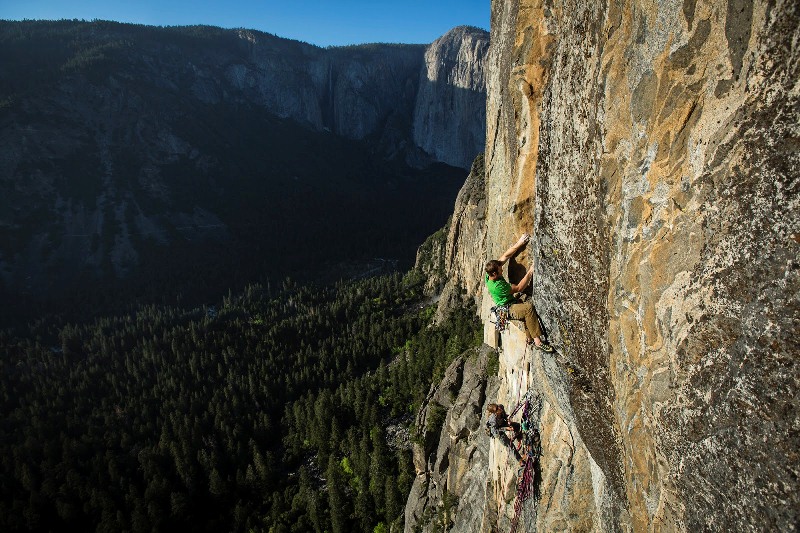 James Lucas climbs and writes out of his red Saturn wagon. This story first appeared on James’s blog, Life of a Walking Monkey.