Thanks to Patagonia Climbing Ambassador Zoe Hart for today’s post. A recent trip from her new home (Chamonix) to her old one (New Jersey) triggered some thoughts on the directions life’s paths take us. Her story originally appeared on the Dutch mountain travel site Bergwijzer. -Ed

I woke this morning to my husband, Max, lamenting the snow that was falling outside our window. I’m legally blind without my glasses, but even without them, I could see fuzzy white saucers of snow falling in our back yard. Falling, no actually accumulating on the hedges! It’s supposed to be June, spring, birds, our garden growing, limestone climbing in the sun, sunny granite cracks up high. 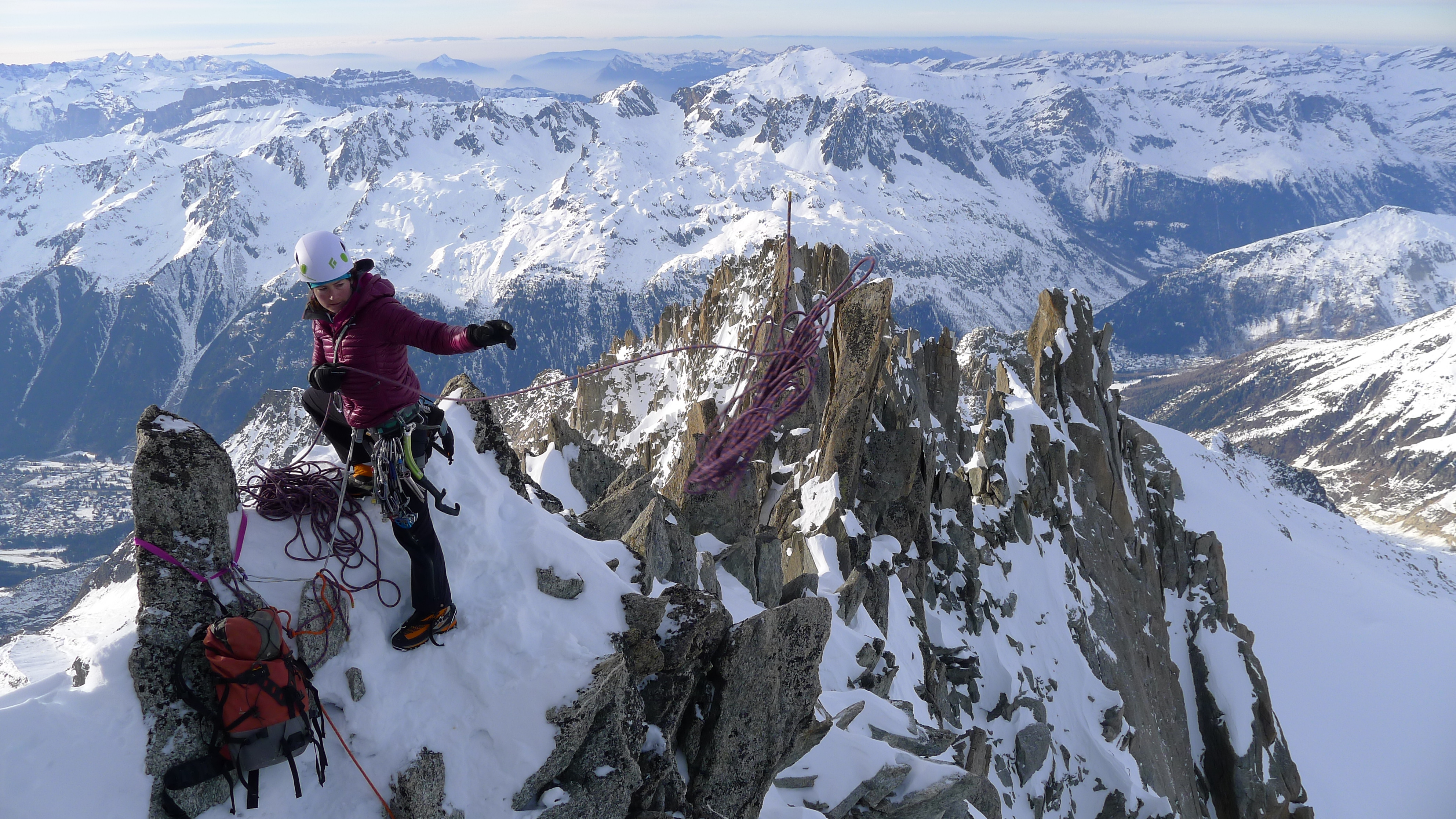 [Topping out on a mixed route on Pointe Farrar, a day out in my backyard. Photo: Maxime Turgeon]

Spring is SUPPOSED to bring rain for the neatly lined rows of tomatoes, lettuces, carrots that our eighty year-old neighbors meticulously plant, and care for, with the aid of a ski pole for balance. Spring is supposed to bring rain to nourish the little mountain flowers that grow besides the trails.  Flowers that will capture my eye for a moment on an approach to a big route, allowing me to forget the objectives that we are heading for and the nervous excited feeling of that twists in my belly.  Spring supposed to feed the wild berries that sprout in the bushes on the approach to limestone crags.  A sweet explosion of strawberries and raspberries plucked from the branches as we saunter to a crag.

What I’m realizing though, is that there’s no supposed to in nature, and that there are a lot of in-betweens in our lives.

Two weeks ago I went back to Princeton, New Jersey, eastern USA, to celebrate my High School’s 15th reunion with my classmates. It’s been a while since I’ve seen most of my peers, and I am far from fitting the mold of where I came from. Princeton, NJ, where I grew up, is a town, close to New York City. Many of my friends work in Finance, commute to the city, have a large house, a nice bank account, an expensive car, and a few kids.  I’m generalizing here, but it is fair to say that the majority of my friends live a much more conventional and traditional life than I do!

I was given the opportunity to give a slide show to share my adventures, to explain my life, my chosen path, and maybe on some level validate my “success.”  Over the nights of the reunions and the following week I spent days with my friends and their kids, visiting their lives a bit. There was a part of me that yearned for that stability that they had, the paycheck, the husband who was home each night, the car that started. And I could see in their eyes that there was a part of them was dreaming of my life.

I wondered what was the difference between us and how I ended up “here.” The answer was really that I had chosen to accept the in-between. From the years living in my car and making less than a few thousand Euros a year, to today, where work comes and goes and there is never a sure paycheck to speak of. I chose to accept the in-between. As I look back on the path I don’t know that it was really a choice but rather that the in-between maybe chose me. The unknown, the adventure, the new, where it pushes your mind, your self, your confidence, what you learn. . . . It’s addictive.

My biggest fear in life is complacency, is stasis, is to not grow. But, in the in-between you grow without trying.

When I look around myself and see the friends that I have learned the most from, I realize there are many who are no longer here at least physically, who were tragically taken in mountain accidents. But I look to see that there was no in-between in their lives, they just were. They LIVED the in-between every day without questioning it but rather by finding something to fill the in-between.

My friend Jonny Copp – who was killed in China on an expedition and who filled his in-between by writing, by photography, by creating an the Adventure Film Festival, which I now run in Chamonix – lived the in-between with grace. Allison Kreutzen, who died this spring in an avalanche in California, was a friend that I met during one of my worst in-betweens, when I was lost and confused. She taught me how to fill the in-between with sparkles, smiles, laughs and adventures. One October, we would pack her van each weekend and I would meet her after her overnight, long-haul nursing shift. I drove and she slept a few hours curled up next to her dog, Dulce, to the desert where we would climb and climb and climb sandstone cracks in Indian Creek, Utah. At night we would dance to drums and guitars, with beers and burritos, until the next shift arrived and I drove her back to work. For her there was NO in-between. 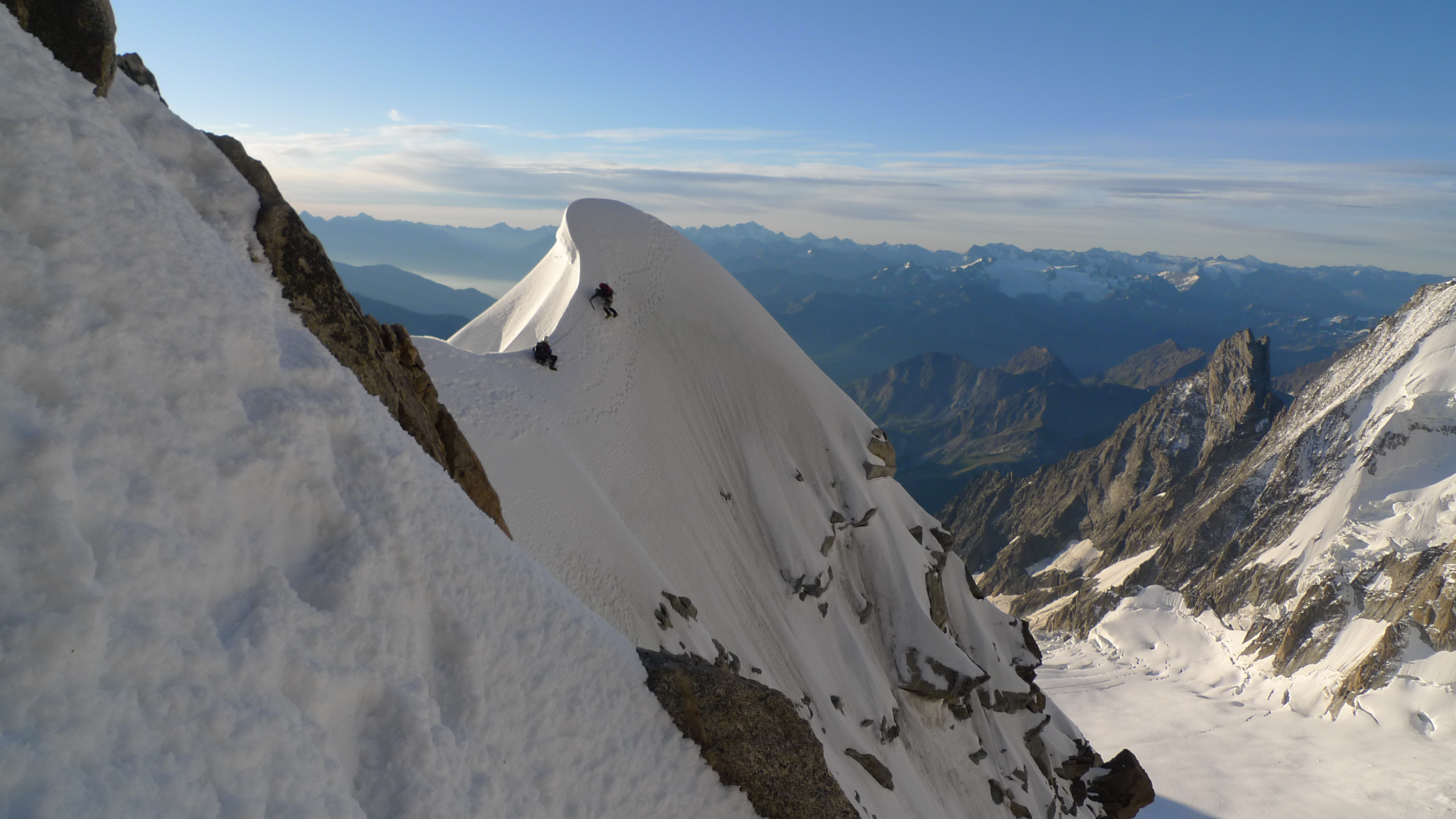 [A day at the office, other climbers follow our tracks on the exposed ridges of the Kuffner Arete on Mont Maudit. Photo: Zoe Hart]

I’ve found the in-between in the mountains as well. This winter, as we climbed the West Face of the Aiguille du Plan, the Gabbarou route, we anticipated and worried about the cruxes on the route, the steep headwall pitches. When the hard pitches were done with, and we arrived at the summit, we found out that the hardest part of the route would be the Midi-Plan Traverse, in reverse, having never done it before. What is supposed to be an easy classic route turned into an epic where we couldn’t find our way. We were forced off-route, into unprotectable climbing, in the cold night, having run out of water and food, and with far too little clothing to bivy. We lingered in the in-between for 12 hours as we kept trying and trying and trying and finally found our way back to the Aiguille du Midi Station 26 hours after we started. We found all of our bivy kit and food still waiting for us in the tunnel. 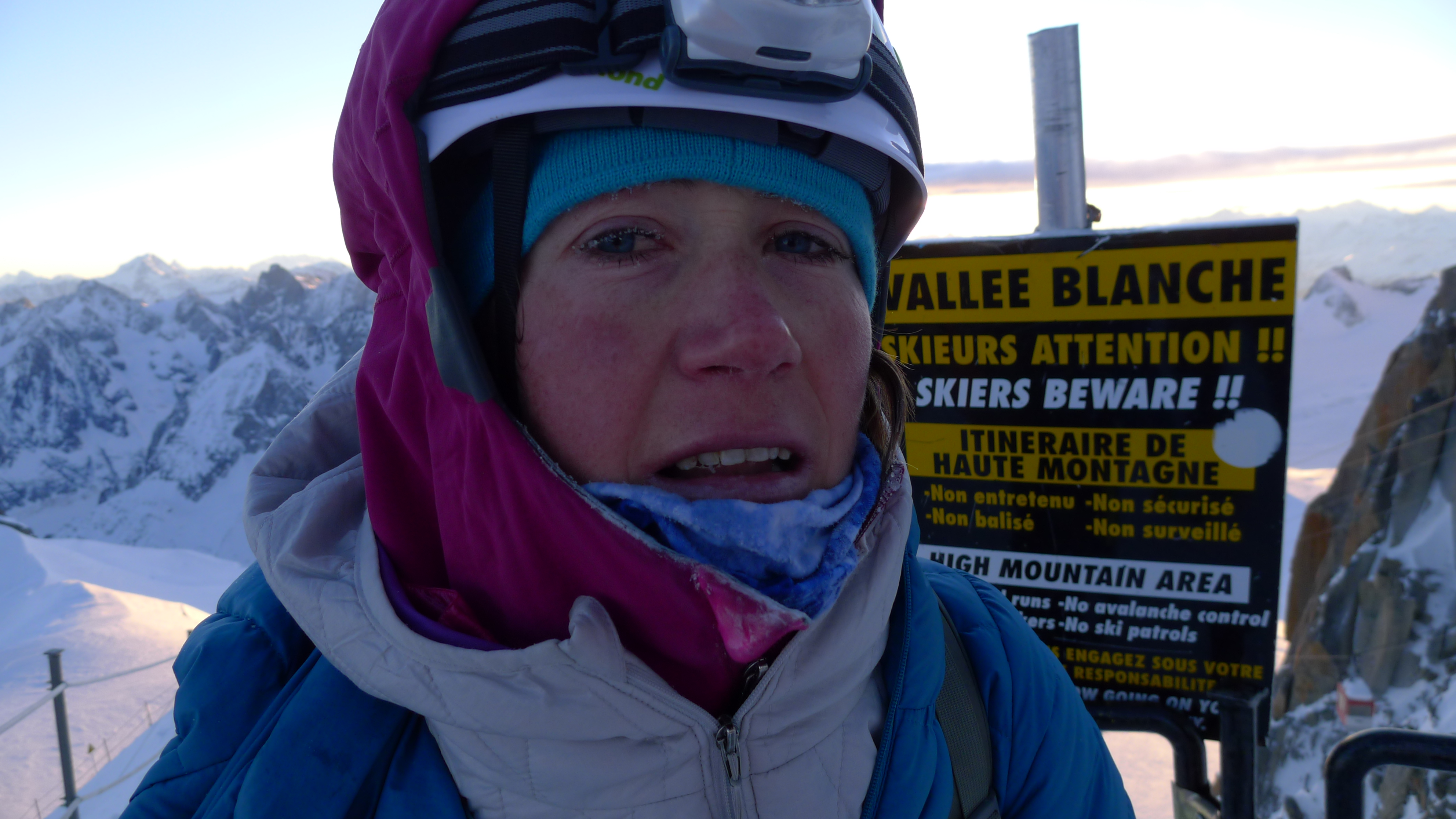 [Broken at the end of a 26-hour push through the in-between on the West Face of the Aguille du Plan. Photo: Maxime Turgeon]

So, as we traverse the in-between of spring to summer and then summer to fall and on and on, I encourage this: As you start this adventure to share your summer stories, embrace the in-between. An examiner once told me on a guiding exam, “It is your job to find reasons to go up, not excuses for why you should or can go down.” Whether you have a conventional job or a non-conventional life, we all have in-betweens, and what I’m realizing is that life is really about what happens in them.