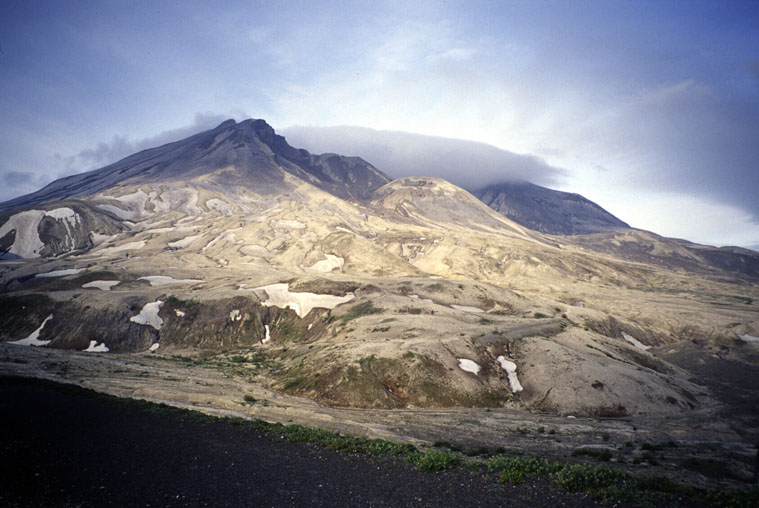 I remember the feeling more than the sound; a palpable ‘crack’ shattered through the bones of our house. At first we thought it was a car accident or maybe a gas explosion, but as we looked out the bay window to the north, we knew it was far worse… a mushroom cloud vigorously boiled up over the Portland skyline.

The youngest of the Cascade volcanoes, Mount St. Helens has always had the geological temperament of a teenage girl, marked by no less than four Current Era outbursts rivaling that which we experienced the morning of May 18, 32 years ago today. The peak’s personality played a prominent figure in Native American oral history. According to the Klickitats, she was caught in a love triangle with two brothers who destroyed villages and territory while vying for her attention. As punishment, the chief of the gods turned all three to stone: Adams to the north, Hood to the south, and Loowit, to the west, became Louwala-Clough—or smoking mountain.

But it was at 8:32 AM on May 18, 1980, when a 5.1 magnitude earthquake released a massive block of terra firma from her northern slopes over Spirit Lake and out the North Fork of the Toutle River. A pyroclastic blast quickly ensued, dumping inches to feet of ash and debris across the West and upper Midwest. After the dust settled, 200 plus square miles of National Forest was decimated, 57 people had lost their lives, and volcanoes became the diorama of choice the following year’s science fair.

Obscurely positioned (and now remarkably smaller) than her more prominent neighbors, Mount St. Helens sees a disproportionately lower number of visitors. While some ski, climb, or take snow machines up her southern slopes, most come to steal a peek into her crater from the Johnston Ridge Observatory to the north. But I’ve always been strangely intrigued by Loowit’s bipolar disposition—toggling between the lush and lunar, violent and placid. To embrace one without the other dismisses her personality.

I’ve since visited Mount St. Helens twice—both as a consolation prize to burn scraps of time spilled over from other junkets. Both times I opted to circumnavigate the peak’s 30(ish)-mile Loowit trail inside a day. Both have been richly rewarding experiences. On this 32nd anniversary, I recall my first visit, which remains one of my favorite adventures—ever.

Scott and I had just come off of the Sandy Headwall and Liberty Ridge. We had a slight change of plans, leaving us with an extra day on the backend. With a bit of fuel left in the tanks, we drove to the far corner of the Monument where we escaped the evening’s thunderstorm in the fuselage of our Ford Taurus station wagon.

“Pre-dawn” start passed to early-morning contemplation; we finally dug up enough enthusiasm to crawl out of the car and into the drizzle and slowly churned our legs clockwise up Windy Ridge. The Ridge sits at the northeast corner of the blast zone. To our right hid the crater, behind us the congested remains Spirit Lake. But we couldn’t tell; everything was shrouded in a blanket of soupy mist. At the Plains of Abraham, the mist lifted enough to appreciate the eerily well-demarcated blast zone. On the northern slopes, hills were pumiced—scrubbed clean of green—while the south was lush with mossy old growth. The line of life could almost be seen on individual trees.

As we circled south, the trail ducked under deep drifts of spring snow and circuitously around ridges, boulders and downed trees. Using the map as our codex, we threaded the route in 100m pitches between cairns and 10-foot poles positioned to mark the trail now obscured by the thick fog.

Five hours into our route we met our first (and only) party—a group of three skiers, donned head to toe in full-conditions backcountry regalia (we were dressed in trail shoes, running tights and wind jackets). We greeted each other with equal hesitation—from our own perspectives, the other appeared over or under dressed for the conditions. [Running across the Plains of Abraham. Photo: Steve Graepel] We parted ways and rounded towards the Toutle River, which drained west and off our map. The anxiety of reaching the halfway mark—knowing the efforts made earlier, but unsure of what lay ahead—while drifting into a deep void of snow and raging runoff sat heavily in our gut. We finally caught a trail that descended quickly away from the peak. Just as we started to second-guess our route, we saw a bridge spanning the torrent with a loamy trail snaking back towards the mountain and into the western edge of the blast zone.

The “zone” is a 10-mile swath of badlands that runs silently under the mountain’s yawning breach. It can only be described as Martian. Teaming with boulders precariously sitting amidst sandy washouts, we were the only sign of life in the volcano’s ground zero. The mist draped over us once again, eclipsing our bearing; we crouched to distinguish orderly cairns from the erratic choss.

Finally a fork in the trail marked the familiar Windy Ridge trailhead 4-miles away. We walked back to the car completely satisfied with the day’s effort. [Map of the author’s route.]In my years of adventuring, I’ve found that inflexibly hanging my hopes on a summit often leads to disappointment. But every once in awhile I’m reminded it’s not about the size of the objective or the grade of the route, but rather how I decide to spend my time and whom I spend it with. And while I’m not usually drawn to boisterous personalities, Mount St. Helens—in all her temperament—has delivered every time.