“What’s your New Year’s Resolution?” folks ask. They don’t really ask me, though, because I’m wary of holiday parties (depends on how much booze is there) and go, Huh? Is that like a “five-year plan” or whatever? I heard a person recently talking about how ten is the new five, or something – like now it’s a “ten-year plan.”

Easy there, chief, let’s not get carried away. I don’t know what I’m doing five days from now.

I also don’t generally like holiday gatherings, because they often seem fake. Everyone acts as if they like each other (I’ve been to a few where everyone actually did like each other, and was shocked… this ain’t Christmas!), which they show by buying each other needless things. Bah humbug.

So I resolve to avoid such gatherings – call me a go-getter. Maybe I’m grumpy since my endless hours of rehab, from my six recent surgeries, don’t have me back where I want to be. Unrealistic, perhaps. Probably. But I don’t just want the climbing. Hell, in terms of difficulty I’m not climbing much worse than I used to. No, I want that feeling back, that flow, the way it feels when I can move without restriction, without wincing, without worry or fear. Sometimes I still get glimpses. Not that I was ever satisfied with where I was – I always wanted to improve, and always wanted more of that feeling. And I’ll admit that I battle with the reality that I’ll never be as physically capable as I once was, and the question of what that means to me. Maybe I have to lower my standards. I can do that. If it will give me that feeling. 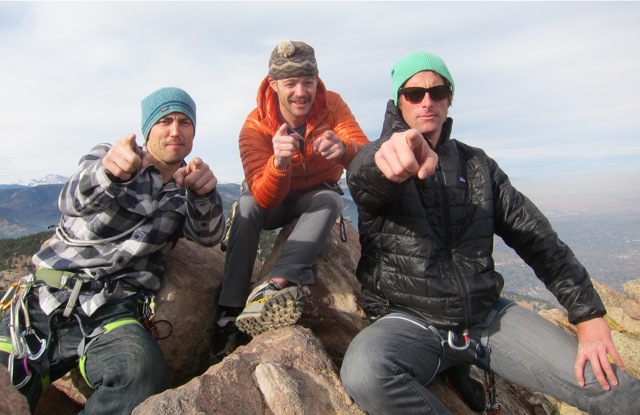 Regardless, I’ve never been much for outwardly stated goals.

Which reminds me of the last time I was at a holiday gathering – it was a dinner party with some folks I didn’t know. The usual small talk included “what do you do” (meaning, presumably, what do I do for work, as if one’s job should define their lives, but I digress – I know, we all do it and it’s a well-intended conversation starter). I said that I love to climb, read, write, get outside, and that I try to avoid spending on things that I don’t need, so that I can work as little as possible. It got me on a roll and I started saying how, for that matter, I never set goals because I don’t want to be disappointed if I don’t achieve them.

Suddenly I noticed a woman staring at me with an aghast look. I kept slicing veggies, barely missing my hand in an unfortunate knife-slid-off-the-squash incident. (Crisis narrowly averted.)

Her: “I like to think positively, and goals are a great way to get going in the right direction!”
Me: “I like to be realistic, and being too optimistic pretty much assures failure. I’m all about enabling success through lowering expectations. So, what could be better than low goals? Thaaaat’s right: No goals.” (Me: Expecting laughter. The room: None. Slight nervous chuckle from random corners.)

“I’m a motivational speaker and a life coach!” she replied, bubbling with annoying optimism.

“Oh. Great!” I said, and offered my help in preparing her speeches, before realizing, once again, that I was only making an awkward situation worse. But not before mentioning that my friend CF Scariot could really use some coaching, and offering to dig up his number.

Disclaimer: Don’t get me wrong, if someone wanted to pay me to tell them how to get their shit together, I’d be on that like white on rice. An obviously absurd notion, but still.

So, back on track (self-improvement goal #374: stay on topic): gatherings, margaritas, goals. The turning of the year is supposedly a time of reflection, and to commit to changes for the coming annum. Hence “New Year’s Resolutions,” which I also hate (Happy Holidays, everyone!), because I figure if it was something truly worth doing, then some arbitrary date isn’t going to make you magically muster motivation you inherently lack. Bummer, that. Nope, if it were important you’d do it as soon as possible from the idea’s inception, January-one-be-damned. Maybe I’m wrong. I often am, but that never stops me (see, I’m motivated). I hope it works for the folks who do it.

But let’s be realistic. Extensive scientific research has shown that most people who set New Year’s Resolutions fail to achieve them anyway. See? Set no goals, and disappointment you shan’t know.

So this year, I’m looking on the bright side: while staying committed to my ongoing rehab, I resolve to make no resolutions. Besides, you can’t set a goal for something as fleeting as a feeling. 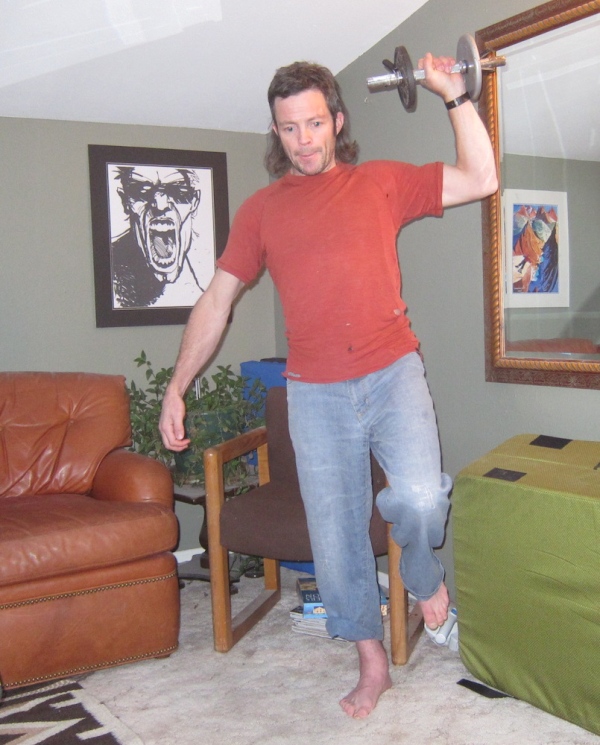 Ambition embodied: rotator cuff strengthening, cankle proprioception and a beautiful mullet, all at the same time.