In a remote mountainous region of northern British Columbia lies the Sacred Headwaters, the shared birthplace of three of British Columbia’s most important salmon rivers, the Stikine, Skeena and Nass. It supports one of the largest predator-prey ecosystems in North America, and it is the traditional territory of the Tahltan First Nation. Largely unprotected, numerous proposed mining developments now threaten the water, wildlife and culture of this land.

The largest proposed development is Shell’s coal bed methane (CBM) project. In its tenure of nearly a million acres in the heart of the Sacred Headwaters, Shell would extract methane gas using the water-intensive fracking process, which would risk contaminating and altering the water levels in the headwaters. A maze of roads and pipelines would connect the wellheads, fracturing the now pristine wildlife habitat. 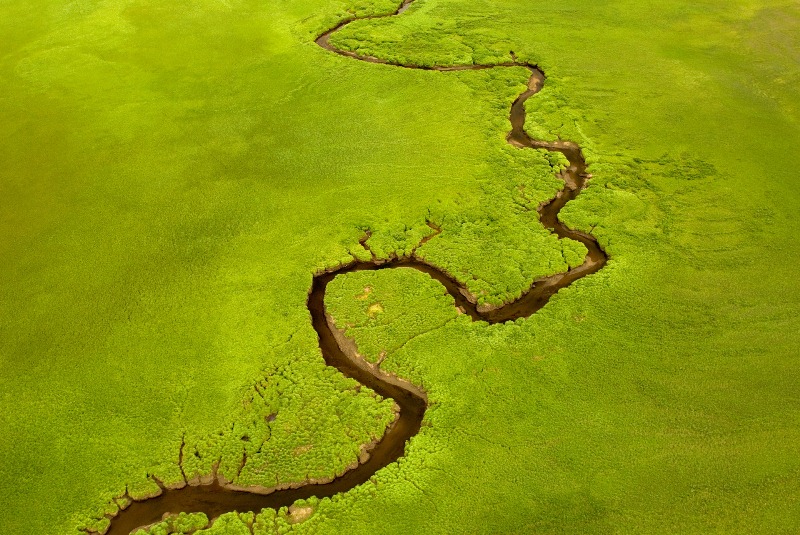 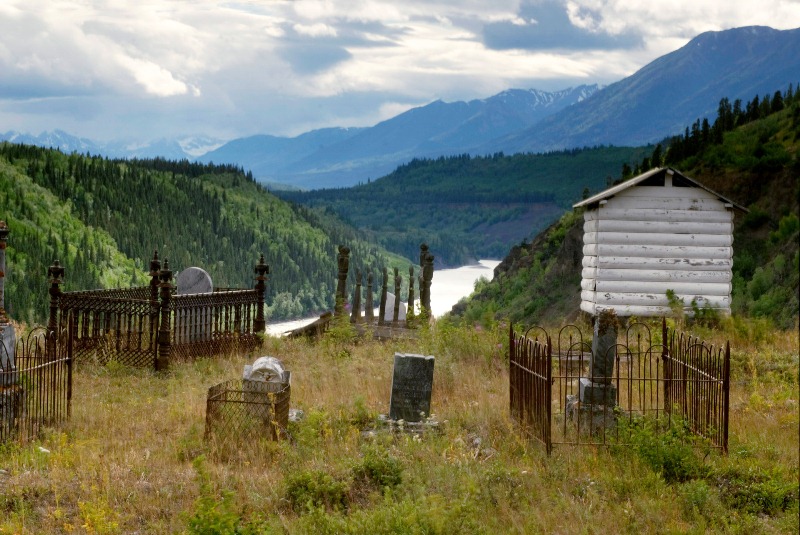 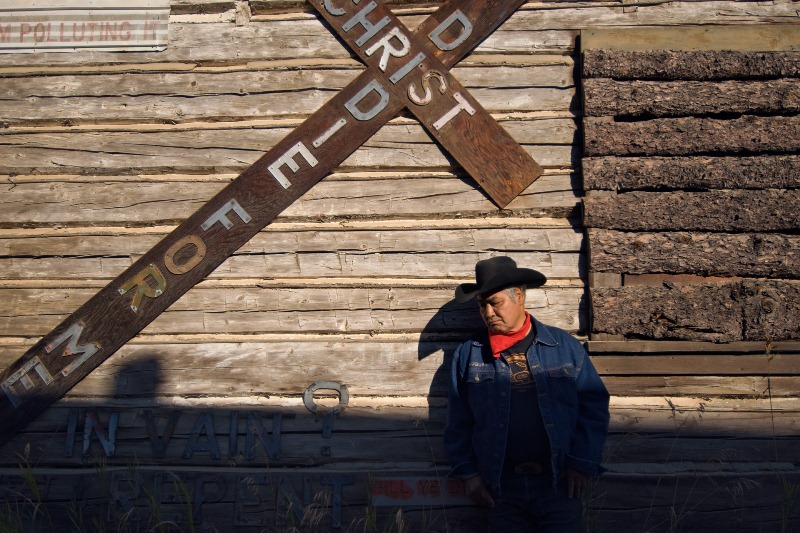 Incredibly, a small group of Tahltan elders succeeded in halting Shell – the world’s second largest corporation – in its CBM efforts. The elders’ protests, which included roadblocks that ended in their arrest, convinced the BC government to impose a temporary moratorium on the CBM project. But the fate of the Tahltan’s homeland hangs in the balance as the moratorium expires in December 2012.

Less than 20 miles from Shell’s CBM tenure, an open-pit gold and copper mine is proposed for Todagin Mountain, home to what is thought to be the largest lambing herd of Stone’s sheep in the world. A “wildlife sanctuary in the sky,” Todagin is the only home the herd has known and, until now, has been a refuge from encroaching industrial developments. Recognizing the value of the herd, the BC government protected the herd’s winter range via the creation of the Todagin South Slope Provincial Park in 2001. In 2010, however, it issued drilling permits for nearly the entire plateau, encompassing the herd’s spring, summer and fall ranges. If this tenure is mined, the herd could lose the majority of its habitat and be forced from the plateau. 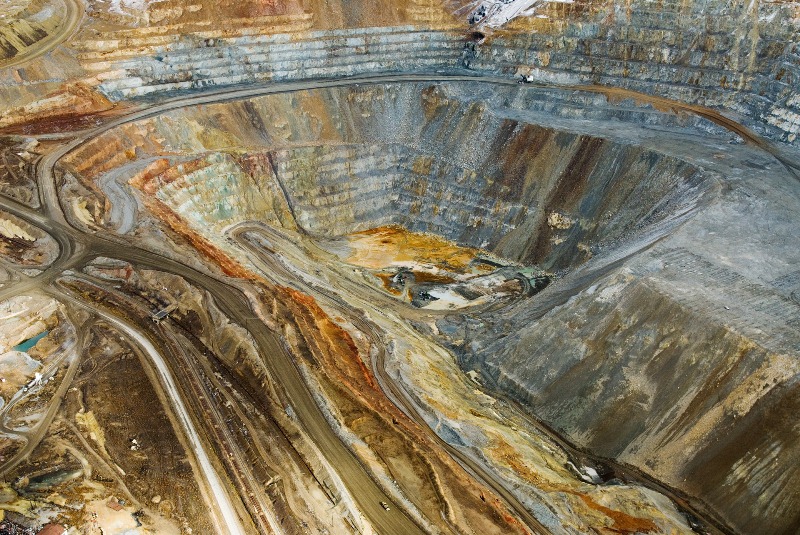 An example of what open-pit copper mining can do to a landscape. Montana. Photo: Paul Colangelo

My work in the area continues with a project focusing on the Stone’s sheep of Todagin Mountain. Last summer I was dropped off by helicopter to live with the herd for three months. My goals were to photograph the story of the herd and its threatened habitat, and to use specialized camera equipment to record the position of the herd as it moves across the plateau. The herd’s movements will be plotted onto a map of the mountain and overlaid with mining activity and tenures. This will make obvious, at a single glance, the land-use conflict threatening the herd. 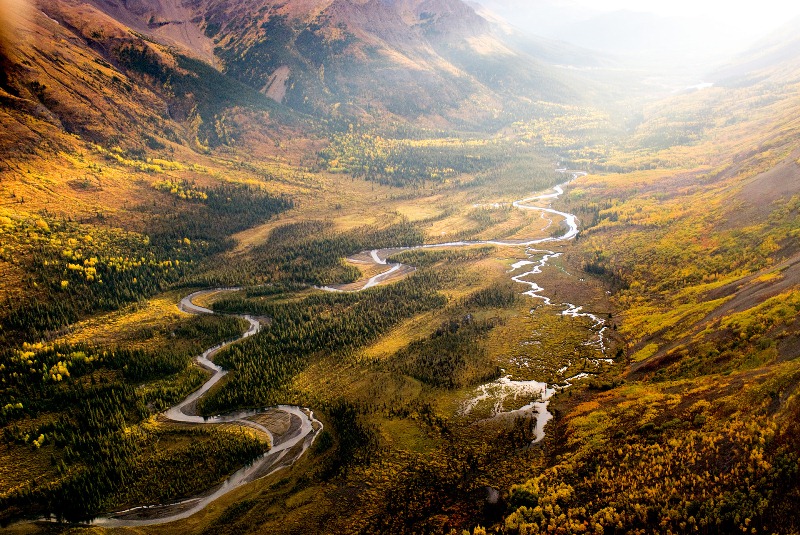 The greatest challenge of camping isolated on the plateau for months proved to be the weather. The open plateau is known for its high winds, but last year the region had its worst weather in 50 years. When the first storm tore across the plateau, it destroyed camp, ripping apart tents and depositing gear a mile down a valley. After repairing gear and re-establishing camp, a second storm hit, which was strong enough to fell trees 3,000 feet below me, and I had to be evacuated. Along with hopes of better weather, I will return this year to finish photographing the herd through to its rutting season in November.

Please support the protection of the Sacred Headwaters by visiting www.sacredheadwatersjourney.com where you can sign a petition and support the campaign, which becomes increasingly urgent with the moratorium on the coal bed methane development expiring this year and development ramping up on Todagin. 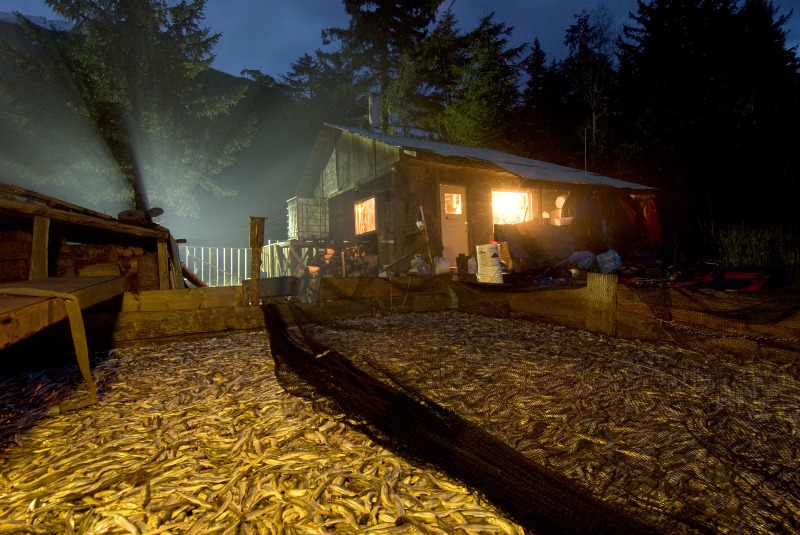 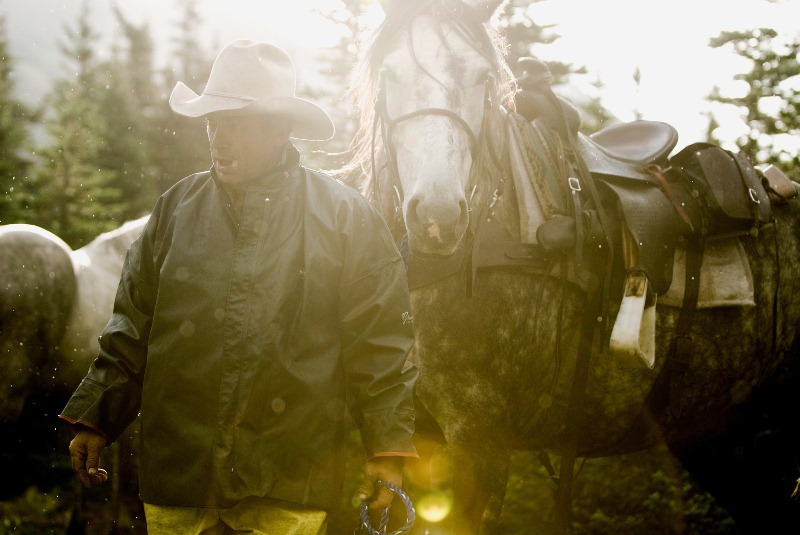 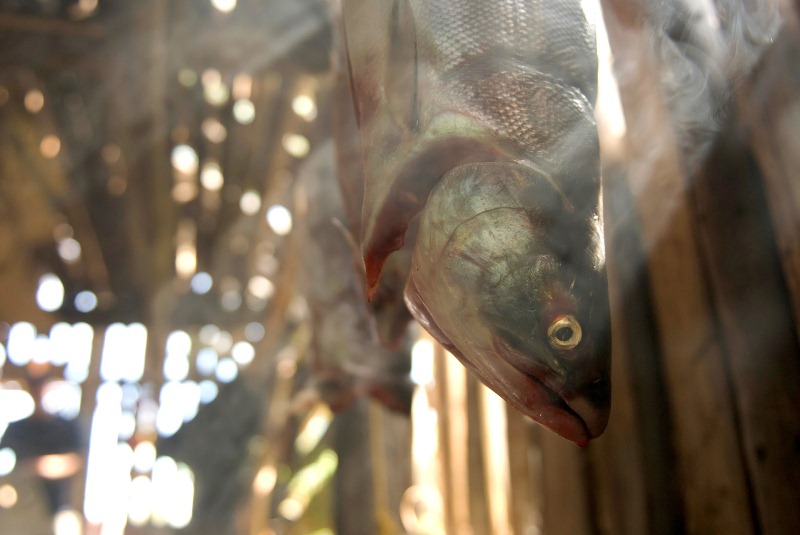 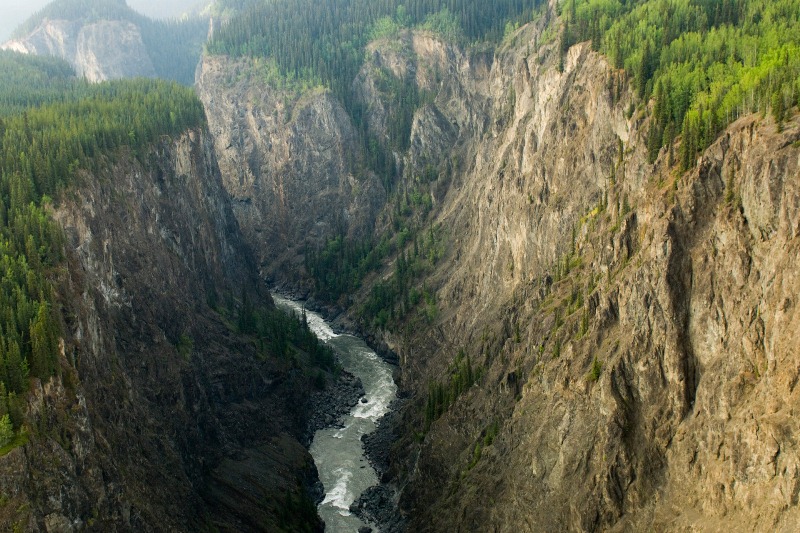 The Stikine River flows in the Grand Canyon of the Stikine, Stikine Plateau, British Columbia. 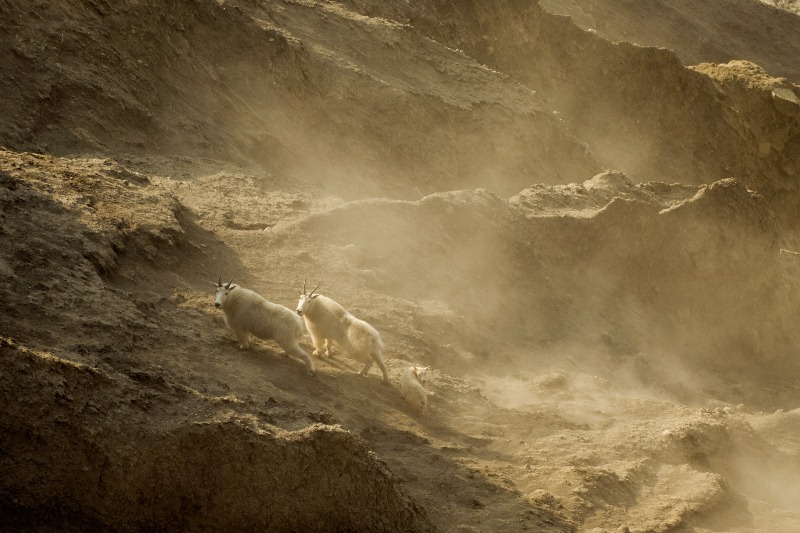 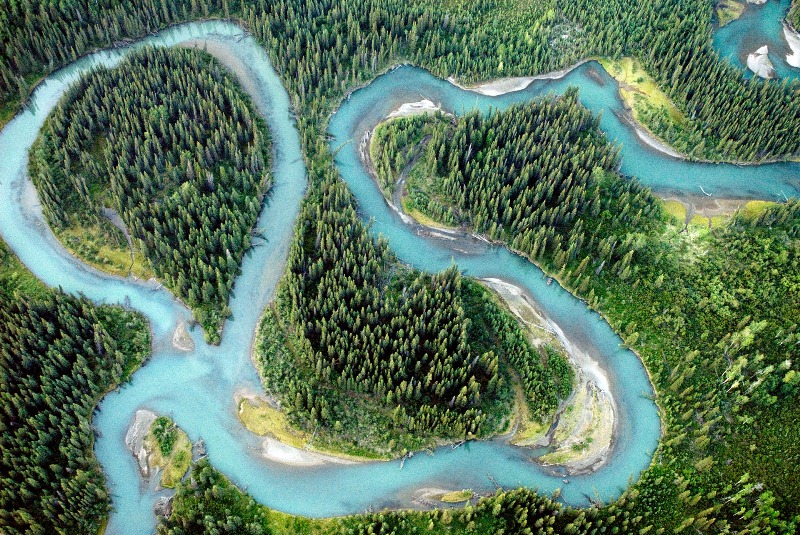 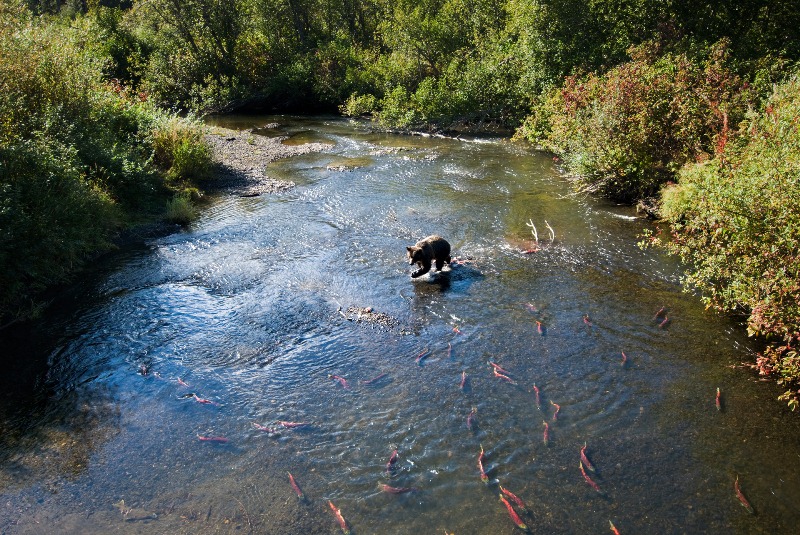 A grizzly bear chases salmon in a tributary of the Nass River, British Columbia. 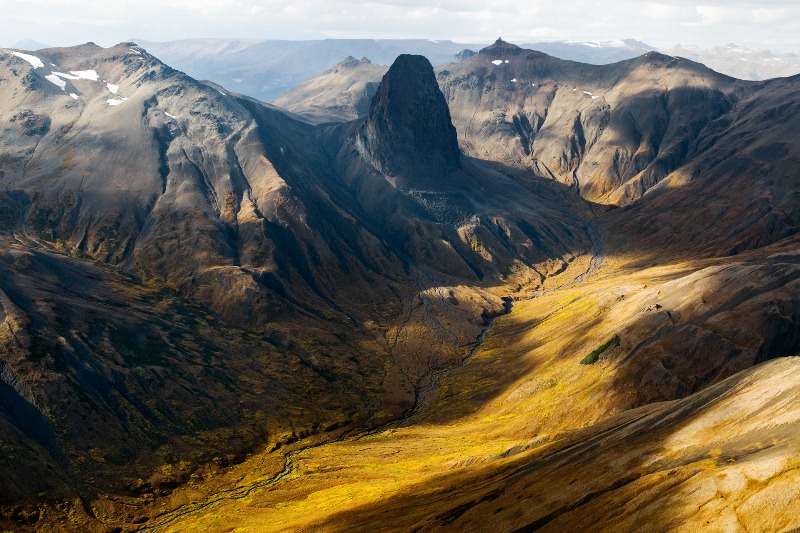 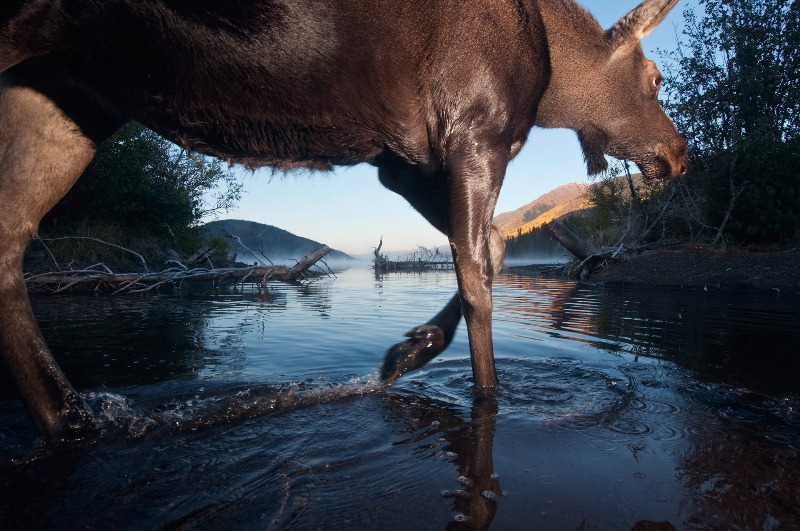 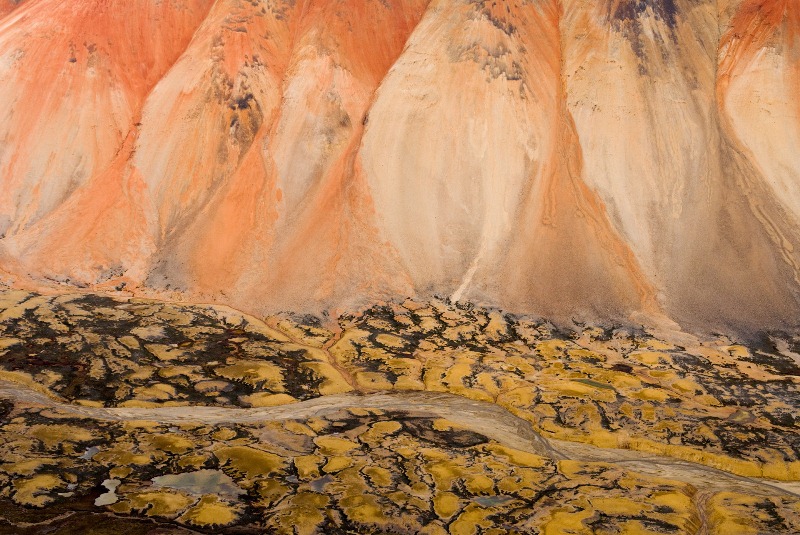 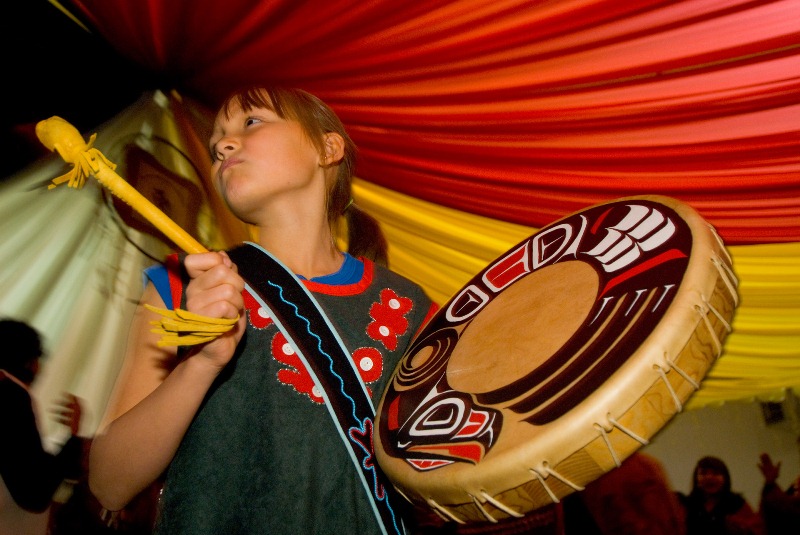 A young Tahltan girl beats a drum during celebrations of the 100th anniversary of the Tahltan Declaration, Telegraph Creek, Tahltan Nation, British Columbia.

Paul Colangelo is a photographer specializing in wildlife, environmental issues and the crossroads of culture and our natural world.