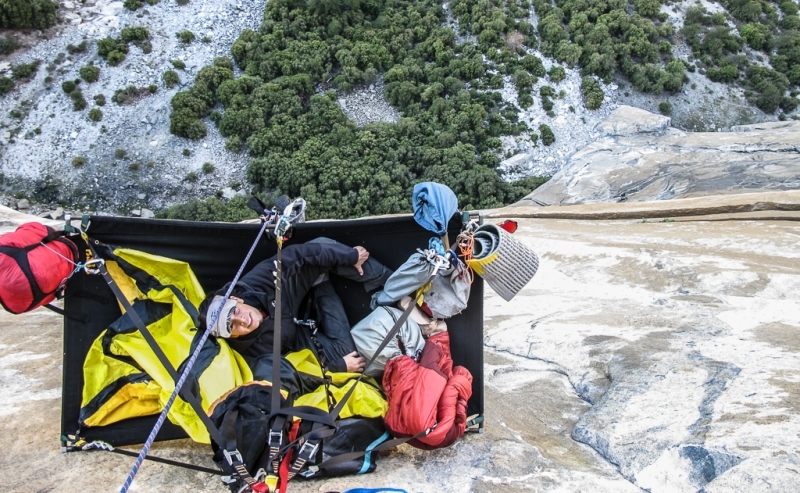 I anticipated the change with dread and excitement. My son was leaving the nest for college and I was determined to return to my former goal-driven climbing lifestyle. Fred Becky would be proud of me. After a night of mourning, alone under the desert stars, I promptly returned home, found my address book, and started calling all the girls I knew who might be interested in my next project.

I had become fixated on Tangerine Trip, VI A2 or C3F, on El Cap for a number of reasons. Nothing compares to the nights spent sitting on a portaledge, hundreds of feet above the valley floor, where only a few have earned the position. There is nothing to do but eat dinner—a bagel with cream cheese and tuna, perhaps—and slip into the sleeping bag. I savor the brief escape from the concerns and busyness of the world, where silence is broken only by the whoops of joy from other souls perched high on the wall and swallows swoop through the air, enjoying themselves just as much as the climbers.

Even though aid climbing is out of vogue, I’ve found that leading hard aid pitches challenges me and scares me just as much as any other form of climbing. No, I’m not ready to live vicariously just yet.

But the slip into retirement started to feel inevitable as my phone calls were returned. A couple of girls were recovering from surgery, two more couldn’t fit it into their schedules, and another two didn’t feel qualified. My own work obligations were piling up and free time was disappearing. So when my friend, Karen Bockel, showed up at Red Rocks and agreed to climb The Trip as soon as I finished work, I didn’t look twice at the metal knee brace she was sporting. My old attitude—that I could get myself and my partner up anything—had taken hold of me once again.

Meanwhile, my son was going through challenges of his own at college. His life was turned upside down. I reminded him, “…we rejoice in our sufferings, knowing that suffering produces endurance, and endurance produces character…” It was easy for me to preach now that I had found a partner with whom I could accomplish my goal. 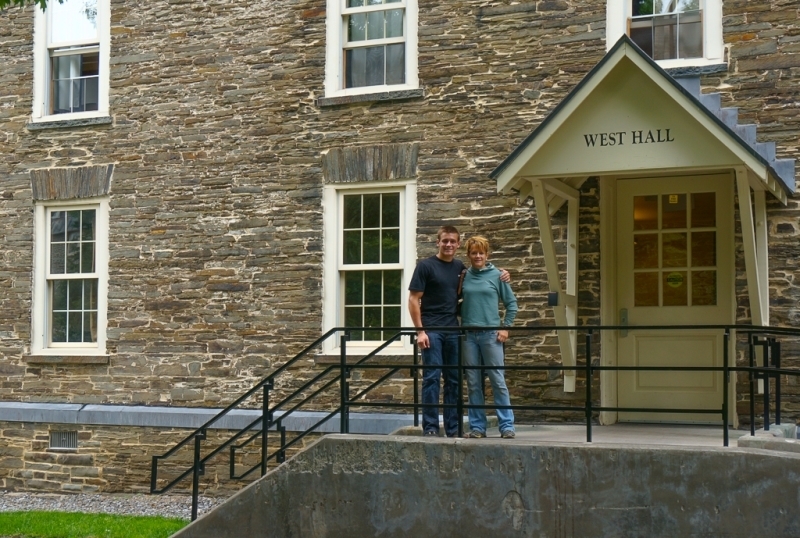 The beginning—sending my son away to college in New York. Photo: Kitty Calhoun Collection

Karen, a slim strawberry-blonde German, had come to the U.S. on a track scholarship and was getting her masters degree in Physics when she quit to become a professional bike racer, turned ski guide, turned Chicks with Picks guide. “Debockle,” as we affectionately called her, had climbed the Nose in two days and that was the extent of her aid climbing experience. So as we labored under 80-pound haul bags on our way up to the base of The Trip, I asked hesitantly, “Do you have any idea how you are going to clean the downward traverse on pitch 4? You know, someone was killed following that pitch when a piece pulled and he fell onto his ascenders, which failed.”

I waited in silence, not sure myself what the best course of action was. Many parties avoided that “death” pitch by doing a variation, but it was harder to lead and I felt marginally competent as it was.

“I have thought about it and have some ideas,” Karen replied with a reassuring smile. 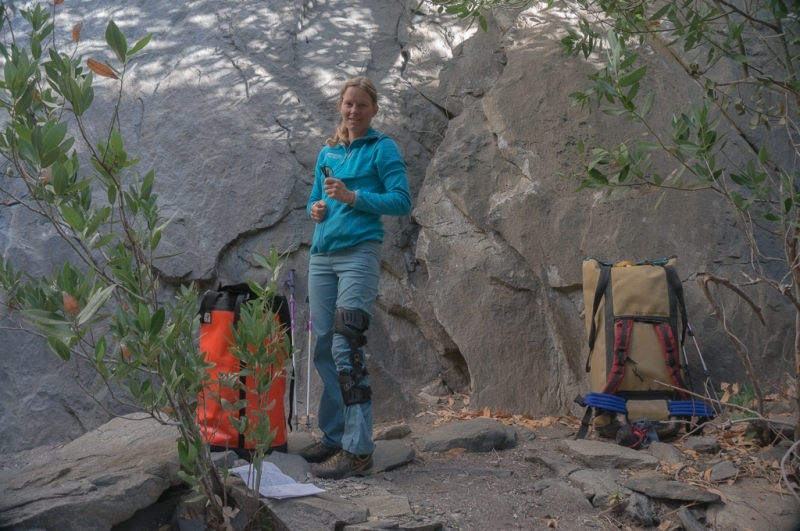 Karen preparing at the base of Tangerine Trip on Day 1. Photo: Kitty Calhoun

The next morning, as we carried up 16 gallons of water and prepared to ascend our fixed lines and lead two more pitches, including the “death” pitch, I noticed Karen moving gingerly.

“You okay?” I asked, perhaps having been blinded by personal ambition.

“We should fix pitches 3 and 4 and then see how I feel,” she replied with measured optimism. “Otherwise, I guess we are committed to another four days on the wall plus the descent, huh?”

“Yeah,” I said, not ready to face the possibility of defeat. The idea of procrastinating a decision like that sounded good to me.

Karen had her ACL and meniscus repaired about four months ago and had been free climbing without pain, but heavy loads and the repetitive motion of jugging had caused her knee to swell and ache. She now faced a universal question: Where is the balance between short-term goals and long-term injury? 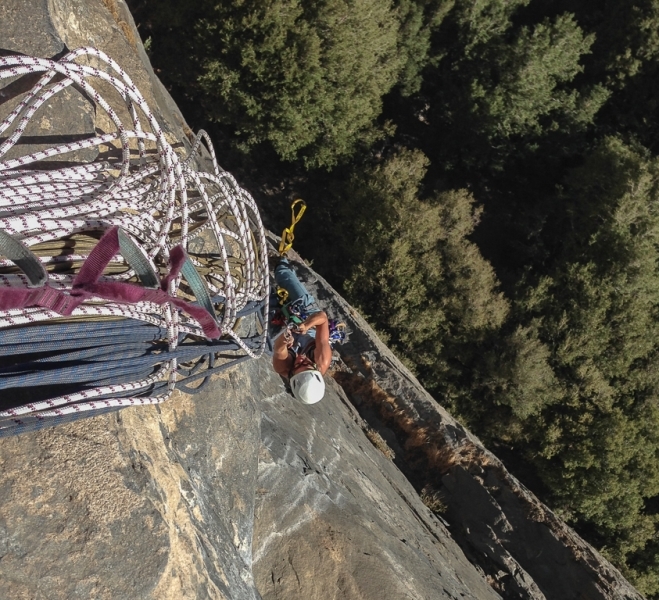 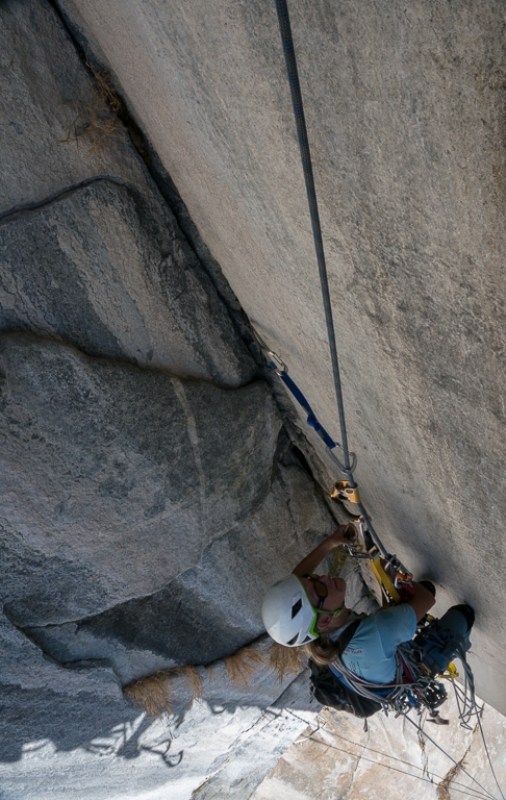 Karen climbs through the pain on pitch 3. Photo: Kitty Calhoun

I started up pitch 4. Not long after I left the belay and turned a corner, I was out of sight of Karen on a blank headwall split by a thin seam that led to the downward traverse under a roof. A rare rusty piton provided little solace as I realized the higher I climbed on increasingly nebulous gear, the more dangerous it would be to retreat if I couldn’t get in my next piece of gear. I was quickly getting in way over my head and no one could help me now. I gazed bewildered at a copperhead whose cable had completely busted off, and an old piton a body length above that.

I was warned that if I placed a beak over the head, the head could get levered out. A hook wasn’t deep enough to reach over the head. I did have a nut tool with me though. Holding my breath, I carefully placed the tool over the head, clipped my aider into the tool, eased my weight on it, and prayed the tool wouldn’t wobble off. A few seconds passed and I was still on the wall. I had not been catapulted into space. Gingerly, I clipped the rusty old piton and finished the pitch.

I watched with relief as Karen managed to clean the downward traverse. We had passed a critical test. The next day we could haul the rest of the gear we’d need to sustain ourselves for the next several days on the wall. We would be committed, but I knew we could complete the route. I could begin the next chapter of my life with the confidence gained from another El Cap route under my belt. 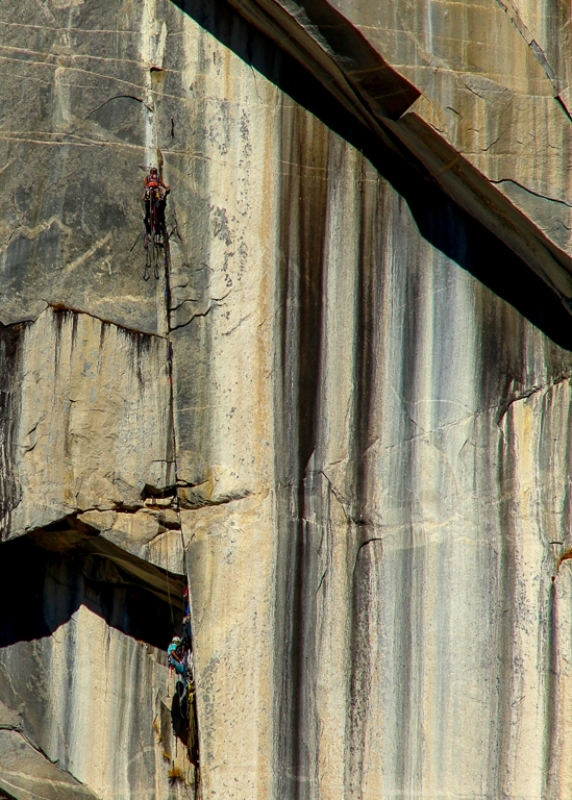 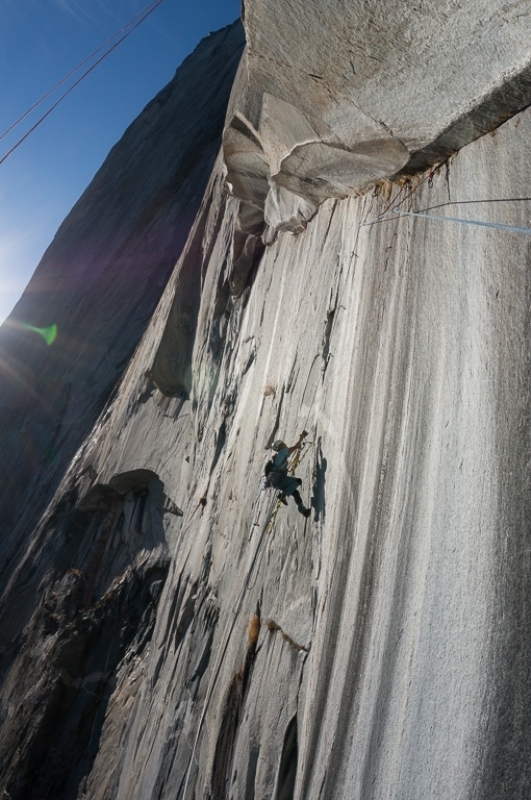 “What? You’re not sure you can finish the route?” I looked into Karen’s eyes, searching for signs of fear, uncertainty, remorse.

“Well, it’s your body, your decision,” I said. My mind was racing. I knew this was a decision with greater consequences for Karen. I didn’t want to be responsible. She was a highly successful professional athlete—just as determined, driven and focused as I was. I wasn’t even sure what I would do in her shoes.

I waited in silence.

“Kitty, I’m sorry I brought you into this. I honestly thought I could do the route. But the risk of screwing up the surgery is too great,” she said while trying to maintain a calm composure.

To my surprise, I blurted out, “Okay, will you promise to come back with me next spring?”

In my younger days, I would’ve been awash with anger and disappointment at having to bail. Maybe the years of suffering and enduring countless climbs and the joy of motherhood have changed me. I now respect and value my partner as much as my goal. 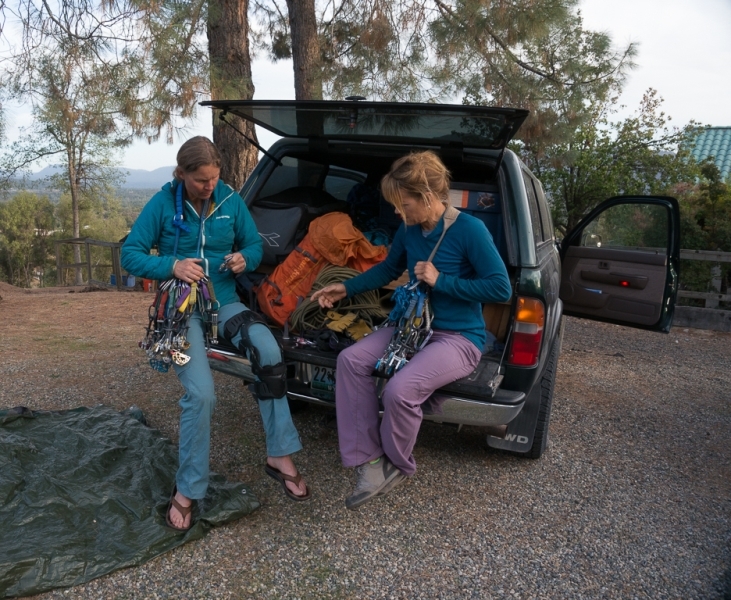 The Trip Continues, in part two of this story…