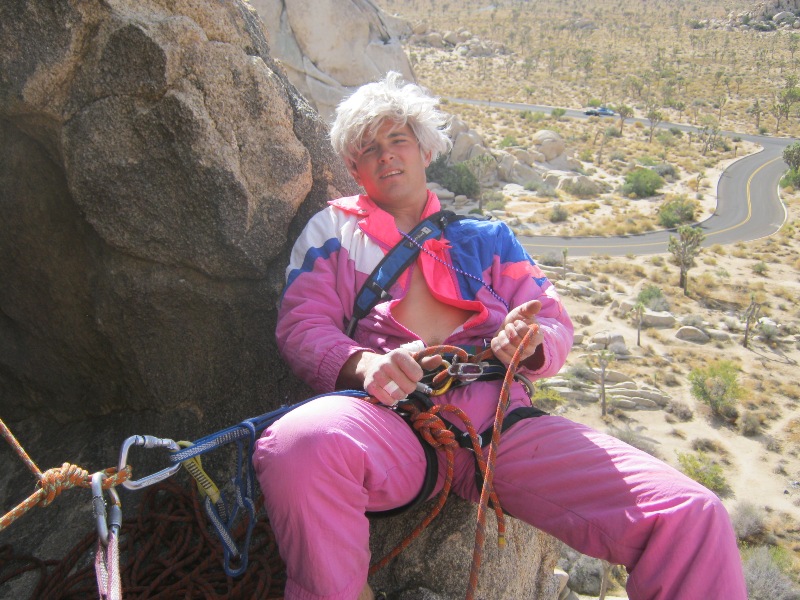 My dream job would be being an underwear model. A friend helped me figure this out one day after I’d just purchased some new undies, and we were looking at the models on the packaging.

“What a job that would be, wearing underwear for a living,” I said.

“You could do it,” Amber answered. “And since you’re a climber you could model for Patagonia.”

A quick check of the Patagonia catalog showed that they didn’t use the same advertising technique that we imagined; my visual image was Victoria Secret style for the female models. Still the dream was planted.

Winter, Salt Lake City, Utah, and I’m on a date with a girl I met at the local raw food restaurant. Her house: throwback, psychedelic, complete with record player, Polaroid camera, and a little fireplace we sat down and talked beside. She’s the intuitive type, the kind of girl who references her dreams often, and talks of love and living in harmony with the planet.

In her room later she’s showing me energy stones, and waxing poetic. For some reason I mention that I’m going to the Patagonia outlet store in the morning for a sale. Then she begins to tell me about a dream she had. The focus of the dream: me just wearing a fire-red pair of underwear. We kiss and then she sends me out into the cold night.

The next morning my friend Sara and I are up at the crack of dawn, waiting in line behind a hundred or so shoppers as the line pours out, winding around the store. Sara is a good friend, one I consider a sister, and to top that off she’s letting me couch surf at her house for the month.

Later, waiting in line to check out, we’re behind 150 or so people and there’s a box of underwear next to me. I tell Sara about the potential ladyfriend’s dream. She looks in and sees a fire-red pair, tosses it into my bag, and says, “Maybe you’ll get lucky.”

The following night, I’m taking off my clothes. Clear sky, the stars above and mountains blanketed in snow. Sara and I are at the Midway hot springs. The scene is strange; Lynyrd Skynyrd blasts out of a trailer truck. A fellow, who appears to be on some sort of crack, is doing flips in the 110-degree water. A fog emits from the spring and I can’t identify my surroundings other than the Skynyrd and the people in the water. It feels like the beginning of a horror movie.

The idea of kicking back in the hot springs doesn’t seem relaxing anymore. Still, there are hot springs to be soaked in. I strip down, almost all the way down to what else, my new red underwear. Was this the scene that my ladyfriend imagined? With the cover of my new underwear I then slipped into the heat and the weirdness of the hot springs.

I never got to hang out with the young psychedelic woman again, but I think of her every time I wear my red underwear. I feel like I would feel comfortable in them in many different situations, and after the odd hot springs experience being in front of a camera would be pretty chill. So Patagonia, if you have an opening for an underwear model, give me a call. 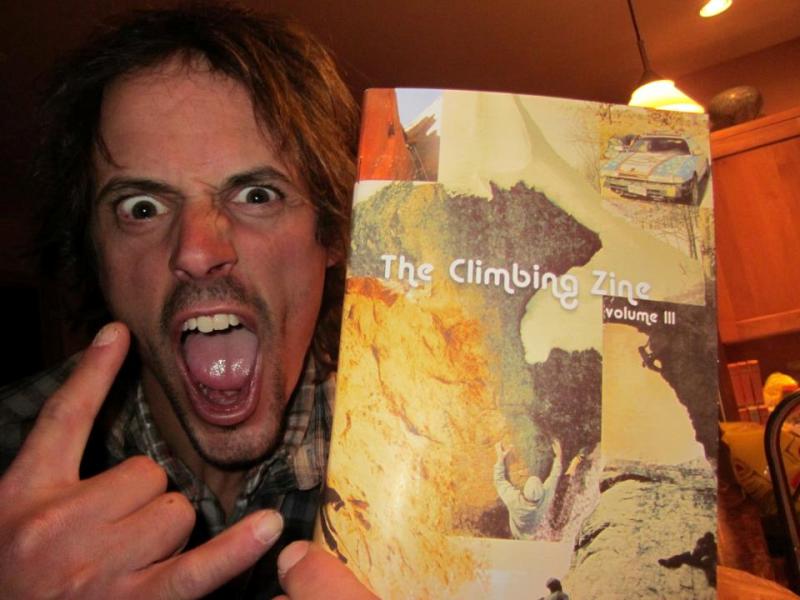 The Climbing Zine reader, Dave, gets pumped on Volume 3. Details for getting your own copy of Luke’s self-published mag are on the sidebar of his blog. Photo: Luke Mehall

Update 2/9/12: The Climbing Zine is now available for Kindle through Amazon.com.

Up for a little sale adventure of your own? Patagonia.com and Patagonia Retail Stores are having a 30% Off Sale for U.S. residents, now through January 30, 2012.

Luke Mehall lives in Durango, Colorado. He is the publisher of The Climbing Zine, an independent print publication and website, and he is the author of American Climber, Graduating From College Me, The Great American Dirtbags and Climbing Out of Bed. He has been published in Alpinist, Rock and Ice and Patagonia’s blog, “The Cleanest Line.” He has also appeared on the The Enormocast and The Dirtbag Diaries podcasts. In 2017, his mustache was named the best of Indian Creek.