Rolo and a handful of stoked Patagonia ambassadors and friends will be sharing images and stories of their adventures throughout the Patagonia climbing season. Follow along at patagonia.com/vidapatagonia. If you’re planning to make a climbing trip to the area, tag your photos with #VidaPatagonia to appear on the page. 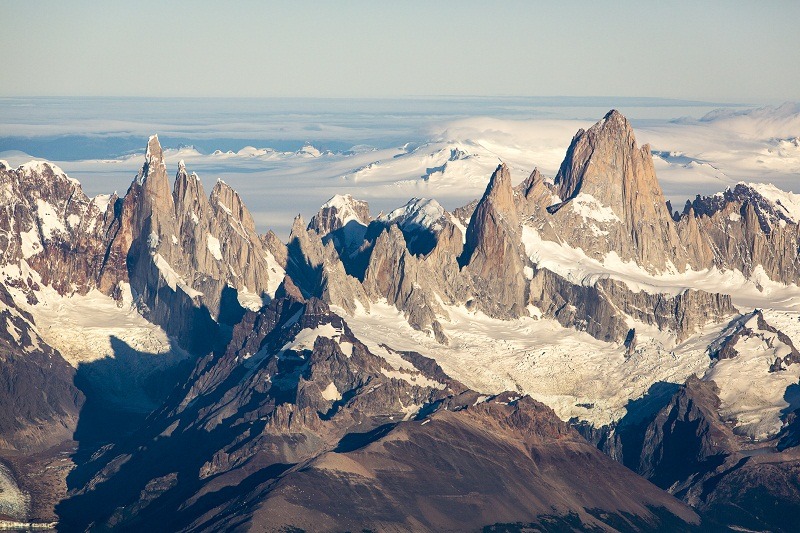 The peaks of the Chaltén Massif are some of the most iconic in the world: jagged spires that shoot toward the sky. They offer everything a climber could desire, from excellent quality granite to uniquely wild rime formations. All this is set in a dramatic environment, with the endless Patagonian steppe to the east and the broad expanse of the Ice Cap, an enormous network of glaciers that drops into Pacific Ocean fjords, to the west.

The weather in the massif is notoriously challenging and short-tempered, receiving the wrath of the “Roaring Forties,” strong westerly winds that sweep across the southern Pacific. While the region’s fierce reputation deters many, others find it inspiring. During the southern hemisphere summer, climbers from all over the globe convene in El Chaltén for a dose of some of the most fantastic, most intense and most fun alpine climbing on the planet.

This year marks the 100th anniversary of the first mountaineering expedition to the area, when Alfred Kölliker and partners explored the southern reaches of the massif and crossed the Ice Cap to reach the continental divide. Much has changed since.

In the late 1980s, the Argentine government established the town of El Chaltén, building bridges, paved roads, services and infrastructure. It was a geopolitical move, an effort to help secure a section of disputed border with Chile, but to the credit of the planning officials, the development took place at the edge of the National Park, leaving the mountain area largely free of infrastructure.

Although El Chaltén’s presence can make for a tamer Patagonian experience, the beauty of the peaks, the quality of the rock and the ferocity of the storms have not changed and climbers are just as able to have real adventures that build lasting memories. 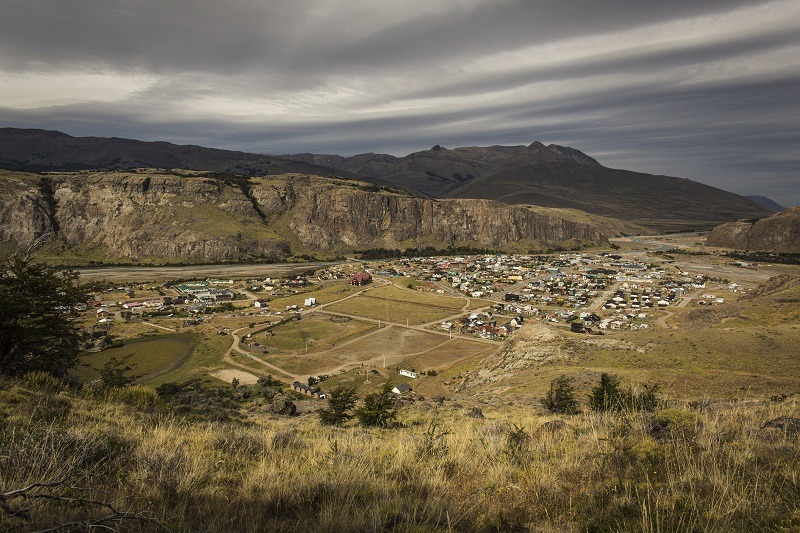 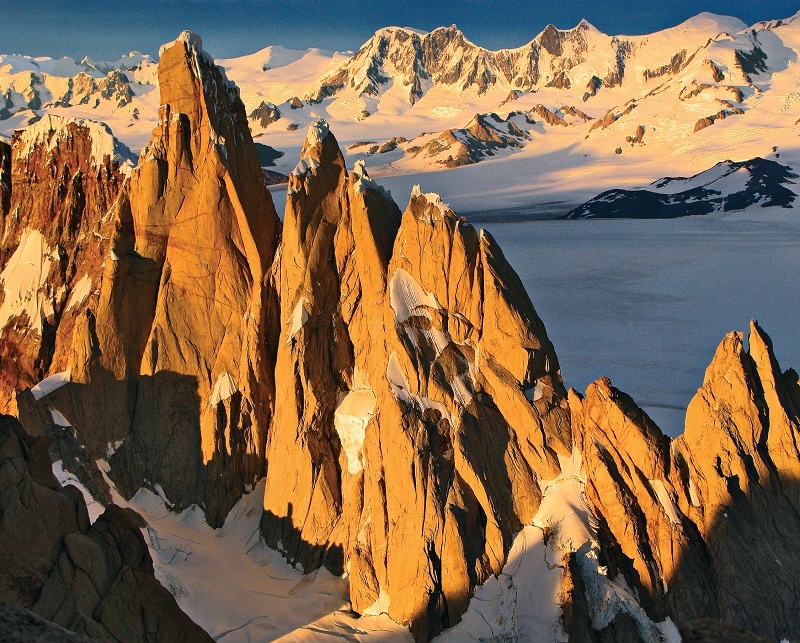 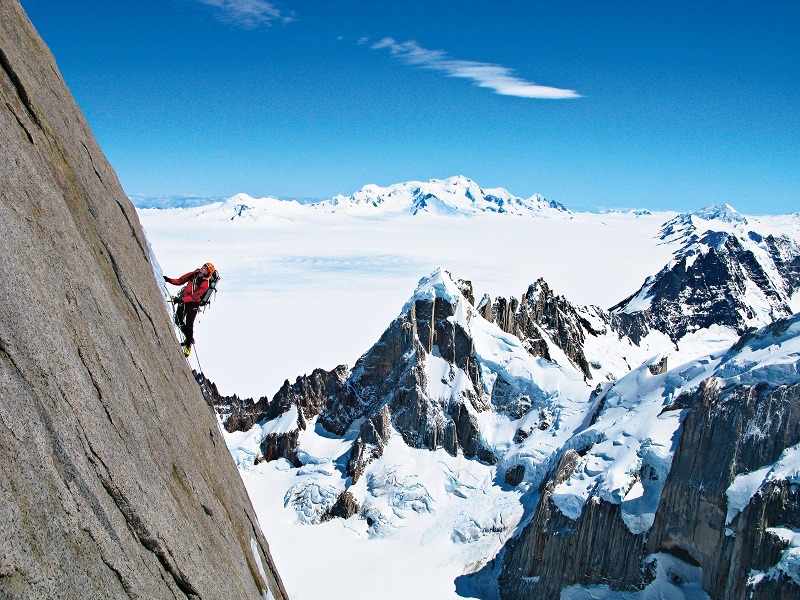 Day two, nearing the summit of the third peak of the four-peak Torre Traverse, Colin Haley follows the second pitch of the Huber-Schnarf route up the north ridge of Torre Egger. Fall 2008. Photo: Rolando Garibotti

The Season So Far

The 2015-16 season started “poorly” with a very wet December that brought a lot of snow. Because the temperatures have remained low, the snow has yet to melt, so rock climbing conditions are far from ideal.

In spite of this, Patagonia ambassador Colin Haley started the season with a bang. On the 31st of December he soloed the California Route on Cerro Fitz Roy, his second solo ascent of the peak, and the fifth solo ascent of the route. A week later, on January 6th, and together with Andy Wyatt, he smashed the Cerro Fitz Roy car-to-car record, completing it in 21:08. They started from the Río Eléctrico bridge at 3:40 a.m. and, climbing via the Supercanaleta, reached the summit at 11:14 a.m., returning to the trailhead by 7:23 p.m. They covered over 10,000 feet of vertical gain, of which 4,800 were climbing with difficulties up to 5.9 and AI5. This is the first time that Cerro Fitz Roy has been climbed in a day round-trip from town. The hardest part according to Colin was running from the edge of the glacier back to the trailhead with a pack full of climbing gear. With this ascent, Colin has climbed Cerro Fitz Roy ten different times. He is the first person to do so.

Tired legs today… Yesterday @ad_wyatt and I made an ascent of the Supercanaleta in 21:08 car-to-car (with no pre-cached gear), which I believe is the fastest car-to-car time on Chaltén to date. It’s merely a game, but it sure is fun! The one downside is Andy didn’t get to linger and soak up the view for his first time on Chaltén. My first time up Chaltén was in the 2005-2006 season with Mark Westman, and yesterday was my tenth ascent, making for a nice clean average of one ascent per year! 😀 @patagonia_climb @petzl_official @lasportivana #nosummitnoparty #vidapatagonia

There’s been a worrisome increase in accidents these last few seasons, with at least one serious incident during almost every good weather window. Beyond the tragedy this implies, because rescues are done on a volunteer and good Samaritan basis, at this pace, the pressure on the local community will soon become unsustainable. (Note too: The local rescue team has started charging of late, with the proceeds going to purchase insurance for the rescuers, equipment and pay for training, so it’s important that climbers come with their own rescue insurance.)

Climbing in a serious wilderness area requires that we choose objectives that correspond comfortably to our skill level and behave in a self-sufficient manner. The real difficulty of a climb is not the guidebook grade, but rather the range of eventualities that can occur during the ascent. Ask yourself honestly if you are able to deal with any scenario you might encounter during your climb; if in doubt, choose an easier objective. Although Patagonia is known as a “cutting-edge” climbing destination, there are numerous moderate alpine objectives involving easy snow climbing and scrambling that offer superb views of the massif. Cerros Madsen, Eléctrico, Solo and Mojón Rojo are some examples. Traverses around or through the massif, such as those around Cerro Fitz Roy via the Boquete del Piergiorgio, or around Cerro Torre via the Ice Cap, are also fine objectives. 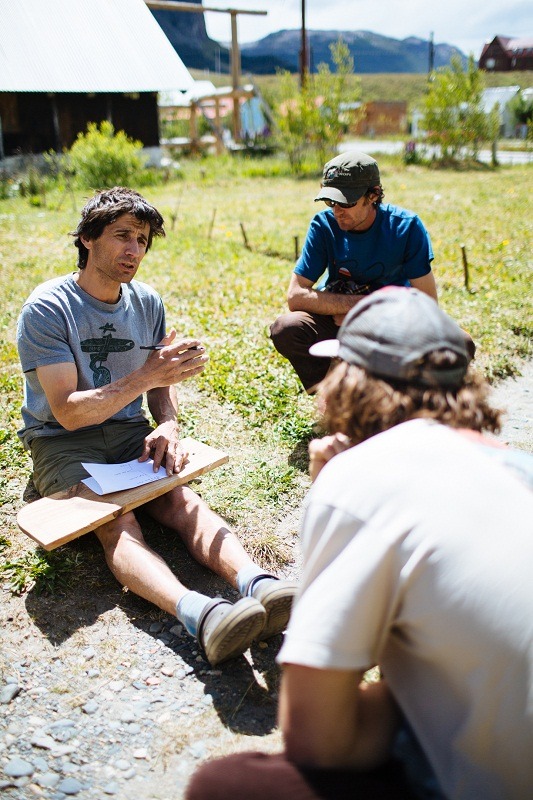 Changes on the Horizon

This past October, El Chaltén had its first mayoral election. Until now, the town has been managed by political appointees but won its right to an election when it surpassed 1,000 inhabitants. On election day, 877 people voted—a darn good turnout! Ricardo Sánchez, head of a local neighborhood party, Encuentro Vecinal, received 36% of the votes, more than double what anyone else got. Unfortunately, a very controversial law allowed a candidate who received 16% to win the election. He was able to add the votes from two other candidates, something that Encuentro Vecinal declined to do on principle. Even if the “winner” has a weak mandate because of the few votes he received, Chaltén now has an elected mayor, and the accountability this implies should yield positive changes.

Lastly, after 12 years in power, the Kirchner political movement recently lost the presidential election, so many changes are in store for Argentina. For now, prices are extremely high for visitors, especially lodging and groceries. Recently, the double exchange rate that was in place for the past few years was done away with so no longer do you have to bring wads of cash. Now you can take out money in ATM machines for the going rate. Just another thing to keep in mind if you’re planning a trip.

Be safe and have fun out there.

View photo updates from the Patagonia region all season long at patagonia.com/vidapatagonia. If you’re planning to make a climbing trip to the area, tag your photos with #VidaPatagonia to appear on the page.

The mountains have been Rolo’s safe haven since he was a kid growing up in northern Patagonia. He’s been climbing in Patagonia just shy of three decades, and though his passion has shifted over the years, spending time in nature continues to be the one constant that makes him content. He’s a guide, co-author of a guidebook to the area, Patagonia Vertical; and creator of the online climbing guide pataclimb.com. These days he splits his time between the town of El Chaltén in Argentina and the Dolomites in Italy.