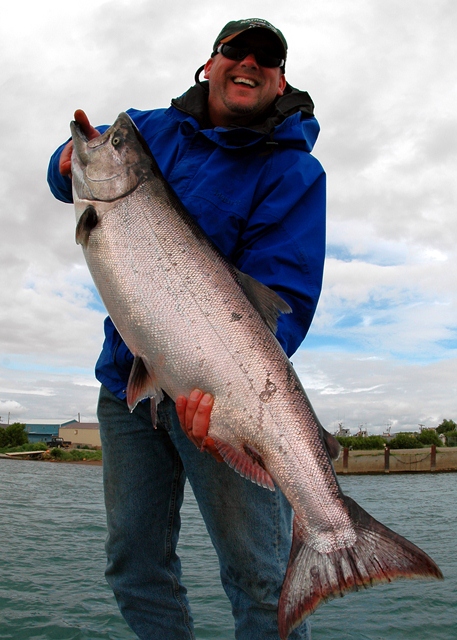 The early morning stillness is broken by a whining sound. I can barely detect it over the sound of the river whispering past. I re-set to cast and send the big black leech cross current to the far bank. I mend the line and settle in for the short drift. The light is too low to see the fish. I know they are there, though. The previous evening I had scouted. The far bank showed several rainbows two feet long or longer. Big fish. Healthy fish. Hungry fish. I’m actually a little chilled. It’s worth it, though. Later in the day other folks will arrive. I’ll be long gone by then, asleep in my tent. Getting up at 3AM is definitely worth it for the solitude and the chance to fish these big fish without worry of getting stepped on by other folks looking to do what I’m doing. So far I’ve hooked and lost four fish. In my mind, each fish larger than the last. The fish are athletic jumpers and managed to spit the big barbless black leech each time. And each time I’d curse my slow reaction time.

Again, I hear the whining noise. The early morning fog seems to attenuate the noise for a moment and then it’s gone again. I wade downstream to set up for a pocket against the far bank that showed several larger fish the previous day. These fish are large for a reason. They’re well fed. Extremely well fed. The bigger rainbows feed on the corpses and eggs of the dead sockeye salmon that are soon to accumulate here. The larger rainbows know that the smorgasbord is soon to start.

One hundred years ago, there was a massive volcanic eruption that completely annihilated this sockeye run. It was not the first eruption to do so. Just another fiery cataclysm in a long list of fiery cataclysms that have occurred in this region of Alaska for millennia. Each and every time the salmon would rebound.  And so they did this time. The ecosystem rebuilt and healed itself. The fish returned to the river. The only thing that didn’t return were people. The native people of Ketevik resettled in Naknek village and for a while the river lost its apex predator. Just for a while, though. It wasn’t long before the original apex predator had set up shop here. The coastal brown bear. This is what most people come here to see.

I come to this place every year around the same time. I come when the sockeye come.  And I’m not here for the fishing, really, although I sure do enjoy it. This is the altar I worship at. I’m here for the inspiration that arises from seeing something whole. Complete. Functioning as it should. A river serving only as a river. For all the massive destruction caused by the 1912 eruption of Novarupta volcano, it pales in comparison to the destruction we’ve visited on countless rivers throughout the nation. Pollution, dams, overfishing, exotic species introductions and a whole ton of ignorance are par for the course. Back in the northeast its one dead or dying river after another. The throne of the industrial revolution. Pundits will extol the virtues of renewable energy afforded by rivers.  For the most part once a dam goes in the ecological renewable part goes out. The wholeness is gone. Our view of rivers is much the same as the Church’s view of the universe in Galileo’s time: The sun revolved around the earth.  Rivers revolve around us.
But they don’t and should not.

Rivers, in large part, are not renewable resources but, yet, they are renewable. This river is proof of that.  It has literally risen from the ashes of one of the most powerful volcanic events in modern history.  And with that resurrection came all the other great things like one of the highest population densities of brown bear in the world.  I know we can restore most if not all of the ecological function to a river. I’ve seen it happen. I’ve worked on it for twenty years.  It can be done.  It must be done. Not for all the things I’ve mentioned here but for all the things I’ve not mentioned. The things I don’t know. The connections not made or understood. Simply because you don’t understand something does not mean it isn’t critically important.

What is that damn noise? I’ve shifted further downstream and now the noise is continuous.  Like a mosquito tethered to your ear. The fog drifts among the black spruce trees.  A harlequin duck whizzes past me headed up river. The other creatures of the river are coming to life as the brief arctic night looses its battle with the sun. Now curiosity has me in its grip. The noise is foreign to this place. I continue to wade downstream and as I do the noise becomes clearer.  Bag pipes. Some fool is playing bag pipes at 4 in the morning or a record of bag pipes but no doubt there are bag pipes playing. I continue to wade and roll cast but I’m no longer really fishing. I’m migrating to find the source of the noise.

Perched above the river is a viewing platform. A safe haven for bear viewing. From this perch visitors can watch the bears in their timeless pursuit of food. Except this morning.  This morning the platform is occupied by a single person. Pacing back and forth with the mist as a backdrop is a lone piper. I reel in and wade out of the river actually relieved to know I’m not hearing things. The piper continues to play as I ascend the viewing platform.  I take a seat and watch as he finishes the tune. I clap and say, “Do you know why pipers walk when they play?” He raises an eyebrow in response and I answer, “To get away from the goddamned noise!”

Take a look at his profile, and four other dam busters.
Running Free
The Dawn of Dam Removal
Explosive
Longhorn Wisdom
River of Sand

Nate Gray has served as a Fisheries Scientist for the Maine Department of Marine Resources for twenty years.