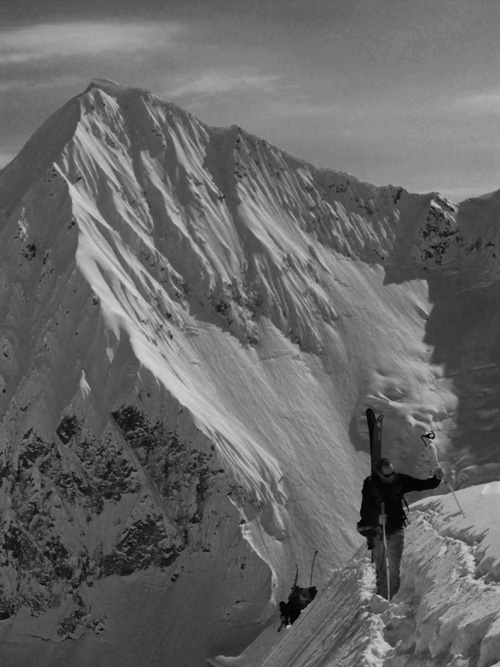 27 miles outside of Haines, Alaska.
I am sitting in a lawn chair perched outside our rental house. I am wearing surf trunks and sunning my pasty white chest after a long winter season. There are smooth river rocks beneath my bare feet. The white strips of snow on the South facing mountains littering my vista are turning earthy brown before my eyes. While all the signs of seasonal change are afoot, you still can't smell the thawing earth, and as far as I am concerned, that's the benchmark of spring.

Editor's note: As ski season winds down (I know some of you are still making turns out there) we present a story from Patagonia skiing ambassador Stephan Drake. For more from Stephan, check out his film Before Cloudmachine in the Tin Shed.

It's all said and done now – we are just waiting on yet another truck part before starting our yearly migration south to the lower forty-eight. Swedish photographer Oskar Enander and I are the last men standing, and we have been marooned for a week waiting for said truck part du jour which is rumored to be flown in tomorrow morning.
Somewhere down the road, another existence awaits us. Somewhere past the Yukon's tightly spaced pines, somewhere past the bison, caribou, and big-horned sheep, and somewhere past the vast, long open spaces awaits a messy traffic jam, and the hunt for parking spaces. Somewhere down the road are reunions with friends, families, and lovers, and a laundry list of stuff to do.

As I reflect back on my fourth spring season of ski exploration outside of Haines, Alaska, it's bittersweet. The broken truck that is currently keeping us off the road is a nice little metaphor for a 2010 season that will go down infamously as the "Year of the Great Magnet."

A few weeks ago, I was dropping off some friends at the local airstrip, and struck up a conversation with a local who was also seeing a friend off. He was an ancient; he sported soft eyes and a soft voice, a blue ball cap, and a curly white beard that drooped all the way to his belt line. He told me tales of how much more it used to snow in the town of Haines back in the 1950s and 1960s. Given the already obscene amount of snow in the mountains above town these days, it was boggling to hear about an era where twenty-foot snowbanks ruled town into the month of May. These days, the town of Haines, which sits at sea level, rarely sees any significant lasting accumulation of snow past the month of February. The loaded spines in the mountains outside of Haines are voluptuously deep – in fact, the best on the planet. Snowfall discussions, while always fascinating, are a red herring. 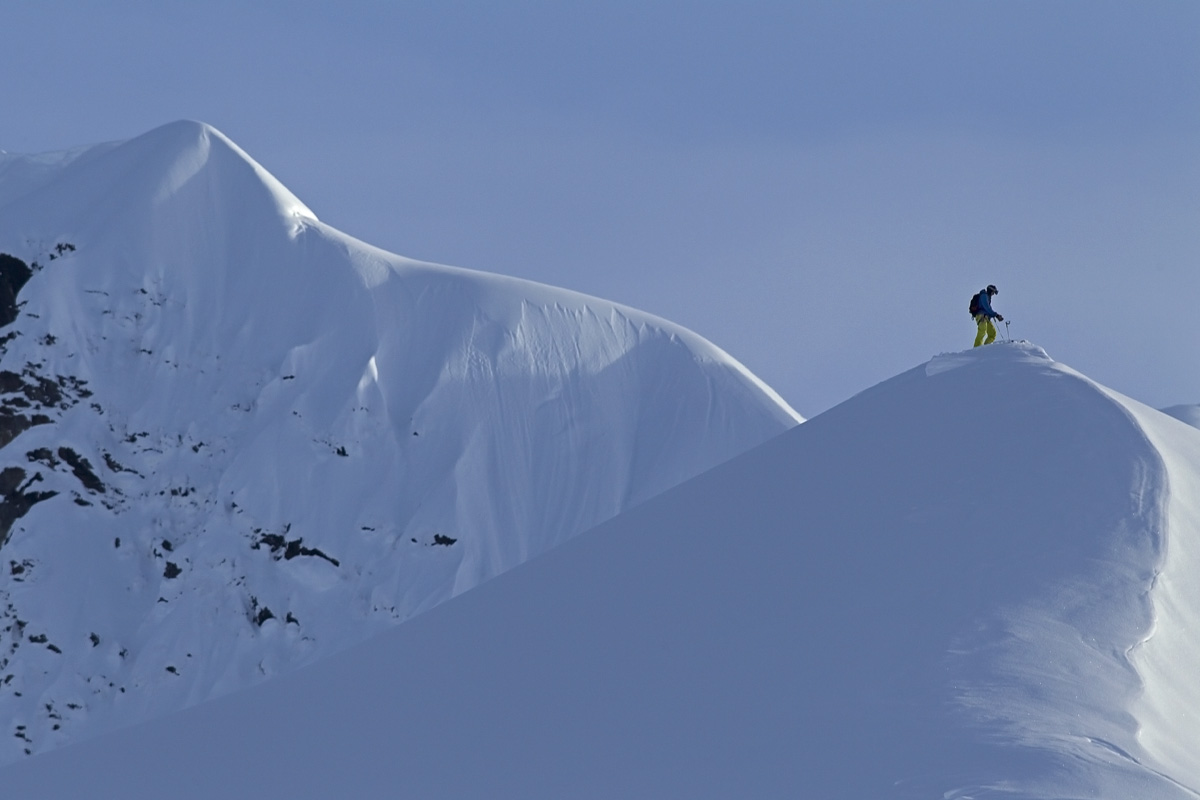 [Stephan Drake atop the Playground, ready to drop in on
for a evening session. Photo: Oskar Enander] 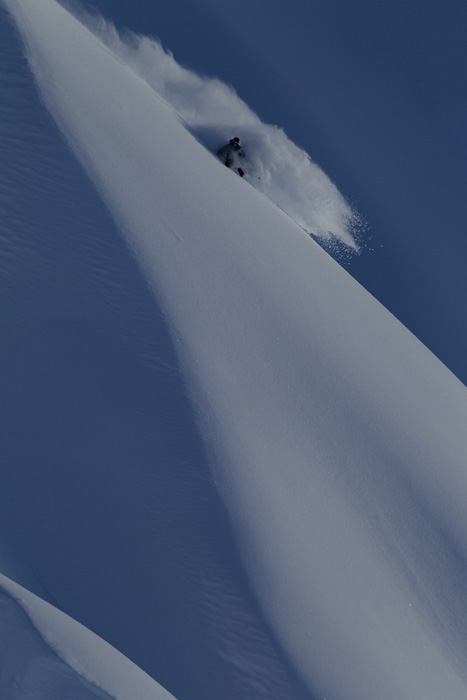 Back to the Great Magnet. The ancient went on to tell me that Haines has an unusual concentration of iron ore beneath it. He claimed that the Chilkat River Valley is a highly magnetized geological zone, and that I will weigh more in Haines than anywhere else on earth. I jumped on the airport scale to check it out. While watching the numbers pop up, and trying to calculate the derivative influence of the local carrot cake at the Mountain Market, I thought back to how my ski partner for this trip, Jon Larsson, was so disappointed when his shiny new compass from REI didn't work when he unpacked it a few weeks earlier. Logic took hold in a moment of Eurekea!: there was finally a very logical and plausible explanation as to why, over the previous month, we had broken nearly every piece of gear our crew owned. The Great Magnet had honed in on our expedition and was responsible for tearing it apart. 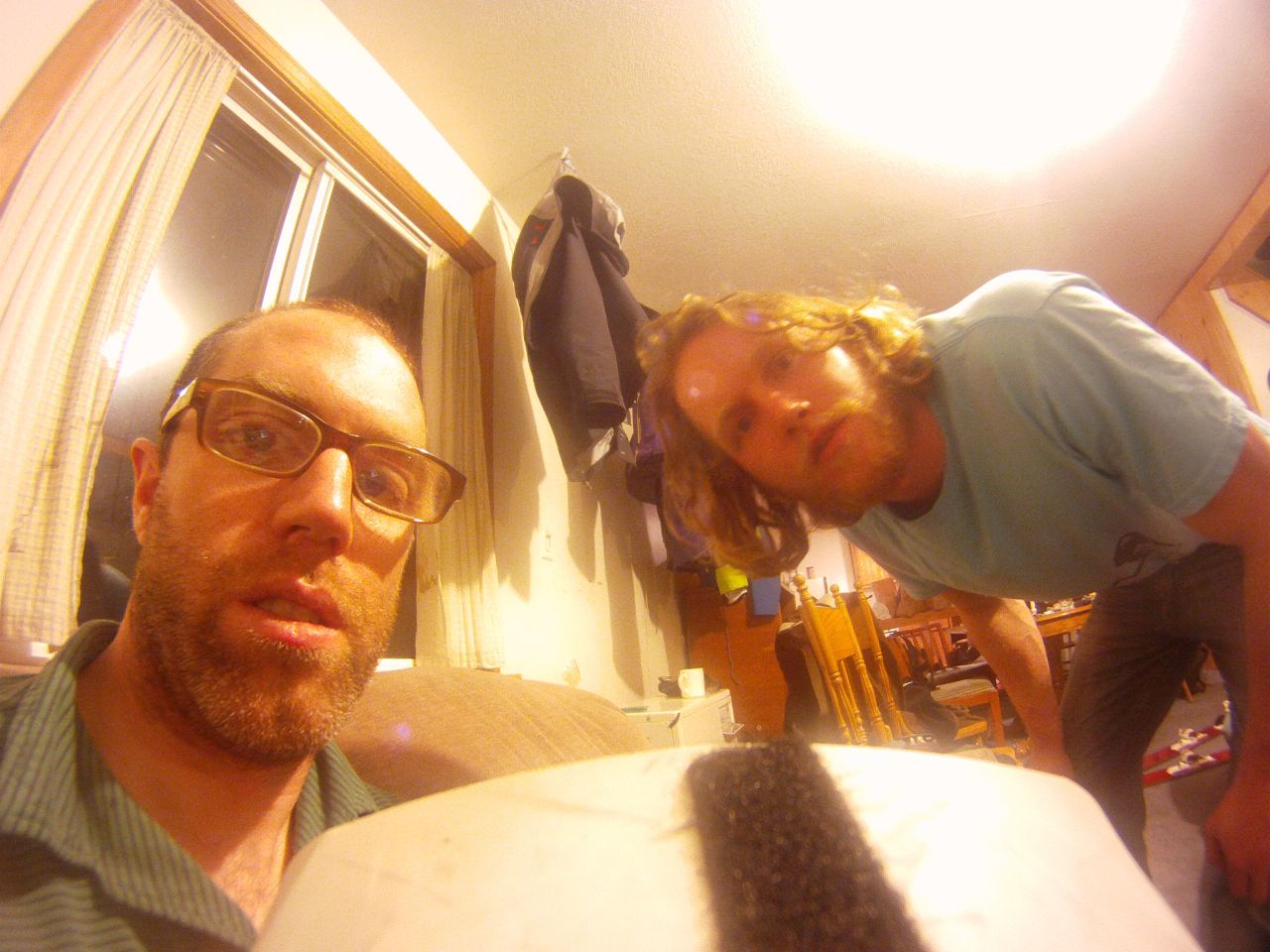 And that's the Cliff Notes version of our 2010 season, skiing out of Haines – we were dominated by the Great Iron Magnet, a force so strong that it consistently foiled our best efforts to accomplish our goals. While I can't quite blame the first two weeks of bad weather on the Magnet (or maybe I can), the Magnet broke virtually all the gear that kept us out of the mountains on some key days with prime conditions. The Magnet was also surely responsible for me rag dolling down 1,000 feet of Alaskan spines toward the end of the trip – a fall that would end my trip two weeks early. Ultimately, we got a brief taste of the nectar this year, but the Magnet cruely left us craving more.

The Great Magnet works both ways though; what it repels, it also attracts. The siren call of the mountains that skirt the border between Alaska and Canada at 59 degrees of latitude have an undeniably deep pull on my soul. The few sweet afternoon spine sessions we had in perfect snow and perfect light were enough to wildly intoxicate me to the point that I am already planning next year's venture. As a skier who has spent the last decade exploring the globe for the perfect combination of terrain and snow, there isn't a place I have found that rivals this magical zone. It's a veritable fairytale where insanely steep mountains meet coastal weather and arctic air – a rare alchemy that makes the world's other storied ski locations seem dry, rocky, and uninteresting. 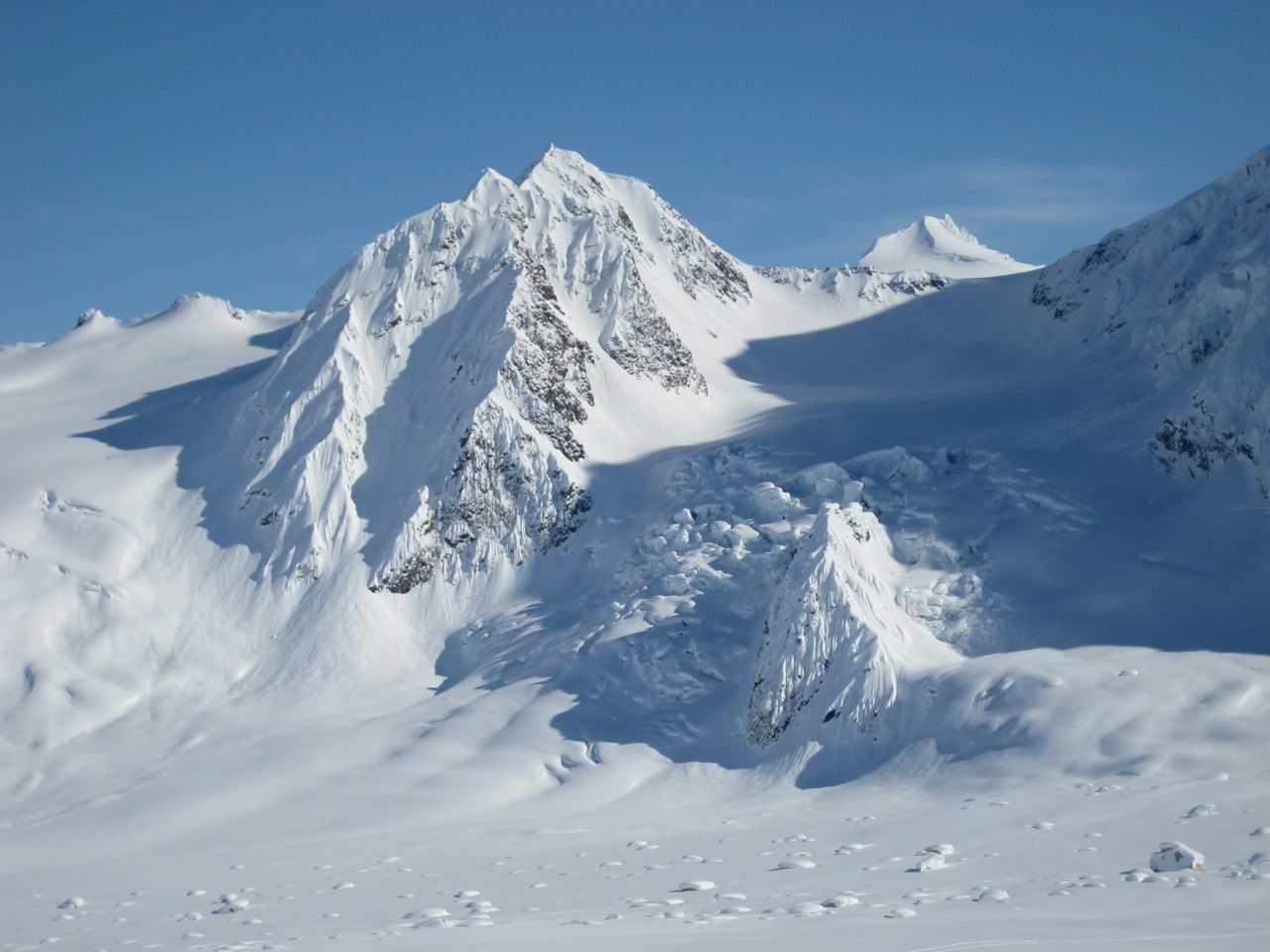 The road beckons. Motels and apartments will soon replace snowcaves. Wild roaming in fearsome mountains will soon turn to more civilized pursuits, but the clock for next year starts ticking now. I feel like a child who just finished Christmas and begins to countdown the days it will take for Christmas to come again. Once you have tasted the call of surfing steep Alaskan spines, it becomes a pinnacle experience that dominates the year, and in this case, my whole life. In the coming months, there will be sacrifices made in relationships, pocketbooks, and schedules, just so that next season, at the same time, in this same magical place, I will have a chance to wander free again amongst these peaks. 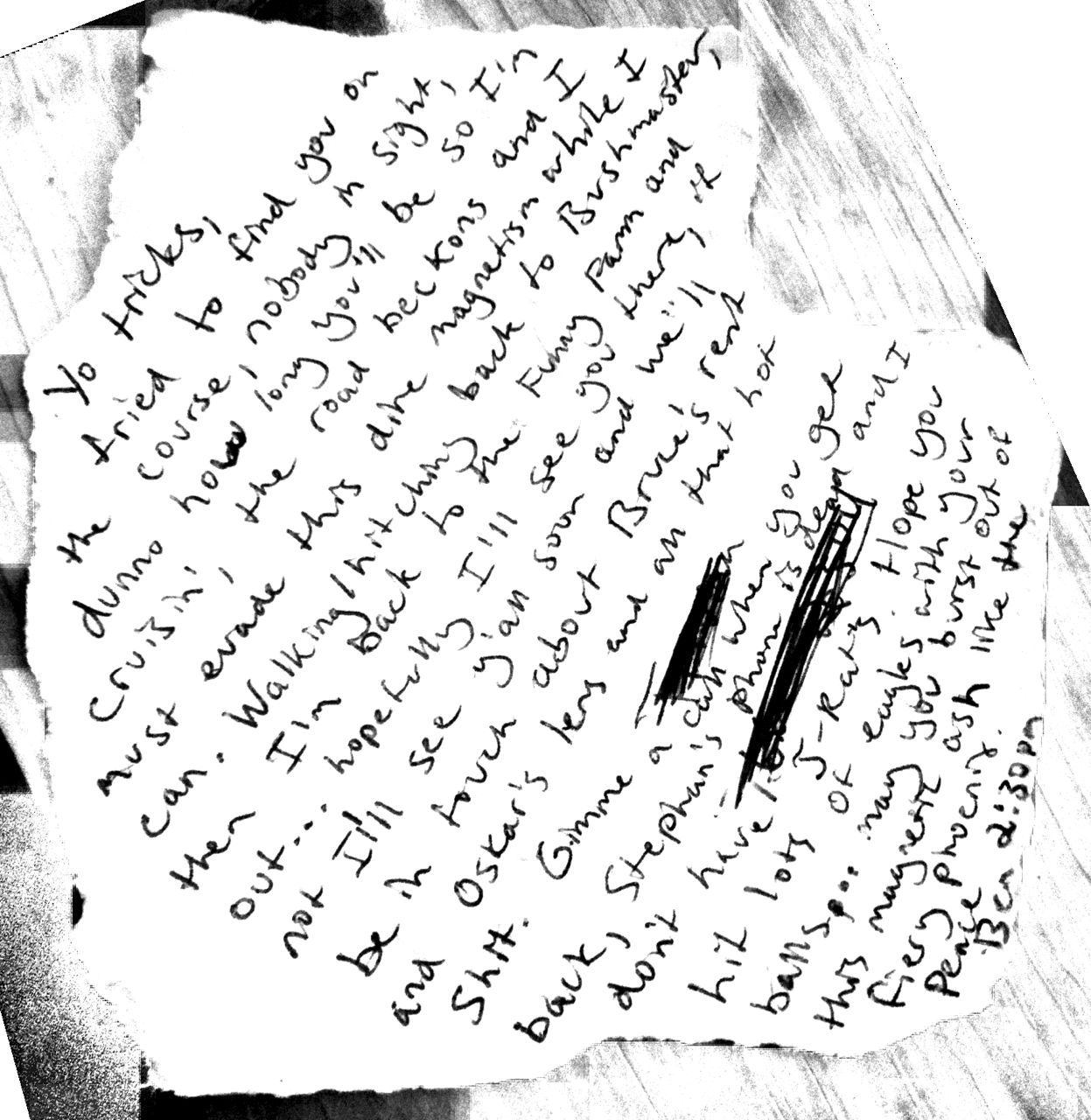