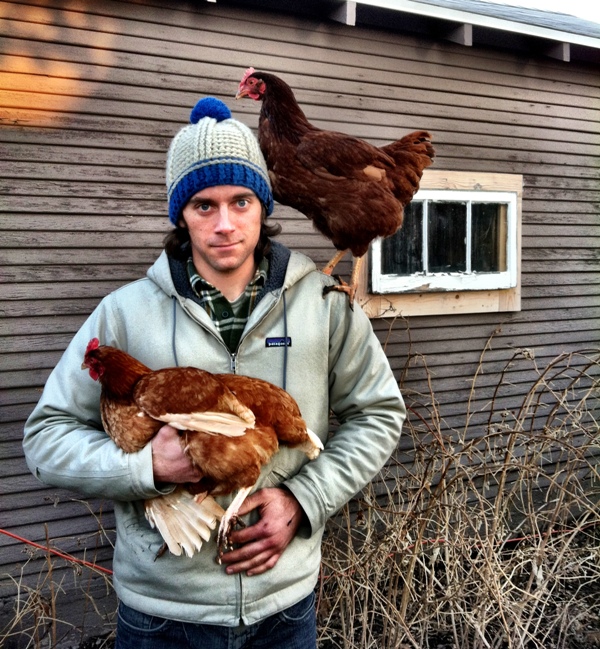 Here’s a recipe that every dirtbag should learn to make; it’s exotic sounding, yet relatively simple to make from basic, easy-to-find ingredients. Also, since it requires nothing much more than a fry pan, spatula, bowl, and plate, this one can be made in your van or campsite.

I first became familiar with the ubiquitous Spanish omelet (aka, Tortilla Español) on a climbing trip to Spain (surprise, surprise). This delicious, versatile, Spanish staple was offered in nearly every tapas bar we experienced. They even sell them in the grocery stores, sealed in plastic wrap. Tortilla Españols quickly became essential crag food since they pack easily, have lots of protein and can be enjoyed warm or room temperature.

I’m going to use my climber friend, Andy, as my subject for the following reasons:

1. He’s a dude, and, like our young friend Hayden from the Secret Weapon, is always looking for a way to impress the ladies with his cooking.
2. He actually has his own chickens in downtown SLC and provided the eggs for the recipe (impressive, right ladies?)
3. I love men in aprons.

With only FIVE ingredients, this recipe has fewer ingredients than what goes into most Portlandian’s coffee drinks. 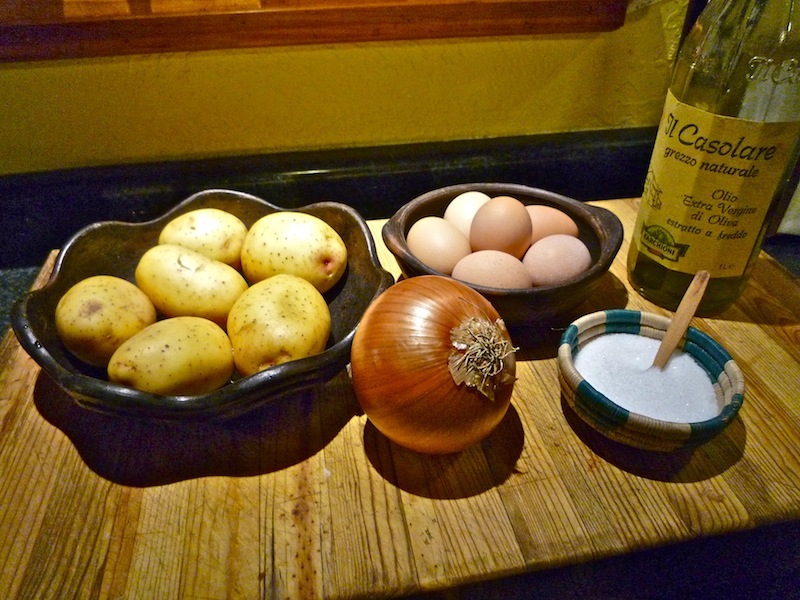 Step 1. Slice the potatoes into 1/8″ thick pieces. A real Spaniard will probably tell you to peel them, but I’m kinda lazy when it comes to that, and besides, my mom always told me that the skin is where all the vitamins are (maybe she was lazy, too, come to think of it…). A knife works just fine for this, but another option is to use a mandolin. I found a cheap plastic one at the Korean grocery around the corner from my house. Be careful, though, the blade is sharp as shit and finding a fingertip in your tortilla is gross. Plus, you won’t be climbing for a few days… so it’s best to perform this part of the prep before you pop open that nice bottle of Rioja. 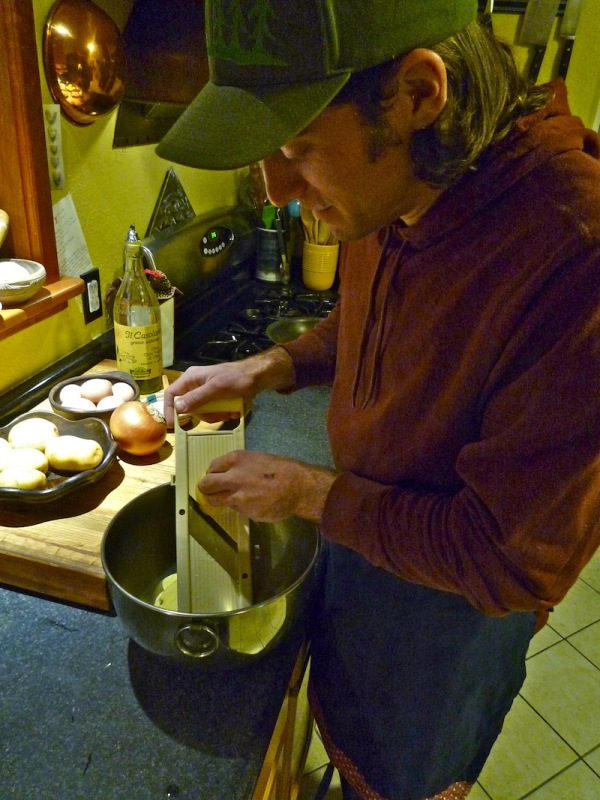 Step 2. Mix about 2-3 tablespoons of salt into the sliced potatoes. Let sit for about 10 minutes then drain the extracted liquid from the potatoes.

Step 3. Heat 2-3 cups of olive oil (do not use any other oil… it is considered a sin in Spain to do so) on medium-high heat in a skillet. Ideally, you need a non-stick pan. (Yes, I know that non-stick is supposed to be bad for you, but honestly, the air quality in SLC will kill me before a non-stick pan is going to.) I have cooked a Tortilla Español in an extremely well-seasoned cast iron, but it’s a little cruxier.

Step 4. Chop the onion into 1/4″ pieces and add to drained potatoes.

Step 5. Add the potato and onion mixture to the heated olive oil. The oil should almost cover the potatoes. If it doesn’t, add more oil. Don’t freak out about how much oil you are using, most of it gets drained off (I’m so frugal [thanks, mom] that I put the used oil in a glass jar and re-use it). I learned a new usage for the Spanish verb revolver while investigating this recipe: it can mean “to move”… so “move” your potatoes and onions constantly to keep them from burning, browning or forming a cake-like mass. How long do you have to revolver? At least 10 minutes (this is the time to have your glass of Rioja within reach). When you can poke a piece of potato and it easily breaks in two, the potatoes are done. Don’t rush it! Remove the potato/onion mixture from the pan with a slotted spoon or spatula, allowing excess oil to drain. Let cool a little.

Step 6. Crack the eggs into a large mixing bowl and beat by hand. Dump in the potato/onion mixture. Mix together with a large spoon. I like to then let this mixture sit for about 10 minutes.

Step 7. Pour the oil from the fry pan into a jar and save so you can reuse it later (e.g. season a cast-iron skillet, put in your bath water or rub into your tips after a big session of plastic tugging at the climbing gym – seriously). Lightly wipe out the pan with a paper towel. Reheat pan on high. This is where some cooks deviate in methods. My theory is that when the eggs are poured into a super hot pan they coagulate immediately before they have time to fill the tiny pores in the pan and stick to it (I’m not a scientist, but I play one in this blog). So I keep the heat on high for about a minute, then turn it down to medium-low. Let cook until the inside sets.

Step 8. The crux: flipping your Tortilla Español. It’s ready to flip when the outside is cooked but the very middle is still gooey. Gently release the edges with your spatula and shake. It should slide around in the pan as a whole unit. Refer to the sequence of photos below for the proper flipping technique. 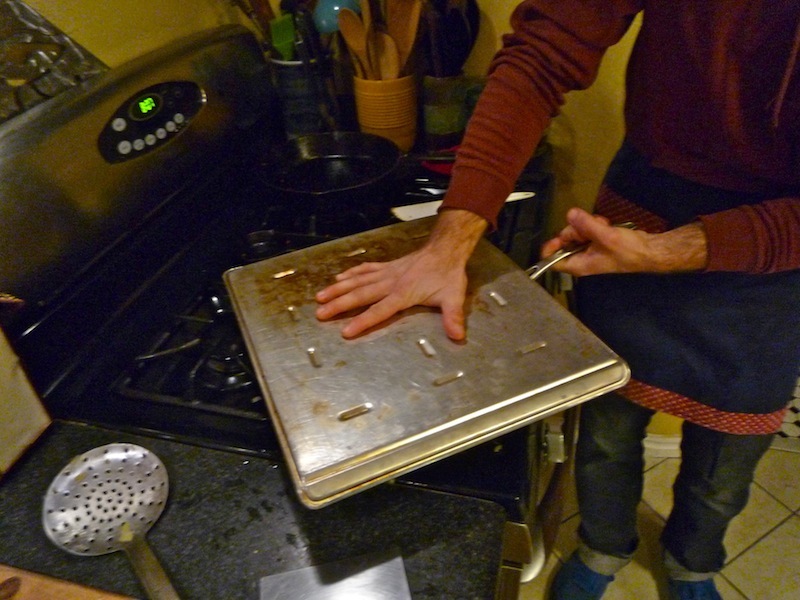 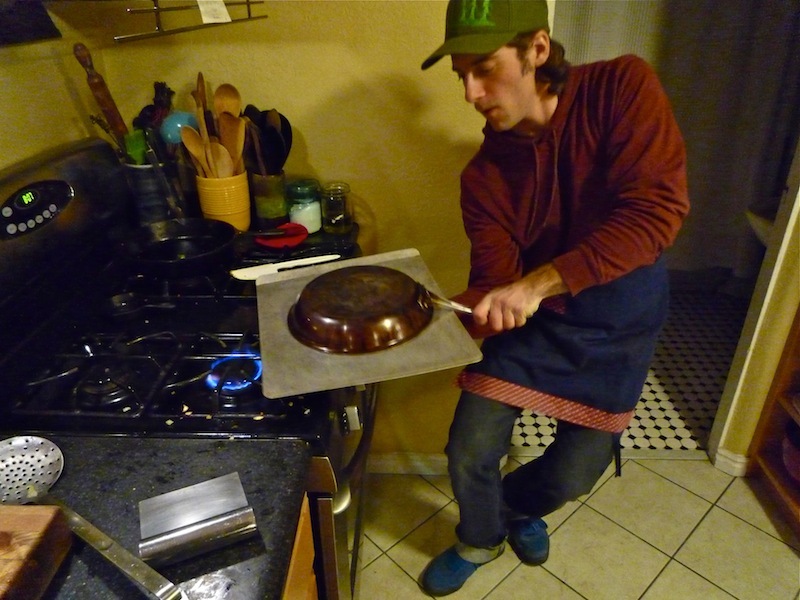 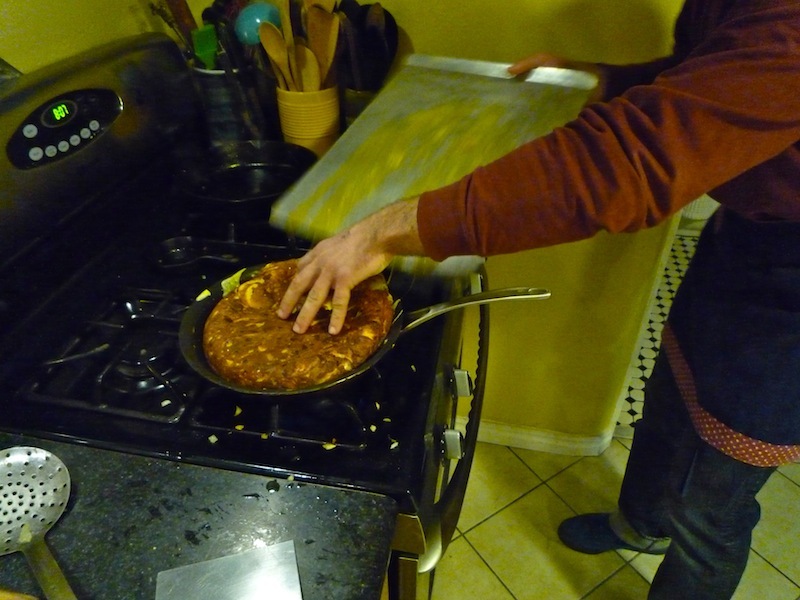 In Spain, there are special plates whose sole purpose is to flip tortillas, but I just use a rimless cookie sheet. If you don’t have a cookie sheet, just try to use the flattest plate you have.

Step 9. Once flipped, put the Tortilla Español back on the burner (at the same medium-low temp), give it a few minutes to set and then press down on it with the spatula to check the doneness. It should be cooked all the way through after about five minutes.

Depending on how you want to serve it, you can cut it into pie-shaped pieces, or I have also served the Tortilla Español as an appetizer and cut it up into 2″ squares. This night we made a Romesco sauce and served that on top, but it’s also delicious plain. If there are leftovers, they can be eaten for breakfast, lunch or taken to the crag.