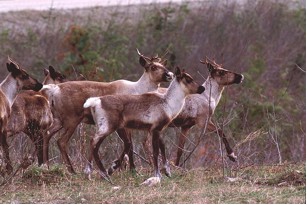 Last year, six groups of Patagonia employees ventured out to explore, document, and help protect various wildlife corridors in the U.S. Among those groups were Dave Campbell and Andrew Marshall, who travelled north in hopes of spotting caribou along the corridor located in the lush region of southeast British Columbia.

These citizen-naturalists were participants in Witness for Wildlife, a Freedom to Roam initiative.  As a co-founder of Freedom to Roam, Patagonia has, for three years, supported efforts to protect the critical wildways that animals must have to move and survive in the face of pressure from human development and climate change. Witness for Wildlife needs more volunteers dedicated to chronicling and protecting wildlife corridors – visit www.witnessforwildlife.org to become a citizen naturalist, and read the following story by Patagonia employee Dave Campbell to get inspired.

Last spring Patagonia’s environmental department announced that they’d pulled together funding to sponsor select employee groups to travel to and document critical, at-risk wildlife corridors within North America, as part of the Witness For Wildlife and Freedom To Roam campaigns. Coworker Andrew Marshall and I took interest in the endangered mountain caribou corridor of the Selkirk Mountains of B.C. and after an extensive amount of research, we found ourselves on the road headed north.

Andrew and I identified a low elevation old-growth cedar forest deep inside the Goat Range Provincial Park and decided to access it via Wilson Creek. The weather was clear when we parked and while hiking up a two-track paralleling lower Wilson Creek it almost seemed like we were in for a smooth outing. However, within a half hour we encountered a large mass of wood debris where a bridge used to be at the first tributary, and after a messy crossing we were unsuccessful at finding a trail on the other side.

Nevertheless, we tightened our boots and began thrashing through the dense forest, always staying within hearing distance of Wilson Creek. Occasionally we’d stumble across a game/foot trail, though never any human footprints. We did see many large double crescent-shaped hoof tracks and piles of partly digested lichen scat, both of which we presumed were from mountain caribou. The Goat Range is also home to the mystical white grizzly; this detail kept us on our toes. 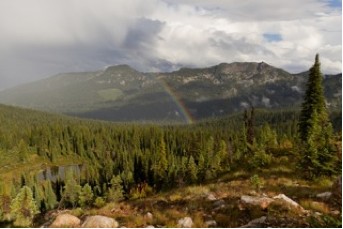 Well, I didn’t end up seeing a mountain caribou or a grizzly, though I quietly sat there for 3 or 4 more hours until satisfied. Traveling through British Colombia reminded me that there is a magic in the woods, and that the older we get, the more it shrinks. Part of it is our perception as we age, though it's also because many critical natural habitats are rapidly shrinking by the minute. I wish that I could say that mountain caribou are like missing cars keys, in that if we stop looking, we'll find them. Unfortunately it’s not that simple.

For another take on the BC trip and other story postings check out: http://www.witnessforwildlife.org/patagonia/story.php?id=8

Anxious to spend some time in the great outdoors? Go to the Witness for Wildlife site to scope out volunteer options.